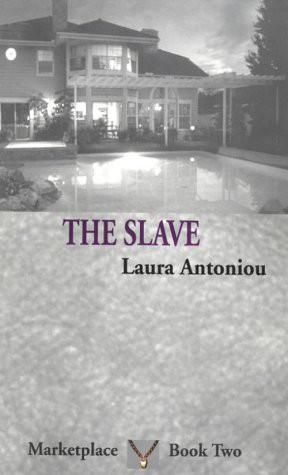 an imprint of Circlet Press, Inc.

The Slave by Laura Antoniou

An earlier edition was published by
Masquerade Books in 1994 and a second edition by Mystic Rose Books
in 2001.

Published by Luster Editions, an imprint
of

Please do not support online piracy of
copyrighted works. This ebook is licensed for the personal
enjoyment of the purchaser only. This ebook may not be re-sold or
given away to other people. If you would like to share this book
with another person, please purchase an additional copy for each
person you share it with. If you’re reading this book and did not
purchase it, or it was not purchased for your use only, then you
should return to Smashwords.com and purchase your own copy.
Additional copies of this ebook may be purchased through the Amazon
Kindle Store, Fictionwise, Barnes & Noble.com, Scribd,
Smashwords, All Romance eBooks, and many other online sites, as
well as from the publisher’s own site at circlet.com.

The traffic in the streets below the hotel
echoed upw
ard, pushing
through the window, which was cracked open for fresh air. The city
was restless; the pulse of the weekend had reached its frenzy. The
customized horn of a wedding limousine blared out the identity of
the newlyweds that the dark-haired woman had passed in the lobby.
The sound made her want to jump, but she held herself still with
practiced tension.

The man sitting in the high-backed chair
paid no attention to the tacky sound of the horn, or to her for
that matter. His eyes were busy scanning the papers in front of
him, turning them over in patient, careful movements that didn’t
betray the slightest interest in their contents.

The urge to speak, to cough, to
shift her body into a more relaxed position, to pour a glass of
water from the sweating pitcher on the room service tray, all hit
Robin at once. She had been standing still since she handed the
file to him; he didn’t seem to notice. She pushed all the thoughts
aside with an almost angry strength.
I will be patient
, she chanted inwardly.
I am
patience.

“
Why don’t you make yourself
comfortable?” His voice was a rough tenor, a singer after a
grueling concert, a student at four a.m. It was also loud; it broke
the silence and Robin’s efforts to be calm.

“
Please,” Robin said. Her own voice
shook, almost imperceptibly. When the man looked up, she swallowed
hard and continued, “I’m unsure of the proper courtesy to show you,
sir.”

He nodded. “Very nice. Why don’t you sit
down on the couch for now? It’s already been a long night.”

Robin nodded and sat, smoothing her skirt
neatly down her lap. Sitting made it easier to relax into a more
proper attitude. She took a long, softly casual look at her
inquisitor.

He was older than she, but had the kind of
face that refused to betray its years. His short, black hair was
very thick, and showed a slight tendency to curl, but was trimmed
back so severely that Robin knew he would get it cut again soon. A
sparse mustache and the vaguest of five o’clock shadows gave him a
scholarly look, or, as she remembered in the dim light of the bar
last night, the look of a terrorist. He wore tinted glasses in
heavy steel frames. Today, he was dressed in a crisply clean,
long-sleeved shirt and a muted tie. His jacket was draped across
the arm of the other chair in the sitting room.

There was no sign of the leather jacket he
had been wearing last night.

He finished with the papers and stowed them
neatly back into their folder. Then he sat in silence, until Robin
began to imagine that she could hear the swishing sound of the
second hand on her watch. The silence was as oppressive as any
heavy hand she had ever felt. She wanted to bend to it. For a brief
moment, to her horror, a flush of shame and thrill passed over her,
as clear to her interviewer as the strident horns of the taxis
below.

The corner of his mouth rose in a twitch of
a smile.

“
You’re very good,” he said, leaning
over to retrieve his jacket. “Tell me what your instinct was
telling you to do.”

Robin’s mouth went dry. She licked her lips
and coughed a little to clear her throat. “I wanted to kneel,” she
whispered.

“
I know that. But there’s more.” He
pulled a cigarette box from one pocket and snapped it
open.

“
I wanted to make obeisance at your
feet.” Robin’s voice was still at a whisper. Her blush fairly
glowed.

“
Show me how you were trained to do
that,” the man said, leaning back into his chair.

Robin rose, quickly but without any jerky
movements. In two steps, she was in front of him, but still outside
of arm’s reach. With grace, she knelt, lowering her body to the
carpet, and then continued the movement seamlessly until her
forehead brushed the fibers. She could smell the chemical scent of
the cleaners. It struggled with the richer scent of the well worn,
polished leather boots now within her reach. She held perfectly
still.

“
You may,” came the voice from above.
The man sounded faint, his tones overrun by the pounding in Robin’s
ears. She raised her head a few inches and placed one careful, soft
kiss on each boot, firm enough to let him feel her presence, light
enough not to leave the faintest smudge of her lips. Then, she
retreated back and lowered her head again.

She rose up to her knees and looked at him,
her eyes meeting his. “Thank you.”

“
Oh, you’re quite welcome.” As she sat
down again, he lit a cigarette. “Do you smoke?”

Robin leaned forward, her heart pounding.
“Does that mean that you’re accepting me?”

“
Yes. Your records are acceptable,
your spotter is well known to me, and your behavior is impeccable.
I just wanted you to realize that when you enter the Marketplace,
you are not permitted to retain any addictions.” He smiled
suddenly. “Except of course, for the obvious one.”

She smiled back despite the echoes of panic
which resounded in her. “The addiction to submission?”

“
To being owned, yes. That’s a
prerequisite. We weren’t formally introduced last night. I am Chris
Parker.”

“
Thank you,” Robin said politely. “I’m
sure you know all about me now.”

“
What, this?” He waved his hand over
the folder. “No, that doesn’t tell me much about you. It tells me
how you’ve experienced some minor forms of service, which is
helpful, but it couldn’t possibly tell me anything about how
genuine your devotion is, or how serious you are about a potential
commitment, or how profound your need for this kind of life is.
Those things I can only learn from you. I will need to test you
some more, and to train you in the specific areas of behavior and
service that I require any client of mine to possess before I
present them for sale.”

Client!
Robin swallowed hard.
When they called me
a slave, I wasn’t, and now that I am, they don’t call me
one.
She
resisted the urge to giggle, but her shoulders relaxed just a
little bit more.

“
I would love to have the opportunity
to show you my dedication.” Robin’s eyes danced. “These are things
I’ve been thinking about for years. No, not only thinking about,
but dreaming about. Trying to do, in some way or another. This is
something I’ve wanted all my life.”

“
All your life? That’s impressive.
Tell me.” Chris flicked ashes into the glass ashtray beside
him.

“
Everything? From the
beginning?”

“
That’s the traditional place to start
a story.”

Robin frowned for a moment,
considering.
Where do I begin
, she wondered.
What is the real beginning here? When I
was little? Those games we used to play? Or when I first realized
what power the fantasies had? Or with Maria? Or Troy?

“
I’m sorry,” she said softly, suddenly
aware of time moving around her. Parker hadn’t moved an inch,
except to bring the cigarette up and down again.

“
I’m so excited... so, relieved, I
guess. But scared, too. This is turning out to be harder than I
thought.”

“
I won’t tell you to relax,” Chris
said with a slight smile. “But you shouldn’t be trying to impress
me with your story. I’m much more interested in the things you
remember as important.”

“
But I remember everything,” Robin
laughed. “And I’m not sure what’s important. I mean... it all was.
And... and... nothing was.” She took a deep breath, trying to
remain calm. “I’m sorry. Now that I have a real chance, suddenly
I’m nervous.”

“
Naturally. It’s all right to be
nervous.” Chris ground the stub of his cigarette into the glass,
twisting it down until the last sliver of smoke vanished. “Tell me
about your first sexual experience as an adult, if that makes it
simpler.”

Robin nodded gratefully.
“That’s easy. But you’ll laugh.” When Chris remained silent, she
blushed again and lowered her head.
Everything depends on this
interview
,
she reminded herself.
He’s accepted me for now, but I can still mess
things up. I have to be perfect.

“
Sure, baby, right in my pocket.” Greg
Carneson, basketball player, drummer, and communications major,
patted his hip pocket with a knowing chuckle. “I wasn’t going to
forget. I mean, how could I? With you writin’ it down and
everything. That was a nice letter, babe. No one ever wrote me
nothin’ like that before.” He grinned and shifted his knapsack onto
one shoulder. “I wish we had a nicer place to go,
though.”

Sleight of Hand by CJ Lyons
Stones in the Road by Nick Wilgus
The Lemon Book - Natural Recipes and Preparations by Alexandra Végant
War by Edward Cline
I Hear Voices by Gail Koger
Razing Pel by A.L. Svartz
The Word of a Liar by Beauchamp, Sally
Fixin’ Tyrone by Walker, Keith Thomas
Independence: #4 Hayley by Karen Nichols
The Devil in Amber by Mark Gatiss