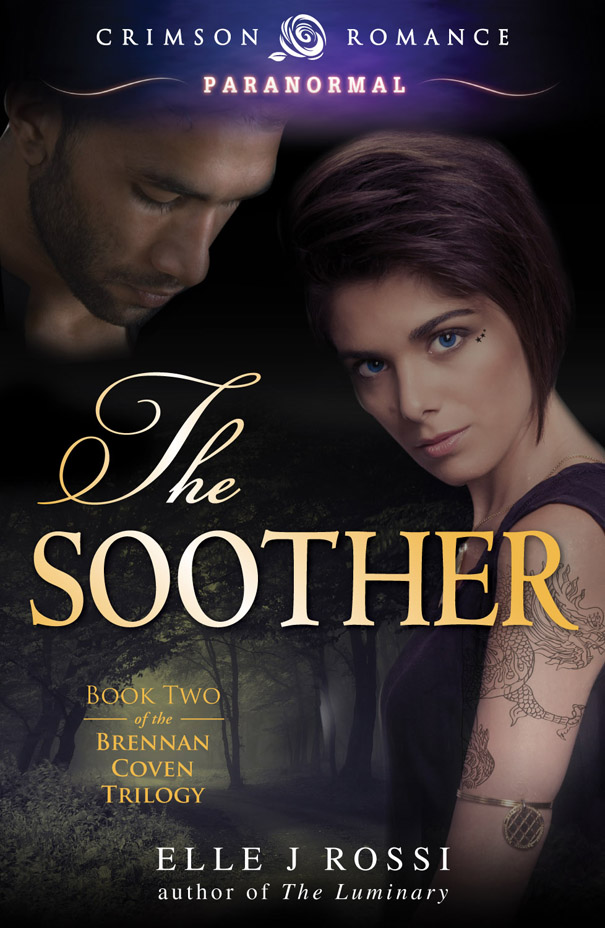 A WITCH WITH THE GIFT OF LIGHT

Calliope the Soother is a witch devoting her life to easing the pain and misery of others, drawing out the darkness and replacing it with light.

A HALF-BREED WITH THE CURSE OF DARKNESS

A powerful wizard by birthright, Krystoff Dubhar’s tainted blood carries shadows destined to possess his mind and soul. Only with outlawed, dangerous blood magick can he hold the shadows at bay.

HIS SHADOWS WEAKEN HER

In the shadowed realm of Mistropa, Krystoff falls to overwhelming odds. Just as the Queen of Shadows is about to claim his power—and his life, Calliope hears the foreboding cry of the banshee, and the Soother becomes the wizard’s savior. As Calliope heals her mysterious fanged enemy, her heart is sent into overdrive. Is her accelerated pulse prompted by fear or desire? Either way, Krystoff's shadowed presence proves dangerous. His sensual words ignite a fire long held dormant. His kiss reveals a forbidden passion.

HIS HUNGER MAY VERY WELL KILL HER

Seeking vengeance, the Queen’s dark army turns the Soother’s village into a battleground rife with death and destruction. Calliope fights to save her coven. Krystoff fights to save the Soother who has captured his heart. One bite changes everything. Can love survive the never-ending battle between light and dark?

The Soother
Elle J Rossi
Author of
The Luminary

For Brenda. Simply because I love you.

More From This Author

I am incredibly fortunate and blessed to be surrounded by so many truly amazing and inspiring friends and family. I’d like nothing more than to sit around a very large table and share drinks and delicious food with all of you. While distance may not allow this, my heart sings
salute
and proclaims
bon appétit
to each and every one of you
.

Special thanks to Berinn Rae for her motivating and hilarious emails and crits, and her unwavering friendship. You are One Wicked Wiz! To 007 for always lending an ear, and because life would be boring without secret conversations. To Beth Ciotta for being a wise and constant cheerleader, and for letting me say whatever I want to say no matter how many letters the word contains. To Alyson Reuben for her friendship and our mutual love of coffee. To Chris Behrens for being the name behind the name. And to my family, L., L., J., and the fur crew … I thank you for supporting me every step of the way. Without you, this dream would be completely out of reach.

Thank you to a wonderful poet by the name of Vivienne Moss for being kind enough to write a beautiful and haunting poem especially for The Soother. I will treasure it always.

Thank you to everyone on the Crimson Romance team. My witches and I appreciate all that you do.

Because music is such an important part of my life, I’d like to thank Jason Aldean, Miranda Lambert and Flyleaf for their musical accompaniment while writing this witchy tale. You created exactly the mood I needed to get through key scenes.

The biggest thanks goes to the readers. Please know how very much I appreciate your love of the paranormal. As a self-proclaimed Paranormal Romance Junkie, I consider myself to be in good company!

Bevva stomped. “All right, I get it. It’s just that I’m bored.” Full, nude lips formed a well-rehearsed pout — a beautifully pitiful sight amidst the charred surroundings.

Calliope Brennan studied her older sister and wondered, not for the first time, how it was possible they were even related. Two more opposite witches could not exist. Bevva was a redheaded, anger-prone, flame-shooter whose middle name may very well have been
Antagonizer
. Said antagonist — and master caster — had once again roped her into a bout of trickery. All in the name of fun. If you could call hopping realms, scaring the hell out of the first creature they came upon, and then running for their lives before the creatures could retaliate, fun. Calliope had barely made it out of the last realm with her fishnets intact. Her shirt hadn’t been as fortunate, leaving her dressed in her black bra and plaid skirt.

Crossing her arms over her nearly bare chest, she said, “You’re always bored. You need to find a hobby. Besides, aren’t we getting a little old for this?” Sometimes Bevva made her feel like they were still teenagers, which wasn’t always a bad thing. But today? Calliope blew her bangs out of her eyes and gave her sister a serious stare down.

“Don’t bulge those baby blues at me.” Bevva jutted her chin out. Her curls bounced in response. “I know exactly what you’re doing. You’re trying to tame me. Not gonna happen. And as far as age?” She shifted her weight from one four-inched heel-shod foot to the other. “You’re only as old as you feel, oh ancient one.”

Very true. Still, she let the dig roll off her heated back. “Better that than having the maturity level of a six-year-old.”

Bevva laughed, deep and throaty. Calliope fed off the joy of the sound, instantly feeling lighter. Just like that, she forgave her sister — again — for missing her intended target and instead scorching her with a fireball. As a soother, Calliope possessed the power to calm even the most agitated of beings. Side effect: soothing drained her. Negativity sickened her. Soothing her own kind merely made her tired, whereas shadows attached themselves to her like the blood-sucking leeches they were. So, she jumped on sunshine-and-lollipop situations any time the opportunity came along. Laughter had proven over and over to be better than any drug the humans or veiled had ever made.

“Um, you may want to make that sixteen. I happen to like boys. A lot.”

Yes. She. Did. Though most of those
boys
had turned into men centuries ago. Calliope shook her head in resignation. So what if Bevva would probably never be the responsible sister? At least they still had Meera. They’d only found her recently, and though Meera had just discovered her powers, she’d taken her new role as Luminary — a powerful witch tasked to keep peace amongst the veiled community — very seriously.

Pulling a stick of homemade chewing gum out of her skirt pocket, she pondered its sopping wet state before discarding the idea. “Speaking of boys,” Calliope lifted one brow and shoved the ruined gum back in her pocket. “I ran into Thane last time I visited Meera.” Thane was one of the guardians who had helped them save Meera, and the perfect match for Bevva. Why Bevva didn’t see it that way was just one of the mysteries that made her uniquely complex.

“And?” Bevva spun on her heel and took off, presumably in search of the next portal.

Deciding this would be the absolute last one of the day, Calliope conjured up a
witches rock
T-shirt and followed. “And … he asked about you.” Maybe Bevva had shagged a shifter or two since she’d seen Thane, but she suspected that had been her sister’s attempt to replace images of the guardian.

Ah. If this was how she wanted to play it, fine. Shrugging, she said, “So nothin’.”

Bevva stopped, turned and chewed on her lip. After several moments of consideration, in which Calliope watched flames flicker in her eyes, the telltale sign of feelings that ran the gamut from curious to furious, Bevva bit the bullet. “What did he want to know?”

“Definitely not inter — oh, there’s another one. Let’s go.” Bevva bee-lined past Calliope and jumped between two shimmering trees.

Husky feminine laughter enveloped Calliope as she dove through the portal, feeling light and carefree. She realized a second too late the impact this particular realm would have. Crushing anguish sucked her out the other side and threw her to the ground. With a splash, she’d entered Mistropa, a land full of shadowed cast-offs. She knew she wouldn’t make it out unscathed.

Eyes wide, Bevva shoved her curly hair away from her face. “Oh, Calli. I’m so sorry. I had no idea. Let’s get out of here.” Bevva pulled Calliope to her feet and tugged on her arm.

Every bit of worry Bevva felt multiplied at least a hundred times before it reached Calliope. Calliope took a deep breath and forced tranquility into her sister’s body through their skin-to-skin touch. She had enough of her own anxiety without adding Bevva’s to the pot.

Bevva pulled her hand back, narrowed her eyes. “Knock it off. Don’t soothe me. We’ll both feel better once we get you the hell out of here.”

Doubled over, Calliope’s ragged breath echoed off the surrounding trees as foul-smelling water dripped from her now soaked clothes. The emotions; all the sadness was too much. She’d heard tales about this dark place, but had never thought she’d have to learn first hand what the land’s death and destruction could do to a soother. “If you don’t lighten up … we’ll never make it … out of here.”

“Okay, okay.” Bevva cleared her throat before singing a horrible rendition of “Don’t Worry. Be Happy.”

The singing may have been corny and bad — all for effect — but the ending result was a slam-dunk. Calliope nearly giggled in relief as her ribs loosened their stranglehold on her lungs. “Better, thanks. Let’s beat it, shall we?”

Calliope took that moment to fully absorb her surroundings as they searched for the exit portal. It had been at least a decade since she’d landed in a place full of so much misery. Fighting with Meera and the others in the underground kingdom of the slayers had been bad.

Dark and twisted trees dripping with moss and sprouting fungus the size of a berserker’s combat boot made up the bulk of the environment and allowed ample opportunity for mist and shadows to prowl and weave in between the tree trunks. Murky water covered the floor of the forest in pools so dark no reflection could be seen. The same rank water she’d fallen in. The breeze carried the scent of mold and death, making it ever so delightful to breathe through her nose.
Not
.

Each time Bevva paused for a breath between song phrases, Calliope’s ear latched onto another sound and her shoulders sagged with the heavy weight of gloom. Before she could figure it out, her completely dry and gorgeous sister jumped right back into another verse. How had Bevva landed on her feet?

Winter Reunion by Roxanne Rustand
None of this Ever Really Happened by Peter Ferry
Weak at the Knees by Jo Kessel
Flash Point by Shelli Stevens
A History Maker by Alasdair Gray
Trapped Between Two Alphas by Sam Crescent
The New Ever After (The New Ever After Series) by Farley, Julie
Calling All the Shots by Katherine Garbera
Make Me Whole by Marguerite Labbe
Awakened in August (Spring River Valley Book 8) by Wynter, Clarice