Read The Thief-Taker : Memoirs of a Bow Street Runner Online

The Thief-Taker : Memoirs of a Bow Street Runner 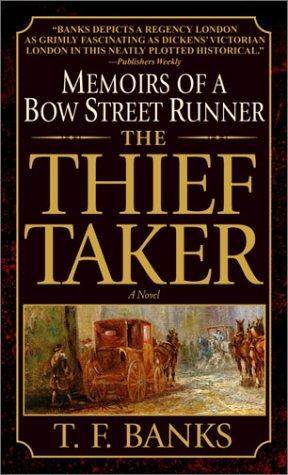 Praise For
The Thief-Taker
by T. F. Banks
“This first entry in a new series is tightly knit and
capably written. And Henry Morton—nimble of wit,
ready of fist—makes an amiable guide through
fog-bound Regency London.”
—
Kirkus Reviews
“
The Thief-Taker
marks the thrilling debut of Regency
London police detective Morton. History mysteries don't
get any better than this.” —
Albemarle Review
“Wonderful… the narration in the book is confident, the
suspense and climax are satisfying…[T. F. Banks
doesn't] strike a single false note.” —
Vancouver Sun
“Banks brings Regency London to life in a first novel
that promises an engaging new series.”
—
Booklist
“Bow Street runner Henry Morton makes his debut in
this well-crafted and nicely flavored first novel….
Definitely a great start for a new history mystery series.”
—
I Love a Mystery Newsletter
“An energetic, authentic historical.” —
Library Journal
“This first novel is exceptional: a series to watch.”
—
The Globe and Mail
“T. F. Banks possesses the confidence and light touch of
an outstanding new talent.” —Otto Penzler 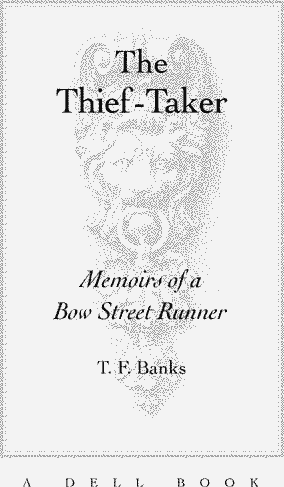 I cannot thank Ian Dennis and Sean Russell enough for tirelessly reading, rereading, and re-rereading the various drafts of this book. Without their invaluable contributions, THE THIEF-TAKER would never have got beyond the fantasy stage or, worse, might have turned into yet another dusty academic study.

The death of Halbert Glendinning will, in my mind, always be coupled to the great battle fought at Waterloo, and the extraordinaary celebration within the city of London that June of 1815.

At about the same time also an odd little event occurred that I mention, not by way of name-dropping, but only because it, too, is forever linked in memory to the Glendinning affair. I had the good fortune to meet the famous Lord Byron, and under circumstances that you will hardly credit, for we did not meet at a salon–Bow Street Runners were not welcome at such gatherings. No, we met at a club I frequented: Gentlemen John Jackson's boxing club. Byron was a devotee of the manly arts, and we actually stood toe to toe and traded some pretty fair blows for a time. That was before the great scandal broke that drove the poet from England forever.

But I am getting away from my story. I recall this meeting because it was after our contest at Jackson's that a boy came to fetch me about this fellow Glendinning. It seems he'd arrived at a nearby house in a hackney-coach. All I knew about him then was that he hadn't paid his fare, and that he was dead.

But it turned out he was a poet, too, of sorts….

—Henry Morton,
The Memoirs of a Bow Street Runner 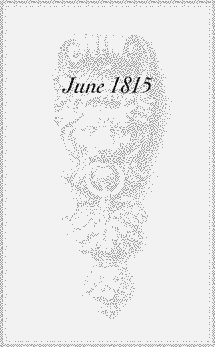 M
orton had all but finished dressing, and
was basking in the glow of warmth and well-being, albeit moderated by a few stinging bruises, that followed his remarkable evening at Jackson's.

Morton looked up to find a boy, gasping in the doorway as though in the throes of an asthmatical convulsion.

“I've run all the way, sir…” the child managed. “ 'Tis Mrs. Malibrant…. Asks that you come directly.” A few desperate breaths were needed. “I'm to say 'tis most urgent, sir. Most terrible urgent.”

Morton tossed aside a towel. “Nothing has befallen Mrs. Malibrant, I hope?”

“Oh, no, Mr. Morton. 'Tis the gentleman, sir. The young gentleman who just arrived at Lord Arthur's.” The boy straightened a little and shook his head. “He appears to be dead, sir. Most thoroughly dead.”

It was but a short walk from Jackson's in Bond Street to their destination in Portman Square, but even so, Morton's long, purposeful stride soon had the boy out of breath again, precluding conversation. Following along the dimly lit street came the hollow echo of a tired horse and tradesman's cart, the owner shuffling numbly beside. A pile of cobbles and rubble forced Morton and the boy outside the line of iron posts that protected unwary pedestrians from street traffic. Here they found their footing with care in the foul street.

At this hour, near to ten Morton guessed, Bond Street was quiet but not empty, the shop windows dark, the signs over doors unreadable in the gloom.

He was trying to remember in what manner Arabella had said she was engaged that night. Was she not on-stage this evening? He was sure she'd said she was, and Morton had a near-infallible memory. Very odd.

The gateman who protected the privacy of the occupants of the Square took notice of Morton's gilt-topped baton and let them through. “Ev'ning, Constable,” he said, tipping his cap. “The disturbance be down there to the right, nigh on Portman House.”

Along the line of elegant Greek Revival town houses, Morton could see one with its doors open, light and guests spilling out into the street, where carriages clustered in a throng. Rather too early for a dinner party to end, Morton thought, and as he drew closer saw that there was little gaiety in the faces.

The boy whisked him past the butler, who had barely an instant to cast a disapproving glare in Morton's direction. He was let into a small sitting-room, and there two gentlemen stood over a third who lay very still on a divan. A pleasantly greying man looked up, his face grim and pale.

Hadn't Arabella mentioned a Lord Arthur a few times? She had so many admirers it was difficult to keep them straight, and Morton usually didn't try, finding them an ineffectual lot. Though Lord Arthur was imposing enough. No fool, Morton surmised, and taking a man's measure was part of Morton's trade.

“Doctor?” Lord Arthur asked the second man, who glanced sourly over his shoulder.

“Well, I'm sorry to say it, sir,” the other replied, “but this young man is beyond my powers to help. Beyond anyone's, in fact. He smells powerfully of strong drink and has aspirated his own vomitus.”

Morton peered past the doctor. The dead man, who could only have attained this state very recently, still had some colour in his face. “His lips are not terribly blue for a man who has suffocated,” Morton offered.

The doctor turned on him, eying him rather viciously. “And you are a medical man, sir?”

Morton held his preferred response in check. “No, I am a Bow Street man,” he said, “but I've seen a few corpses in the course of my duties. His windpipe is blocked?”

“I have seen ‘a few corpses’ in my time, as well, sir,” the little man said, his tone mocking and indignant. “I served with Wellesley in Spain.”

“Army surgeon? Well, that would make you an authority on men drinking themselves to death. You don't mind if I have a look, do you?” Wellesley, indeed! As though this small man were a familiar of the Duke of Wellington's.

The doctor stood his ground a moment more, then
gave Darley a stiff bow. “I have given my opinion,” he said haughtily. “I bid you gentlemen good evening.”

“Thank you for your assistance, sir,” Darley said, and accompanied him to the door.

Morton could see the dead man clearly for the first time: young, perhaps twenty-six or -seven, not strongly formed but hardly effete. He guessed him to be of good height, perhaps three inches shorter than Morton himself. His hair was straw-coloured. His eyes had been closed but they were likely blue. The rather square mouth was now rapidly turning to greyish-purple. His elegant evening clothes, fashionably dark, were covered in vomit. It even matted his hair.