The Seduction of Lady Charity: The Baxendale Sisters Book Four 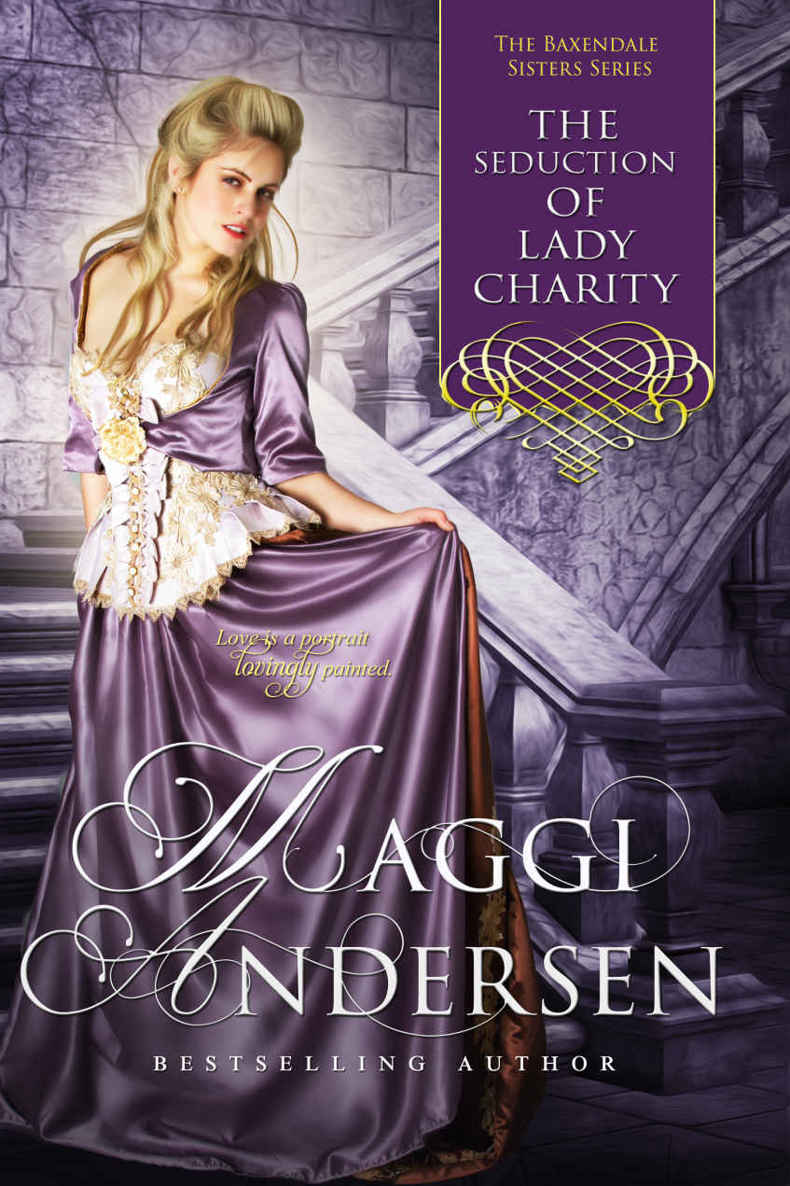 By payment of required fees, you have been granted the non-exclusive, non-transferable right to access and read the text of this e-book. No part of this text may be reproduced, transmitted, downloaded, decompiled, reverse engineered, or stored in or introduced into any information storage and retrieval system, in any form or by any means, whether electronic or mechanical, now known or hereinafter invented without the express written permission of copyright owner.

This is a work of fiction. Any resemblance to actual events, locales or persons, living or dead is coincidental and are the product of the author’s imagination or used fictitiously. All rights reserved, including the right to reproduce, distribute or transmit in any form or by any means. For information regarding subsidiary rights, please contact the author.

THE SEDUCTION OF LADY CHARITY

To my mother, a pure spirit and a wonderful artist. And like Charity, often with a smudge or two of oil paint somewhere.

Let us roll all our strength and all

Our sweetness up into one ball,

And tear our pleasures with rough strife

Through the iron gates of life:

Thus, though we cannot make our sun

Stand still, yet we will make him run.

To His Coy Mistress

Charity observed the Marchioness of Brandreth with a critical eye. Lavinia was a beautiful woman. Her flowing lilac gown emphasized her blue eyes, her dark hair swept up from a long, swan-like neck. The Brandreth diamonds sparkled at her creamy throat. She’d held her head up proudly as she posed for her portrait, but there was a hint of dissatisfaction in her expression that surprised Charity. A woman with a loving husband and children should be contented. But perhaps she wanted more from life. If that was so, Charity understood.

She stepped back to observe the painting again. Would Lady Lavinia approve? Or would she find something here she didn’t see in the mirror and reject the work? Chaloner’s wife had proved more of a challenge to capture on canvas than her husband. A portrait artist’s job was a difficult one, especially when the subject was related, if only by marriage.

When Chaloner’s portrait had been hung in his long drawing room at Brandreth Park, Charity had noticed the looks of disapproval cast by some the gentlemen present. As if painting a man’s portrait had, in some way, cheapened her. Her first instinct was to shrink within herself and shut herself away from society. But now, she was more determined than ever to spite the naysayers and attempt to make a name in her profession.

She finished cleaning her paints and went to open the window to disperse the smell of paint and turpentine. The still gardens slumbered in the summer heat. The house was unusually quiet now that her sisters, Hope, Faith, and Honor had married and her younger sister, Mercy, was visiting relatives with their mother. Charity missed their company, and Hope’s especially, since her sister now spent half the year in France with her new husband. She relied on family a good deal these days, for they brought the social world with them when they came through the door.

Cleaning oil paint from her hands with a cloth, Charity hung her smock on the hook behind the studio door. Her mother had relinquished her sewing room to her with nary a murmur after news came of Faith’s pregnancy and she was now absorbed in knitting small garments. The room was cramped, but south facing with excellent natural light.

In the corridor, Charity almost stepped on their golden-haired dog, Wolf, who lay with his head resting on his paws. “What is it, fellow? Do you miss Mercy?” Wolf managed to look mournful and gave a faint thump of his shaggy tail.

The parlor was empty. As usual, Father was closeted in his study. He would emerge at dinner to glare at her. A Season, with all that it entailed, would have been a frightful waste of his money and her time so she’d declined. Marriage was something she saw in her future, but not for some time, for all her energy was spent on establishing herself as an artist. At least her father’s opposition to her plans had lost some potency since his railway shares and finances prospered. He had employed more staff, and the estate ran smoothly again. Mama, too, was in good humor, absorbed with the prospect of more grandchildren.

“Robin? Give me a minute to tidy myself, Graves.” Charity smoothed the skirts of her peach-colored morning gown, averting her gaze from the spot of blue paint near the hem, and tucked an untidy strand of her fair hair into the bun at her neck.

She’d met him when he’d been a guest at the Marquess of Brandreth’s dinner party. The Baxendale family dined often at Brandreth Park, the huge estate that bordered theirs, as Hope and Faith had married into the family. Since then, Charity’s friendship with Robin had blossomed after discovering they had several interests in common. Robin was one of the few men with whom she could relax and be herself.

The viscount ducked his head as he entered the room, the habit of a tall man who lived in a low-ceilinged Tudor house. She grinned. It was entirely unnecessary in this more modern building with lofty ceilings. Removing his hat disordered his curly, dark brown hair. He brushed a lock from his broad brow, looking more boyish than his twenty-six years. His grey eyes warmed, and he bowed his head. “Good afternoon, Lady Charity.”

“Robin, how agreeable to have your company. As you see, I am alone but for Father. Mother and Mercy are in Ham visiting Hope and Daniel.”

“I gather Lady Sophie sent that from Egypt?” His eyebrows lifted as he pointed to an exotic statue of an ancient Egyptian god that stared coldly at them from the mantelpiece. “Makes you shudder, doesn’t it?”

Charity spared a thought for Hope’s husband, Daniel, whose sister had married an archaeologist. Sophie’s letters to Hope were filled with news of exciting finds for the museum. Charity did so admire her; she was a woman who had flouted society to live the way she wanted.

“I wonder if I might snatch you away from your work for a drive, to take the air,” Robin said. “And hopefully to see a bird. I spied a golden oriole yesterday feeding on berries near the river.”

“Yes, couldn’t miss it, quite striking with the typical oriole black and yellow plumage. There will be a female nearby I suspect.” He grinned. “Where the male goest, so doth the female.”

“Or the other way around perhaps,” she said, grinning back. “I should like to see either of them, although the female is a drabber green bird.”

“Orioles are usually shy, but we might have some luck,” he said. “So you’ll come? With your mama absent, I doubt you would venture outdoors without my encouragement.”

Charity laughed. “It’s a perfect day for a drive.” She welcomed his company, especially as he had a knowledge of art and sketched beautifully himself. Through the window, above the line of trees, the sky was like azure silk drapery. It made her think of a half-finished landscape that lacked nuance. “A delightful idea. Thank you for thinking of me.”

“I’m afraid we can’t fit your maid into my phaeton. Shall I seek your father’s permission?”

“I’ll send the footman to tell him. As it’s you, I doubt he’ll protest.”

He smiled. “Does your father have energy left to protest? His daughters must have run him ragged. And you, my lady, are no exception.”

She wrinkled her nose at him. “Poor Father, I doubt he does. But there is so much to concern us in this country of ours, the poverty, the crime, the need for reform, so that whether or not I choose to ride without my maid seems entirely insignificant. I won’t keep you waiting while I change my dress. I’ll just fetch my shawl.”

“Good. I confess to an ulterior motive.”

She raised her eyebrows. “Oh?”

“Which I shall save for when you are a captive audience.”

“Should I be worried?” Not waiting for an answer, Charity left the room.

A few minutes later, Robin drove his phaeton through the gates and out into the narrow lane bordered on both sides by woodland.

“It’s a nice day,” Charity said in some surprise. A fresh breeze swirled around her ankles and ruffled the ribbons on her hat. She drew her shawl over her shoulders.

“I gather you haven’t ventured out earlier to discover it.” His gaze rested on her before turning back to the road.

“I did plan to take my sketch book and walk along the river but became distracted,” she confessed.

He watched the road as the phaeton negotiated a sharp corner. “No need to thank me for taking care of your health.”

“My health is excellent, thank you.”

He glanced at her. “You’re pale, and there are dark circles under your eyes.”

She raised her brows. “My, what a charming compliment!”

“You’ve been painting by candlelight again.”

“You’re becoming a nag, sir. I have a mother for such things.” She studied his attractive profile, his straight nose and strong chin. “Now what is the reason for this outing, apart from a concern for my health?”

He gazed at her with sorrowful eyes. “Bad news, I’m afraid. My uncle lies gravely ill with no hope of recovery. And, as his only son, Charles, has passed away, I am to inherit.”

“I am sorry to hear about your uncle. That is indeed sad. I daresay you soon will be departing from our little corner of the world. We shall miss you.”

He remained silent, his eye on his spirited pair of chestnuts.

“You say we, but do you mean you, especially?” he asked after a moment, casting her a sidelong glance.

“Of course I speak for myself. We have enjoyed an agreeable friendship, have we not?”

“Will you have time to write? I should very much enjoy hearing about your new life. It should be quite an exciting one.”

“A demanding one,” he said with an intake of breath. “Of course I’ll write, but perhaps it won’t be necessary.”

“Here we are.” Robin pulled the phaeton onto the grass verge and secured the reins. “I believe it was over in that field where I first spotted him.”

After helping her down, he walked with her across a field bordered by towering poplars. “A charming scene, for a charming lady,” he said as they picked their way over uneven ground.

“Where-e’er you walk, cool gales shall fan the glade,

Trees, where you sit, shall crowd into a shade,