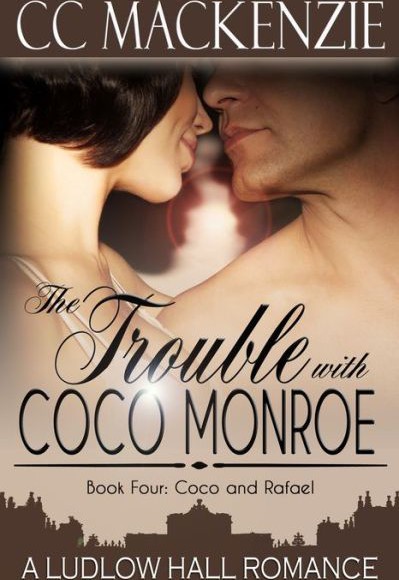 Coco Monroe is the apple of her Billionaire father's eye. But it's a love that comes with conditions. Desperate, Coco makes a bid for freedom. Head of Global Operations & Security for Monroe Industries, Rafael Cavendish lost Coco once. When her life is in danger from the Russian Mafia he has no problem taking matters into his own hands. But Coco's had enough of controlling men. Lord Rafael Cavendish needs taught a salutary lesson and she's just the Monroe to do it.

‘Sometimes being the only daughter of one of the wealthiest men in the country seriously sucked.’

Other Books in the Ludlow Hall Series

by CC MacKenzie
and what readers say:

This review is from: Reckless Nights in Rome (A Ludlow Hall Story) (Kindle Edition)

"This book stands out from other romances for several reasons. One is the realistic character development. The main characters have areas of their lives where they are quite confident, and others where they are not so secure. Even the secondary characters are well developed and interesting."
Kass on amazon.com

This review is from: Reckless Nights in Rome (A Ludlow Hall Story) (Kindle Edition)

"I normally do not read contempory romance as I prefer paranormal or historical but I picked this up as it was a freeby. Wow! Excellent plot, writing, characters kept me going till the end. I will be buying more from this talented author."
Mooncat on amazon.com

This review is from:

"I thought I was going to read a simple romance novel, but I was pleasantly surprised. The novel was so spicy, and I liked it. This novel was a page-turner. I loved the plot and the relationships among the characters."
Sherry on amazon.com

This review is from:

"I found myself laughing out loud, shedding a tear, and fanning myself during the steamy scenes. This book takes you on a roller coaster of emotions with the characters."
TAM on amazon.com

This review is from: Run Rosie Run (A Ludlow Hall Story) (Kindle Edition)

"I am addicted to this story line of books. They just keep getting better and better. This one was amazing read it in less than a day simply because I couldn't put it down. Can't wait for the next in the series." AMAZING
RM on amazon.com

This review is from: Run Rosie Run (A Ludlow Hall Story) (Kindle Edition)

"brilliant book once you start to read you cannot put it down good from start to finish would recommend this as easy reading"
Mrs C Smith on amazon. co.uk

The right of C C MacKenzie to be

identified as the author of this

work has been asserted by her

under the Copyright Amendment

This work is copyright.

Apart from any use as permitted under

stored in a retrieval system,

in any form or by any means,

without the prior permission

incidents are either a product of

the author’s imagination or are

living or dead, events or locales is

C C MacKenzie is a wife, and mother of three, based in South Cheshire, U.K.

Since childhood, she dreamt of writing stories that readers would fall in love with, but put those dreams on hold to focus on her family and her careers in banking, fitness, interior design and construction.

C C MacKenzie is currently working on more contemporary romances due for release this year and in 2014. She is also working on a vampire paranormal saga set in a cataclysmic urban future since she loves those suckers!

For Ryan, a truly heroic warrior.

Other Books in the Ludlow Hall Series

The Fall of Jacob Del Garda

The
beep, beep, beep of the heart monitor rang too loud in Rafael’s brain.

It was three a.m. He’d already dumped his suit jacket, his tie, slipped open the top two buttons of his white cotton shirt, rolled up the sleeves. He didn’t notice the spatter of blood, her blood, on his cuffs. Not once did his eyes leave the woman lying on the bed covered with a simple sheet of crisp cotton. Her inky hair was tied back from a face so fabulous it could start a world war. Helen of Troy had nothing on the ethereal dark haired beauty of Coco Monroe. Although he knew she regarded her looks as a curse rather than a blessing. Eyes the colour of glittering tanzanite were sleeping under fragile lids edged with turbo-charged lashes the colour of soot. Those full lips looked too dry. The tube inserted down her throat was taped to her cheek.

All he could think was she looked too frail, too vulnerable, weak. And that was all wrong. Coco Monroe took on the world. She spat in the face of adversity, backed down from nothing and no one. Especially him and her father, the two people who loved her more than life. Yeah, he could admit he loved her now. Sitting here alone in the dark, with just his thoughts and the terror in his heart for company while she fought for her life.

He’d failed. Failed to protect her, failed to realise what was really underneath the constant sparring and snarling they’d given into for too many years. They just couldn’t seem to help but rub each other up the wrong way.

He’d fought in Afghanistan, Iraq. He’d seen the worst a human being could do to another and he’d seen the best too. But he’d never seen so many wires attached to a person or so many tubes inserted into veins. Machines were breathing for her, an obscene hiss and exhale as her chest rose and fell in a robotic rhythm that drove him fucking crazy.

And all because one man, crazed and insane because he’d stopped taking his medication, had slipped under their radar and attacked her with a fucking bread knife in full view of the public, the paparazzi and worse, the digital television media. Apparently the attack had already been downloaded over one million times on YouTube. Sick bastards. His eyes stung as he recalled the moment the boy, no more than twenty, had fisted her hair, yanked back her head and slid the knife between her ribs. All the while snarling, ‘You’re mine, mine, mine, baby.’

He shut his eyes tight refusing to go over, again, the next hellish hours as she lay on a wet sidewalk, the metallic scent of her blood running into the gutter. The wail of the ambulance as the paramedics fought to save her. Then the chaos and panic in the emergency room, the rush to theatre and now the hellish waiting in the intensive care unit.

Rafael scrubbed his cheeks, the two-day-old scruff, and knew he desperately needed a shower. But he couldn’t bear to leave her.

The hiss of the door opening had him turn to find Charles Monroe looking as bad as he felt. The man looked as if he’d aged ten years. He jerked his head in a ‘come here’ gesture and left the room.

Rafe took a last look at Coco before he joined him outside.

A nurse hurried past him into the room to check the readings, take Coco’s temperature.

‘You need to go home, son. Get some shuteye,’ Coco’s father said in a low voice.