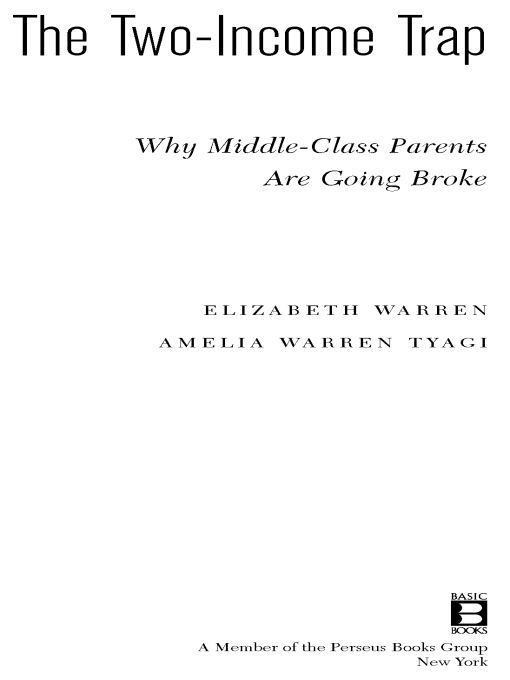 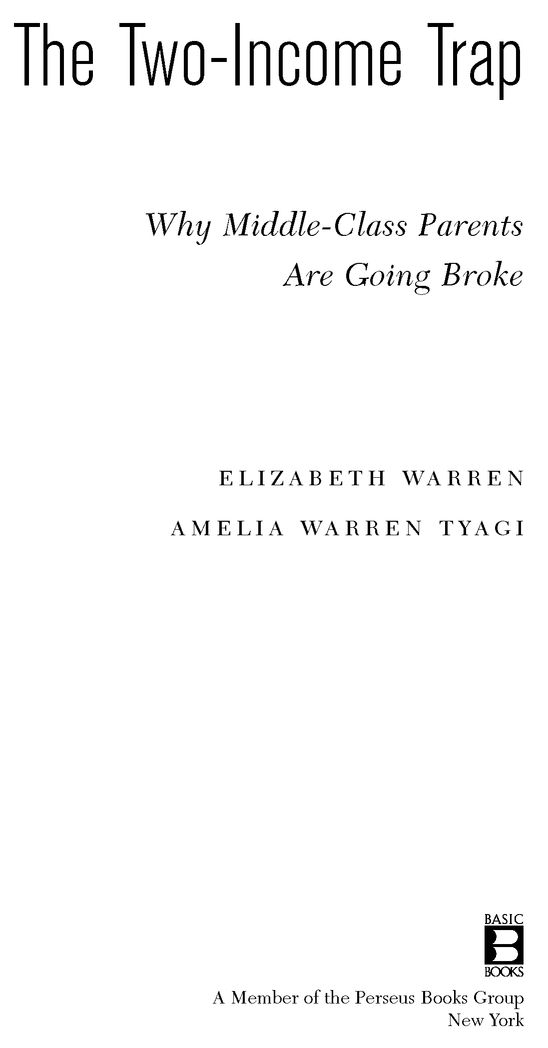 This book is dedicated to all parents who wake up with hearts thudding over the possibility that buying school shoes and Girl Scout uniforms will mean that there won’t be enough left over to pay the mortgage. These people are our neighbors, our brothers and sisters, our friends and coworkers. They travel anonymously among us, but we know them. They went to college, had kids, bought a home, played by the rules—and lost. It is time to rewrite the rules so that these families are winners again.
Introduction
T
he Two-Income Trap
shipped to bookstores on September 2, 2003—an easy day to remember, because it happens to be Amelia’s birthday. (Amelia’s co-author, Elizabeth, also celebrates that day, since she’s Amelia’s mom.) Within two weeks,
The Two-Income Trap
had been featured in
Newsweek
,
Time
,
The New York Times,
and
Business Week
, and on The Today Show, National Public Radio’s “All Things Considered,” and so on.
At the end of September, we took a deep breath. Wasn’t that exciting! Now, time to get back to life as usual—research projects, teaching classes at Harvard Law School, a demanding toddler.
Then Dr. Phil called. And Lou Dobbs. And Bill Moyers. And Senator John Edwards. And
USA Today, Houston Chronicle, Los Angeles Times, Boston Globe, Wall Street Journal, Marketplace,
CNN
.
And the calls kept coming.
Their message added up to one thing:
The Two-Income Trap
is a phenomenon.
Most of the time, we talked with reporters who just wanted to quiz us about our book. “How did you find out about the Two-Income Trap?” (We completed the largest study ever on financial failure in America.) “What should families do to protect themselves from the Two-Income Trap?” (Take their own Financial Fire Drill.) And so on.
But sometimes the attention was far more personal. A reporter, a secretary, a neighbor taking out her groceries, or a mom dropping off her son at preschool would lean in close, dropping her voice to
a whisper. “
The Two-Income Trap
is
my life.
No one has any idea
.
Thank you for writing this book.”
At book signings we met retired couples who asked us to sign three copies, one for each of their grown children who, they said, were caught in the trap. On radio call-in programs we talked with pastors and rabbis who worried about families in their congregations who were sliding into debt and needed help. We received emails from stay-at-home moms who said this book helped them rethink their choices and from young couples who decided to pause before committing to an oversized mortgage that would chew through both of their incomes.
ADS
15.4Mb size Format: txt, pdf, ePub

A Kind Of Magic by Grant, Donna
Double Cross by Malorie Blackman
Secret of the Mask by Gertrude Chandler Warner
The Player of Games by Iain M. Banks
Hood of Death by Nick Carter
Lucas Ryan Versus: The Hive (The Lucas Ryan Versus Series) by Madison Daniel
The Roman's Woman (A Singular Obsession Book 4) by Lucy Leroux
Dragon's Child by M. K. Hume
The Click Trilogy by Lisa Becker
The King of Vodka by Linda Himelstein