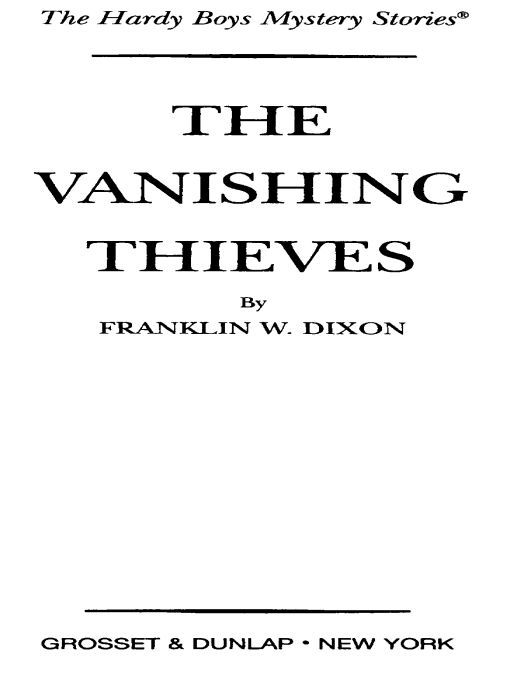 Table of Contents
Â
Title Page
Copyright Page
Â
1 The Stolen Car
2 Hijacked!
3 Crash Landing
4 A Clever Escape
5 The Plant
6 Caught!
7 The Stakeout
8 Trapped!
9 The Bomb
10 Captured
11 Overboard!
12 Turned Tables
13 Dolphin Rescue
14 A Magical Disappearance
15 Spare Parts For Sale
16 Outwitted
17 The Old Man
18 A Surprising Discovery
19 The Big Boss
20 The Missing Coin
Â
CHET Morton's cousin, Vern, is on his way to California to find a rare and valuable coin mysteriously missing from his uncle's bank vault. When he stops in Bayport, his brand-new car is stolen.
The Hardys and their friends take on a double mysteryâand double danger. They head for the West Coast to investigate, and encounter a host of strange and sinister characters, including a madman who thinks he is the maharaja of Kashmir and a mysterious blonde woman who unwittingly leads the young detectives to the ring of thieves. 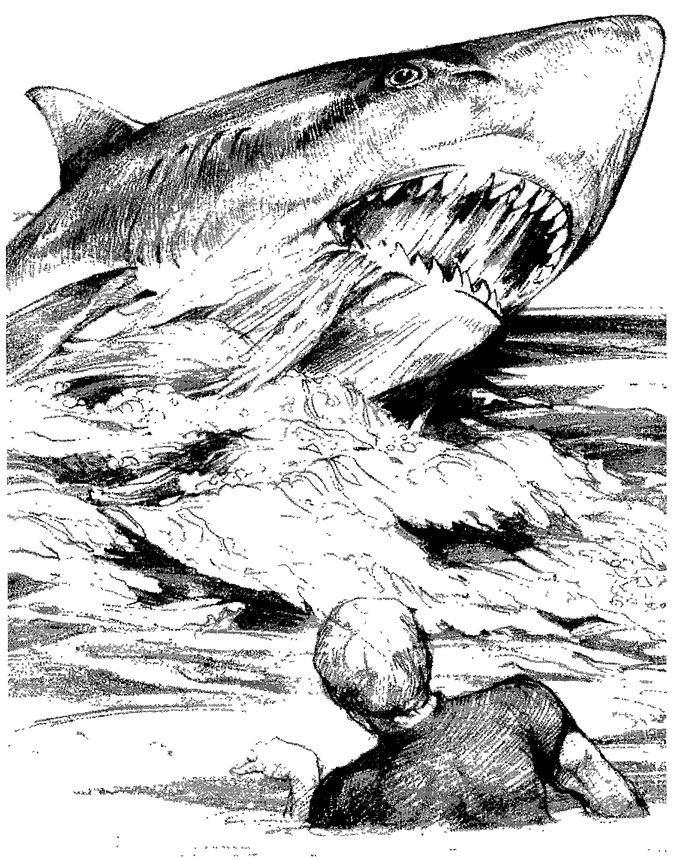 The scanning, uploading, and distribution of this book via the Internet or
via any other means without the permission of the publisher is illegal and
punishable by law. Please purchase only authorized electronic editions, and
do not participate in or encourage electronic piracy of copyrighted materials.
Your support of the author's rights is appreciated.
Â
Copyright Â© 1981 by Simon & Schuster, Inc. All rights reserved. Published in 2005 by Grosset & Dunlap, a division of Penguin Young Readers Group, 345 Hudson Street, New York, New York 10014. THE HARDY BOYS
Â®
is a registered trademark of Simon & Schuster, Inc. GROSSET & DUNLAP is a trademark of Penguin Group (USA) Inc. S.A.
Â
eISBN : 978-1-101-07675-0

1 The Stolen Car
“Quick, eat the rest of the pizza!” Frank Hardy urged. “Here comes Chet!”
It was Saturday afternoon and Frank and his younger brother Joe were seated at a table in the Bayport Diner with Callie Shaw and Iola Morton. Iola's tubby brother Chet, who was known for his voracious appetite, and a slender boy of about eighteen had just walked in.
Frank's warning was too late. Chet had already spotted them, and was headed their way with his gaze fixed on the half-eaten pizza. His companion followed close behind.
Picking up a piece of pie, Chet said, “Umm, pepperoni and cheese, my favorite.”
“You're welcome,” Joe said with good-humored sarcasm.
After taking a bite, Chet turned to the other boy, and in a generous tone offered, “Have some pizza, Vern.”
“No, thanks,” Vern said, embarrassed.
“Chet, you might at least introduce Vern before eating up everything in sight,” Iola admonished her brother.
“Oh, sure,” Chet said. “This is our cousin, Vern Nelson, from Canada.” He used his slice of pizza as a pointer. “Callie Shaw, Frank and Joe Hardy.”
“Vern is visiting us at the farm,” Iola explained.
Finishing his piece of pizza, Chet took another. “The matinee today is a monster movie,” he announced. “Why don't we all go?”
The others agreed, and a few minutes later the six left the diner. As they emerged onto the parking lot, Vern Nelson suddenly stopped short. “Somebody's stealing my car!” he cried out.
A brand-new blue sedan was being driven out of the lot by a red-haired man. “Let's go after him!” Chet cried.
The young people raced to the Hardys' sports sedan and jumped in. Frank, Callie, and Vern sat in front, while the others squeezed into the back. Seconds later, Frank began following the blue sedan.
The thief had a head start of a block, but was not driving fast. Frank soon reduced the distance between them to a quarter of a block. However, intervening traffic kept him from getting any closer.
The red-haired man obviously was unaware that he was being followed, because he kept well within the speed limit. He headed for the downtown section of Bayport. Frank gradually narrowed the distance between them until he was only fifty feet behind. At that moment, the thief seemed to realize he was being tailed. Suddenly he floored the accelerator!
There was a red light ahead. The man drove through it with a blasting horn, barely missing another car. Frank had to brake to a halt, and though the light changed a moment later, the stolen car was already more than a block away.
Frank saw the thief turn left into an alley. He went after him, but when he emerged at the next cross street, there was no sign of the blue sedan.
A huge eighteen-wheel truck was parked on the right, and the driver was closing the back door. Joe called out to him, “Did you see a blue sedan speed by here?”
The driver turned around. He was a squat, powerfully built man wearing a short-sleeved sport shirt that revealed tattooed arms.
“Zoomed by like an express train,” he said. He pointed east. “Went that way.” 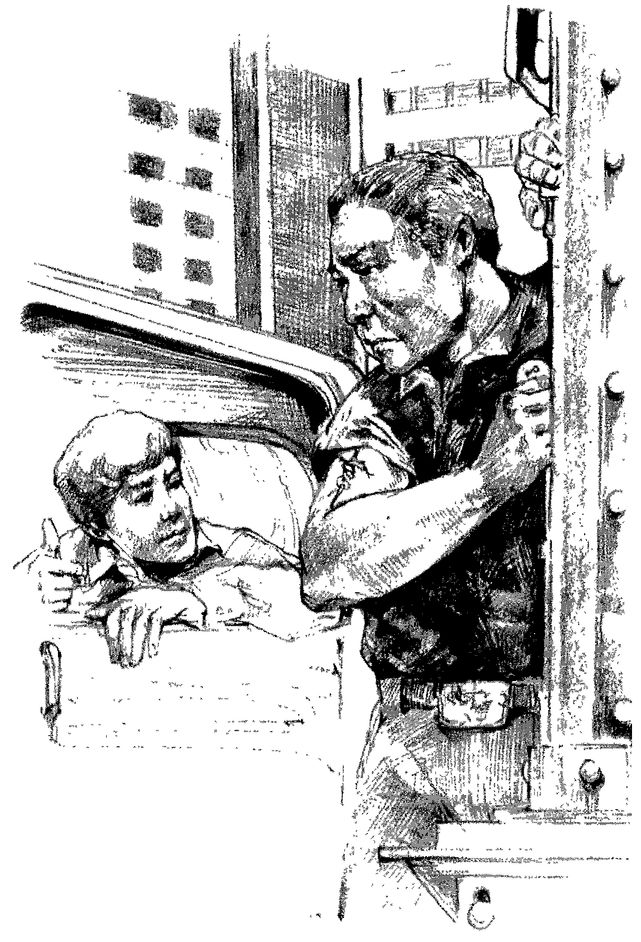 “Thanks,” Joe said, as Frank turned the car in that direction.
The thief, however, was nowhere to be found. They cruised up and down side streets for a time, then drove to the Hardy home on Elm Street. All thoughts of a movie matinee were now abandoned.
Aunt Gertrude was in the kitchen when the six young people trooped in the back door. Miss Hardy, sister of the boys' father, was a tall, angular, peppery woman, who was just taking a pie from the oven.
“Umm, smells like cherry,” Chet said, moving towards the pastry.
“This is no time to think about food,” Joe told him. “We have to call the police.”
“The police!” Aunt Gertrude repeated. “Are you boys involved with criminals again?”
“Tell you all about it later,” Frank promised, heading into the front hall.
He used the front hall extension to call Chief of Police Ezra Collig. Fenton Hardy came down the stairs as he was talking. The tall, middle-aged detective had once been with the New York City police force, but was now a world-famous private investigator.
“What's going on?” he asked Frank as his oldest son hung up.
Frank introduced Vern Nelson to his father and then explained about the car theft.
“That's quite a coincidence,” Mr. Hardy said. “I happen to be investigating a car-theft ring, but not in this area.”
“Where are they operating?” Joe asked.
“Mainly in New York City.”
Chet said, “The funny thing is the way the car disappeared. Course that red light slowed us down, but we were only a little over a block behind when the thief turned into the alley. He should have still been in sight when we came out the other end.”
“Particularly since that tattooed fellow told us which way he went,” Vern Nelson said.
“Tattooed fellow?” Fenton Hardy asked, raising his eyebrows.
“A truck driver,” Frank explained. “He was closing up the back of his truck when we drove up.”
“What did he look like?”
“Sort of squat, but well-built.”
“Did you happen to notice the design of his tattoos?”
The four boys and Iola had not paid any attention, but Callie Shaw said, “I saw the one on his right arm as we went by. It was a dagger with a snake wrapped around it. ”
“Crafty Kraft!” the detective exclaimed. “The car-theft ring must be spreading, because he's one of its chief lieutenants!”
“You mean that driver's in cahoots with the gang you're investigating?” Joe asked in surprise.
Mr. Hardy nodded. “I've a feeling Vern's car disappeared into Kraft's truck. It's probably the type whose rear door lowers to form a driving ramp. ”
“Oh!” Vern said in exasperation. “I wish I could lay my hands on him and that redheaded thief who drove off in my new car!”
“The car thief was red-haired?” Fenton Hardy asked.
“Yes. ”
“Now I'm positive it was the gang I'm after,” the detective said. “Red Sluice, one of the slickest car-heist artists in the country, works with Crafty Kraft. ”
Mr. Hardy listened to the group's description of the truck, and phoned the information to Chief Collig. When he hung up, Vern asked whether he thought there was a chance his car would be found.
“I doubt it,” the detective said frankly. “So far not a single vehicle suspected of being stolen by this ring has been recovered. The theory is that they're either being repainted and sold in other states under fake registrations, or being stripped for spare parts. ”
“But the police have the truck's description.”
The detective nodded. “But no license number, and there are hundreds of similar trucks on the highways. ”
Aunt Gertrude walked in from the kitchen and invited the boys' friends for dinner. They all accepted, and, after calling their parents, went into the dining room.
With Mrs. Hardy, there were nine around the table. Laura Hardy was a slim, attractive woman with sparkling blue eyes. She quickly put Vern at ease by warmly asking about his family and plans for his stay in Bayport.
Vern explained that he was an orphan who lived with an older sister in Montreal. An uncle on his father's sideâno relation to the Mortonsâhad died in California and had left him a rare coin, a 1913 Liberty Head nickel. Only five of those were known to be in existence, and his Uncle Gregg, who had bought his eight years ago, had paid $100,000 for it. However, the coin had disappeared under mysterious circumstances before the will could be probated. Vern was on his way to California to look into the matter, and had stopped en route to visit the Mortons.

Undying Hope by Emma Weylin
A Man of His Word by Kathleen Fuller
Strange Robby by Selina Rosen
The Creed of Violence by Boston Teran
Wings in the Dark by Michael Murphy
Niagara Falls All Over Again by Elizabeth McCracken
Scavenger of Souls by Joshua David Bellin
The Wolf Ring by Meg Harris
Black Bridge by Edward Sklepowich
Heartshot by Steven F. Havill