Read The Waters & the Wild Online

The Waters & the Wild 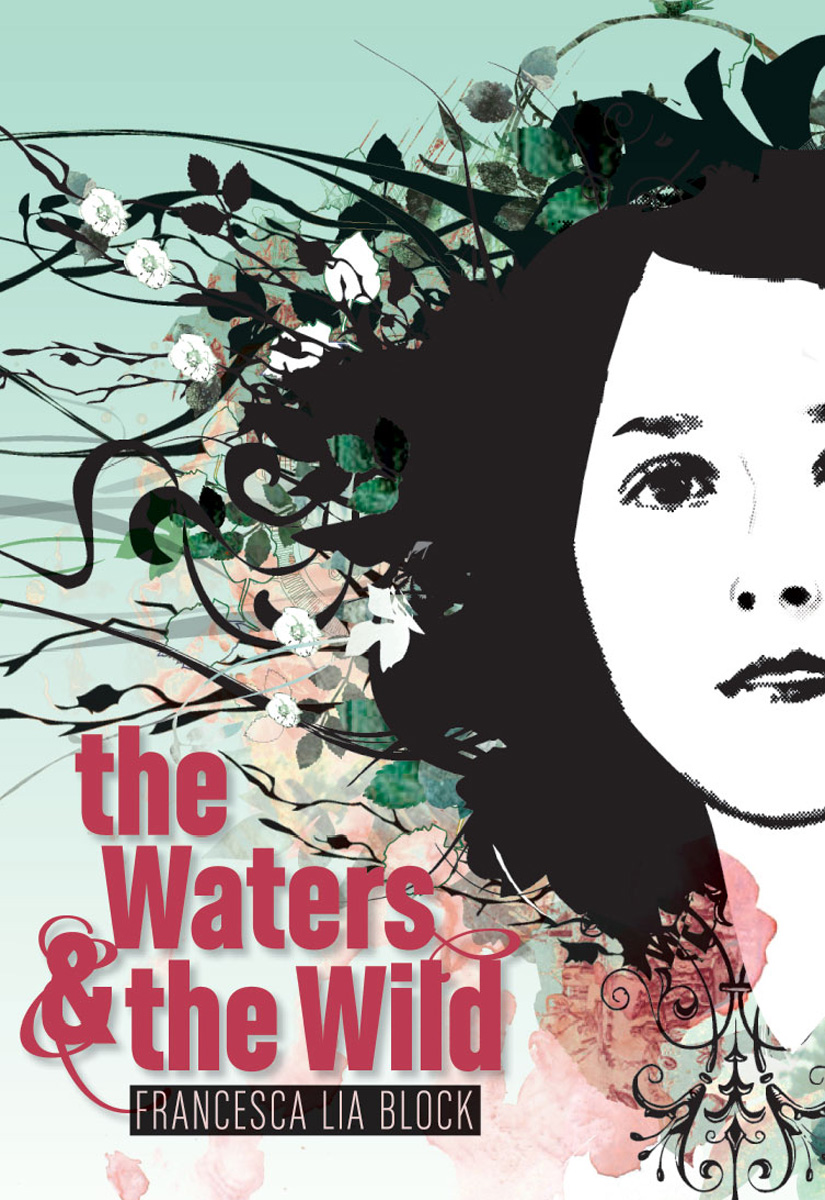 And this same progeny of evils comes

From our debate, from our dissension;

We are their parents and original.

Thirteen Ways to Know You are a Changeling

Test for a Changeling

Other Books by Francesca Lia Block

thirteen ways to know you are a changeling
1
Haze

W
hen Bee woke up, there was a girl standing in her room.

Then she was gone.

The eucalyptus leaves, rung by the night breeze, tinkled as if the salt from the sea air had crystallized, turned them to glass. Bee
got out of bed, flung herself to the window and looked out at the sleeping garden. The polished glass chips in the flower beds and the sequins on the saris hanging over the gazebo reflected the light of the full spring moon and made the air phosphorescent.

But there was not even the shadow of a girl.

The loneliness Bee always feltâhad felt since she could remember feeling anything at allâwas so big now, so alive, that it was almost a creature. And after what she had seen, it felt colder, crueler than ever.

As a little girl she couldn't make friends. She was too quiet, unable to read. Her teachers thought she had a learning disability, and for a while she was in Occupational Therapy trying to learn how to interpret facial
expressions and the tones of people's voices. Now she struggled through school, just passing every semester.

“You're smart,” her mother said. “It has nothing to do with intelligence. Some of the most creative minds were diagnosed with learning disabilities.”

School wasn't the only problem. Even with the O.T. it was hard to know how to act with people. And everything about Bee was odd. She couldn't eat animal flesh or watch all that television, try to talk about what celebrities were wearing or the war in Iraq. She preferred the solitude of her mother's garden.

“Miss Green Thumb,” her mom called her. When she was little she fantasized about eating handfuls of dirt to be closer to nature. The red, yellow and sterling roses bloomed bigger than cupcakes. The water
hyacinth in the pond burst into edible-looking purple-and-white blossoms. As she got older she tended that pond, lovingly, feeding the koi, gently lifting out the plants with their long trailing roots to clean the filter, drain and refill the water. On the mossy bank by the pool she set out rose-petal beds and an abalone-shell bath, filled with water that brought out its rainbows. She squeezed lemons from the tree and picked figs, made lemonade and fig cakes in tiny cupcake holders, put them out on doll-house china. In the morning the food was gone and the beds looked slept in.

That is the world I belong in, she thought. The tiny garden world. Not this.

Ever since she was a small child, Bee knew she couldn't tell her mom about the mystery
in the garden. Now she had another secret: the girl in her room. Deena didn't believe in the supernatural. She was a born scientist; everything had a tangible cause, related to some function of the brain. But for Bee this way of looking at the world felt empty, as if you were trying to explain away angels as static in the temporal lobe, deities as no more than electricity.

Joseph Hayes, or “Haze,” as they called him. He might know something about all of this. He always had a book with him, and those thick glasses to hide behind. People said he thought he was an alien. After last night she would have believed almost anything.

Haze was sitting alone as usual at lunch-time. She slid onto the chair across from him. He glanced up. She hadn't noticed his
eyes before, with those glasses and all. But they were huge and dark, and even this far across the table she thought she saw herself reflected in them like two little dolls.

She thought, He's weird, in a good way. Weird like me.

He was reading his book. It was a withered old volume, leather-bound. It looked ancient but preserved, like a mummy inside its linen binding. Bee wondered what it was about.

He seemed startled that she would sit here at all, let alone talk to him. They said he stuttered, but she'd never heard him speak once. Not that she talked much herself, but her life had changed overnight.

He nodded. He had high, fine cheekbones
and lips like a starlet's. A little acne on his high forehead where a black lock of hair fell forward over his eyes.

Haze. Who was this boy? Everyone made fun of him. He stammered. He was smart. Unironically ugly, thick-lensed, thick-framed glasses. Problem skin. Beautiful eyes. Hands with tapered fingers and prominent veins, although his nails were bitten so much it looked painful. He had nice lips. Did anyone notice those lips? Did he really believe he was an alien? He read big thick books about stuff most people didn't believe existed.

He nodded again, looked down at his book.

“What are you reading?”

He closed and turned it so she could see the cover.

The Encyclopedia of the Paranormal
. She knew he was the right one to talk to.

“I have a question for you and your book.”

This sparked his interest, she could tell. His eyes got darker behind the lenses of his glasses and he tilted his head almost imperceptibly to the side, watching her. She realized he hadn't said a word this whole time, but it felt like he had, somehow.

“Is there some phenomenon about someone who looks just like you, like a twin? What's that called? This twin who shows up and then just disappears?”

He was finding something in his book, flipping through itâhe knew what he wanted. Yes, there it was. He pushed it across the table to her.

She read the definition. A chill grazed her spine, as if he'd slipped an ice cube down her shirt. But Haze would never have done that. He wasn't a tease. He wasn't a flirt. And the chill was worse, too, than ice. So cold it went through her skin and penetrated to the marrow of her bones.

She read further. “The sighting of one's doppelganger is often associated with a premonition of the viewer's imminent death.”

The Magus Zoroaster, my dead child,

Met his own image walking in the garden.

That apparition, sole of men, he saw.

For know there are two worlds of life and death:

One that which thou beholdest; but the other

Is underneath the grave, where do inhabit

The shadows of all forms that think and live

Till death unite them and they part no moreâ¦'”

“What?” The words were like a cold, bittersweet elixir that made her spine tingle. “Who wrote that?” she asked, but it was suddenly hard to talk.

“Sh-helley,” Haze stammered. His voice, quoting the poem, had been like ironed silk or still water. “We all die, though, you know? It isn't that bad really.”

She got up from the table. The cafeteria floor was so sticky that her sneakers made a soft popping when she moved; it sounded as if someone was following her. All around her was noise and the sickening smells of grease. Her stomach tumbled, nauseous, and the faces of the other kids eating their lunches glowed with a bilious yellow-greenish light,
the color of fear. Why had she talked to him at all?

But she was hurrying away from him. In the glass cafeteria wall a girl was running beside her.

L
ew was in the garden, under the plum tree, when she got home from school. Doing someone's chart. As practical as her mom was, Lew was the opposite. Just dreaming all the time. Making a living from astrology and tarot readings, publishing the occasional esoteric article. He pushed his wheelchair back from the table
when she got there. There were purple plum stains on the brick patio.

“Are you okay?” she asked him.

“I was just going to ask you that.”

“I don't have much appetite. It was a rough night.”

Lew was watching her carefully now. He did look pale. She wondered how much pain he was in all the time, pretending he wasn't. A pale bluish halo of light surrounded his gray hair.

“What does that mean?” he asked.

She wanted to confide in him. She needed to talk to someone and he would understand better than her mom would, but it was difficult for her to say it.

Finally she blurted out, “What do you know about doppelgangers?”

“Supposedly Abraham Lincoln saw one. And Percy Shelley. John Donne. Your mom thinks it's related to stress. They were all ill, under stress at the time. John Donne's wife had a stillborn baby. I don't know much more. That's from Wikipedia.”

She sat down on the grass and started pulling the heads off of the little daisies that bordered the wall of bougainvillea. Crushing them in her fingers until they felt wet, like with blood; tossing them aside.

“Why? What's wrong? Too much stress at school?”

She shook her head. “I don't fit in. So boring. Every teenager feels like that.”

“That doesn't mean it's easy.”

Really, she didn't believe that she felt like
every teenager at all. She was much more of a freak. Than anyone, probably, except maybe Haze.

“I had an experience,” Bee said. It was a risk to tell Lew. He might tell her mom. But she couldn't hold it back anymore.

“Do you think this is something for your mother? Is it about boys?”

“I saw someone in my room last night.”

Lew jerked forward so abruptly she was afraid he'd fall.

“So that's what this doppelganger talk is about.”

“Yes, well. I don't know. She was just standing there, and then she said, âYou are me,' and disappeared. I didn't dream it.”

“I have no idea. Mom would say it's a hallucination. Too much stress, like you said. Don't tell her.”

“Well, you are our little Gemini after all.”

“Very funny. So says the astrologer.”

“No, I mean seriously, from a symbology perspective. Let's say she wasn't a real girl. What do you think the significance is? Is it about growing up?”

“An identity thing. âYou are me.' Leaving one self behind for a new one. But the old self is always part of you, too. Does that sound right?”

She scowled at him. Even if she pretended (I am a thirteen-year-old double Gemini girlâScorpio moonâwho lives with her therapist mom and her mom's astrologer boyfriend in Venice, California; I go to school, where I get bad grades; I write poetry with my left hand, dance in my room, read books, listen to music, Google images of goblins and the tattoos my mom won't let me get, dream of devouring my garden), she really had no idea.

In some ways that was nearly as frightening as seeing the girl in her room.

“Some people think you begin to grow up when you stop trying to figure out who you are,” Lew said.