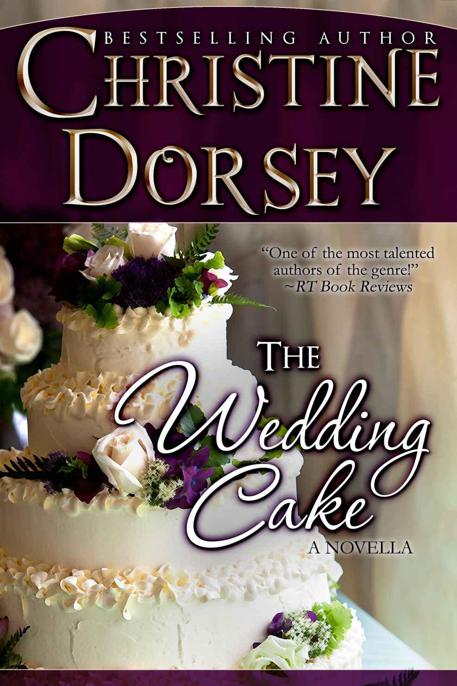 in the anthology
The Ways To A Man’s Heart

Digital formatting by
A Thirsty Mind

All rights reserved. No part of this book, except in the case of brief quotations embodied in critical articles or reviews, may be reproduced in any form by any means, including information storage and retrieval systems, without prior written permission from the author.

This book is a work of fiction. Names, characters, places, and incidents are either products of the author’s imagination or are used fictitiously. Any resemblance to actual events, locales, business establishments, or persons, living or dead, is entirely coincidental.

The scanning, uploading, and distributing of this book via the Internet or via any other means without the permission of the copyright owner is illegal and punishable by law. Please purchase only authorized electronic editions, and do not participate in or encourage electronic piracy of copyrighted materials. Your support of the author’s rights is appreciated.

Cream butter and sugar. Beat in egg yolks. Mix together flour and cinnamon and add in small portions (to prevent lumping) to the sugar mixture. Then beat in dried fruit, candied peel, and nuts, again in small portions.

Cream yeast with small amount of milk and add to cake mixture. Then add enough of the remaining milk to form a thick paste. Beat the egg whites until frothy and blend them into the cake mixture. Cover and let stand in warm place for 1 hour.

Preheat oven to 325 degrees. Butter a 9-inch springform cake pan and line the bottom with parchment paper and butter the paper. Work the batter with hands to form stiff paste. Turn it into the pan and bake for 2 1/2 hours, or until skewer pushed into center comes out dry. During baking, cover cake with baking parchment if it is getting too dark.

“F
or heaven’s sake, Biddy, would you hush up?” Cinnamon lifted a towel above her head and resumed slapping at the small fire on the kitchen floor. “Do you want the entire household to crash down on us?”

“What?” Cinnamon’s head turned at the sound of the unfamiliar male voice. “Who are
you
?”

“As I said, move out of the way.” The man delivered the words as he tossed water from the pantry bucket onto the burning mess.

“Ohhhh!” Cold seeped through Cinnamon’s petticoats, wetting her legs, soaking through her new kid boots. “What are you doing?” She looked down to see the stranger grabbing the hem of her sodden skirt. When she rapped his shoulder, he glanced up, giving her a smile that made her wet toes curl.

“Not much harm done, then,” he said in a voice softened by a Scottish burr. “Only scorched the outer layer.”

Not much harm done? Her gown was ruined—and her new boots with the ribbon lacings. “Look at me. I’m all wet!” Then something he’d said hit her. “Outer layer of what?” But the man, still kneeling at her feet, had turned his attention to the tumbled baking tins not far from her on the floor.

“Yer skirt,” he tossed absently over his shoulder.

She glanced down at the front of her gown. “It’s ruined.” She pulled at the soaked fabric. Who was this impertinent man?

“Better a bit of silk and lace than yerself, I’d say.” He stopped examining the charred concoction on the floor and looked up at her again, inquiry shadowing his deep blue eyes. “Ye are all right, aren’t ye?”

“Of course, I’m all right.” She just wished she could say the same for her gown, her new boots, and her creation. “Why shouldn’t I”—she started to say as he stood—“be,” she finished after swallowing. Goodness he was tall and broad-shouldered, dwarfing her not petite height which, of course, was no reason for her tongue to trip over itself.

“I don’t understand how that could happen.” She bent forward, gathering up yards of silk. “I was so careful not to get too close to the flames.”

He shrugged as if to say she could see the proof herself which she did in the form of wet, seared yellow silk.

“Well, it must have happened when you came toward me. When I looked around,” she added.

Again he just shrugged, a gesture she was beginning to find annoying. He used her fire-fighting towel to lift one of the pans containing the burned remains of her afternoon’s work.

“What was it?” he asked, giving her that smile again.

“A cake,” she answered, grabbing the pan and burning her palm. She did her best to muffle her gasp of pain.

“ ’Tis still hot,” he told her... a bit too late in her opinion, but she thanked him anyway. The tilt of his head showed he doubted her expression of gratitude.

“That won’t be necessary. I’m fine.” But her words did not stop him from prying her fingers open to examine her palm. His hands were large, sun-darkened, and surprisingly gentle.

“Are you a physician, then?”

He surprised her when he threw back his head and laughed, a deep booming sound that made Biddy, cowering by the doorway, look up. “Hardly,” he answered. “Just a man who’s seen his share of burns and scrapes.”

Cinnamon managed a half-smile. “How interesting.” He still held her hand, which wasn’t unpleasant but was highly improper, as was this meeting. She pulled her hand free, then surveyed the puddled, soggy, burned cake with a sigh.

“I wouldn’t think they’ll be too angry with ye.”

She lifted her wet skirt as she stepped around him, then paused and caught his eye. “Who?”

“Why, your employers, lass. Though I’ve been told Mrs. Murphy can be a bit demanding, the old captain seems right enough.”

“Aye.” He smiled down at her. “But then ye would know better than I.”

“Yes, I imagine I would,” she agreed, amused despite his forthright comments about her parents. He thought she was the cook—in a silk gown and kid boots?

“And perhaps they won’t find out,” he said, waving aside some lingering smoke. “I know for a fact that Mr. Murphy is not at home, or at least he wasn’t ten minutes ago.”

“And just how do you know that about my... my employer?” Cinnamon ignored Biddy’s startled gasp.

“I have an appointment with him in the library,” he added a bit pompously. Then his eyes widened as if he just realized what he’d said. He muttered a curse, then a quick apology. “I’d like to stay and help ye clean up the mess”—he ineffectively swiped at the water stains on his trousers—“but I fear I may be late for my appointment. Even though it was Mr. Murphy himself who was tardy to begin with. But I suppose schedules are different for the wealthy,” he said, grinning.

“You’re probably right.” Cinnamon gave him her best smile. He really was handsome. She couldn’t help adding, “You won’t be telling Mr. Murphy what I did now, will you? I mean the fire and all.”

“Well, I suppose I could be persuaded not to mention what I know—for a price.”

“A price?” She cocked her head, looking at him through her lashes. Did he mean to extort money from her? Perhaps he did know who she was. Perhaps he had finally realized that no cook would be wearing yellow silk and kid boots. “Whatever could that be?”

He rubbed his chin as if deep in thought. “A kiss would no doubt seal my lips.”

“A kiss?” She certainly hadn’t expected that. Her smile faded.

“Good at baking cakes,” she finished for her hapless maid, who unfortunately had picked that moment to regain her tongue.

“A kiss it is,” she said, quieting Biddy. Despite the fact that she’d never see this man again, she didn’t want him to know she’d been making light of him. She saw no reason to embarrass him. After all, he had tried to help her. Perhaps a bit overzealously but still...

Besides, what could it hurt? She’d let him give her a peck like her fiancé, Lord Alfred, had. Then he’d be off to see her father, none the wiser.

She took a step closer and lifted her cheek. She caught the hint of a wicked grin moments before she was swooped against his broad chest. “Oh my...” The words were barely out of her mouth before firm, sensually chiseled lips covered hers. Heat raced through her—and tingles. The same sensation she’d felt in her toes at his smile now zinged through her body.

His tongue ventured along the seam of her lips and her mouth opened. When her tongue met his, pure pleasure sent her spiraling. Dizzy, she lifted her arms, grasping his shoulders for support. But soon even that wasn’t enough and her hands curved around his strong neck, twining in the black curls at his nape. Delicious...

The Last Pier by Roma Tearne
Bedded by the Trillionaires (Menage for Mankind Book 4) by Ella Mansfield
Magic Under Glass by Jaclyn Dolamore
The Madness of Viscount Atherbourne (Rescued from Ruin, Book One) by Elisa Braden
Running Dry by Wenner, Jody
3 Lies by Hanson, Helen
A Mosaic of Stars: Short Stories From Other Worlds by Andrew Knighton
Tim Connor Hits Trouble by Frank Lankaster
Falling for Your Madness by Katharine Grubb
While We're Far Apart by Lynn Austin