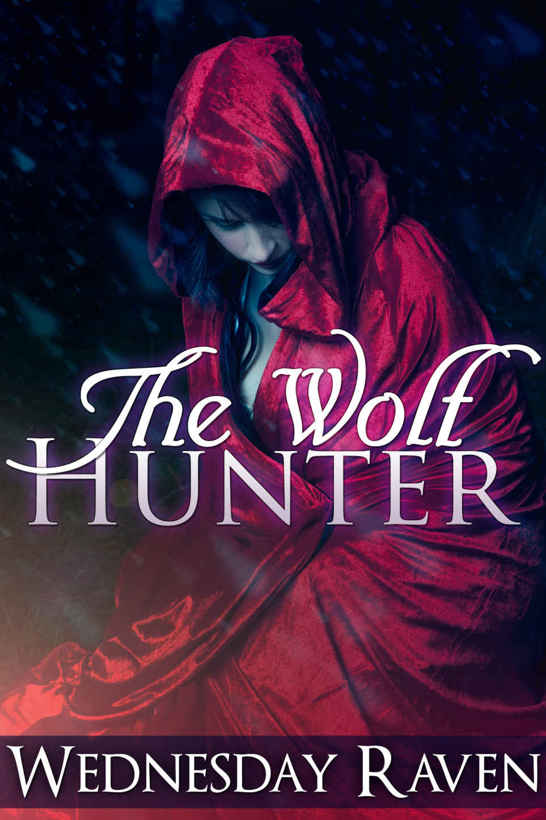 ~~~This shape shifting tale is a STANDALONE SEXY SHORT STORY, not a novel ~~~

Lilith Burns had spent her entire 26 years of life in search of destroying every wolf she finds. It seemed right, seeing as how wolves were responsible for her parents' murder.

Abraham Jackson has spent three decades trying to come to terms with running a successful business while keeping his wolf shifter ways a secret from everyone.

When all Abraham wants is curvy Lilith, and all Lilith wants is to kill all of his kind, is there some common ground where the hunted and the hunter can find love?

Sign up for Wednesday Raven's hottest new releases and book promotions at:

"You're killing me here, baby," he groaned. She could see his eyes start to fade in and out from his normal human brown eyes to the clear blue eyes of his wolf.

"Well, I don't want to kill you anymore, so I guess I better help you out," Lilith purred with a devilish overtone.

She stopped her licking and sucking and positioned herself right on top of his erect shaft. She slid herself just an inch or two down onto it, and then rise completely off, slowly and seductively teasing him. After a short while, he was starting to breathe erratically; his pulse high. She took that as her sign and plunged herself full onto his cock. She pistoned back and forth, grinding her clit on his pelvis, creating exquisite sensations inside her. Her moans mixed with his until they were both breathless with passion.

Back and forth they rocked into each other. Building up into a fury.

"Do you love me, Lilith?" he asked, holding her still on him before getting his answer.

Chapter One: A Walk in the Park

Chapter Three: The Call Back

Chapter Five: Struggle in the Forest

Promo for Bearly Hanging On

Promo for A Wolf in Sheep's Clothing

Lilith roamed the woods every night. Not for a love of the countryside, not for a love of nature, but from pure, unbridled hatred. She roamed these lush fields and admired the stately trees armed with a crossbow, determined to wipe out every wolf she crossed paths with.  She didn't want to be a wolf-hunter when she grew up, it just happened. She had made peace with it.

Her parents were still young, celebrating their sixth wedding anniversary when they were brutally mauled outside of a cabin rented for a special retreat. Lilith, only five at the time, remembered it vividly. How their coffins were closed because the mortician couldn't make them bearable for an open casket funeral. How she cried every night. How every night since she'd heard the wolves, could smell their presence, and vowed to eradicate them all. She had no time for play, no times for friends, and certainly no time for a significant other. Her calling, her destiny, was in collecting wolves.

Abraham was conflicted, still learning his skills as a wolf shifter. It took many years for him to come to terms with it. He lived his life caught between trying to keep it a secret from everyone and finding someone to share everything with. Rich and powerful in the business community, everyone adored him. Everyone, but the one woman who he wanted most; curvy Lilith.

Chapter One:
A Walk in the Park

Lilith jogged every morning starting at 6AM on the dot. She did it if it were raining or snowing, hot or cold, no matter the weather. There was something therapeutic in the way that her shoes hit the pavement causing her muscles to ache afterwards. The reason she did this so religiously were plentiful; it kept her mind free for a little while and off the rage that was inside her and it helped keep her in the condition she needed to be in to hunt at night. What it didn't do was whittle the curves off her body. She gave up on that years ago and now embraced how she looked. Her mirror told her each morning she was a sexy machine that was more fit than many of the stick-figure girls she knew at the gym.

After a two mile run, Lilith did her cool down by walking a couple of miles in an area of the park she rarely visited, having kept mostly to the paths designated for runners. She weaved around the magnolia trees, stopped to pet a wayward Labrador Retriever, and took a seat next to a food cart vendor.

She surveyed the park, taking in all the happiness that was already abundant there; moms with toddlers, newly matched couples walking hand in hand, even single people perched near trees reading a book. She knew none of that down time. Every moment of her day was precisely scheduled to provide maximum efficiency. She was a woman on a mission.

It was that maximum efficiency that made Lilith look at her watch, sigh, get off the bench and start headed back to her apartment for a shower before hitting a job interview that was scheduled. If she could nail this interview, she'd be making the same amount of money as her bookstore job, but be putting in half the hours. Less work meant more time to do her true passion.

With each step that brought her closer to her apartment, Lilith assessed her life since her parents died. After finally getting out of state run care facilities at 18, she'd spent the last eight years with the primary goal of retribution. She bought a crossbow, took lessons, and became an expert markswoman. She lived five miles from the retreat where her parents were massacred. Each night, she threw on a cape, grabbed the crossbow, and set out for target practice. Most nights it was a lesson in futility without seeing any wolves. Some nights they were still too quick. Then there were those few and far between nights where she got her wolf and went home satiated; able to sleep without the nightmares. Only on nights of a kill did the nightmares leave her.

With one hour left before the big interview, the water felt good against her skin. Left as hot as she could bear it, it was therapeutic, helping to cleanse not just her body, but her soul as well. She stepped out into the steamy bathroom. Her long dark hair dripped onto the towel wrapped around her, as she meandered through the bedroom in search of the right clothes.

"I hate having to decide what to wear. I'm never good at this." She said, as she pulled outfit after outfit from the closet. Settling on a black knee-length pencil skirt, white button up shirt, and some black pumps, she quickly threw her hair in an up-do, wrapped a scarf around it, and headed into the chilly afternoon toward the corporate offices of Therion Graphics.

Kartography by Shamsie, Kamila
Forbidden Fruit by Ann Aguirre
The Soul's Mark: HUNTED by Ashley Stoyanoff
When You Were Mine (Adams Sisters) by Byrd, Adrianne
Kill Two Birds & Get Stoned by Kinky Friedman
Even the Butler Was Poor by Ron Goulart
WidowsWickedWish by Lynne Barron
Winging It by Deborah Cooke
Chosen by Lesley Glaister
Dare to Dream by Debbie Vaughan