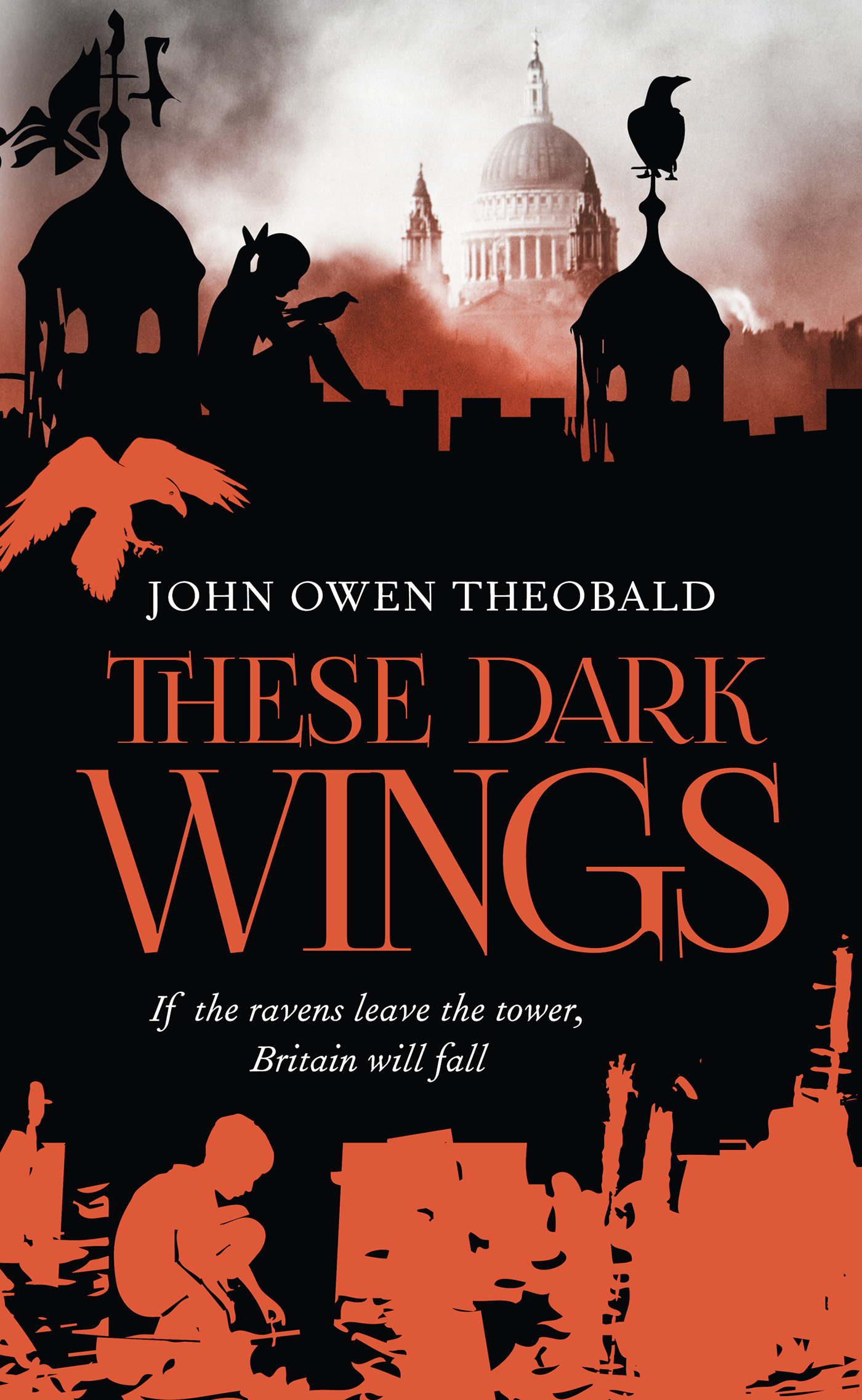 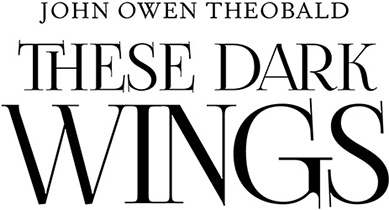 About
These Dark Wings

To read this book as the author intended – and for a fuller reading experience – turn on ‘original’ or ‘publisher’s font’ in your text display options.

If the ravens leave the Tower, the kingdom will fall... 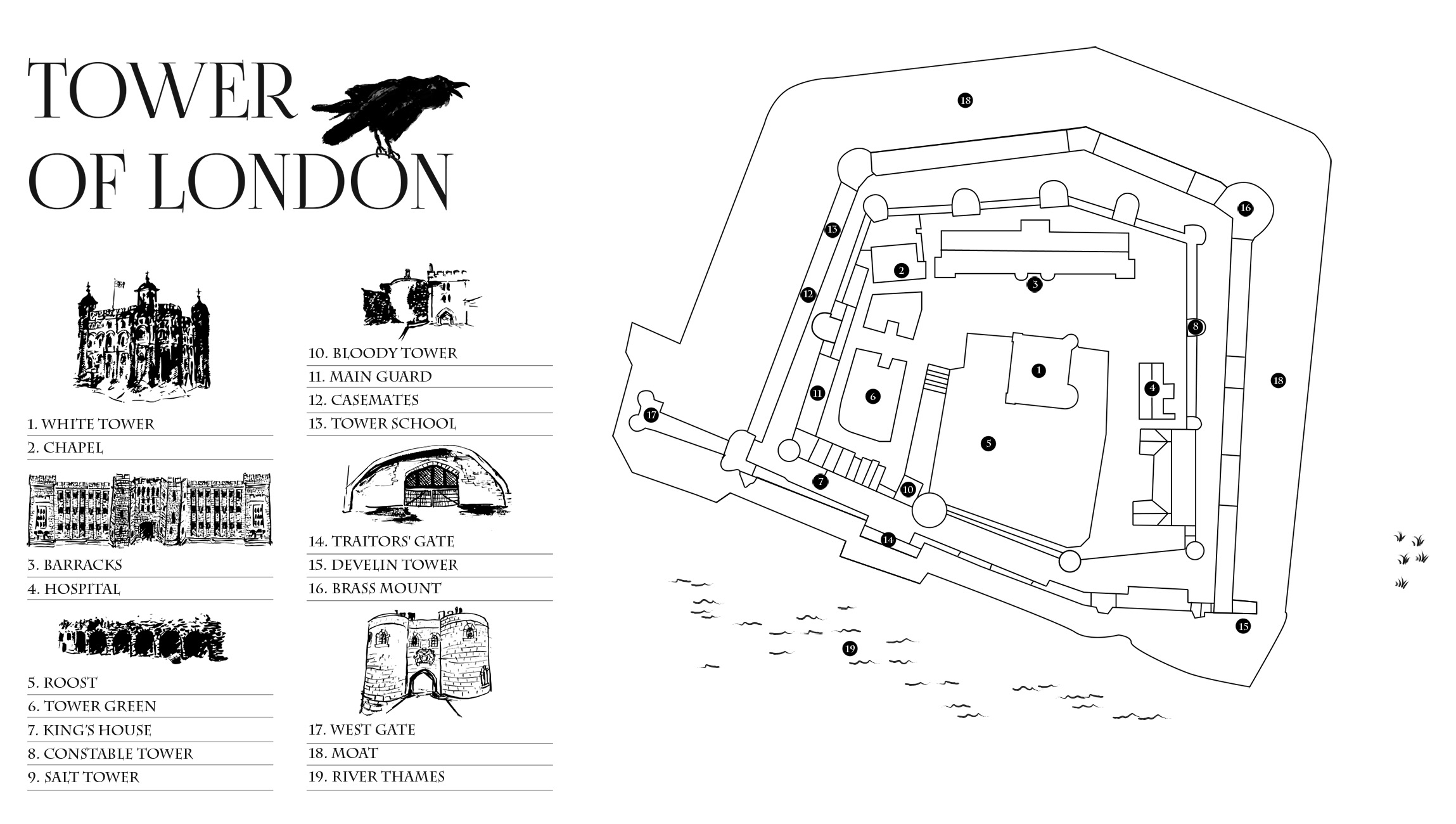 In England they’re filled with curiosity.

They keep asking, ‘Why doesn’t he come?’

Be calm, be calm. He’s coming.

There were three ravens sat on a tree.

They were as black as black could be.

Then one of them said to his mate,

Where shall we our breakfast take?

Part I: The Tower and The Prison

Part II: The Lion and The River

Part III: The Ravens and The Ruins

Part IV: The Fire and The Moon

About
These Dark Wings

I
THE TOWER AND THE PRISON

These cruel, wanton, indiscriminate bombings of London are, of course, a part of Hitler’s invasion plans. He hopes, by killing large numbers of civilians, and women and children, that he will terrorize and cow the people of this mighty imperial city. Little does he know the spirit of the British nation, and the tough fibre of Londoners.

The shelter was under the playing fields at school. We weren’t inside for long, but it was sunny and I felt every minute in the hot darkness. Hitler had started bombing in the daytime. Afterwards I heard that a shell had hit near our street, and some motor cars and a bus had crashed. People were killed. My form teacher told me that. Bus 414, she said.

All I thought of at the time was how much better the school shelter was than the flimsy Anderson shelter in the garden (
always
filled with spiders and earwigs), and that Mum would be happy I was here. I did not think of where Mum was.

It wasn’t so close, but she liked the walk to the Underground. Mum only caught the bus to the tube station if the hot water had run out or breakfast had been burnt. She worked at the
Evening Standard
, as a journalist. I said it was all a mistake, that Mum was fine. Maybe she had not gone into work at all today. If they’d just let me go home, she would be in the kitchen making cheese on toast, worried about
me
.

I wasn’t allowed to go home.

Long after all the other kids had left, I stayed at school, wishing that my best friend Flo could be with me, but she was already on her ship to Montreal. I sat in the office with the headmaster, who watched me from over his papers with a queer expression. Even though I still had my book on the Stuarts from Mr Fenwick’s history class, all I could do was stare at the words – strange, meaningless.

Then someone from the Women’s Voluntary Service came and sat in the chair next to mine. I was told that, during the incident, Mum had been on bus 414. I was told that on Friday, 27 September, Mum had died.

It wasn’t possible. It simply... wasn’t. The headmaster smiled weakly, the woman not at all, and the sun was bright at the window and I was still at school.

Raids at least happen quickly. They are endless, of course, but things change – die, explode, vanish. In that chaos, things
happen
. That afternoon, nothing happened at all. I stayed in the office.

When night finally came, back down to the shelter we all went. That raid was one of the worst. I sat on the hard bench with the headmaster and the serious woman, the warden leaning against the wall. An old man, I remember, tried to push inside carrying a cage with a budgie in it. The warden shook his head. He didn’t even move from the wall.

That made me sad. I wanted to say something, to yell out, to beg them to let the man and his stupid bird come inside. They didn’t come back but a few others arrived, and soon it was warm and clammy with all the bodies. The warden, in his overalls, wellies, and steel helmet, must have been sweating. I sat in silence as the raid pounded on.

In the morning, I was in the office again. Someone else from the WVS came, with the same purple and bottle-green uniform. She held out a bag of things from the house. My blue hairbrush, Pond’s cold cream, some pictures (not the coloured photograph of Mum sitting at the kitchen table with Father and me – where Mum looks like Vivien Leigh but with fox-coloured hair).

Clutching the bag, I was ushered into the darkness of a taxi.

The croaking of the ravens drags me into the present. No more memories: this is my life now. My old life ended a long month ago on that horrible day.

I stomp my feet in the cold dawn air, and inch closer to the series of giant, open-air cages built into the ancient wall of the Tower of London.

Yes, yes, I am coming. I walk forward, shoulders tightened, and wrench open the stiff wire gate. If ravens are so smart, how come they do nothing all day but bury the same scrap of food over and over again? If they’re really such ‘sophisticated birds’, why can’t they understand the simplest gesture? No, Uncle Henry must have got a piece of shrapnel in the head. The Tower ravens are just as dumb as any other bird.

Greedier, though. And feeding them is my job.

The great head turns, studies both me and the chopped meat, deciding which is the meal. Then the razor beak begins tearing and pulling, eyes never leaving mine.
For now
, the look says. I fill the water bowl and move on. Black eyes follow me.

The sun begins to rise. High above, the day looks like it will be empty, clear. Down here, mist still clings to the stone. The White Tower, the oldest, tallest building – the heart of the Tower of London – is also the home of the ravens. As I reach the second raven, a shiver runs through me. I am cold, not
afraid
. They are only birds.

I yank open the cage. Croaks issue from the dark before the large bird strides free. He pauses, gazing over the Green, before turning to his meal. I try to keep my voice neutral.

I receive only a sideways glance for my role as servant.

‘Just feed the ravens,’ Uncle answers whenever I start to ask questions. ‘Remember their names, and give them their meal.’

Uncle Henry is an important man in the Tower. Everyone calls him ‘Ravenmaster’. He says I am brave for a little girl – I am
not
little, I am almost thirteen – and so he can trust me with the dawn feeding. But I know there are other reasons. When I was first brought here, Uncle proudly marched with the sunrise. Each day he came to the roost later and later, his hat sliding down his tired face. Now he does not come at all.

I can handle feeding some giant birds. The bucket is heavy, the measurements confusing, but I have learned these past weeks. Hold the bucket grip in the middle, let it swing with your steps – that way, the mess will not slop over the rim.
Never
forget your gloves. The leather is warm, the cage wires cold, and the ravens’ beaks like metal. Always they are sharpening their beaks.

At least four ounces of raw meat (Uncle chopped it last night) and two biscuits, soaked in blood, placed well out of reach. Much easier than the evening feed, which Uncle still does, when the birds are alert and irritable. They hate the bombs as much as the rest of us.

Greet each bird by name.

A girl bird, as if it makes any difference. Even though I have tried to imagine her croak as softer, lighter than the others, it is the same low, gurgling noise from deep in the throat.
Orrk. Orrk.
Grey breath steams from her black beak.

‘Be honest with me, Cora. Uncle is only teasing, isn’t he? I mean, can
you
really be a Guardian of the Empire? You’re a bird, and a bird that can’t even fly.’

A cold wind blows against the castle.

The Chronicles of Robin Hood by Rosemary Sutcliff
The Rubber Band by Rex Stout
Korea by Simon Winchester
Tales of the Flying Mountains by Poul Anderson
The Inner Circle by Brad Meltzer
Centauriad 1 - Daughter of the Centaurs by Klimo, Kate
The Russian Jerusalem by Elaine Feinstein
Naughty In Nice by Rhys Bowen
The Baby Truth by Stella Bagwell
The Mortal Instruments - Complete Collection by Cassandra Clare