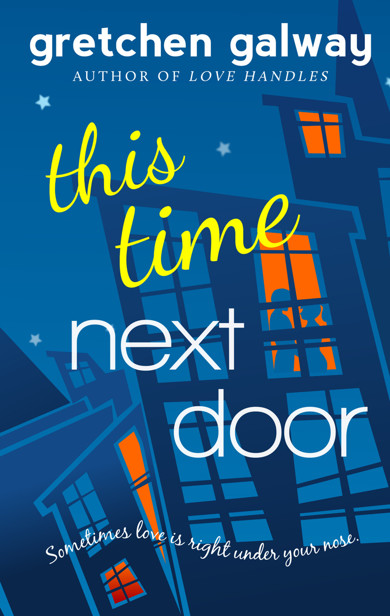 Sometimes love is right under your nose...

Sometimes love is right under your nose…

Readers first met Mark Johnson in
Love Handles
as Liam’s brilliant but awkward younger brother. In
This Time Next Door
, Mark the software engineer decides to break away from his computer and get a life, starting with the petite woman who’s moved in next door. But when he meets her large, blond housemate, Rose, he starts to dream… bigger.

Twenty-six-year-old Rose Devlin may shop in the plus-size department, but she’s never had a problem attracting men—with disastrous consequences. Recovering from her latest mistake, Rose has sworn off casual flings and moved to California to grow up, help her best friend, and make something of herself.

When Rose asks the cute-but-geeky Mark to help her land a job in high tech, she never expects to unearth his quiet strength, stunning accomplishments—and hidden talents. With a secret in her own past, Rose tries to keep her distance, but she finds that nerdy Mark isn’t so nerdy when the lights go out. And that maybe, just maybe, she’s not too grown up to risk one more disaster…

IT WAS THE FIRST TIME Rose had ever been asked to take off her clothes for a job interview.

“You want me to strip?” Rose asked, surprised. “All the way?”

The woman in front of her wore a measuring tape around her neck and had hair like a snowball, white and round.
Like me
, Rose thought.

“What kind of bra are you wearing?” Snowball asked, looking her over.

Rose glanced down at her chest, unusually compressed for the occasion. “It’s a sports bra. Brand new. I thought, since you’re looking for a model for workout clothes, I should—”

Rose paused. “What about them?”

“What kind of underpants?”

This is a very odd conversation
. The receptionist had sent her up to the engineering floor for her appointment, and Snowball had ushered her down a hallway without any preamble, not even a quick exchange of names.

“They’re just… regular,” Rose replied. “Not a thong or anything.”

The woman nodded. “Good. We’ll need to know your real numbers. We’ll add on a little for the bust. Just strip down to your underwear and let me know when you’re ready.” She nudged Rose deeper into the storage closet and pulled the door shut between them.

Rose looked around. She’d imagined something a little more glamorous than a dim closet overstuffed with clothes on racks and sagging shipping boxes. Maybe the fashion industry in San Francisco was as casual as everything else on the West Coast. And, of course, Fite Fitness was just a fitnesswear company, not couture or anything.

She unzipped her knee-high leather boots and pulled them off, unwound her favorite silk scarf, then stripped off her low-rise black pants and magenta wrap sweater and folded it all into a neat pile. Wearing only her underwear and jewelry—a trio of long silver necklaces and assorted bangles—she peered into the small mirror on the wall to check her lipstick.

Satisfied, she pulled open the door and strode out into the workroom.

It was drafty. She hoped she didn’t have to wait out here like this for very long. Snowball was nowhere in sight, so she walked down the hallway and past a row of long, flat tables covered with patterns, bolts of fabric, piles of clothes. “Hello?”

A bald man in his fifties with purple reading glasses glanced up from a table. With a start, he dropped his pencil and stared. “Plus-sized fit model on the loose!” he called out.

“Where is she?” Snowball asked from behind her. Then, “Oh!”

The man picked up his pencil and went back to work.

Another head popped up from another table off to the side. The young woman’s dark eyes went wide.

Rose turned to Snowball. “Sorry. Was I supposed to stay in the closet?”

There was a snort from the man at the table.

Shrugging, Rose walked back to the closet, head high. “I’ve never done this before.”

The woman joined her in the closet and shut them inside. “Have you done any kind of modeling?”

Oh, sure. Whenever I’m not selling used paperbacks on Amazon to pay off my college loans.
Keeping a straight face, Rose said, “It’s been a few years.”

“You’ve got the hair for it. And the skin.” Her gaze dropped down over Rose’s exposed, pale form.

“Thanks.” Rose was used to people complimenting her Barbie-like blond hair and peaches-and-cream complexion. Right before they suggested how lovely she
could
have been if she’d just stop eating. “By the way, what’s your name? I like to know the names of people I get naked with.”

The woman glanced up at her over her bifocals. “Meryl.” She peeled off one of the measuring tapes dangling around her neck and moved closer, her arms extended in front of her like a cartoon zombie. “Hands up. And don’t suck anything in, please.”

Rose did as she was told, feeling the brush of Meryl’s fingers against the sensitive flesh of her waist, the small of her back, her abdomen. The tape met over her tummy in the woman’s small hands.

Don’t suck it in.
What did that mean? It was impossible not to tense a little bit under the circumstances. Taking a shallow breath, Rose looked over the woman’s fluffy white head and focused on a very slim pair of black running pants hanging on the back of the door. “You’re just starting a plus-sized line?”

“Mmm,” Meryl said. “Waist, thirty-five and a quarter.” She let one end of the tape fall to the floor as she jotted a note in a yellow pad balanced on top of one of the lopsided boxes. “That might be a problem. We’re looking for thirty-six.”

“In the waist, anyway,” Meryl said, staring at her chest.

“I told Blair I didn’t know what my measurements were, but she said you guys wanted to meet me anyway.”

“Plenty, as it happens,” Rose said.

Meryl leaned in to measure her bust. “Arms up again, please.” She slid the tape back and forth, paused. “Forty-five and three-quarters. But I’ll have to add on an inch to allow for the bra.”

Rose stared at the ceiling as Meryl went back to her notebook, muttering, “Forty-six and three-quarters.”

This was unexpectedly awkward. When Rose’s roommate had told her about a job that paid seventy dollars an hour just to try on clothes, she’d been happy to hop on the first BART train to San Francisco. She hadn’t considered how being poked and prodded might make her feel like a twelve-year-old undressing in the school locker room for the first time.

Meryl wrapped the tape around her again. She wiggled it down to Rose’s hips, holding on with one hand as if she were lassoing a calf—

Don’t go there, girl
, Rose told herself.
Chin up. Big and beautiful.

“Forty-eight and a quarter,” Meryl said, draping the tape around her neck. “Well, that one’s a deal-breaker.”

Moving to the door, Meryl tucked her yellow pad into her pocket. “You can get dressed. I won’t need the rest of your numbers.”

Rose propped her hands on her hips. “Too big?”

“A little bit. Thanks for coming in… uh…” She stared.

“Right,” Meryl said. “Rose. Thanks for making the trip. You can bill us for the full hour.”

Rose let out the breath she’d been holding. So much for that. For a few days she’d enjoyed a little fantasy about making some easy money. It would’ve been fun to tell people she was a model.

“If you lose a few pounds,” Meryl said, “Call us. We could measure you again.”

Rose flashed a half-smile. “Don’t count on it.”

With a shrug, Meryl said, “Best of luck to you,” and closed the door.

While she got dressed, Rose faced the hard facts. She was unemployed and thousands of miles from home. Her monthly college loan payments were killing her. The glamorous world of plus-size fashion didn’t want her.

She draped her scarf around her neck, combed and fluffed her hair, looked around the dingy closet.

Just as well. She was twenty-six, long past time for her to find a real job.

Preferably one that didn’t involve taking her clothes off.

“Mom, it’s no big deal. I just didn’t have the measurements they were looking for,” Rose said.

She heard her mother’s answering sigh through the phone.

“It wasn’t real modeling. Just trying on clothes. Like sweatpants and stuff. I had to get naked in a closet.”

“How about other companies? Isn’t the Gap in San Francisco?”

“As if the Gap needs a plus-size fit model, Mom. They’d take one look at me and laugh.”

Rose ducked into the drugstore on Market Street and bent over to grab a basket. “You’re right. And I get my looks from you. So how come you’re always putting yourself down?”

“You get your brains from me. Which I’m happy to take credit for.”

Rose shook her head as she made her way past makeup and moisturizers to the shelf of nail polish removers. She had to put the basket on the floor to free up a hand to claim the biggest bottle. “You should look in a mirror sometime, Mom. You look just like me.” She found a bag of cotton squares. “Just a little older. A
very
little bit older.”

Her mother sighed. “Nobody ever thought we were sisters, honey. Big women always look older than they are, even at eighteen.”

“I thought you were seventeen.”

Rose laughed. “Oh, right. That was just the conception.”

“You promised you weren’t going to joke about that anymore.”

“Only around Slug. Or do you think he’s listening on the other line?” Her mother’s new husband was not her favorite person.

“I’m serious. Perhaps I should hang up.”

“No, don’t. I’m sorry,” Rose said. “Look, I’m in a CVS in downtown San Francisco getting the supplies for a manicure. I’m just… I guess I was feeling homesick. I miss you. I’m
thousands
of miles away. I know other people live like this, but I didn’t think we would. We’re close.”

“Enjoy your freedom. You’re young, you’re single, and you’re doing something wonderful for a friend.”

Rose could hear the longing in her mother’s voice. Becoming a single mom at eighteen had changed everything, even with a supportive family. She’d had no opportunity to be young and free.

“You always pick colors that are too loud for me.”

“You look great in brights. No point trying to hide if you’re three hundred pounds, might as well—”

“You do
not
weigh that much,” her mother said.

Her mother fell silent for a moment while Rose studied a bottle of iridescent dark purple. “You enjoy yourself out there in California. I can get my nails done at the salon.”

“It’s only until the baby’s born. Or Blair changes her mind about living with the father’s family. How’s she doing?”

“Better. Though she throws up a lot.” Her roommate and best friend, Blair, was unexpectedly pregnant. The charming, handsome sperm donor hadn’t wanted her to keep the baby, but his mother had. Desperately. The woman offered Blair a house, financial support, family—three things Blair lacked. She only had to move across the country to California to get them.

Rose had joined her to offer her support. In exchange, Rose would finally get to spread her wings, grow up a little. Except for three years of college, she’d lived at home her entire life. And since her mother had remarried, home wasn’t as homey as it used to be.

“You’d forgive him for abandoning her to this? You? Ms. Teenage Single Mom?”

“Don’t interfere,” her mother said. “They need to figure this out on their own.”