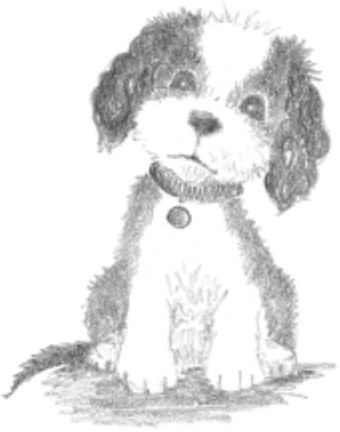 Mrs Jones had given them a special box for carrying Timmy home. Katie was a bit disappointed, as she’d been looking forward to cuddling him in the car, but Mum said it might be dangerous if he wriggled out of her arms. He’d feel safer in the box.

Katie wasn’t so sure. She hated hearing the snuffling, whimpering
noises that Timmy was making behind her seat. He didn’t sound happy at all.

“So when we get home, we’re going to let Timmy out into the kitchen, girls, that’s the plan,” Mum reminded them. “He needs to get used to the house slowly. Remember he’s only been used to staying in the puppy room. The whole house would be a bit daunting for him. And then we need to introduce him to Misty very carefully.”

“Can I show him my bedroom?” Katie asked hopefully.

“I wouldn’t just yet,” Dad told her, as they turned into their road. “For a start the mess would probably give him a heart attack…”

Katie grinned. That was true. Timmy could quite easily get lost in
there. As soon as the car stopped, she struggled out of her seat belt, her fingers clumsy with excitement, and gently lifted Timmy’s box out of the back. She could feel him skidding about inside, even though she was walking so slowly and carefully. “We’ll get you out in just a minute,” she whispered. “You can see your new home!”

Katie carried Timmy into the house, and put the box down on the kitchen floor, kneeling beside it. Then she undid the flaps that held it together. Timmy stared up at her, puzzled by his strange, dark journey. But then he recognized Katie, and gave a pleased little whine, scrabbling at the cardboard with his claws to show her he wanted to get out.

“Come on, Timmy!” Katie lifted him out, and cuddled him lovingly. He was staring at her, his big, dark eyes bright and interested. Then all at once he reached up and licked Katie’s chin, making her splutter and giggle.

“Well, I don’t mind if you do that, but I wouldn’t do it to Mum,” she whispered to him.

Timmy gazed at her lovingly. He was a bit confused about what was going on – his brothers and sisters weren’t here, and nor was his mum, but if he was going to get cuddled and played with, maybe it would be all right. 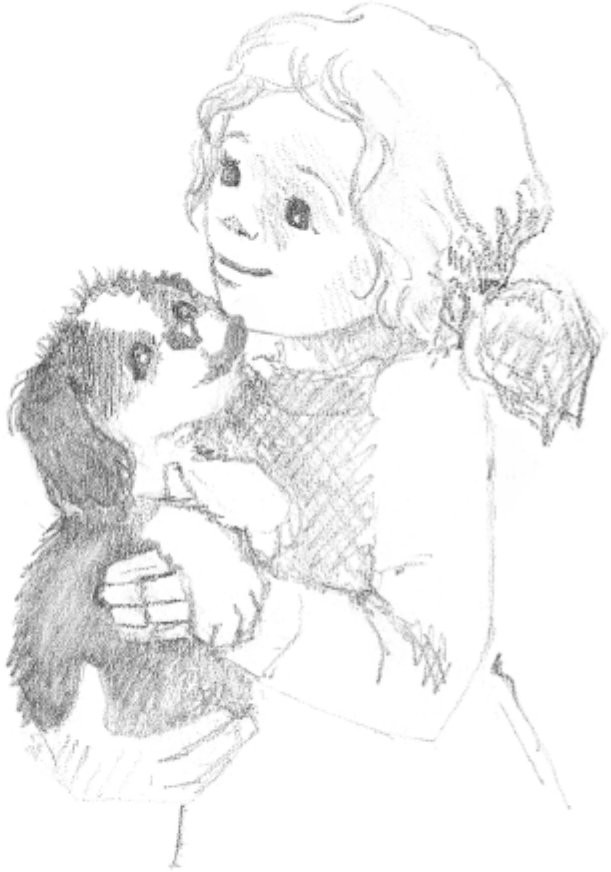 He wondered if there were any other dogs here. He couldn’t smell them, but there was another smell, a different smell that he didn’t recognize…

“How’s he doing, Katie?” Dad had come in from the car. He and Mum and Jess had been chatting to the lady next door, and telling her about their new arrival.

“I’m just about to show him his cushion and his food bowl,” Katie explained. She walked round the kitchen with Timmy, holding him up to see out of the back door. Then she put him gently down next to his cushion. “This is where you’re going to sleep, look.”

Mum came in holding Timmy’s collar and lead. “Don’t forget these, Katie.
Remember what the website said – we need to keep him on the lead in case we have to stop him chasing Misty.”

“Oh, yes!” Katie bent down and fastened the bright-red collar around Timmy’s neck. “Very smart!” she said. She clipped on the lead and Timmy looked at it in surprise. What was this? Oh, a lead, like his mum had.

He sniffed at the big, purple cushion, and sneezed.

Dad laughed. “It probably smells a bit clean. Don’t worry, Timmy, it’ll be nice and doggy in a couple of days.”

Just then, Jess came in, carrying Misty. She’d gone to fetch her from upstairs. Misty spent most of her time snoozing on Jess’s bed.

Timmy was delighted. He peered
up at Misty, his whiskers twitching. So that was what the interesting smell he’d noticed was! A friend! He danced clumsily over to her on his too-big puppy paws, and barked cheerfully to say hello. Katie followed, holding his lead and watching them cautiously. 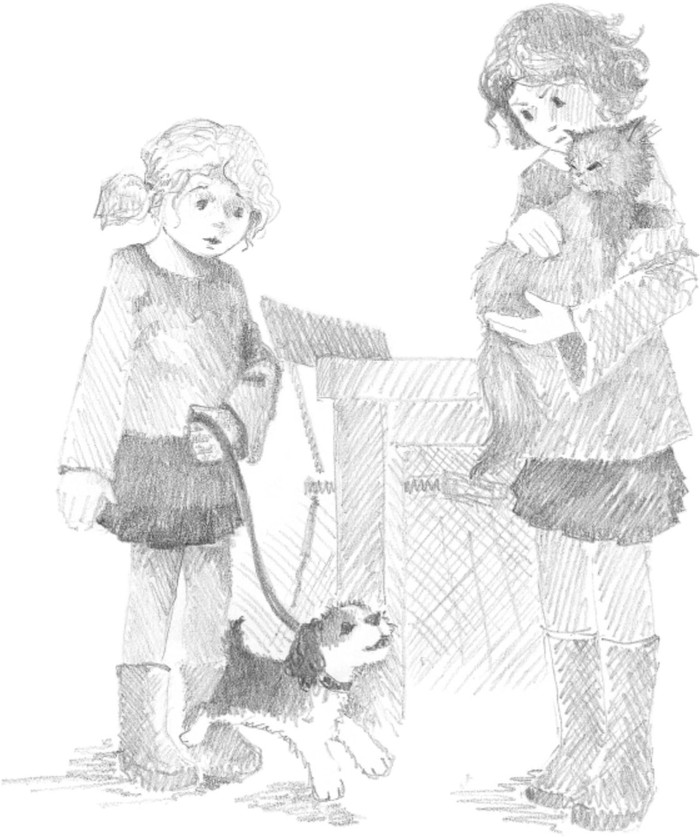 The fur on Misty’s back stood up on end, and her tail fluffed up to twice its normal size. She hissed warningly.
Stay away!

“Timmy…” Katie said anxiously, but Timmy wasn’t listening. He had no experience of cats, so he didn’t recognize Misty’s warning for what it was. He just wanted to say hello to this big, fluffy animal.

Misty hissed again, then yowled and spat, her ears laid right back against her head.

Timmy stared at her, feeling very confused. Then he backed up a little. He didn’t understand what was going on, but he could tell now that something was wrong. He looked up at Katie and whimpered, asking for help.

“I told you she’d hate it!” Jess said accusingly to Mum. “Oh, Misty no!” Misty had jumped out of her arms, and was prowling across the kitchen towards Timmy.

Katie was just stooping to pick him up, when Misty pounced, and swiped her paw across Timmy’s nose – not very hard, just enough to make it clear she really wanted him gone.

Timmy howled in surprise and dismay. His nose did hurt, but it was more the shock of it that upset him so much. He’d played rough and tumble games with his brothers and sisters, but no one had ever scratched him before. He buried his nose in Katie’s jumper, as she picked him up, and snuffled miserably.

Misty hissed at him triumphantly, her fur still bristling.

“That was so mean of Misty!” Katie cried angrily. “All he did was try to say hello, and she clawed him! His nose is bleeding!” She snuggled Timmy close and glared at Jess and Misty. 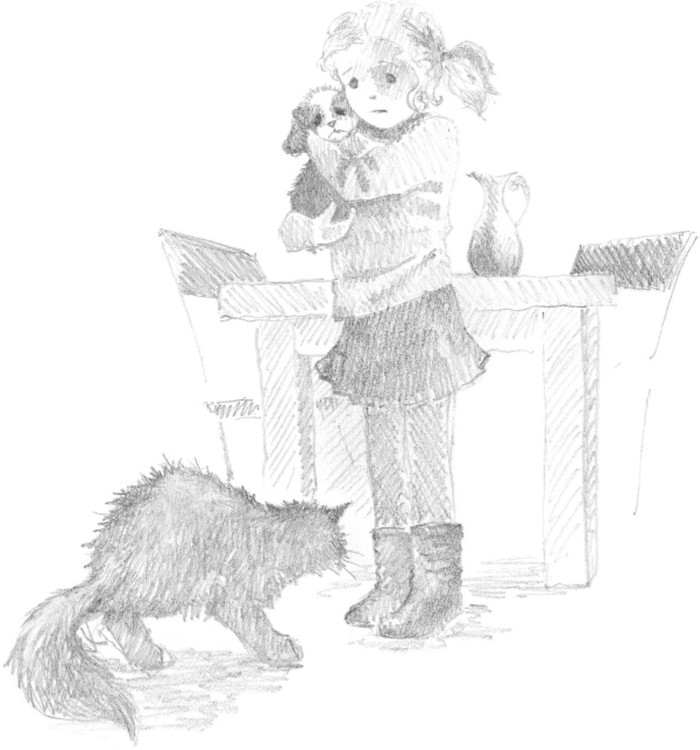 “Maybe we should put Timmy’s cushion in the utility room to start off with,” Dad said worriedly, looking at Timmy’s nose. “I think it’s a bit much for Misty to get used to all at once.”

Jess folded her arms, and stared at the ceiling. “I told you this was a bad idea,” she said. “Misty hates dogs, and this is her home. It’s
never
going to work.”

“Well, now it’s Timmy’s home, too!” Katie snapped back. “Misty’s just going to have to get used to it.”

Katie sat up on her bed in the dark, her duvet wrapped round her shoulders, listening anxiously as Timmy let out
another mournful howl. Everyone had agreed that he would stay in the kitchen and the utility room at first, so he could get used to the house gradually. It was what all the dog books and websites had suggested, especially as Timmy was still learning to ask to go outside if he needed to. Mum really didn’t want him messing up all the carpets.

Mum and Dad had been careful to keep Misty away from Timmy for the rest of the day, after their fight. For tonight they’d put a litter tray in the hall, and Misty was sleeping on Jess’s bed, as she always did. Katie had begged her parents to let Timmy sleep in her room, too, just for his first night, but Mum had said definitely not.

Timmy just didn’t understand why he couldn’t explore the rest of the house. Katie had stayed in the kitchen almost all that day, playing with him, and cuddling him, but Timmy had still been curious about what was going on everywhere else.

That cat was allowed to go wherever she liked, but he had to stay in, except when he was taken into the garden to do a wee. It didn’t seem fair. And when she wanted to be in the kitchen to eat her food, he had to go into the utility room! Why couldn’t he eat with her? She might even have leftovers.

But the worst thing was that now they’d all gone to bed. He had to sleep in the kitchen, and he was all on his own! It was so lonely! Where was everyone?

He howled so much that Katie just couldn’t get to sleep. She sat there listening to the sorrowful wails from downstairs, and eventually she couldn’t bear it any longer. She crept out of bed, wrapping her duvet round her like a cloak and trailing it along behind her. Mum might have said Katie absolutely must not have Timmy in her room, but she hadn’t said anything about not sleeping in the kitchen with Timmy, had she?

Timmy was sitting on his cushion, staring anxiously into the darkness. Like all dogs, he could see well in the dark, but he wasn’t used to being all alone – he never had been before. What if Katie never came back? He didn’t want to be on his own for ever!
Timmy whimpered again, and then stopped. He could hear footsteps, and an odd swishing noise. What was that?

He looked worriedly at the door, hoping it wasn’t something horrible. Maybe the cat was coming to be mean to him again. In his mind, she was about twice her real size, and her tail was enormous. Maybe that was what the strange noise was… Timmy whined nervously.

Katie hitched up her trailing duvet and gently pushed the door open. She called softly to him. “Timmy? Hey, sweetie!” 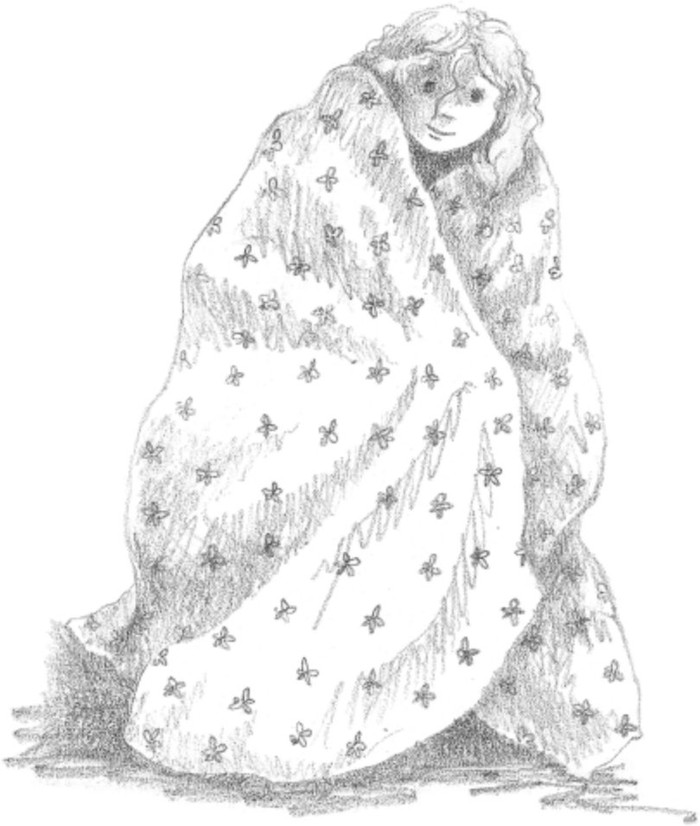 Liabilities by Shannon Dermott
Breach by Olumide Popoola
The Underground City by Anne Forbes
My Masters' Nightmare Season 1, Episode 7 Connections by Marita A. Hansen
Don't Explain: An Artie Deemer Mystery by Dallas Murphy
2 Deja Blue by Julie Cassar
An Obvious Fact by Craig Johnson
A Match Made on Madison (The Matchmaker Chronicles) by Davis, Dee
Away From Her by Alice Munro
The John Milton Series: Books 1-3 by Dawson, Mark