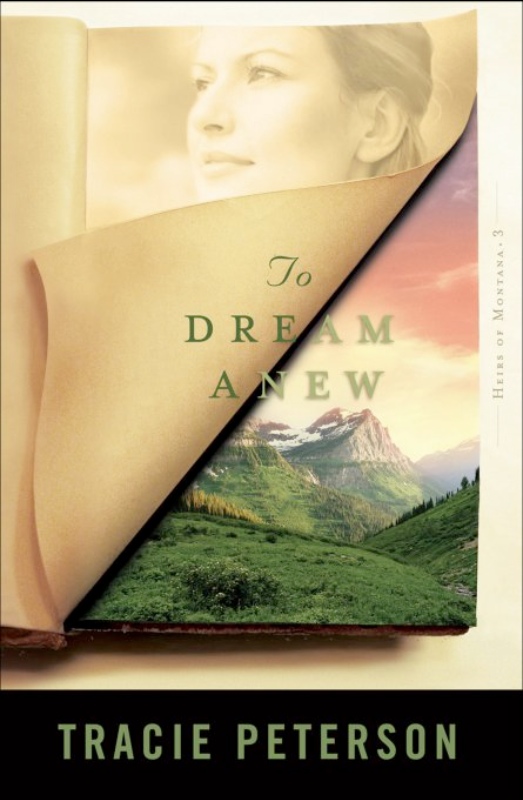 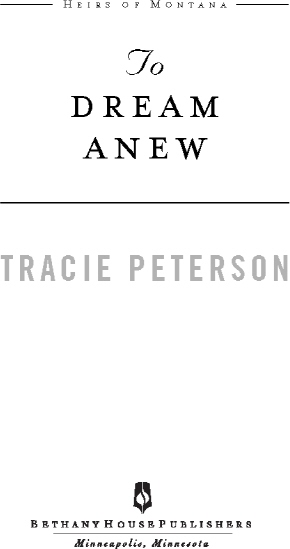 To my Saving Grace Church family.
You’ve all been so supportive and loving,
a wonderful representation of
what the body is all about.
Thank you for your love.

TRACIE PETERSON is the author of over seventy novels, both historical and contemporary. Her avid research resonates in her stories, as seen in her bestselling H
EIRS OF
M
ONTANA
and A
LASKAN
Q
UEST
series. Tracie and her family make their home in Montana.

D
IANNE
C
HADWICK
S
ELBY SAT STRAIGHT UP IN BED
. P
ANT
-ing, she put her hand to her mouth to stifle the scream that threatened to break free. She threw back the covers and ran to the cradle at the foot of the bed. Her six-month-old son, Luke, slept peacefully. His closed eyes and even breathing offered some solace to her frayed nerves.

Looking back to the bed, Dianne was equally relieved to see her husband, Cole, deep in slumber, ignorant of the terror in her heart.

Dianne drew a deep breath and sat down at the foot of the bed. The dream had seemed so real. She could almost hear the screams and cries of the people who were under attack. There had been a great battle. Soldiers and Indians. Even Cole and Lucas had been there.

“Something wrong?” Cole asked in a groggy tone. “What time is it?” He yawned and glanced at the window.

“I don’t know,” Dianne admitted. She got up and looked outside. “There’s a hint of light on the horizon. Probably a half hour or so before dawn.”

“Sure comes early this time of year,” Cole said, moaning softly as he sat up.

“Are your ribs still sore?” Dianne asked, pushing aside the images from the night.

“Yeah,” he admitted. “That horse has a mean streak a mile long.”

“He definitely didn’t take to the saddle,” she said, remembering the strawberry roan gelding. She smiled and went to get the liniment from the mantel. “Here, let me rub some more of this on. Koko said it would do wonders.” Her aunt was especially gifted with healing remedies. Koko was half Blackfoot Indian and had learned many medicinal remedies from her mother. Her knowledge had been a blessing to this family on more than one occasion.

Dianne rubbed the ointment across her husband’s back and side, drawing her hand gently over the bruised ribs. She loved this man more than life—would give her life for him. She thought of her dream and shuddered.

“What’s wrong? Why were you up? Is Luke all right?” Cole took hold of her hand and stilled her ministering. He stared long, searching her face as if to find the answers there.

“I had a nightmare. I dreamed Zane was in a battle. A horrible battle. There were bodies everywhere. Dead soldiers and Indians. Then without warning, we were in the middle of it too, and the Indians were attacking here at the Diamond V.”

Her uncle’s ranch lay in the lush Madison Valley, along a river also named for the country’s fourth president. Uncle Bram had loved this land as much as she did, but now he was gone—killed by a grizzly attack. It seemed only yesterday he had been telling Dianne of his great plans for the Diamond V.

Cole rubbed her hand gently. “It was only a dream.”

Dianne shook her head and gripped his hand. “But there are so many threats of Indian attacks and conflict. Zane’s regiment is moving to the Little Big Horn River, where they plan to help move the Sioux and Cheyenne back to their reservation. What if something goes wrong? What if the Indians stage an uprising?”

“Nothing will go wrong. Your brother knows how to take care of himself. Not only that, but the army is well aware of what’s going on. They are trained to handle these kinds of matters.”

“But there’s always the chance that something could be missed, overlooked.”

“Dianne, it was just a nightmare.”

Luke stirred and Dianne glanced to the cradle. “I couldn’t bear it if anything happened to you or Luke. Or any of the others, for that matter.”

“But we have to trust that God has it all under control,” Cole said with a lopsided grin. “Which is a heap better than taking on that load ourselves.”

Cole pulled her into his arms and together they fell back against the bed. He nuzzled her neck with kisses, leaving her happy and contented with the attention.

Luke began to fuss, then to cry. Dianne watched her husband rise up and look to his baby boy. “Traitor,” he murmured. Then looking back to Dianne, he shrugged. “Another time, I guess.”

She laughed and pushed him aside as she went to tend their son. “At least he’s sleeping through the night. Koko’s children didn’t do that until they were nearly a year old.”

“Hard to believe our little guy is already six months old. Seems like only yesterday he was born.” Cole got up and stretched and winced.

“Maybe you should take it easy today,” Dianne said as she changed Luke’s wet diaper.

“There’s not much time to rest on a ranch this size. I can’t believe the way the herd has grown. It’s a blessing, but it also means more work.” He began to dress for the day as Dianne took her place in the rocker.

She forced herself to relax as Luke began to nurse. She knew she would only frustrate him if she let herself remain tense and her milk wouldn’t let down. Still, the images of the night lingered in her thoughts.

“Trenton told me he was going to take a stab at that roan today,” Cole said, buttoning his shirt. “Your brother is quite good at breaking those green mounts.”

“Trenton seldom has the chance—or desire—to talk to me, it seems,” Dianne said sadly. “We used to be so close. Zane and Morgan had each other. They had a special bond because they were twins, you know…. I could never get in close to either one of them. But Trent … he was different. He cared about what I thought and talked to me long into the night when we were young.”

“He’s a grown man now,” Cole offered. “And no doubt he lived a good deal in his time before joining us here. A man changes. Can’t be helped.”

“Women change too,” she murmured, knowing in her heart she was far removed from the young woman who had arrived homeless and parentless on the Diamond V.

Cole leaned down and kissed Dianne’s forehead. “I’d better get to work. Ring the bell loud and clear when breakfast is ready.”

“No doubt there’s already a pot of coffee brewing on the stove,” she said with a grin. “Probably biscuits baking in the oven too. Faith is always good to sneak over and see to that.” The former slave was a faithful friend and worker on the ranch.

“She and Malachi sure make our days a whole lot easier. We’d all go hungry and have shoeless horses if not for them.” Cole went to the bedroom door and opened it. Looking back, he smiled. “You two make a man proud.” He didn’t wait for a response before heading out.

Dianne shifted Luke and smiled at his greedy feeding. He was such a little butterball. He watched her with dark blue eyes that never seemed to miss a single thing. If Dianne frowned, he frowned too, and if she smiled, his grin was bigger by far.

The dream still haunted her, however. In spite of this peaceful moment and Cole’s obvious love, Dianne felt cold inside. She closed her eyes and saw the battlefield once again. No doubt she was merely recalling the vivid descriptions written up in the newspapers. Journalists seemed to have a flair for the dramatic and graphic.