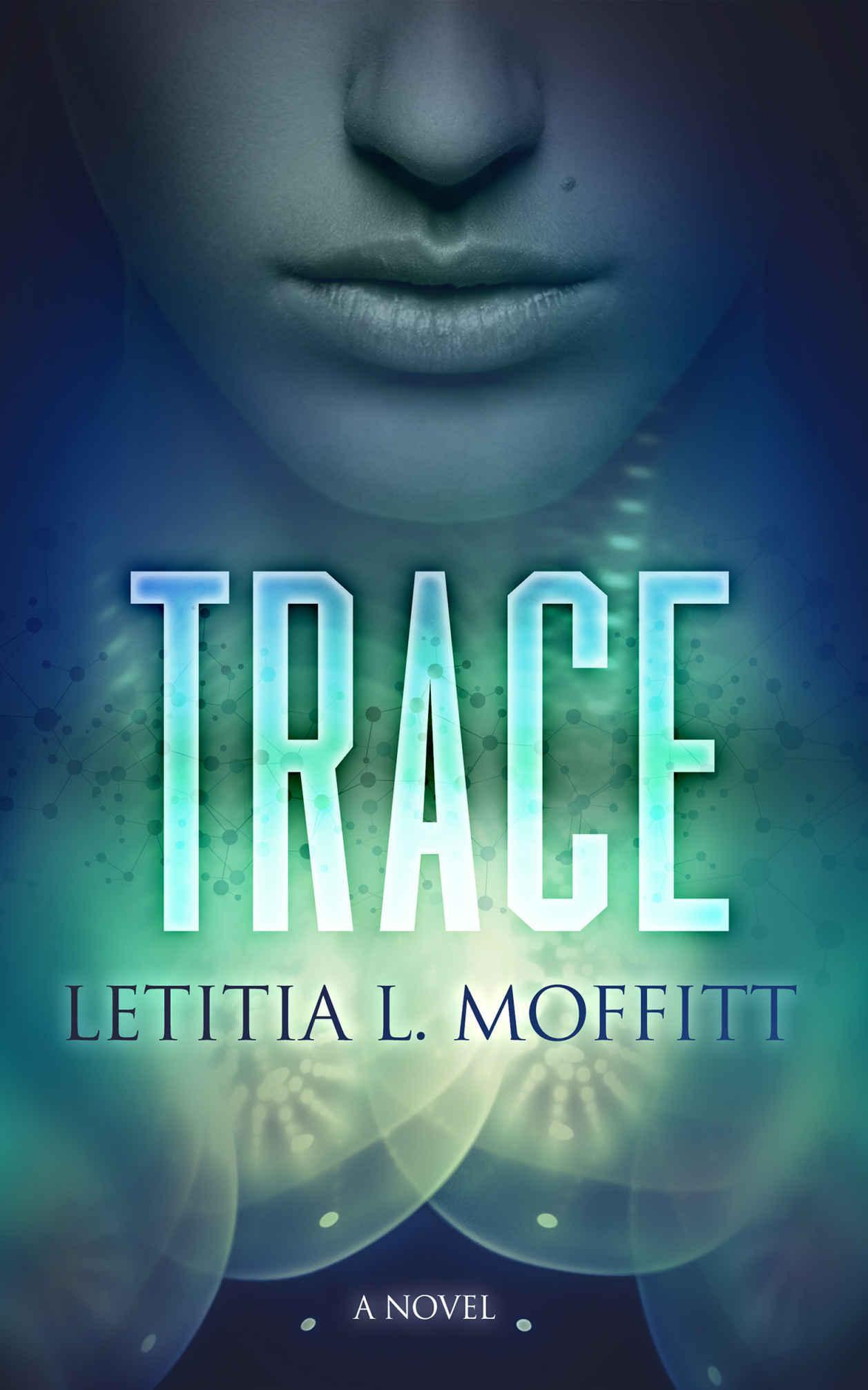 “Letitia Moffitt has a winner with
Trace
! She blends police procedural, supernatural thriller, and romance with a skill which as a writer I admired and as a reader I enjoyed enormously. An engaging protagonist, a deepening mystery, and great pacing add up to a terrifically entertaining read.”

— Frank Chadwick, author of
How Dark the World Becomes

“Trace is funny and engaging, and best of all, a page-turner. Mystery meets paranormal in Moffitt’s big-hearted heroine, Nola. Wholly believable — when you’re done, you’ll wonder where the tracists have been hiding all this time.”

“Moffitt draws a compelling accidental heroine in Nola Lantri, a no-nonsense, crime-solving ‘tracist’ who struggles to be normal despite her paranormal abilities.”

“
Trace
is a wonderful novel—entertaining and suspenseful with a fascinating premise and pitch-perfect writing. What I love most is Nola Lantri, the smart, steely, and often sarcastic heroine who holds her own in a masculine world. More Nola Lantri books, please!”

“In Letitia Moffitt’s gripping new mystery, Nola is a female detective with a unique gift who finds herself dropped into her first case—a case that seems to have a lot of questions, even more suspects, and zero answers. Moffitt’s writing is utterly engaging right from the first page. I couldn’t put it down. If you like Megan Abbott’s style of new noir, then you will absolutely love
Trace
.”

“Moffitt has something here that hints at the layers beneath the surface, of things we want and don’t want to hear.”

“Her stories really build and build and draw you further into the worlds she creates.”

“Moffitt creates complicated, interesting relationships between her characters, whom one can’t help but like and admire, flaws and all.”

All rights reserved. No part of this publication may be reproduced, distributed or transmitted in any form or by any means, including photocopying, recording, or other electronic or mechanical methods, without the prior written permission of the publisher, except in the case of brief quotations embodied in critical reviews and certain other noncommercial uses permitted by copyright law. For permission requests, write to the publisher, addressed “Attention: Permissions Coordinator,” at the address below.

Thanks to Dan Davis, Jeff Kohmstedt, and Mary Maddox for providing terrific feedback on drafts of Trace. Without you this book wouldn’t be here. Special thanks to Mary Maddox for everything you’ve done to make this happen.

Thanks to Ken Welle for reading this entire book on a plane to Miami. I’m glad I got to sit next to you while you did.

Thanks to the Moffitts for your much appreciated support.

Nola’s eyes glinted as some of her audience members shifted uneasily.

“When that happens, your body releases particles of energy. New Agey types might call it your ‘life force.’ I do not.”

She need not have been so forceful with the last three words, as the coolness of her voice clearly dispelled any lingering notions of her as a New Agey type. So did her trim, no-nonsense black suit, lack of jewelry, and straight brown hair pulled back into a tidy knot. It was a look more suitable to someone a lot older, she knew, but that was on purpose; she was 27 but still got carded buying wine and didn’t believe youthfulness in this particular situation was an asset. Before she had been introduced, many of the half-dozen detectives who had assembled for the briefing assumed she’d come from the DA’s office. Now that they knew who she was, many of them still had not wiped the skepticism from their faces ten minutes into her talk.

“Most of the time, the amount of released energy is tiny, and the particles dissipate very quickly. However, in the case of sudden—and especially violent—death, a great deal of particulate energy is released, and not all of it dissipates right away. Much of it, in fact, lingers, something like radioactive energy after a nuclear disaster, for days, weeks, sometimes even months.”

Nola took a sip from her water bottle. Her mouth was ridiculously dry. “Why does this happen? I have no idea. I’m not a pathologist. All I know is what I’m telling you right now: certain people have the ability to sense this energy—this
trace
, as it’s called. There’s nothing mystical about this; some people can taste minute quantities of certain chemicals in foods while everyone else cannot, or hear a much wider range of frequencies than most people, or have far greater depth perception. It’s much the same with tracists.”

A mid-ranking detective, sitting in an exaggerated slouch to show his disdain, interrupted her. “So let me get this straight. You can’t tell us anything about how the victim was murdered, who committed the murder, when it was committed, or why it was committed—just
where
.”

“Yes. That is correct. Just. Where.” She drawled the words out as if speaking to a very young child. She knew she came across as frosty and bitchy, which amused her.
And the Oscar goes to . . . me.
In truth, she was merely, massively, shy. She’d ducked into the ladies room before the briefing simply to stand still for a couple of minutes and try to control her shaking hands.

The detective maintained steady eye contact, leaving unsaid but clearly understood the question “Then what good are you, really?” Nola noted with disgust the way he sat with his legs splayed in that crudely territorial way some guys had. Out of the corners of her eyes she noticed that all the guys were sitting that way.

The detective looked as if he was about to say something snide again when the Detective Division Commander, Jack Dalton, interjected smoothly from the front row of chairs. “We need leads, Marshall,” he said to the slouchy detective. “We haven’t had any, until now. Ms. Lantri has pinpointed an old fishing shack”—he stood and pointed to the map behind Nola, indicating a bend in the river—“there. The location is marked on your copies.” Papers rustled, and eyes looked down and away from her, much to her relief. “Thanks, Nola,” Dalton said quietly and indicated with a nod and a smile that she could leave.

Despite her anxiety, she wanted to stay, wished she could have more to contribute, but knew that wasn’t possible. Dalton was taking a big enough risk just allowing her to work in this limited capacity. She supposed she should be grateful. She was. She just wished there could have been more to it.

This was her first case. Having gotten through it without throwing up, she reckoned she could chalk it up as a victory. Of course, tracist testimony wouldn’t hold up in court, but that wasn’t the point; the point was to find the missing person—in this case, Amy Siegel, who was only thirteen. The trace in the fishing shack had been so strong it made Nola’s head whirl. That had never happened to her before, and she made sure nobody knew it happened this time, as any sign of feminine weakness would probably undermine her already-shaky standing with the police.

“It happened here.” That was all she said. Then she walked away, seemingly oblivious to the stares that followed her. It surprised people who witnessed it, and perhaps disappointed some of the more skeptical ones—they were probably hoping to enjoy a good snicker at whatever touchy-feely incantations she moaned or whatever dreamy trance she fell into. They certainly expected more drama.

And in truth,
she
had expected more drama. Her part of the case had ended. She would not be there when the girl’s body, neck broken and flesh burned, was found two hundred yards from the fishing shack, nor would she have any part in finding the killer, a man with a frightening history of sociopathic behavior, distantly related to the girl’s family. Like everyone else in Redfort, New York, she would read about it online. Her name would not be mentioned. Of course, she didn’t want her name to be mentioned; she wasn’t interested in being famous, and certainly not in connection with such a grisly tragedy. She just wanted to do
more
. There wasn’t any more. Life went back to normal for those still living.

That all changed a year later when Culver Bryant went missing.

The assignment began like any other: someone had gone missing, foul play was suspected, few clues, clock ticking. She was summoned that sunny October afternoon to accompany the detectives as they talked to those closest to the missing person—in other words, those most likely to be involved in his disappearance. Most times, she was brought along merely to ascertain that foul play could be ruled out, that the missing person was alive and “missing” on purpose, in which case she would spend the day saying “no” over and over as they went from place to place. There were a lot of missing-persons reports filed in Redfort, and Nola knew the suicide rate was disturbingly high compared with the national average (as were unemployment and alcoholism, probably not coincidentally), but homicides were relatively rare. She didn’t necessarily relish the discovery of a violent death, yet as she made her way across town to the familiar generic grey building—she always thought it looked like it housed dentists or CPAs—she had to admit a tiny hope that this would not be another one of those monotonous “no” days.

A Slow Death (Max Drescher Book 1) by James Craig
Primal Threat by Earl Emerson
Cuentos de Canterbury by Geoffrey Chaucer
Calloustown by George Singleton
Ghost Girl by Thomson, Lesley
The Good Priest by Gillian Galbraith
Must Like Kids by Jackie Braun
The Eloquence of the Dead by Conor Brady
The Chamber of Five by Michael Harmon
The Magic Catcher by Cassie Clarke