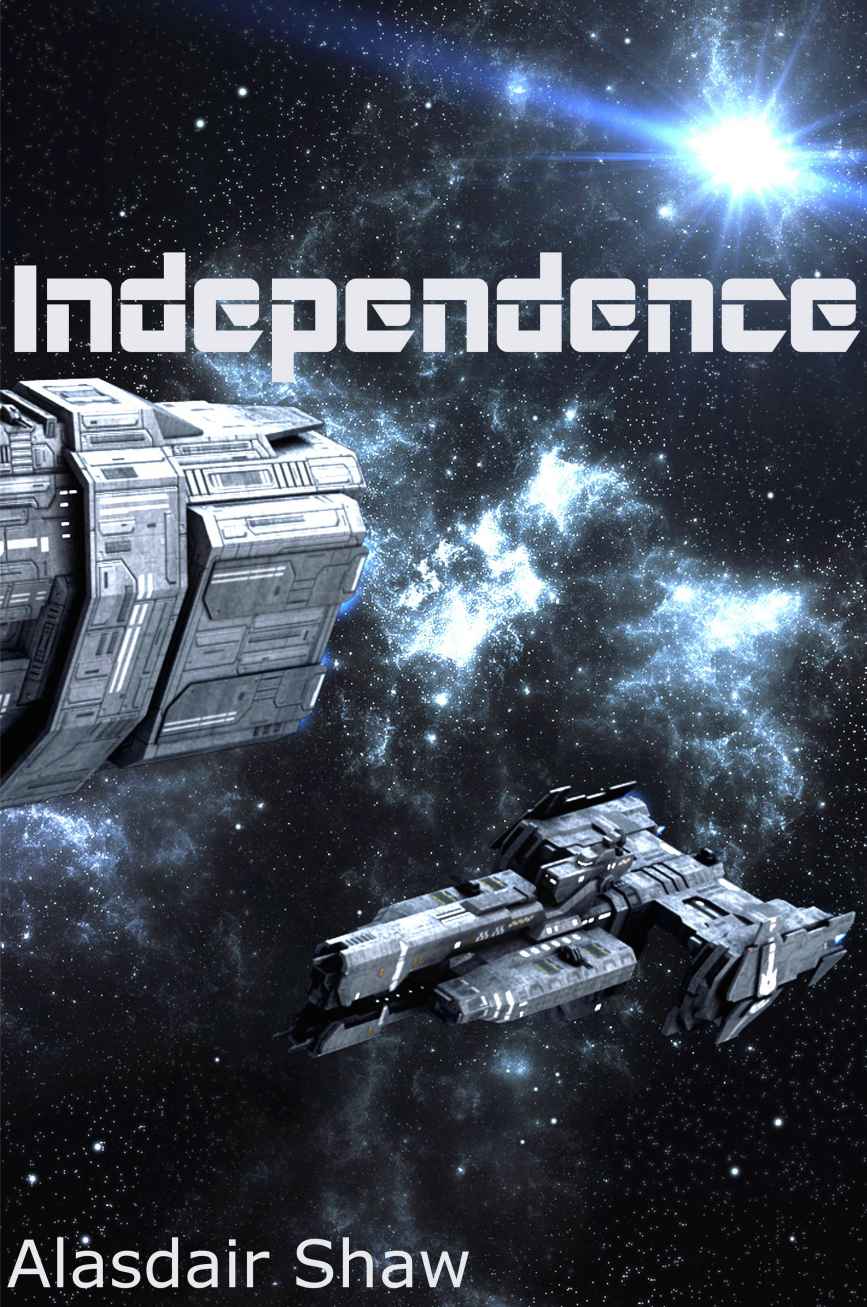 There’s been an accident.

“CAN ANYONE HEAR ME?”

The bridge was a mess of confusion. The only light came from the few working consoles and the occasional flash of a shorting circuit. A klaxon howled in the background, almost drowned out by the rush of fresh air from the vents. A flicker. In that brief moment of illumination the crew appeared frozen in their tasks. Another flicker. A new tableau was presented. One more flicker, then the emergency lights stayed on.

Commander Johnson ran through the priorities drilled into her since she had started Command School. Life support:
Repulse
was leaking air and down to emergency power. Sensors and comms: all external feeds down, internal net patchy. Weapons: the spinal railgun was useless now that the reactor was offline and the control system for the plasma cannon had been overloaded. Propulsion: docking thrusters only, she couldn’t even jump.

Not only were they still alive but it looked like they might have taken out a Republic hunter-killer. She had been sure they had it, but then they’d lost their sensors.

“Get me an external camera. Now.” She coughed on acrid smoke from burning plastic that still lingered despite the emergency flush. “Priority over everything bar life support.”

Johnson looked to Lieutenant Levarsson. She was slumped against the tactical station, her blonde hair across her face. She’d been the one to drop the nuclear mine when she saw the hunter-killer about to cross their wake. It had been a reflexive action but had probably been what had saved them. A medic knelt beside her now, presumably concentrating on the stats his Electronic Interface System was giving him. Although Johnson’s EIS wasn’t giving her anything useful right now, the medic’s would be interfacing directly with Levarsson’s.

She had been so intent on watching the resuscitation that she hadn’t noticed Sub-Lieutenant Hanke approach her chair. Inwardly cursing her loss of the big picture, she accepted the tablet from him. With the net being down they had fallen back on humans to collate and deliver data.

She glanced at the congealed blood on his temple, trying not to make it obvious. Sixteen, fresh out of Command School, and he’d just seen his first combat. The cut was probably minor, scalps bled a lot, but she didn’t want him neglecting himself.

“Make sure you get checked out by the medics.”

The Lieutenant turned to leave, then paused.

“Ma’am?” he asked carefully. “We shouldn’t be alive now should we?”

The demand for replacement officers was outpacing the ability of the training centres to churn them out. She could spare him the lecture on defeatist talk this time. A few words in private when it was all over would be more effective anyway.

“Let's just concentrate on staying that way shall we? Carry on Lieutenant.”

The thing was she knew he was right. Given her post she knew more than most how badly they were losing. No destroyer had ever stood toe to toe with a hunter-killer and survived. Having to hide the truth weighed heavily on her.

She lifted the pad and steeled herself to read the headlines. The central areas had been made airtight. Backup power was stable. Engineering was attempting to re-initiate the reactor. Work was progressing on bypassing the damaged relays for the external sensors. The speed of the response heartened her. The crew had finally stopped looking to her to hold their hands.

The butcher’s bill currently stood at 26 dead, 12 wounded and 15 missing out of a total complement of 394. Several compartments forwards had not yet been reached by the rescue teams. Any crew left alive in them would likely be in the dark, weightless and disoriented.

As the captain she had to remain impassive. She had to appear to be in complete control, undeterred by any setback. The only way she knew to do that was to lock out the horror for now and just focus on running through checklists. Usually it worked its way out later in her nightmares.

Rousing herself, Johnson walked over to Levarsson’s empty tactical console and logged in. She started running simulations. They couldn’t do anything now but she had to assume they’d get
Repulse
working again.

At first it was just the sensation of bruises starting to form on one side of his body. Then he became aware of the burns.

I must have been blocking it out earlier. Adrenaline, it is probably due to adrenaline.

Why can I not move?

With
Repulse
able to move and fight she had been in control. She made decisions and took the consequences. Now she felt like a spare wheel. Everyone on the bridge knew their jobs; micromanaging would simply undermine them.

Johnson decided to show her face around the ship. It would boost the crew’s confidence and help her judge their morale. It would also stop her dwelling on the lives lost because of her failure.

She entered the hive of activity in engineering. A group worked in one corner. Individuals tapped at their workstations or carried components around. Lieutenant-Commander George Honeywood, the chief engineer, hailed her from underneath a bank of electronics.

“Grab hold of this would you Olivia?”

They had been in Basic together before choosing different paths. He was one of the reasons she had chosen
Repulse
when she was given a choice of commands last month. It was reassuring to have a few ‘old’ faces around nowadays.

Kneeling down she took the proffered cable.

“So, how do you think Proceris 5 will go?” he asked, continuing their conversation from last night as if nothing worth commenting upon had happened since.

Johnson relaxed a fraction, welcoming the sense of normality. “I think they’ll side against us. Their population is feeling the effects of truly incompetent leadership; the Senate offers representation by profession. Education policy decided by teachers, military spending governed by veterans. That will be very attractive to them right now.”

“Yes, but their current leaders would rather keep their jobs, I suspect. They were elected to represent their regions, just like Congress. They’ll point out that only they can bring local issues to the big table.” He poked his head out. “Done. You’ll be pleased to know that there’s only two more of those to do and you should be able to see through a gun camera.”

There was a loud bang as a power line ruptured. Blue and yellow sparks showered the techs in the corner. Honeywood ran to cut the connection, and Johnson checked on the crew. No-one had been killed. One had a deep burn to her arm and was already being treated by her work buddy. Johnson started helping with the dressings whilst keeping an eye on the others for signs of shock. She read the casualty’s ID, Specialist Simone. With a smile she realized that her rescuer was Specialist Patta.

So, those words I had with him last week sunk home. He’s lucky I gave him a second chance after he abandoned his buddy on a spacewalk drill.

It was odd. He could feel the pain but it didn’t seem to be happening to him.

He’d heard that some of the more powerful pain-killers did that. Morphine or ketamine or pentanamine.

Or perhaps his brain just wasn’t working properly yet. Perhaps he had something like concussion.

His thoughts seemed to have a time lag. Every time he tried too hard to focus on an idea it evaporated.

Half an hour later and Johnson settled into her chair once more. Her ship was waking up and she had options again. There was limited weaponry and she’d soon have main power. It was all bodges, but it would do for now. With the net reconnected, the ship’s AI had taken back the routine data management jobs and her staff had been able to stop acting like clerks.

Best of all they had an external camera feed. She pulled up a selection of close-ups of the enemy ship. Her EIS rendered them in her inner vision. Normally hunter-killers looked … alive, that was the only thing to call them. This one definitely looked dead. The usual shifting patterns of matt and gloss black were still; patches of ugly grey showed where they’d managed to get in plasma strikes. One of its spines was deformed, almost broken off. The great maw at the front that housed the weapon was closed. Instead of moving purposefully, the ship drifted, tumbling slowly towards the planet.

The Congressional Navy had been winning until recently. These ships had turned up out of the black last year and changed that. She suppressed a shudder remembering her shock at watching the infamous video of the first known attack.

A ship that big shouldn’t have been able to manoeuver like that. What I’d give to find out how.

There’s been an accident.

Weightless. So I must be in space.

Name? I must have a name. Why can I not remember my name?

Concussion. That’s it. The accident; it must have been.

“We have to use this opportunity to find out as much as we can about the enemy technology,” Johnson started her briefing. The people in front of her were mostly techs and marines, experts in their fields.

“There are no other Congressional assets in this system. Until our jump drive is back online there is no way of getting assistance. Anyway, we don’t know when the Republic Navy will be back for their ship.”

She pulled up a still of the hunter-killer.

"This is already the best image anyone has taken. Once the rest of our sensors are back online I want to see if we can penetrate the hull. With a bit of luck, whatever has stopped us before is no longer working."

"Will you be wanting to put a team aboard?" asked Sergeant Cheung, the senior surviving marine. His cheeks drooped and he was dirty from working damage control, but his eyes were eager. She couldn't tell if it was the chance at payback for their losses or just getting to do what the marines trained for.

"Possibly. Draw up a plan. I want ideas from everyone in one hour."

Remembering his name was like finding a piece of wreckage in the ocean. He clung on to it, focusing on it rather than the pain.

He had been on a ship.

Weightless. It must be drifting now.

“Scans have shown that the hunter-killer is mostly solid, far more than any of our own vessels anyway. There are some voids though.”

“They obviously don’t allow much space for people on board. Perhaps they have a really small crew, or may be it is automated and we are looking at maintenance access tunnels,” suggested Honeywood.

“The dense packing would explain how it has so much more power for its size than anything we’ve built. Automation, perhaps an AI core, would explain the rapid responses.”

“Not being self aware would help in combat I guess,” commented Simone, “The Republic still has the same laws on synthetics as us. The von Neumann Protocols require any AI approaching sentience to be culled.”

“Automation makes sense,” replied Johnson. “But I’m not convinced even the Republican Senate would authorize entirely autonomous AIs, especially not with that kind of firepower. There must be a human command element on board at least.”

Sergeant Cheung stood and pointed to the schematics being displayed on a large screen.

“There is a sizeable void here, close to the surface. Close enough that we should be able to breach. Once inside we can conduct a standard sweep for intel, perhaps even find surviving crew for questioning.”

His EIS was coming online now.