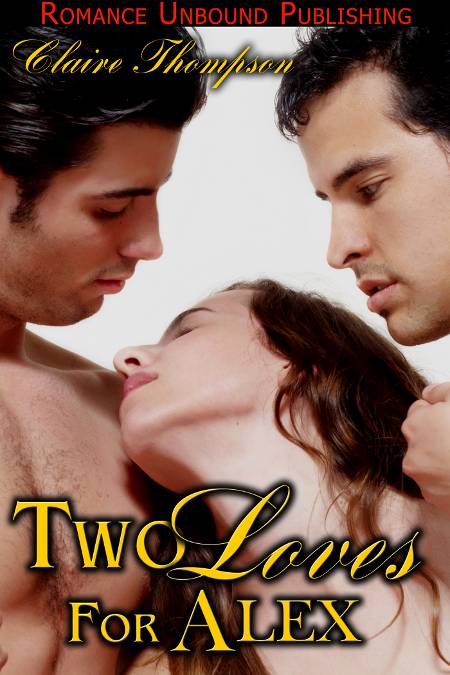 Two Loves for Alex  Claire Thompson What's love got to do with it?

That's what Alex asks herself when two seriously sexy guys invite her to remain with them after having undergone a week of intensive training as their sex slave. In this sequel to Two Masters for Alex, Alex is tested in ways she never dreamed, her erotic boundaries stretched to the breaking point. As her two Masters guide her in the exploration of sensual submission, Alex finds herself falling into the dangerous waters of love, all the while fearing that love might never be returned.Liam encourages Daniel to explore his dominant impulses with Alex, confident they can handle the sexy, sassy girl they have brought onboard to spice up their play. Neither man is prepared for the conflicting desires stirred up by the presence of the passionate young woman in their lives. Strong emotions surface when love and jealousy collide like freight trains, throwing all three into uncharted territory where heartbreaking decisions must be made.

Daniel was draped over the small stool they used for his daily marking, his forehead touching the floor, his arms stretched out on the carpet, his cock erect. The single-tail lash was balanced over his lower back. If he moved he would dislodge it, which would displease Liam. He loved their morning ritual, which Liam had instituted early on in their relationship to help Daniel start each day in a properly submissive state of mind.

Liam was in the bathroom shaving. The door was ajar and Daniel could hear the water running in the sink. He kept his eyes closed, focusing on his position, naked and waiting for his Master’s mark.

When Liam came into the bedroom, Daniel didn’t move. He’d learned to maintain whatever position he was in for long periods of time, though Liam rarely kept him waiting for very long.

His cock hardened as Liam came into the room. The whip was lifted from his back. “Who do you belong to, Daniel?”

Liam didn’t require Daniel to call him Sir. In fact, he usually just called him by his name. But when he was in a subservient position such as this, naked, ass offered up for the lash, the word Sir came unbidden to his lips.

A moment of searing pain—the leather tail catching him neatly across both cheeks. Daniel gasped, the only sign he’d been struck. Fire ran along the tortured flesh. He could feel the welt rising and along with it his cock.

Liam tapped his shoulder and Daniel rose, moving as gracefully as he could. Liam stepped back. He watched with glittering eyes as Daniel assumed his position for inspection, fingers laced behind his head, legs spread, chin up. Liam ran his finger along Daniel’s smooth jaw. He pressed his palms against Daniel’s chest and moved them down his body.

He gripped Daniel’s erect shaft in one hand, jerking it up while his other hand explored Daniel’s shaven pubic area and balls. Daniel bit his lip to remind himself to stay perfectly still instead of yielding to the aching desire to thrust himself against Liam’s strong fingers.

“Good,” Liam pronounced. Liam moved behind him and Daniel at once bent forward, grabbing his ankles with his hands.

Liam’s fingers moved lightly over the welt that still burned on Daniel’s ass. They gently probed his hole and moved along the cleft, which Daniel had made sure was smooth as a baby’s bottom, as smooth as the soft skin of the girl who had left them the morning before.

Alex—that blonde, adorable brat who required nearly constant correction—had fallen into their lives like an explosion. Though at first he’d questioned Liam’s wisdom in inviting her to stay for the week, now he had to admit he missed her very much.

But did she really have what it took to become a true, obedient submissive? Liam seemed certain. He was less so. At the same time, he couldn’t deny the thrill having her with them had added to their already satisfying lifestyle.

Though they both found women sexually attractive, neither had ever connected on such an intimate level with a female as they each had in so short a time with Alex.

It wasn’t love, but that wasn’t what they were seeking with her, nor she with them. The connection was strictly a D/s one. They had sought out a third partner to give Daniel a chance to explore his own dominant impulses while still submitting to Liam. The experience had been a heady one and a sometimes dangerous one with Daniel’s lack of control nearly resulting in a rift between him and the man he loved above all else.

He wouldn’t let that happen again. When Alex returned on Monday, Daniel would continue to train her and use her as a submissive but he would keep his heart intact for his Master.

He realized Liam was again standing in front of him. Liam pressed against his shoulder and Daniel let go of his ankles, dropping into a kneeling position.

Liam opened his jeans and pulled them, along with his underwear, down his thighs. His long, thick cock sprang forward. Daniel held himself rigid, resisting his urge to lick and suck the inviting shaft. Instead he opened his mouth and thrust his chin out, waiting for Liam’s cue.

Liam slid the head of his cock into Daniel’s open mouth. Daniel closed his lips around it, greedily licking the soft, spongy crown.

Daniel obeyed at once, letting his mouth go slack. Liam placed his hands on either side of Daniel’s head and moved forward, guiding his shaft until the head was lodged deep in Daniel’s throat.

He stayed that way for nearly thirty seconds, Daniel’s heartbeat keeping time, his mind slowly emptying. When Liam pulled back at last, Daniel took a huge gulp of air, preparing for the next thrust.

Instead, to his surprise, Liam stepped back and tapped Daniel’s shoulder. He stood at once, too well trained to question his Master, though he longed to bring him to orgasm.

Liam pulled his jeans and underwear up over his erection and took the naked Daniel into his arms. Daniel brought his own arms around Liam’s strong back and rested his head against his shoulder. He could feel Liam’s cock, jutting as hard as his own against him.

Alex slipped back into his mind. He could almost see her, kneeling beside them, watching them embrace with such palpable yearning it was at once amusing and somehow heartbreaking.

One never had to wonder what was on Alex’s mind. Her thoughts and motivations were as transparent as a child’s. She was a challenge to train but he had to admit he’d loved every minute of it.

“I miss her. What if she decides not to come back?” he blurted. He realized he hadn’t even used her name but of course Liam knew who he meant.

He stroked Daniel’s cheek, his voice gentle. “If she decides not to come back, then she wasn’t the one for us.”

“I think she’ll come back,” Liam added. “She just needed a day or two to collect her things and put her affairs in order. She’s probably as eager as we are to pick up where we left off. That’s why I didn’t come in your mouth just now. Neither of us is going to come until tomorrow night when I get home from work to find my two sex slaves, naked and kneeling at the front door.”

Alex hadn’t meant to steal the orgasm. It just kind of crept up on her. She’d stopped her packing to lie down for a few minutes, stripping off her sundress in an effort to catch what little breeze there was. The ceiling fan whirred mightily overhead but only succeeded in stirring up the warm, humid air of an unseasonably hot June for Connecticut.

When she closed her eyes, images of her two Masters had immediately flooded her imagination. Her hand had slipped almost without her knowledge into the lacy pink panties that were all she’d left on.

Liam Rutherford and Daniel Spencer were without question the most exciting men she’d ever come across. Just the thought of Daniel made her wet, with those blue-gray eyes against tan skin, his hair the color of wheat, sunlight and copper, kneeling naked and strong at the feet of his Master.

And tall, serious Liam, with the chiseled features and the thick hair she’d always wanted to run her fingers through but had never dared. When he fixed his deep gaze upon her, it was as if he stared directly into her soul, making her feel at once like a naughty five-year-old and the sexiest woman alive.

She hadn’t meant to orgasm but only to stroke away some of the fire in her sex. That fire had ignited the first time she’d laid eyes on the men only a week before and had been stoked to raging proportions by the time she left yesterday morning.

She had intended to stop before the sweet pull of climax dragged her over the edge.

She sighed, feeling regret to think she’d disobeyed them, even if they weren’t witness to it. Daniel and Liam had been very clear with her. If she was serious about being their submissive sex slave, it was essential she obey their rules at all times—not just when they were watching.

Before meeting Daniel and Liam, Alex had dabbled in D/s but had yet to meet the man who could claim her. Whenever her sensual envelope had been pushed just a little too far she’d been able to manipulate the situation to get her way, using her feminine wiles to get what she wanted, or thought she wanted. While she “won” in that sense, she ended up the loser because she never found the courage to truly submit.

With Liam and Daniel, because of their focus on each other, she had thought the situation would be ideal to finally and honestly explore her desire to submit without love getting in the way. She told herself this suited her. Better to keep things simple.

It hadn’t turned out to be as easy to keep her emotions under control as she’d envisioned. Though she had stoutly told herself she wasn’t looking for love, it had been hard to watch the two of them, so obviously in love with each other, while she was relegated to the sidelines once they were done playing with her.

Over the last few days of their week together she’d begun to admit her feelings were stronger than mere jealousy over being excluded. She was edging over that slippery slope of love, even knowing that love would not be returned by her Masters. She knew then, even if she never found a place in their hearts, she wanted to stay in their arms and at their feet as long as they would have her.

Then yesterday, Saturday morning, they’d stunned her with a gift that had taken her breath away. She looked down at the silver bracelets on her wrists—the same bracelets as Daniel wore on his. They were more than pretty jewelry, they were slave cuffs. Once snapped into place they couldn’t be removed save by a special key. Small but sturdy clasps dangled from each bracelet, used to quickly secure the wrists when necessary. By accepting them she’d agreed to become Liam and Daniel’s fulltime submissive.

“I guess I passed the audition,” she said shyly, enormously pleased with her new status as their permanent sub girl. They had laughingly agreed she had.

A Perfect Grave by Mofina, Rick
Threat by Elena Ash
Strong, Silent Type by James, Lorelei
Mob Boss Eleven- The Wrong One (The Mob Boss Series Book 11) by Mallory Monroe
Seduced 1 by P. A. Jones
Punkzilla by Adam Rapp
Saturday Requiem by Nicci French
On Solid Ground: Sequel to in Too Deep by Michelle Kemper Brownlow
A Bride Unveiled by Jillian Hunter
The White Cottage Mystery by Margery Allingham