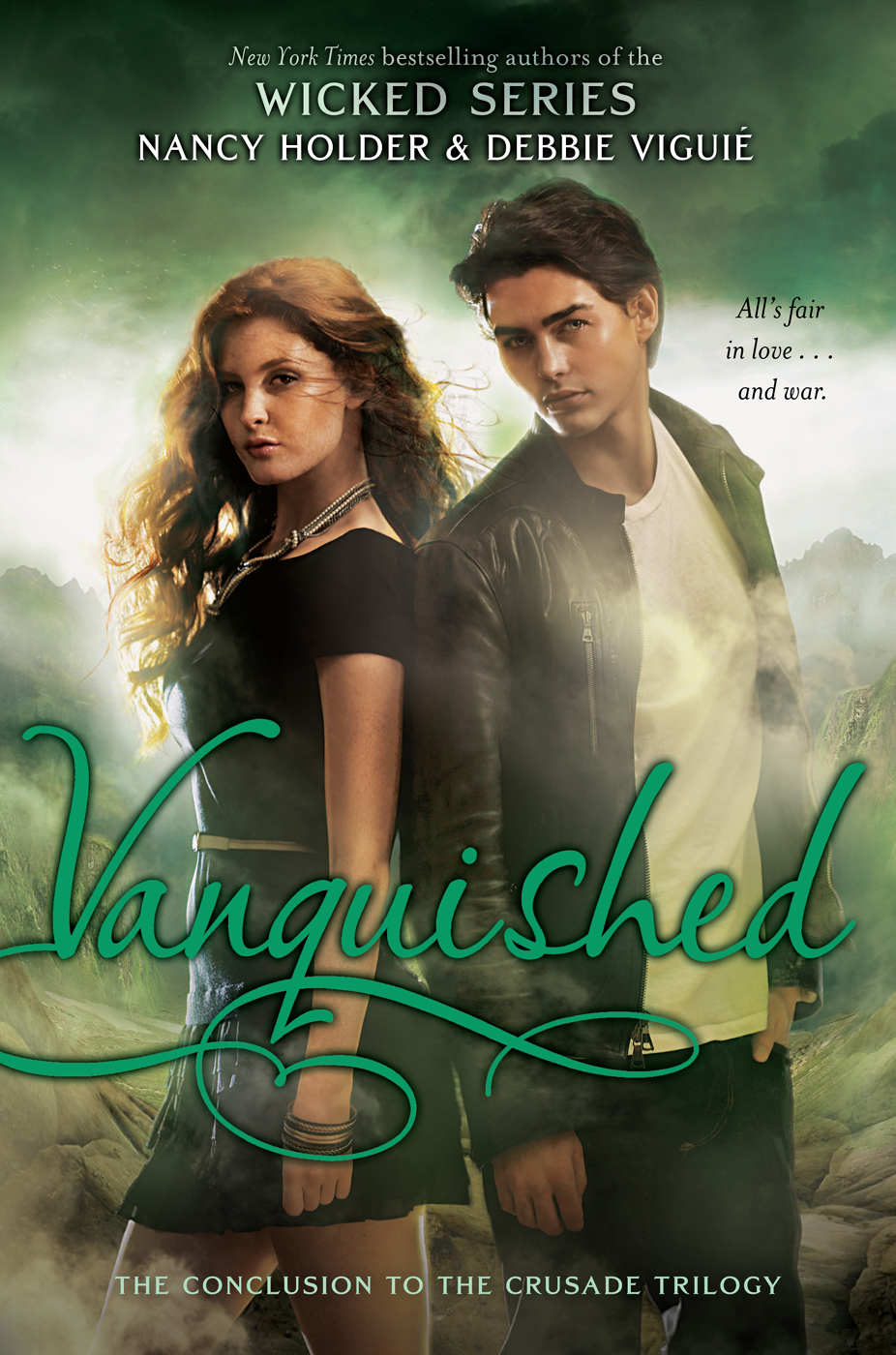 To all of the fans who
have joined in our Crusade
—D. V.

Thank you so much to my amazing, creative, wonderful coauthor, Debbie, especially for agreeing with me that we will celebrate the publication of
Vanquished
with a trip to Disneyland. Thank you, Howard Morhaim, for being the fantastic agent and dear friend that you are, and to Alice Speilburg and Kate McKean of Morhaim Literary for everything they do. Thank you as well to our UK agent, Caspian Dennis. Many, many thanks to our editor, Annette Pollert, for your sense of humor, skill, and talent. We’re definitely taking you with us to see the Mouse! My gratitude to everyone at Simon Pulse, especially our copyeditor, Karen Sherman. I’m grateful to my friends and family, especially my assistant, Erin Underwood; my daughter, Belle; and my sister, Leslie Ackel, for all that listening and helping and doing. Thanks to all our bloggers, reviewers, and webpals too.

With any book there are always so many people to be thanked. Thank you to my brilliant and talented coauthor, Nancy, or as I like to think of her, my sister-in-arms on this Crusade. Thank you to our magnificent agent, Howard Morhaim, and to Kate McKean and Caspian Dennis. Thank
you to Alice Speilburg for helping to keep me sane. Thank you to Annette Pollert for being a wonderful editor and engaging in some of the most hilarious e-mail conversations that have ever existed. Thank you to the fans who have given this series so much support and enthusiasm. Thank you to my husband, Scott, and my parents, Richard and Barbara Reynolds, for supporting me and encouraging me constantly. Thank you to Juliette Cutts and Anthony and all those who came out to see us while we were on tour. I have to also thank my friends, who are eternally patient and forgiving despite the fact that there are sometimes months when I don’t have the time to even say hi. So, Ann, Calliope, Teresa, Marissa, and Chrissy, thanks for everything!

The breeze blew from the turret
As I parted his locks;
With his gentle hand he wounded my neck
And caused all my senses to be suspended.

—St. John of the Cross,
sixteenth-century mystic of Salamanca

They say that it’s always darkest before the dawn. I know it’s a cliché that’s meant to give people courage when everything seems hopeless, but it’s actually true.

My team has spent our nights struggling against the Cursed Ones, counting the seconds until the sun would rise and deliver us from evil, terror, and death. Battling with our last ounces of strength, about to die but holding on for that flash of light as the sun begins to climb the horizon. But there’s something else that happens in those moments before daybreak, something far more terrifying than darkness:

Silence so terrible, so absolute, it’s as if the whole world is holding its breath. It makes you feel incredibly alone, even if there is someone standing beside you.

And right now, that silence is killing me.

Everything has fallen apart. My sister is missing. Is Heather alive, dead, alone, with other vampires? No one can say. Skye, our White Witch, was kidnapped by Estefan, her ex, during the last battle with Aurora. Our master, Father Juan, has cast the runes to try to find Heather and Skye, but they’ve given him no answers. They are silent—as silent as Eriko and all our other dead. We dug their graves in the rubble of our home, the University of Salamanca. We told them good-bye with prayers and tears . . . and their silence broke our hearts.

Even those of us who are here barely speak. Holgar is mourning the death of the werewolf he was once promised to. He had to kill her in the battle. Would I ever be able to do that? Jamie shuts himself away from the rest of us for hours. I know he’s working on two guns, one to kill werewolves and one to dust vampires. And our team has one of each. Sade is so traumatized by the massacre that she can barely speak.

Father Juan spends every waking moment on his knees in the chapel, praying in silence for us all. Noah passes the time cleaning weapons and working out.

There’s been no word from the outside world,
no way of knowing how my grandmother and mom are doing. There’s no whisper of the men with black crosses. No news about anything. Even “Kent,” the Voice of the Resistance, is silent here—we don’t have a radio, and we’re in Spain, which is probably too far away for him to broadcast, anyway.

His silence is the worst for me. When Aurora reawakened his bloodlust, he went on a killing spree back in Las Vegas. He was a monster. A butcher. Skye and Father Juan cast spells to reclaim his goodness, but they can’t be sure they worked. Antonio won’t even look at me. I know he’s afraid of hurting me, or killing me. I want to talk to him, tell him that I know he wouldn’t do that.

But maybe I would be lying.

So this cursed silence has fallen between us, and it’s worse than the silence around us.

And me? I know my place now. I understand what I have to do, but until Father Juan can point us in a direction, there is nothing to do but wait. In silence.

—from the diary of Jenn Leitner,
retrieved from the ruins

Skye York screamed at the top of her lungs, but she made no sound. Her blond dreadlocks were powdered with vampire ash and soot, and her black petticoats hung in tatters above her knee-high boots. Beneath her bustier, the gargoyle tattoo at the small of her back burned, pouring white-hot fire through her nerve endings. She was nearing her breaking point.

Estefan had been torturing her for what seemed like years, but it couldn’t have been that long. She hadn’t had anything to eat or drink since he had kidnapped her, and though she was dehydrated, she hadn’t died of thirst. Still, though the pain was unbearable, her tears had all dried up.

He had dragged her back into the Hell Fire Caves, chambers of flint and chalk beneath the Dashwood family seat. Sir Francis Dashwood was said to have reigned over the notorious Hell Fire Club in the 1750s, when powerful Dark Witches had conducted unspeakable rituals. The caves remained a trendy partying spot for witches who flirted with the darker side of magick. Skye and Estefan had partied there almost three years ago—before she had known he was a liar and a killer. Now he had her chained to a rock wall in the same spot where he had kissed her one night and asked her if she would move back to Spain with him.

It was ironic, then, that he had dragged her from Spain back to England. Why had he bothered to bring her all the way here from Salamanca? Where was Aurora, the evil vampire he worked for? Had Aurora been staked in the last battle? What about Skye’s friends, her teammates? Were they alive or dead? She had tried asking Estefan, but he had just laughed. The worst part was, she wasn’t sure he even knew.

He only seemed interested in tormenting her. He rippled shocks of magicks over her skin, burning her without leaving a mark, making her muscles quiver and contract until she shook.

Why doesn’t he just kill me?

“Because I love you,” Estefan said, stepping from the shadows. There were dark splotches on his tight jeans and black silk shirt. Her blood.

The Spaniard, with his charming accent and macho swagger, had easily enticed an innocent fourteen-year-old Skye. His attributes, which had once seemed dark and mysterious, were just brutal and sadistic now.

Skye wished she had never met him, but then she would never have fled him to Salamanca and the Spanish training school where she had learned to fight vampires. She would never have met her friends or her fighting partner, Holgar.

Holgar. Thoughts of him kept her going. Kind and generous, he was also the strongest person she knew. Now, as her knees buckled and she hung from the iron manacles
around her wrists, she let herself fantasize about what he’d do to Estefan when he found her.

“Your friends aren’t going to find us,” Estefan said.

He had been wandering freely through her mind, torturing it even more cruelly than her body, inserting himself into her thoughts, obscuring her memories, conjuring new ones.

At least, she prayed to the Goddess that these memories weren’t real. She wouldn’t be able to live with herself. She saw herself here, in this cave, performing Black magick, drinking blood, pledging her loyalty to the Cursed Ones. She knew that Estefan had done all those things. But what had she done? She had been under his spell when she’d gotten the gargoyle tattoo on the small of her back. She actually remembered it, but the memory was detached, as if she were watching herself from a distance.

I’m seeing it through Estefan’s eyes,
she realized.

“That’s right,” he chuckled. “You were drunk when you got that tattoo. You told me that love is forever, and you swore to love me always.”

Her girlish crush on him hadn’t come close to touching such a sacred emotion. What was it Father Juan had said in one of his sermons?
Perfect love casts out fear.
What they’d felt for each other certainly hadn’t been love. Looking into Estefan’s cold, glittering eyes, she realized he was incapable of understanding, let alone living, that truth.

She squeezed her eyes shut, but she still saw his face in her mind. He laughed at her. He touched her cheek, and
she turned her head to bite him, but her teeth just snapped together painfully.

He had been drugging her—she knew that—to keep her from spell casting. Her energy was too depleted to use magick to escape. But the drugs were wearing off. Hope surged through her, and she tried to test the chain around her wrist. She couldn’t move.

Horror swept over her as she realized that Estefan had changed his game—he had paralyzed her. And it wasn’t only her body that he had in an iron grip. He flashed impressions of everything that had terrified her since she was a little girl. In her mind he showed her images of them kissing, whispering romantic promises to each other, which filled her with shame. Well, two could play at that game.

Skye pictured Holgar. Funny Holgar, howling uncontrollably during the ambush back in Russia and looking so shocked at himself, and then laughing hysterically about it. She loved his sense of humor. More than once it had made the misery of a situation bearable for everyone. Sweet Holgar, who offered his shoulder as a pillow when they were sleeping on the snow-covered ground in the forest. Strong Holgar, carrying her on his back even though he was injured, then protecting her seconds later by ripping out the throats of attacking vampires and werewolves.