Read Vienna, 1814: How the Conquerors of Napoleon Made Love, War, and Peace at the Congress of Vienna Online

Vienna, 1814: How the Conquerors of Napoleon Made Love, War, and Peace at the Congress of Vienna 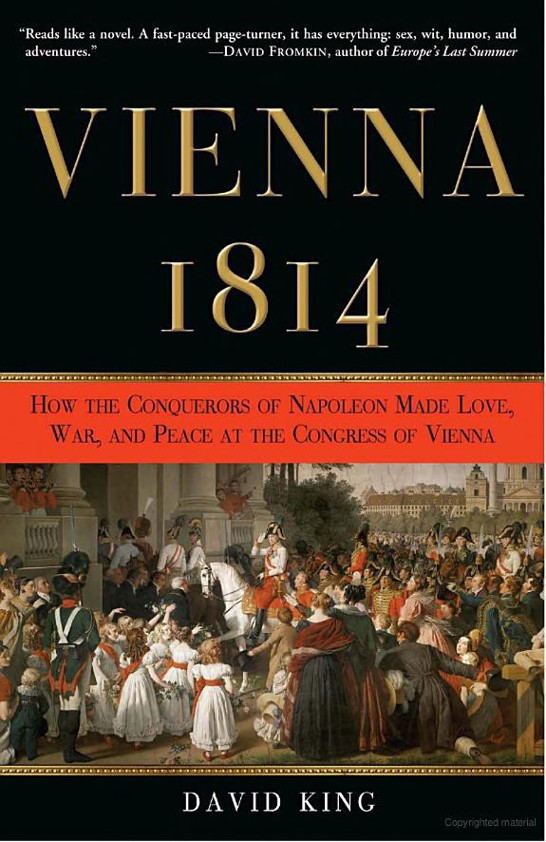 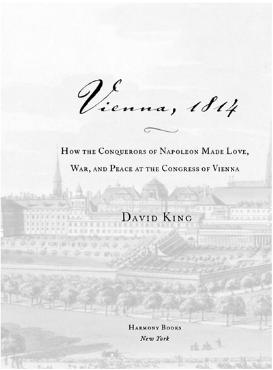 1 B
READ AND
C
IRCUSES

Y
ou have come at the right moment.
If you like fêtes and balls you will have enough of them; the Congress does not move forward, it dances.

T
he tall, sleek frigate HMS
Undaunted
slowly made its way toward the tiny fishing harbor. Two dozen exhausted rowers helped steer the graceful vessel to the hastily constructed wooden quay. Assembled crowds cheered themselves hoarse, and bouquets of flowers floated on the water to welcome the strangers. For on board was the new emperor of Elba, absolute sovereign of every bit of the sixteen-mile-long island.

Everyone was curious, straining to catch a glimpse of the short man in the old green coat, white breeches, and bright red top boots. He was instantly known by his walk, head down, body somewhat stooped forward, hands clasped behind his back, frantically pacing like some “wild animal in a cage.” Flakes of snuff frequently dangled from his lips, completing the ruffled, disheveled impression.

Only two weeks before, he had attempted suicide, downing a poisonous concoction of opium, belladonna, and white hellebore carried in a heart-shaped vial worn around his neck. The dose was certainly enough to be fatal, but its strength had been sapped during the brutal Russian winter. Now all the bitter memories of that disastrous time seemed worlds away. Certainly, the island at the other end of his spyglass was no Corsica. But the emperor was resigned to his fate, imagining what lay ahead on his sunny yet confined new home.

For Napoleon Bonaparte, that brilliant maniac, had been stopped after conquering most of the continent. Territory after territory had succumbed with astonishing rapidity to the bold “man of destiny.” The French tricolor had been raised everywhere from Madrid to Moscow; proud members of the Bonaparte clan had been placed on thrones all over the sprawling empire. By 1814, however, overextension, exhaustion, and too many military fiascoes had sent the monstrous edifice crashing down. Napoleon had been defeated, his empire shattered, and the entire web of international relations thrown into utter disarray. It was time to rebuild.

Kings, queens, princes, and diplomats would all pour into the city of Vienna in the autumn of 1814 for the highly anticipated peace conference. More than 200 states and princely houses would send delegates to settle the many unresolved issues. How were the victors to reconstruct the war-torn continent? How were they going to make restitution to the millions who had lost family members or suffered the horrors of Napoleonic domination? The Vienna Congress offered a chance to correct the wrongs of the past and, many hoped, create the “best of all possible worlds.”

Reasoned opinion predicted that all negotiations would be wrapped up in three or four weeks. Even the most seasoned diplomats expected no more than six. But the delegates, thrilled by the prospects of a lasting peace, indulged in unrestrained celebrations. The Vienna peace conference soon degenerated into a glittering vanity fair: masked balls, medieval-style jousts, and grand formal banquets—a “sparkling chaos” that would light up the banks of the Danube.

Indeed, while the peacemakers enjoyed themselves, hopes for a timely resolution were quickly fading. Secret intrigues, personal animosities, bitter hatreds, and a host of other unexpected obstacles would prevent the dazzling entourage from agreeing on just about anything. Waging peace, the delegates learned, would be as difficult as defeating Napoleon.

Suddenly, six months into the “happy, unfettered confusion,” a courier reached Vienna with a letter marked
URGENT
. It was slightly past 6 a.m., and the Austrian foreign minister, Prince Klemens von Metternich, was too tired to be bothered with yet another matter claiming immediate attention. He put the letter on his nightstand and went back to bed. An hour and a half later, he opened the dispatch, sent from an imperial and royal consulate general in Genoa (actually, it was Livorno). It read in full:

The English commissioner Campbell has just entered the harbor to inquire whether anyone has seen Napoleon at [Livorno], in light of the fact that he has disappeared from the island of Elba. The answer being in the negative, the English frigate put to sea again without delay.

To his horror, the truth dawned on the dazed insomniac. Napoleon Bonaparte had escaped and no one had any idea where he was headed. The Austrian minister scrambled out of bed, dressed “in a flash,” and broke the news to the congress. By the time the curtain fell at the Redoutensaal theater that evening, the hunt was on for the “most feared warlord since Genghis Khan.”

T
HE
C
ONGRESS OF
Vienna was indeed quite unlike any other peace conference in history. It was to be the first large peacemaking venture in almost 175 years, and it has been controversial ever since. In addition to the many issues and tensions, one of its most fascinating features is the explosive mix of delegates sent to the decadent Habsburg capital.

Representing the Austrian hosts was the elegant, sophisticated, and vain Prince Metternich, a “Don Juan” who excelled in the arts of seduction. With Napoleon’s defeat and exile, France sent a diplomat every bit as polished and devious: Prince Charles-Maurice de Talleyrand-Périgord. Almost all the scandalous accusations about him were true, Madame de la Tour du Pin acknowledged, but Talleyrand was still the most enchanting man she had ever known. His powdered wig, velvet coat, and red heels made him look like the last survivor of the ancien régime. “Shit in silk stockings” was Napoleon’s verdict.

The most volatile and hot-tempered of the delegations, however, was undoubtedly Prussia, the north German state that was, at this time, too strong to be a minor power, and yet not quite strong enough to be a great one. Their king, Frederick William III, came in person, bringing one of the largest, most educated, and hardworking delegations to town. The Prussians demanded compensation after their country had been unceremoniously carved up at the whims of the French invaders.