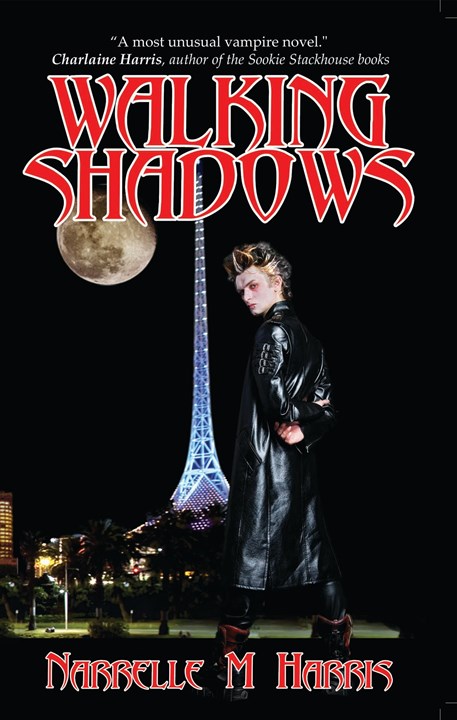 Lissa Wilson's life hasn't been quite the same since people she cared about started
getting themselves killed.

And Lissa learnt that the opposite of life is not always death. On the plus side,
she made a new friend.

Gary Hooper may be the worst best-friend a librarian could have - and easily the
worst vampire ever
- but he has taught Lissa the real meaning of life.

Gary's worldview has also improved remarkably since meeting Lissa, but all that
could be lost if she discovers what services he provides Melbourne's undead community.

Meanwhile, as their friendship brings him closer to the humanity he lost, it also
puts them both in grave danger.

And there's a big chance that the evil stalking them could them both killed - in
his case, for good this time.

For Nanna and Poppa Harris

I still miss you.

Praise for
The Opposite of Life

Book 1 in the GeekVamp series:

"It's certainly a most unusual vampire novel. Lissa Wilson, librarian, geek,
and young woman about town… seems to be the magnet for trouble...She's a wonderful character;
not because she's an heroic supergirl, but because she rings true. If you can get this book, do.
It's really a refreshing take on a common theme."

"A well-made plot with a killer (literally) ending."

If you're a sucker for a good vamp story,
The Opposite of Life
is about
life and death, and love and revenge, and loss and grief, and solving brutal murders. Oh, and
dating."

A blunt observation, but certainly the most pertinent one.

"You've brought me a severed hand. In a bag." I thought it bore repeating, given Gary's
lack of response.

"Yeah. Sorry, Lissa" said my undead friend. "I meant to tell you before you opened
it, but you were a bit quick off the mark."

"You've brought me a
hand
in a
bag
." I jabbed my finger in a tiny, tense
gesture at the bright yellow plastic bag on the counter, hoping none of my colleagues would notice.

"I didn't have anywhere else to keep it."

"So you brought it
to
my library?
"

"There might be a time and a place for severed human hands in plastic bags, Gary, but that
is never, ever,
ever
in
my
library."

"There's a DVD in there as well," Gary pointed out.

"Yes. Yes, I saw that." I kept my voice calm. When he'd placed the bag with its
distinctive logo on the counter, I pounced, assuming he was showing off the latest addition to his
film collection of trashy vampire flicks. And that's a zero score for Lissa Wilson.

"I had the DVD first," he continued, "I mean, I didn't go shopping
after
I
found it."

Because that would, you know, be
crazy
. Unlike bringing the thing to me at work.

"It wouldn't fit in my pocket," Gary continued, as though he'd actually tried to. He
can't help it, I suppose, being equal parts socially-awkward nerd and socially-awkward vampire. I'm
mainly socially-awkward librarian, which is one reason why we get along. When he's not bringing me
hideous and inappropriate gifts.
Like a severed hand.

I was clearly having a lot of trouble letting that go.

"I can't talk now," I said tightly.
Not while a severed hand in a shopping bag is
sitting on my library counter.

My boss Beatrice noticed us at last. Gary was dressed as usual in an eye-wateringly colourful
shirt, so it was inevitable. She eyed us with concern. I was probably almost as pale as Gary.
"You okay?" she called out from her end of the counter.

"I'm fine," I called back. "My friend is playing a practical joke."

"It's not a giant rubber spider in there, is it?"

"You shouldn't do that to arachnophobes," Beatrice said to Gary in a tone that
suggested she thought it was a good gag. He nodded solemnly.

"Sorry, Lissa" he said earnestly, "I didn't mean to shock you like that."

"How did you think I'd react? No, wait," I took a deep breath. "Can you give me
five minutes? I need to finish up." And rediscover my equilibrium.

"I guess. It's not going anywhere," Gary said with a grimace.

He stood aside to let me cater to the library patrons who were queued up behind him. I tried to
quell my shaking hands so I could scan books, and kept dropping either the books or the scanner
instead. Gary loitered by the desk, edgy and impatient. Beatrice gave me a questioning look and I
tried - in vain - to look unconcerned.

The minute we were done I grabbed my satchel from the staff room, collected Gary by the elbow and
drew him outside, leaving the boss to lock up.

Out in the warm evening air, I took several more calming breaths. And then, because I couldn't
believe what I'd seen, and I am a glutton for stupid, I tapped Gary's knuckles for him to open the
bag again. He obliged.

A bloodless hand lay in the bottom of the yellow bag, next to the shrink-wrapped DVD. The bright
summer sunlight filtering through the plastic made the hand look even sicklier than I remembered.

There was no mistaking it for a rubber prop. The hand's reality was in the texture of the pale
skin; the detailed criss-crossed lines of the palm; the gentle curl of the elegant fingers; the fine
hairs along the back of the hand; faintly dirty fingernails, as though the grime was old and
permanent; the dried-raw-meat texture of the stump; and the ivory of the bones protruding from the
truncated wrist, angled as though the hand had been not cut but
twisted
off.

Another factor in the not-a-fake analysis was Gary. His sense of humour doesn't run to macabre
practical jokes. That's the forte of the rest of Melbourne's ghastly undead community. Mercifully,
at this point, he closed the bag. What a pity the image was now burned into my brain.

I struggled for something useful to say. "Whose is it?" I managed at last.

That was repulsively more information than I required. Mundy was Melbourne's oldest vampire, a
vicious bastard with the musty air of the 17
th
century still clinging to his speech
patterns.

I sought more mundane details, if that's what they could be called. "How did you end up with
it?"

"Mundy wrote and asked me to visit him."

I noted the 'wrote' - neither Gary nor Mundy had a phone.

Beatrice had stepped outside. We waited while she locked the library. A car pulled up and
Beatrice's wife, Jean (otherwise known as Mrs Beatrice) leaned across the seat to open the
passenger-side door. They kissed, a little spousal peck, and they both waved in that partly-bashful,
partly-smug manner of the newly wed. I waved back.

Their utter adorability had a galvanising effect on my courage. The fact that I had to know about
vampires was bad enough. I was going to keep Beatrice, Jean and everyone else I knew as far from all
that undead malarkey as I could manage.

After they had driven out of sight I turned to Gary. "Right. So then what?"

"What was he doing there?" Mundy was up to no good, obviously, no matter where he was.
Mundy was always either up to no good or contemplating no-goodness to get up to.

"Nothing. That's where he lives now."

"What happened to his squat in Casselden Place?" I couldn't imagine the old terror
moving unless he had to. He had seemed right at home lurking in the gloom of the heritage-listed but
otherwise neglected cottage in the city's back alleys.

"What's that expression you use? Gentrified all to buggery. That part of the city has been
renovated as offices and lunch bars, and the Heritage Council restored the cottage. There's a plaque
there now, all about its historical significance."

And there lies the trouble with the 21
st
century in a nutshell, for the likes of
Mundy. Gentrification uses up all the best abandoned real estate in Melbourne, eventually. Pretty
soon it's all smart, cutting-edge new media companies and bright young things seeking out the latest
avant-garde
venues. Vampiric skulking isn't half so effective when you have to weave among
the 24-hour suits and hipsters.

"You went to Coburg," I prompted.

"Yeah. He's living in an abandoned funeral home there."

"Seriously?" Mundy had a morbid sense of humour, but even this seemed clichéd
for him.

"It's got most of a roof still, and it sort of looks like one of those Spanish houses. A
hacienda." Gary said, as though that explained everything. Which maybe it did. Obviously, Mundy
would prefer a home with a modicum of class, or at least of furniture, but any place would do in a
pinch.

Vampires turned out to be very bad at making or keeping money in the long term and few of them
had skills that translated to the modern economy. Refusing to pay rent was one thing, but these days
you couldn't just keep eating the bailiffs. Someone was bound to notice. Gary was lucky he had
inherited his own home, and some canny investments, from his parents after they died.

"Anyway," Gary returned to the story, "When I got there, Mundy didn't answer the
door, so I climbed in through the hole in the roof. The place was a mess. The furniture was smashed
to pieces. A couple of the walls had caved in, and the floor, in places." Gary sounded awed by
the level of destruction he'd seen. "Then I saw the hand. I picked it up in case I could find
Mundy in time for him to stick it back on."

A new and freakish idea - one I couldn't bring myself to explore. "Are you sure it's
his?" I asked faintly.

"Pretty sure," said Gary, "I took it to Magdalene's. No-one was there either. The
club's not open yet." He shrugged helplessly. "So I came to see you."

He looked at me like I'd have the answers. Me and my amazing living brain, so much better at
thinking than the undead variety, which struggled to learn new skills, let alone come up with new
ideas. Only I couldn't think what to do either, except to keep breathing without hyperventilating.
That was taking up a lot of my thought processes just then.

Right. Short term: keep the damned hand on ice in this summer heat. Memories of dozens of medical
shows about reattaching limbs after industrial accidents made that a good start, even if I didn't
know exactly how it applied to the undead. Next, get it to the club the instant the door opened and
let Magdalene keep it in her own fridge until Mundy showed up.

As horrors go, this wasn't as bad as some I'd experienced, but the awfulness was rendered more
distressing by the thoroughly pleasant and satisfying day that had preceded it.

The day had been great, actually. I'd helped a lot of people find the books they were after and
introduced some teenagers to the works of Gaiman, Bujold and Willis. And Mrs Pendleton, 83 years old
and deeply cool, had completed her first blog post with my nominal assistance.

I'd spent a blissful afternoon cataloguing a box of new books, including a book of Gothic art
inspired by the legend of Dracula. I'd amused myself for a moment by considering whether to file it
under Life Sciences or somewhere in Anthropology. Or, given that most vampires I know have a foul
sense of humour and a penchant for biting people, a slot of their own in Social Problems in the 360
range.

Lost Time by Ilsa J. Bick
The Target by David Baldacci
Clochemerle by Gabriel Chevallier
El monstruo subatómico by Isaac Asimov
The Axeman of Storyville by Heath Lowrance
The Last Days of Disco by David F. Ross
The Falconer's Tale by Gordon Kent
The Body In The Big Apple by Katherine Hall Page
Left Together by D.J. Pierson
One Hand Jerking by Paul Krassner