What is Life?:How chemistry becomes biology 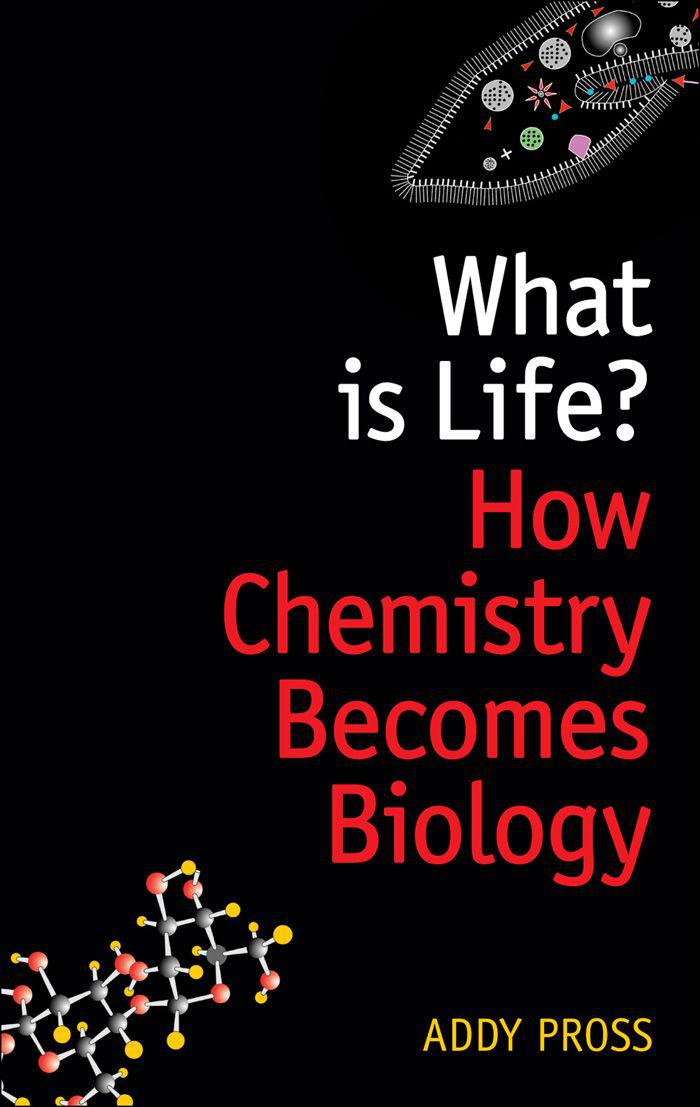 “By formulating a new stability kind in nature, Addy Pross has uncovered the chemical roots of Darwinian theory, thereby opening a novel route connecting biology to chemistry and physics. That connection suggests that abiogenesis and biological evolution are one process, throwing exciting new light on the origin of life and offering a striking chemical explanation for life’s unusual characteristics. This book is more than worth reading—it stirs the readers’ mind and paves the way toward the birth of further outstanding ideas.”

Ada Yonath,
joint winner of the Nobel Prize for Chemistry,
2009

The moral rights of the author have been asserted

All rights reserved. No part of this publication may be reproduced, stored in
a retrieval system, or transmitted, in any form or by any means, without the
prior permission in writing of Oxford University Press, or as expressly permitted
by law, by licence or under terms agreed with the appropriate reprographics
rights organization. Enquiries concerning reproduction outside the scope of the
above should be sent to the Rights Department, Oxford University Press, at the
address above

To Nella, Guy, and Tamar, for what my life is

1. Living Things are so Very Strange

2. The Quest for a Theory of Life

5. The Knotty Origin of Life Problem

‘I spent the afternoon musing on Life. If you come to think of it, what a queer thing Life is! So unlike anything else, don’t you know, if you see what I mean.’

The subject of this book addresses basic questions that have transfixed and tormented humankind for millennia, ever since we sought to better understand our place in the universe—the nature of living things and their relationship to the non-living. The importance of finding a definitive answer to these questions cannot be overstated—it would reveal to us not just who and what we are, but would impact on our understanding of the universe as a whole. Has the universe been fine-tuned to support life, as implied by proponents of the so-called anthropic principle? Or, to take a more Copernican view of man’s place in the universe, ‘is the human race just a chemical scum on a moderate-sized planet’, as argued by Stephen Hawking, the noted physicist? A wider conceptual gulf would be hard to conceive.

Some 65 years ago another renowned physicist, Erwin Schrödinger, wrote a book whose catchy title
What is Life?
directly addressed the issue. In the opening lines of that book Schrödinger wrote:

Sixty-five years have passed but despite the enormous advances in molecular biology in those years, illuminated by a long list of Nobel prizes, we continue to struggle with Schrödinger’s simple and direct question. And a struggle it is. Carl Woese, one of the leading biologists of the twentieth century, has recently gone as far as to claim that the state of present-day biology is reminiscent of that of physics at the turn of the twentieth century, before Albert Einstein, Niels Bohr, Erwin Schrödinger, and the other great twentieth-century physicists totally revolutionized the subject; that the time for biology’s revolution has finally come. Strong sentiments indeed! What is no less remarkable is that modern biology appears to be happily meandering along its current mechanistic path with most of its practitioners indifferent, if not oblivious, to the shrill cry for reassessment.

Yes, it is true that in this modern era we know unequivocally that there is no
élan vital,
that living things are made up of the same ‘dead’ molecules as non-living ones, but somehow the manner in which those molecules interact in a holistic ensemble results in something very special—us, and every other living thing on this planet. So, paradoxically, despite the profound advances in molecular biology over the past half-century, we still do not understand what life is, how it relates to the inanimate world, and how it emerged. True, over the past half-century considerable effort has been directed into attempts to resolve these fundamental issues, but the gates to the Promised Land seem as distant as ever. Like a mirage in the desert, just as the palm trees signalling the oasis seemingly materialize,
shimmering on the horizon, they fade away yet again, leaving our thirst to understand unquenched, our drive to comprehend unsatisfied.

So what is the basis of this deeply troubling and persistent dilemma? To clarify in simplest terms where the problem lies, consider the following hypothetical tale: you are walking through a field and you suddenly come across a refrigerator—a fully functional refrigerator in a field with some bottles of beer inside, all nicely chilled. But how could a refrigerator be working in the middle of a field, apparently unconnected to any external energy source, yet maintaining a cold interior? And just what is it doing there, and how did it get there? You take a closer look and you see a solar panel on its top, which is connected to a battery, which in turn operates the compressor that all fridges have in order to function. So the mystery of
how
the refrigerator works is resolved. The refrigerator captures solar energy through the photovoltaic panel, so it is the sun that is the source of energy that operates the refrigerator and enables it to pump heat from cold to hot—in the opposite direction to the one that normally governs heat flow. Thus, despite Nature’s drive to equalize the temperature inside and outside the cabinet, in this physical entity that we call a ‘refrigerator’, there exists a functional design that enables us to keep our food and drinks at a suitably low temperature.

But the mystery of how it got there in the middle of the field remains. Who put it there? And why? Now if I told you that no one put the refrigerator there—that it came about spontaneously through natural forces, you would react in total disbelief. How absurd! Impossible! Nature just doesn’t operate like that! Nature doesn’t spontaneously make highly organized far-from-equilibrium,
purposeful entities—fridges, cars, computers, etc. Such objects are the products of human design—purposeful and deliberate. Nature, if anything, pushes systems
toward
equilibrium, toward disorder and chaos,
not
toward order and function. Or does it?

The simple truth is that the most basic living system, a bacterial cell, is a highly organized far-from-equilibrium functional system, which in a thermodynamic sense mimics the operation of a refrigerator, but is orders of magnitude more complex! The refrigerator involves the cooperative interaction of, at most, several dozen components, whereas a bacterial cell involves the interaction of thousands of different molecules and molecular aggregates, some of enormous complexity in themselves, all within a network of thousands of synchronized chemical reactions. In the case of the fridge, the function is obvious—to keep the beer or whatever else is in the cabinet cold by pumping heat from the cold interior to the hotter exterior. But what is the function of the bacterial cell with its organized complexity? Its function can be readily recognized simply by observing its action. Just as the function and workings of the refrigerator can be uncovered by inspecting its operation, so the cell’s function—its purpose if you like—can be revealed by seeing what it does. And what do we see? Every living cell is effectively a highly organized factory, which, like any man-made factory, is connected to an energy source and power generator that facilitates its operation. If the energy source is cut off the factory ceases to operate. This miniature factory takes in raw material, and through the utilization of power from the factory’s power generator, converts those raw materials into the many functional components, which will then be assembled to produce the factory’s output. And what is that output? What does this highly elaborate
nano-factory produce? More cells! Every cell is ultimately a highly organized and efficient factory for making more cells! The Nobel biologist Francois Jacob expressed it rather poetically: ‘the dream of every cell, to become two cells’.

And here precisely lies the life problem. Just as the likelihood of a functional fridge—cabinet, energy collector, battery, compressor, gas—spontaneously coming together naturally seems inconceivable, even if its parts were all readily available, the likelihood for the spontaneous formation of a highly organized far-from-equilibrium miniature chemical factory—a nano-factory—also seems inconceivable. It is not just common sense that tells us that highly organized entities don’t just spontaneously come about. Certain basic laws of physics preach the same sermon—systems tend toward chaos and disorder, not toward order and function. No wonder several of the great physicists of the twentieth century, amongst them Eugene Wigner, Niels Bohr, and Erwin Schrödinger, found the issue highly troublesome. Biology and physics seem contradictory, quite incompatible. No wonder the proponents of Intelligent Design manage to peddle their wares with such success!