Read When a Champion Wants You Online

When a Champion Wants You 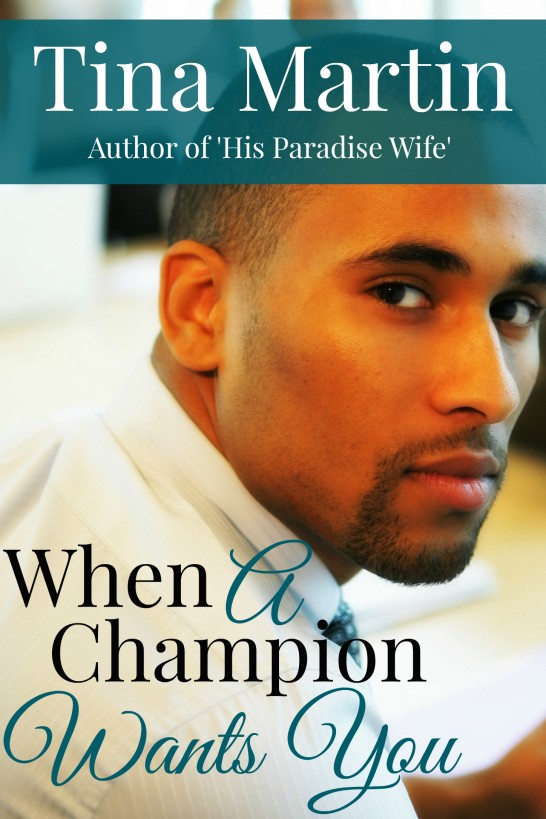 When A Champion Wants
You

WHEN A CHAMPION WANTS
YOU

All rights
reserved.
No part of this book may be
reproduced in any form or by any electronic or mechanical means,
including information storage and retrieval systems, photocopying
and recording, without prior written consent of the
author.

This is a work of fiction.
Names, characters, places, businesses and products are used
fictitiously. Any similarity to actual events is entirely
coincidental.

Other books by Tina
Martin:

His Paradise Wife (The
Champion Brothers)

Dying To Love
Her

Dying To Love Her
2

Dying To Love Her
3

Watch Me Take Your Girl
(The Alexanders, Book 2)

Her Premarital Ex (The
Alexanders, Book 3)

The Object of His
Obsession (The Alexanders, Book 4)

Can’t Just Be His
Friend

For more information about
the author and upcoming releases, visit her website at
www.tinamartin.net
.

When A Champion Wants
You

He couldn’t take his eyes
off of her.

Dimitrius sighed, mumbling
words of frustration to himself. Had he known Melanie would be here
at Dante’s house, he would’ve gone home instead. Now he had to see
her, and that irked him. Why? Because he liked her and since that
was the case, he preferred avoiding her, like he had managed to do
for an entire year, but now, here she was – in his line of
vision.

The only reason he’d
stopped by Dante’s place, to begin with, was to see Desmond’s new
Ducati. Desmond had just purchased the motorcycle and wanted to get
his brother’s opinions on it, but he had yet to show up.

So while he waited for
Desmond to arrive, Dimitrius kept his eyes fixed on Melanie. The
more he watched her, the more annoyed he became. Melanie was
laughing it up with his sister-in-law, Emily, sitting at a patio
table, sipping on iced tea and having a good time while pretending
she hadn’t noticed he’d been standing in the driveway for close to
twenty minutes.

Another sigh escaped his
lips. He needed to leave, but where was Desmond?

“
What time did he say he
was coming again?” Dimitrius asked Dante, glancing at his watch,
then settling his gaze back on Melanie.

“
He should be here any
minute now,” Dante said standing up, brushing off his pants. He had
been kneeling down, checking a tire on Emily’s car.

“
Well, he needs to hurry
up,” Dimitrius said testily. “I have better things to
do.”

Dante smirked. He knew
Dimitrius was a stickler for punctuality and time management, which
made him excellent at his job, but a pain outside of work. However,
this time, Dante got the feeling that Dimitrius was feigning
annoyance, because Desmond’s tardiness had given his petulant
brother more time to admire Melanie.

Dante pretended not to
notice how Dimitrius had been gawking shamelessly, staring at
Melanie like she was the drink of water he needed to quench a
two-day-old thirst in ninety-five-degree weather. Even when the
rumble of a motorcycle sliced through the air, signaling that
Desmond was close, Dimitrius hadn’t taken his gaze off of
Melanie.

“
Tell me about it,”
Dimitrius said, but had he even seen the motorcycle? With his eyes
still fixed on Melanie, he took his time beholding the beauty of
her.

“
You
are
talking about the bike, aren’t
you, Dimitrius?” Dante said, looking mildly amused.

Dimitrius snapped out of
his trance, then looked at the bike. “Yes. Of course I’m talking
about the bike. What else would I be talking about?”

Desmond shut off the engine
and got off of the bike. Then he pulled the helmet off of his head.
“Well? What’s the verdict?”

“
This is a hot motorcycle,
man,” Dante said impressed, walking over to the bike, throwing one
leg over it and wrapping his hands around the handle
bars.

“
Sounds tempting, but I
think I’ll pass, Des. I’ve never ridden a motorcycle in my life,
and Emily would probably have a stroke worrying about me on this
thing.”

Desmond chuckled. At
twenty-nine, he was definitely the risk-taker of the family – the
one who loved to have fun. The one who lived life without limits.
He was smart, but he was also, free-spirited. His brothers were the
complete opposite, especially Dimitrius. “Hey, what do you think,
Dimitrius?” Desmond asked.

Dimitrius didn’t respond.
It’s not that he wasn’t impressed by the thirty-thousand dollar
beast of a motorcycle. He was just fascinated by something else
more remarkable – how a woman could be so beautiful.

Every movement of hers
seemed to be graceful. Elegant. When she flicked her hair away from
her face and exposed those high cheekbones, it seemed to have been
happening in slow motion. She even had one of those bright,
impeccable smiles that solidified her appeal.

“
So what do you think,
Dimitrius?” Desmond asked again.

Dimitrius heard his brother
say something, but whatever it was, it wasn’t important enough to
make him to take his eyes off of Melanie. She was dangerous for a
man like him – had him thinking about things that frightened him –
things he could admit to avoiding all his life, but she was the
type of woman to make a man reconsider his entire life plan. To
make a man change. That, he didn’t like. He hated feeling like he
was losing control. He couldn’t give her any sort of power over
him. And he wouldn’t.

“
Dimitrius?” Desmond said
to get his brother’s attention. “You here with us?”

“
I don’t think it’s the
bike that Dimitrius is interested in right now,” Dante quipped,
then tilted his head in Melanie’s direction.

Dimitrius frowned. “Not at
all,” he said, slightly agitated. “Something’s wrong with Dante’s
neck apparently.”

Dante laughed. “Dimitrius,
it’s okay, man. If you like her—”

“
I don’t like her,”
Dimitrius heard himself say and knew it was a lie before the words
even left his mouth. He liked her. He just refused to act on
that
like
.

He managed to dodge her for
a year – an entire year – completely dismissing the notion of
wanting to get to know her. But today, he couldn’t avoid
her.

To make matters worse, he
knew he couldn’t escape her, especially since Dante had his eyes on
Melanie for the new marketing manager position at The Champion
Corporation. Her interview was in a week. How could he continue to
dodge her if she would be working in the same building as him? It
would be virtually impossible.

Dimitrius shook his head.
While his brothers were busy discussing the motorcycle, he looked
at Melanie, giving her one last stare-down, hoping it would be his
last. “I have to get out of here,” he grumbled to himself then
said, “The bike is nice, Des. Sorry I can’t stick around. I have to
run.”

“
Alright,” Desmond and
Dante said together. Neither were surprised by Dimitrius’ quick
departure. Dimitrius had been progressively becoming more and more
agitated and grumpy in the last few months and neither knew
why.

“
See you later, bro,” Dante
said, but eventually he’d planned on finding out why Dimitrius had
been acting so strange.

“
Yep,” Dimitrius responded,
wasting no time walking towards his car. Before sitting on the
driver seat, he took off his suit jacket and laid it on the
passenger seat. Then he got into the car and just sat there, trying
to get his hammering heart under control. Gosh, he had to get this
woman out of his life, and for good. He didn’t know how he would do
it, especially since Melanie was best friends with his brother’s
wife, but he had to avoid her like the plague, even if it meant
convincing Dante and Desmond that Melanie wasn’t the woman for the
marketing manager position. He didn’t care how qualified she was –
she could not work for The Champion Corporation, and he would do
everything in his power to make sure that she didn’t.

“
Emily I don’t
know if I should take this job or not,” Melanie
said, sitting on her bed with a laptop resting on her thighs,
browsing over interview tips while the eleven o’clock news aired
faintly in the background.

“
Well, for starters, I
don’t know if I have the expertise your husband is looking for in
this managerial role.”

Emily smiled. Being his
wife, she knew Dante was a perfectionist when it came to
organization and details. He would carefully select the right
candidate for the position, to keep The Champion Corporation
thriving. After all, he hadn’t built a multi-million-dollar empire
by being a sloppy businessman.

To set her best friend’s
mind at ease, Emily said, “Trust me, Mel. If Dante hand-picked you
to come in for an interview, then you must be the person for the
job. Give yourself a little credit, woman.”

Melanie sighed. Unbeknownst
to Emily, there had been another reason why she was hesitant to
take the job – a six-foot-three tall, handsome reason – Dimitrius
Champion. Melanie wasn’t sure if she could work with him. She
couldn’t deny how fly the man was. She could only imagine that
being in the same room with him was sure to give her heart
palpitations.

Five years younger than his
brother Dante, Dimitrius attended several functions at her hotel
with his brothers and representatives from their company. There had
been a few times Melanie caught herself locking eyes with him, and
he didn’t hesitate to hold her gaze. He’d given her that
look
, the look a man
gives a woman to let her know he’s interested and waiting for her
to emit some of those same signals back. And he was downright sexy,
as all the Champion men were, but something about him was different
from the others. Dimitrius seemed to have a chip on his broad
shoulders. Even when he looked at her, she noticed he had a
serious, mysterious, stoic look that was cold enough to freeze
water in an ice tray – a look that confirmed he wasn’t for play.
His no-nonsense, confident attitude classified him as the type of
man who, not only never smiled, but didn’t take the time to relax –
not even a little. The word
fun
was probably foreign to him. He was all about
work.

He stayed rocking
thousand-dollar suits. Stayed in business mode. He probably didn’t
own any casual clothes. Did the man
really
work 24/7?

Even at Emily’s house a
week ago, when the brothers had gathered to check out Desmond’s
motorcycle, Dimitrius had on a suit. And Melanie did everything in
her power to avoid him, even pretending she hadn’t see
him.

Fractured by Amanda Meadows
Ward Z: Revelation by Cross, Amy
Dr Berlin by Francis Bennett
Rogue Element by David Rollins
Catalyst (The Best Days #1) by Lake, Delaina
The Boy in the Black Suit by Jason Reynolds
Washington and Caesar by Christian Cameron
An Unsuitable Duchess by Laurie Benson
The Lady And The Lake by Collier, Diane
Betrayal by Amy Meredith