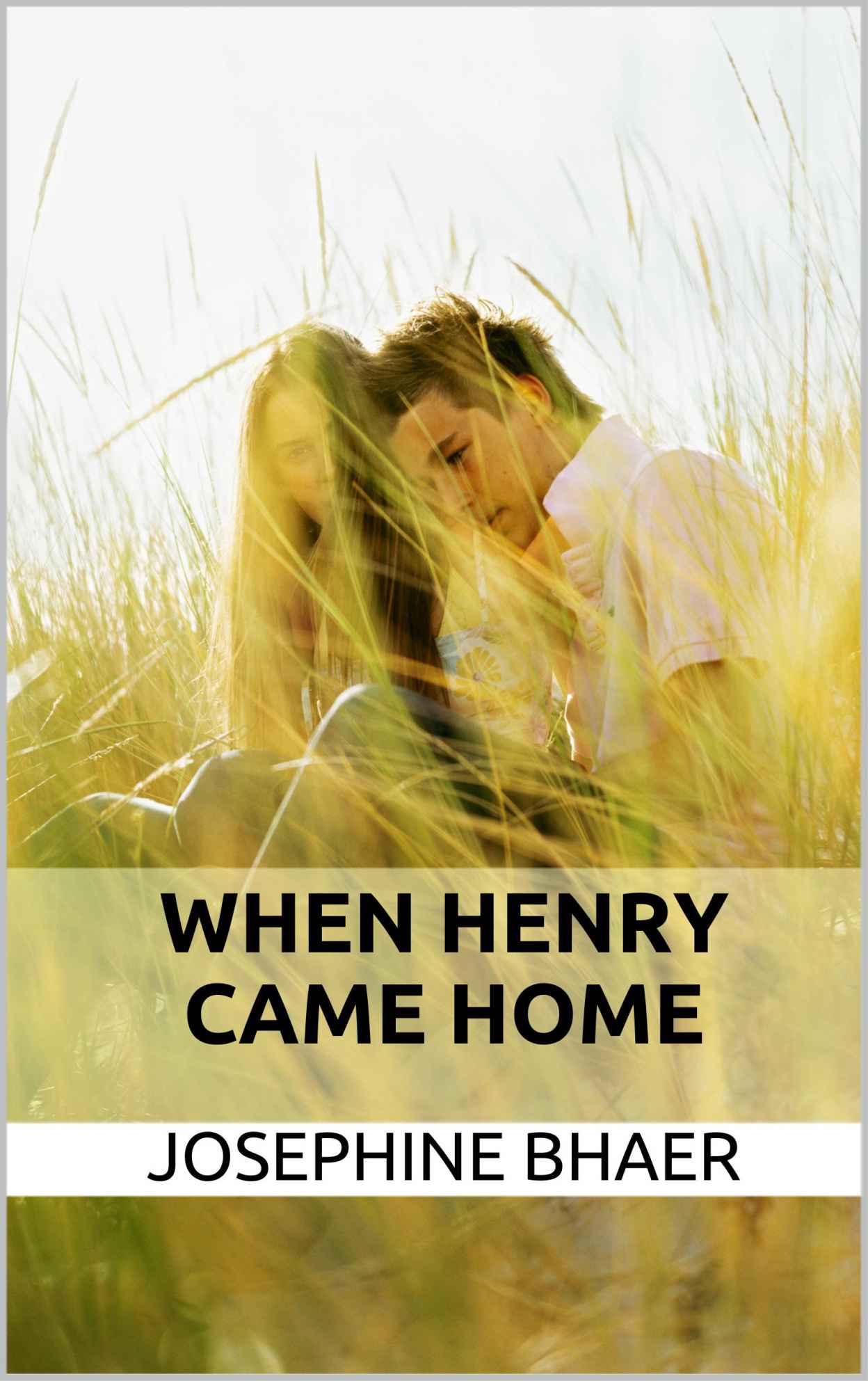 Mary saw the man with the cane upside down and through a waterfall of nut-brown hair. She would have stopped and looked down the road to see who it was, but she was attempting for the third time to pry a rock from Gin-Honey's hoof—and was determined to succeed, even if she passed out from the blood running into her head from being bent over so long. The little sorrel snorted, upset at having her leg held up so awkwardly, and struggled to free herself. But Mary was not about to give in and try for a fourth time later that afternoon; she was bound determined not to let Gin get the better of her, and told the horse so in no uncertain terms. At this, Gin-Honey seemed to relent a little, and with a jerk the rock was freed. Grinning, Mary stood and leaned against the little horse, then patted its rump and sent it back out into the field to graze.

Shading her eyes, she turned her attention back down the dusty road, to see who the visitor was. He was close now, and Mary saw with a little surprise that it was Henry, the boy from the Peterson ranch. He had gone to fight in the war with his brother, almost two years ago now, and had disappeared from Mary's consciousness about two weeks after his departure. Life was slow in the Oklahoma territories, and she took it as it came, not thinking too much about the past or the future or what had been taken from her life. It was her amiable opinion that if one dwelt on the past too much it would only make him sick at heart, remembering all the loss. Friends came and went, either moving on or dying, and she carried a little bit of each of them inside, but not in a way that recalled names or places or events. Each person taught her things about life, and these things she remembered long after their names were forgotten. In this way, she had not cried over Henry when he had gone, as her sister had about his older brother, John, though they had been passing friends-- even going to the fair, one year, for dancing. He had simply been gone one day, without much fanfare, and had no longer been a part of her life. In all regards, he had ceased to exist. Even his letter to her sister, telling of John's death, she had viewed as no more than a note from some other time, foreign and inconsequential.

Now that he had returned, it was not much different; he had begun to exist again, and, she guessed, would probably become a frequent sight once more. She smiled, and waved. "Hey, Henry!" she called. He was almost to the fence now, and she saw that he carried the cane because he had use for it; she saw that he must have been wounded in the war, and sent home.

"Afternoon, Mary," he answered pleasantly. He returned her smile, but she saw that his eyes did not match. There was a sadness in them that did not go away, even on such a sunny spring day.

"When did you get home?" she asked.

He stopped, the fence between them. "Oh, two nights ago."

"I bet Mrs. Peterson is glad."

"Yeah, Ma was pretty excited all right. It was three hours almost 'fore she stopped crying. How's your folks?"

He studied the ground a moment or two. "Sarah take it hard? About… John?"

Mary stepped up on the first rail of the fence and rested her head in arms crossed over the top. "Yeah, for a while. Wouldn't come out of her room, at first, and Ma made me take her meals. You bring his body home with you?"

"No," Henry looked out over the plain, then back at Mary. "No, I had to leave him back east. Found a real nice spot, though. Real nice."

Henry held his cane out at an angle, looking at it a minute. "Naw, not as bad as some, I guess. Bad enough to get me sent home, anyway. Say, your sister in? I got a letter for her John wrote, wanted me to give it to her myself."

"Sure," Mary pointed towards the house, up on the hill. "In the kitchen, doing needlework, last I saw."

"See you around," Mary echoed after him, as he turned slowly down the road, the sadness still in his eyes. She decided it was strange, seeing a young man walking with a cane. It was like a piece of his youth had been torn off of him, where everyone else could see. "Tell my folks I'll be off ridin’ till sunset!" she called to his back. He turned around and waved that he had heard, and Mary ran off to catch Gin-Honey.

That night at the dinner table, Sarah looked a little morose, and Mary could see a little bit of John's letter sticking out from where she was keeping it in her bosom, close to her heart. She didn't blame Sarah for being sad over John; that was just Sarah's way, and she was sure it would wear off in a day or so. "What did that letter say, Sarah?" she asked, passing the peas.

Sarah turned red and burst into tears. She stood and ran to the stairs and up to her and Mary's bedroom, clutching at the letter.

Ma looked like she was going to go at Mary, but Pa put a hand on her knee and she stilled. "Let the girl alone, Mary," said Pa, in his calm, assuring way. "She'll need a little more time alone."

"I know, darlin', but Sarah don't see things like you and I. She holds on to them, longer, sometimes."

"Martha, tend to your hellions," said Pa with a grin.

"Oh, you just hush," Ma returned, swatting at him, but with a smile.

For a long while that night, Sarah wouldn't look at Mary, and at last Mary gave up trying to make her and went to bed, irritated. She had just started to doze off when Sarah climbed in next to her. Mary could hear the rustle of papers, and stayed still.

"Mary, his blood is on this paper," she said, choking back tears.

Pa sent Mary over to the Peterson ranch the next day, to fetch Henry. "But Pa," she had protested, "he's crippled now; he can't do no work." Before the war, both Henry and John had come over to their place often, to mend fences or do other odd jobs. Mrs. Peterson had eight strong children, five of them boys, and there was always a hungry mouth to feed, so extra money was needed, and her boys did the work gladly.

"Don't worry," Pa had replied, "I got somethin' he can do, won't take anything but a strong mind. That's somethin I've always admired about that boy."

So Mary went, and Henry came without questions, although Mary did not explain what her father had wanted. She tried to walk slow for him, but her energy was high with the sun, and she ran ahead, then back again to meet him, again and again. She ducked under the fence lining the road to pick flowers when she saw them, and laced a few into her long hair.

"Mary, do you ever tire?" Henry asked easily, with a smile.

She fell into step beside him, remembering after a moment to smooth her dress. "Sorry, Henry," she apologized. "I just got to run where the wind takes me on a day like this."

"No need to apologize for bein' free. It's just beyond me how you can still have as much fire in you as when we were kids."

Mary paused a moment. She had never considered that she wasn't a child anymore. She still felt like one. "I guess I never thought to stop," she told him at last.

He smiled again, and laughed a little. "I like you, Mary," he said.

"Let's go on a picnic," she said, suddenly. "Tomorrow, if the weather's still like this, out over that hill. I've got my own place there I like to go."

"I remember. You followed me and I was angry, but not very."

"I suppose I did follow you, after all. I'm invited this time, with your consent?"

Pa came out onto the porch, a big, strong shadow in the afternoon shade. "Your ma's in the kitchen and wants you," he told Mary. "She's mighty hot with that oven, so don't provoke her or we'll be eating burnt biscuits tonight."

Pa went down to meet Henry halfway up the hill, and shook his hand. "You look fine, boy," he boomed, "mighty fine."

"I can't work for you anymore, Mr. Jacobs," he said politely, apologetic. "Doctors tell me I'll never get rid of this cane."

Pa threw his arm around Henry and they walked towards the house. "A man like me, he'd have been ruint by what happened to you, son. He'd have nowhere to go. But a man like you, who's got schooling, he's got options. Might even be better off, out of the ranching business. Live longer, anyway."

They were at the porch, and Pa gripped Henry's arm to help him up the three stairs without much thought. "See here-- you've always had a head for figures, and I never had much stomach for it, more and more it seems, every year. Suppose you help me out a little. I got all the numbers—the cattle tally, horse count, acreage, whatever. All the numbers you want. You just do the calculating—feed I'll need this year, the price I gotta sell my beef at. That sort of thing."

"Nonsense!" boomed Pa. "You say that because you ain't never done it, have you?"

"Durn well took me three weeks last season, boy! Not only that, my eyes are goin' bad. I can see all right, just not up close and all those little numbers. If you don't do it, I'm goin' to have to hire that blasted lawyer in town. You want the job or not?"

"Good, good." Pa pumped Henry's hand, then filled it with a stack of papers. "There's the numbers," he said. "That one on top is the list of what I need you to figure. Do it when you like, but I'll need it by next Wednesday."

"No, I got to get back to Ma. Young Simon's been feelin' poorly and she don't trust anyone but me to look after him. If I don't get back, she'll never get a mite of rest."

"You tell that woman she's right in trusting you, son."

Henry reddened slightly. "Thank you, sir," he said again, and turned to go.

Not long after he had shut the door behind him, Mary raced out of the kitchen. Her father caught her and kissed her on the nose. "Are we having burnt biscuits, darlin'?"

Mary slapped his shoulder fondly. "No, Pa, I was good. Did Henry leave already?"

But Mary was already out on the porch. "Henry!" she called; he was at the bottom of the hill. "Tomorrow at noon, by the sycamore?"

He waved that he had heard, and agreed.

Mary stood in front of the long hallway mirror that night, turning and twisting to examine herself. Then, she stared straight into her own eyes, frozen, for a long time. Ma came around the corner then, and bumped into her.

"Well—Mary, I thought you'd be in bed by now. What are you doin' down here so late?"

Ma looked into Mary's reflected eyes. "Why girl, you just noticing it now? Why d'you think all of your clothes been gettin' so small you gotta wear Sarah's things?"