Read Where There's a Will (Whiskey River Book 1) Online

Where There's a Will (Whiskey River Book 1) 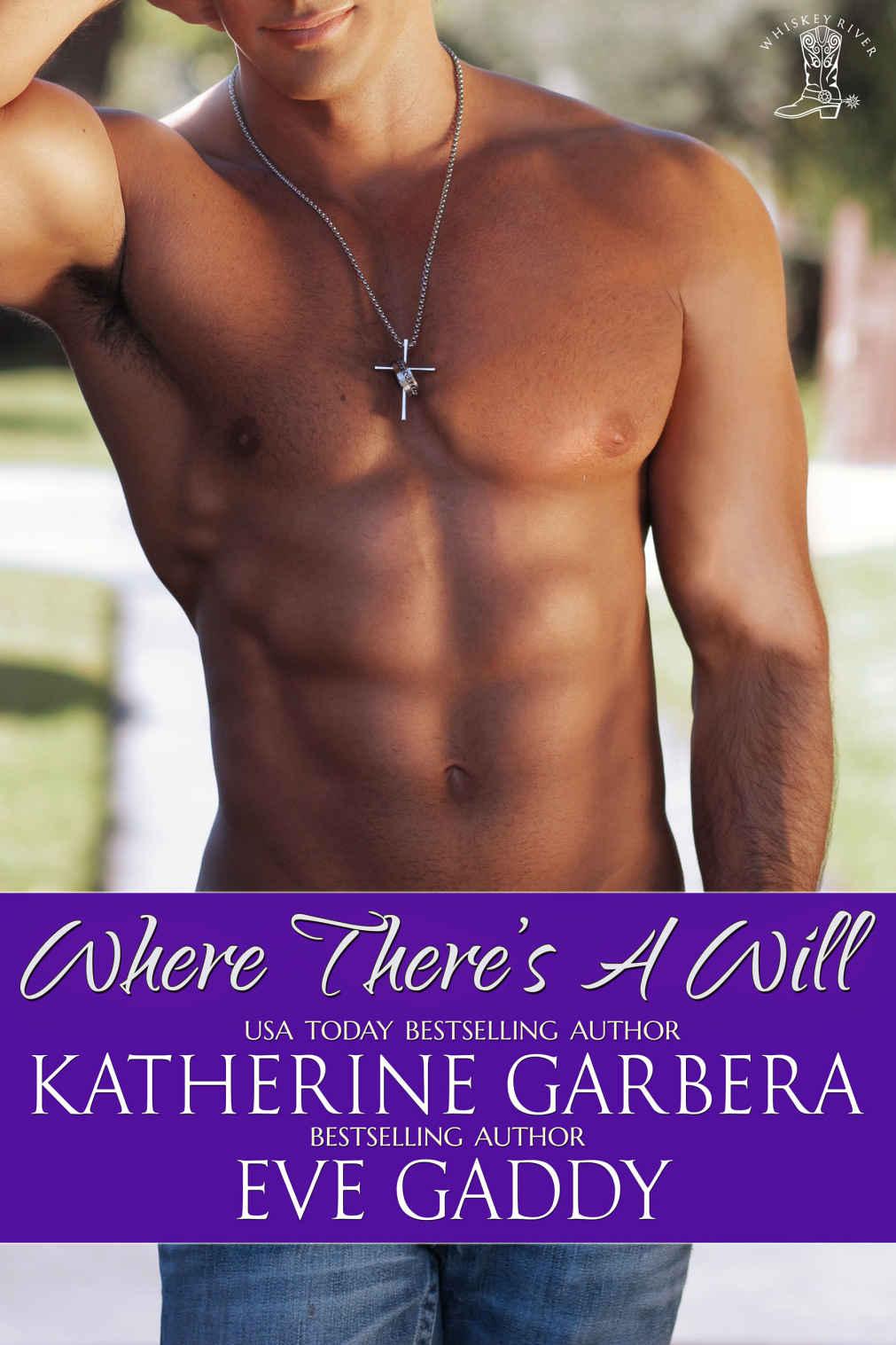 Where There’s a Will

Where There’s a Will

This book is dedicated to our fellow Evelettes, Denise, Janet, & Lenora. It’s so good to have women (and writer!) friends and know they will always have our backs.

We’ve been friends for almost 20 years and critique partners for a huge chunk of that time. So we really know each other’s strengths and weaknesses. We both have a deep love of Texas so when we started toying with the idea of writing a series together it was natural to set it in Texas.

Then we started having fun. We came up with the idea of a fun-loving playboy who was known for his charm, his money, and his way with women. And then added in a secret. What if he had a hidden family? What if only after his death would all of his sons get a chance to know each other?

Well the ideas were flowing fast at that point and we started hammering out the series. We’d each write on legitimate son (Wyatt and Trey Kelly) and one illegitimate son (Nicholas and Xander Blue) but we needed someone to set up the story.

Ryder Ford is the Kellys’ cousin and family lawyer. None of the sons think that client-lawyer privilege is a good enough reason to spring a bombshell like this on them.

Ryder doesn’t have a lot of time to worry about his cousins’ displeasure since he’s busy trying not to notice his legal secretary. The very sexy, but oh, so, not available to him (she works for him!) Addison Wells.

We hope you enjoy this prequel novella and our entire series!

B
OOTS
K
ELLY DIED
as he had lived. Bigger than life, going out in a spectacular fiery car crash, driving his brand new McLaren with a twenty-one-year-old runway model rumored to be his newest mistress beside him.

Now Ryder Ford, cousin and attorney for the Kelly clan, had the unenviable task of reading Boots Kelly’s will to his heirs.
All
of his heirs.

Four brothers, two legitimate, two illegitimate and neither set knowing anything about the other. Squeezing the bridge of his nose, Ryder wished, not for the first time, that he’d never agreed to become the Kelly family lawyer. But his mom would have stopped speaking to him if he’d refused, so in the interest of keeping the family peace he’d agreed.

Ryder had tried like hell to convince Boots to come clean, but his uncle’s response had been clear, and typical of him. “Mind your own business, son. Just because you’re kinfolk doesn’t mean I won’t fire you. They’ll all find out in due time. Once I’m dead,” he’d said with a chuckle. “I’d sure as hell like to be around to see it, though.”

Boots wouldn’t be there but his ex-wife, Paloma, would be. Ryder supressed a shudder. Divorced years ago, Paloma and Boots had split their assets at the time of the divorce. Both had done nothing but grow wealthier since. Boots had included Paloma in the will, however, because, Ryder knew, he wanted to stick it to her. Ryder could well imagine Paloma’s reaction to this bombshell—an explosion to make Mt. St. Helens look like a firecracker.

As for Nicholas and Xander Blue, Boots had claimed his twin sons knew nothing about their biological father. In fact, he maintained he’d never met them. Their mother, Lorna Blue, had forbidden all contact, and much to Ryder’s surprise, Boots had apparently respected her wishes. But, and it was a big one, Boots would have the last word when Ryder had to read the damn will to his unsuspecting family.

Ryder’s law firm was housed in a beautiful, older home in a now commercialized part of Whiskey River, a town on a tributary of the Pedernales River in the Texas hill country. His partners, Fiona Lannigan and Johnny Gamble, weren’t in today. Fiona had a family emergency in Austin and God only knew where Johnny was, as this was his day off. Only Ryder and his legal secretary, Addison Wells, were there working today. He wondered if Addison had reached the Blues yet. Since Ryder couldn’t tell them their father had named them in his will, he had Addison call. Addison was great with people and if anyone could get the two men to show up with very little information about why they should agree to come, it was Addison.

He punched a button for the speakerphone. “Addison, did you reach the Blues?”

“Yes. I set up a meeting. They couldn’t do it right away, so”—She broke off and said in a different tone, “Oh, my God” and hung up abruptly.

Puzzled, Ryder glanced out his office window, noting that the sky was even darker than it had been a few minutes ago.

Seconds later, Addison entered his office. “Have you heard the weather? We’re under a tornado watch.” She crossed to the window and looked out. Even with her back to him, he could tell she was worried.

His gaze took in the soft, flowing red dress that hit just above her knees, slipped down those beautiful legs to the siren red high heels she wore that made him just a little crazy. Which, he supposed, was what high heels were designed to do.

Damn it, he’d never looked at her legs in the past.
Or not much
. But he hadn’t been able to look at her the same since the office Christmas party. He should never have kissed her.

Don’t think about it
, he ordered himself for the hundredth time.
That was months ago.
“It’s just a tornado watch. We have those all the time. It doesn’t mean there’s an actual sighting.” He knew she didn’t like bad weather, but he’d always sensed there was a little more to it than simple dislike. She’d never told him, though.

Addison was very much all business . . . except that one time at the office Christmas party. Under the mistletoe.

She turned around and looked at him. “This one’s different. I can feel it.”

“So, what, you want to go hide in the closet?” He said it flippantly because he could think of few things more tempting than being alone in a small, enclosed space with Addison Wells.

“You bet I do. The minute I hear the sirens I’m there. Turn on the TV and see what the local channels say.”

Ryder shook his head but did as she asked. She came to stand beside him and look at the TV on the opposite wall.

“It looks nasty,” he said, watching the greens, yellows, oranges and reds of the map. Such pretty colors for such potentially destructive phenomena.

“They’ve upgraded to a warning. One was sighted near Kerr,” she said, her voice betraying her anxiety.

“Kerr isn’t even in the same county as we are. Gillespie is under a watch, not a warning,” he said, speaking of the county where Whiskey River was located. Not yet, anyway.

“Kerr is the next county over! Look at the storm cells. They’re headed right for us.”

Even as he opened his mouth to say something soothing, the weather station upgraded Gillespie County to a tornado warning as well.

“I told you so,” Addison said grimly. “What’s the matter with you? You know how dangerous tornadoes are.”

“Calm down, Addison.” He knew as soon as he said it that he’d made a mistake. Her eyes, a deep, jade green like he’d rarely seen, flashed fire. For a moment he thought she was going to slug him.

Instead she whirled and started toward the door. Ryder stood up and managed to grab her arm before she could reach it. “I simply meant we could go sit in the closet. There’s no need to panic.”

He winced, wondering what made him say exactly the wrong thing. Again.

“I am not panicked,” she said through clenched teeth, pulling her arm loose. “Are you coming?”

Her tone implied she’d just as soon he didn’t. He ignored that. “Right behind you.”

There was a small closet under the stairs that he and his partners had designated the official tornado shelter. It had been used before, though not often. Ryder had never had to retreat there. They kept it stocked with a radio, extra batteries, water, a few non-perishable foods, a battery-operated electric lantern, and blankets. They even kept a twin mattress inside, in case the tornado came really close. Of course, when the closet wasn’t being used as a shelter, it doubled as a storeroom. Which meant he was going to have to drag boxes out before it would be functional.

Addison yanked open the door. “Damn it! What’s the matter with you people? It’s supposed to be a storm shelter, not a junk room. I can’t wedge my shoe in there.”

She had a point, even though that was an exaggeration. “Move out of the way, and I’ll clear it.”

Ignoring him, she bent down and dragged out the first box she saw. Ryder groaned inwardly, thinking totally inappropriate thoughts.

He managed to elbow her aside and remove the bulkiest items. Besides boxes, there was an assortment of other items. Including a bike, of all things. Before long they had it cleaned out enough to be able to use it.

“After you,” he said, motioning her inside. Ducking his head, he followed her in.

The closet light was still on and he checked his cell phone, noting that it still had bars. Addison rustled around, arranging the lantern, a flashlight, and the battery operated radio, which she tuned to local weather.

“Cozy, isn’t it?” Too cozy. How was he supposed to keep his hands to himself in a situation like this?

Addison said nothing, removing her shoes and sitting cross-legged on the mattress, arranging her dress to cover her legs. Oh, man, why did she have to look so pretty today? Her long dark hair was down around her shoulders instead of pulled back or piled on top of her head as she often wore it. As if she felt him staring at her, she raised her eyes to his. She ran her tongue over her lips, unpainted because she’d nibbled all her lipstick off. Her mouth didn’t need lipstick anyway. Her lips were full and rosy, with the hint of a pout. The rest of her face, classic nose, high cheekbones, beautiful skin, wasn’t bad either. Those green eyes stared at him unwaveringly.

He wanted to kiss her. To be completely honest, he wanted to do a hell of a lot more than kiss her. But she’d never acted interested in starting anything with him.

Until the Christmas party when she’d kissed him beneath the mistletoe.
She
had kissed
him
. After his initial surprise, he’d put his arms around her and pulled her close. And totally forgotten it was just a mistletoe kiss. But so had Addison.

Damn it. He wanted to kiss her again. Just as he had every day since then. Wanted her to the point that he hadn’t spared a thought for another woman since that night.

They stared at each other. Was she remembering the kiss? Had it driven her crazy, like it had him? “Addison?”

“Why are you so afraid of tornadoes?”