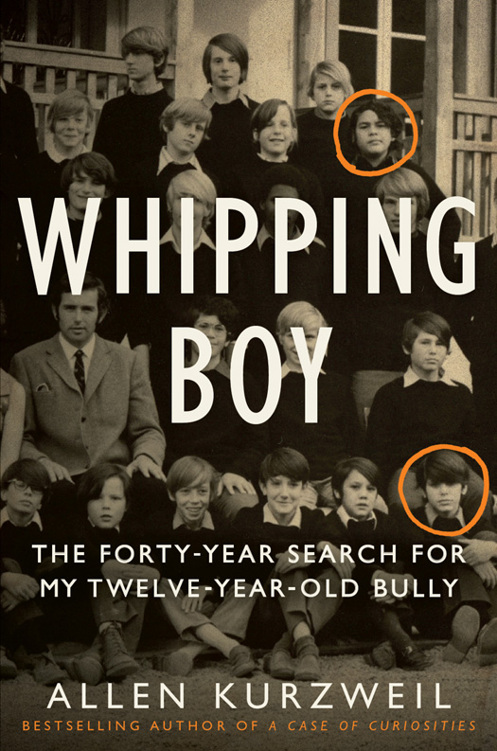 In memory of my father, for the things he invented

With gratitude to my mother, for the things she preserved

“WE HOPE TO MAKE YOUR JOURNEY UNFORGETTABLE”

“A LIE, A CONTRIVANCE, A FICTION”

“WHAT LIES WITHIN US”

“PAPER IN HIS BLOOD”

This is a work of nonfiction.

No names have been changed.

In the little world in which children have their existence whosoever brings them up, there is nothing so finely perceived and so finely felt, as injustice.

My youthful innocence suffered an injury. It was a slight scratch, which in the course of time grew into a gaping wound that cut deep into my flesh and did not close.

Hans Keilson
,
The Death of the Adversary

You’ve been a menace and a muse. A beacon and a roadblock. My jailer and my travel agent.

You have this uncanny habit of popping up in the most unexpected places. During a walk through the Louvre. At the back of a bar. In the lyrics of a Broadway show tune.

If
The Da Vinci Code
shows up on TV or if I’m playing foosball with my son, if I spot a certain kind of fountain pen or a particular brand of wristwatch, there’s a good chance I’ll find myself thinking of you.

The prompts aren’t always that subtle. A few years back, a credit card company website summoned the obsession directly with a password hint: “Who was your archrival when you were growing up?”

Without a second thought, I entered the name of the boy who entered my life when I was ten years old—entered my life and reshaped it forever: C-E-S-A-R A-U-G-U-S-T-U-S.

Even if I hadn’t bunked with a kid named Cesar Augustus, memories of the Swiss boarding school that brought us together surely would have stuck. The eccentric imperatives of the institution’s forward-thinking founder and the exotic backgrounds of the teachers he employed, the daily meditations promoting liberty and the thirty-six-page handbook that curtailed it, the lessons in swordsmanship and elocution, the alpine expeditions, cold showers and soybean steaks . . . all of it was way,
way
too strange to forget.

Established on an mountain plain high above Geneva in 1949, Aiglon (pronounced
EGG-lawn
) was the brainchild of John Corlette, a headstrong, asthmatic Englishman with a singular vision of what a boarding school should be: regimented yet free-spirited, full of fearless high-altitude adventure and moral enlightenment. JC—yes, that’s how the founder chose to be addressed—believed physical fitness and spiritual reflection nurtured body and soul and that obedience was a prerequisite for independence.

Well, not by me, they weren’t. As the school’s youngest pupil, the runt of the litter, I found myself at the very bottom of a pseudo-military pyramid codified in the aforementioned handbook. I received a copy of
Rules and Ranks
the day I arrived, September 1, 1971, and was given a written test on its contents a few weeks later.

Every lower-schooler entered Aiglon a so-called no-rank, with promotion to junior green badge summarily awarded to all but the most noncompliant plebe. The appearance of hard work, academic achievement, physical prowess, or moral rectitude (translation: brownnosing) paved the way for further upgrades, first to junior red
badge, then to silver eagle, and from there to the lofty rank of golden eagle. A new sweater pin accompanied each promotion, as did a correlative bump in the pocket money handed out each Wednesday afternoon.

Upper-schoolers could climb even higher through JC’s Rank System by becoming standard-bearer candidates, then standard-bearers, then captains, and finally (for the two most even-keeled and charismatic pupils in the school) head girl and guardian, the latter honorific optimistically filched from Plato’s
Republic
.

Nuanced enough? Not for JC. He tweaked the protocol further by introducing stars. I recall this small refinement because the School Council promoted me to junior green badge
star
soon after I took first place at a regional track meet. (Two months later, I was stripped of the spangle when a dining-hall monitor caught me shirking my duties.) As a junior red badge star, the highest rank I achieved, my weekly “pay” was pegged at five Swiss francs, or roughly $1.25. Although the school took care of laundry, haircuts, postage, and paper, it was up to me to cover all miscellaneous expenses, and at Aiglon those expenses included fines.

Say the house captain caught me flicking a towel or the dining-hall monitor noticed I was tilting backward in my chair. Suppose the outside tidiness captain found grease on my camping gear or his residential counterpart observed that I’d left a light on during
the day. Any one of those slipups could trigger a fine of twenty to fifty centimes. And don’t for a second think a parent could cover those charges. External financial assistance was, at least in principle, banned from campus.

“The moment a student is given extra sums of money over and above his earned income, the education value of the system is destroyed,” JC noted in a brochure sent to my mother. The regulations tied to this apocalyptic premise were spelled out in the “Money and Trade” section of the
Rules
:

All and any currency exceeding five francs in total value must be handed to your housemaster at the beginning of each term. Any other money received by you during the term for birthdays, etc. must be handed in at once.

I was ten and terrified. I obeyed JC’s monetary restrictions. Most older students did not. Aiglon sustained a robust black-market economy dependent on all sorts of unsanctioned revenue streams. (Cesar, for example, did a brisk business reselling movie posters and pocketknives.) But heaven help anyone who got caught with “funds in excess of nine francs” (about two dollars). One of the nicest and most respected seniors, nabbed in flagrante delicto with a Diners Club card, got the boot two weeks before he was to graduate.

The cover of the thirty-six-page student handbook, circa 1972.

Money wasn’t the school’s only mechanism of control. Public tally boards also instilled discipline. Red marks—earned for feats of physical, spiritual, or academic virtue—signaled success
and paved the way for promotions and
bons,
tissue-paper vouchers distributed by housemasters and accepted among local shopkeepers in lieu of cash. Black marks, on the other hand, could result in a pensum, a two-page assignment on a subject of a prefect’s choosing (“The Virtues of Thrift,” “The Sex Life of the Sand Fly,” etc.). Since I was too young to be saddled with written penalties, my waywardness usually resulted in “laps”—punishment runs requiring me to dash to a stone bridge and back, a hillside circuit of about a mile. Late for class? Laps. In the hallway after lights-out? Laps. Spotted crossing the invisible one-meter barrier surrounding the assistant housemaster’s VW Bug? Caught “being slimy,” “exhibiting loutish behavior,” or “micturating on a football pitch”? Laps, laps, and more laps.

The surveillance of conduct wasn’t restricted to adults. Each of the school’s five alphabetically named houses—Alpina, Belvedere, Clairmont, Delaware, and Exeter—operated under its own student-run bureaucracy. House captains managed prefects, prefects kept tabs on monitors, and monitors oversaw the rest of us. Everyone had at least one house chore. Besides serving as a yogurt carrier—a low-level job not to be confused with the more exalted position of yogurt
checker
—I also was compelled to provide assistance to a shower monitor with an imperial name.

Let’s rewind for a moment. How does a ten-year-old Jewish kid from New York end up at a Swiss boarding school founded by a mystically inclined Christian Englishman? For years, I had a ready response to that question: “My mother warehoused me in Aiglon while she was test-driving her third husband.”

But that glibness is misleading and unfair. I
wanted
to go to Aiglon. I
campaigned
to attend. And I did so for reasons that can be traced back to the alpine passions of another ten-year-old Jewish kid.

My father, born in Vienna in 1911, was raised to love the mountains. In a journal he kept as a young boy, he drew pictures inspired by his weekend hikes through the Vienna Woods—sketches of mountain ranges, flowers (snowdrops in particular), hound dogs, and deer. When he turned twelve, my father joined the local chapter of a socialist scouting organization called the Rote Falken, or Red Hawks. With like-minded leftists, he hiked, rope-climbed, and skied the Wienerwald and the Alps. Those adventures, and pretty much every other pleasure in his life, ceased once Hitler came to power. In 1938, he was arrested, along with most of his comrades. Yet unlike them, he managed to get himself released. Soon after he fled to England—the details of the escape are fuzzy—and from there immigrated to the United States, where he found work as a mechanical engineer.