Wings of the Morning (Kensington Chronicles) 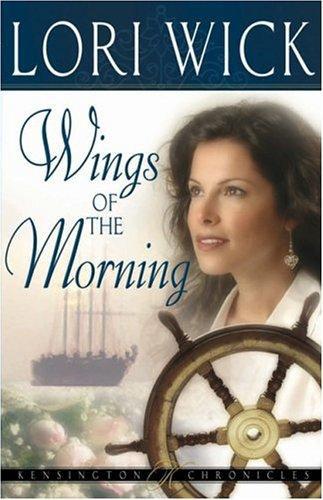 Wings of the Morning,

During the nineteenth century, the palace at Kensington represented

the noble heritage of Britain's young queen and the simple

elegance of a never-to-be-forgotten era. The Victorian Age was the

pinnacle of England's dreams, a time of sweeping adventure and

gentle love. It is during this time, when hope was bright with

promise, that this series is set.

the two little boys ran up the sandy beach, fiercely

brandishing their sticks as swords. As the older boy at the rear

drew close, the smaller boy dashed up into the rocks to

escape. He turned and shouted to his brother from his lofty

"It's my turn to be Clancy for a while. You can be the

"No, I'm bigger, and that makes me a better Clancy."

"But you're always Clancy," the younger boy complained.

"That's because he always wins," his brother told him

The younger boy flopped down on the rock, his "sword"

lying forgotten at his side. His brother climbed up to join him,

their gazes stretching out over the Atlantic Ocean.

"Do you suppose Clancy really did all those things we

hear about, the races and stashing the ship's hold with gold

"Of course," the older boy spoke with assurance, although

he had no proof. "He was the best sailor in all the world."

"His ship," the younger lad had caught the fever now.

9"Please tell me about his ship."

The older boy's chest swelled "None faster in all the

Atlantic. Why, his ship was the fastest ship in all the world."

The younger boy let out a gusty sigh, as his gaze went to the

"Do you suppose he's still alive?"

"Alive? Don't be ridiculous," his brother scoffed "Why,

The younger boy looked so crestfallen, the older boy took

"It doesn't matter. We know he was the greatest sailor to

ever live. It's enough to know that he was born and raised in

Maine and that there will never be another Clancy..."

"What's this, Papa?" the tiny moppet in the tub asked her

He tickled her tummy before answering. "Why, that's your

to leave the tub. Her father, Clancy Simmons, was waiting

with a piece of toweling. He wrapped her snugly and took the

chair by the stove in his cabin, placing Smokey in his lap to

"I have five toes, Papa," she told him proudly, as she

examined the foot that protruded from the edge of the towel.

"You forgot a foot," Clancy told her. "You have ten toes."

qr t"Po you have ten toes?" Smokey wanted to know. Her

***i;smokey gray eyes stared with rapt attention into his

Bitted away, and within minutes Smokey was in her

d back in her father's lap. The warmth of the

sntle rocking of the ship lulled her to sleep just

moments later. Clancy was standing over her bunk, watching

her still form, when his first mate, Darsey, joined him.

his captain and wondered at his thoughts.

"It's hard to believe she'll be four this summer," Clancy

up before your eyes, but that it happens so fast you still feel as

though it's been a magician's trick."

"Vicky would have loved her to distraction," Clancy went

on softly. His mate had no reply.

obviously needing to pull his mind away from painful times.

dress when she's barely out of wet drawers. I've got my God,

my ship, my men, and years to enjoy my daughter. I would ask

"I'm not asking you, Smokey; I'm telling you. Mr. Tucker is joining us this voyage, and you are going to study with him."

"I don't need this Mr. Tucker. I like studying with Darsey."

Her small arms were folded across her thin chest, and her

gentle, "long past the time you should know how to read and

cipher. You've got Darsey wrapped around your finger, and

whenever you don't feel the need to study, you talk your way

out of it. It will be different with Mr. TUcker."

Smokey made no reply, and Clancy sternly held her eyes

with his own. He expected her to yield at any time and

admit that she needed training, but if anything her chin

rose yet again, and Clancy knew that stern measures were

"You'll not set foot in the galley, climb on the rigging, or

read two pages to me from a book."

All arrogance deserted Smokey, and her small shoulders

drooped. Darsey had joined them to speak to the captain, but

"Do you mean that?" Smokey asked, her voice small.

"I'm afraid I do," Clancy's voice was kind "Your schooling

is important, and I love you too much to ignore it."

"All right," Smokey spoke after just a moment, her chin

tilted once again, this time with determination. "I'll study

with Mr. Ibcker. I'll learn to read and write and do my numbers.

Both men watched her walk away, one with admiration

and one consumed with worry.

"Doesn't it bother you, Captain," Darsey asked, "that with

Smokey you don't take her toys away, but instead forbid her to

climb in the rigging?"

Clancy laughed and clapped the younger man on the back.

"Darsey, you're a young man, much too young to be such a

worrier. She's never cared for dolls. And as you can see, my

words did the trick. She'll learn to read, and that's what I

Clancy, well satisfied with the passage of events, went on

his way. Darsey, wanting to trust his legendary captain, continued

Dreading this old journal, the onelpicked up in the

"Smokey," he began after a moment of silence, hoping

none of his men would need him just now, "people love to

create heroes and worship the legends of their own imaginations.

They also love to exaggerate," he added softly.

"What do you mean?" Smokey's sweet, ten-year-old face

"I mean that the escapades IVe pulled have been stretched

until they are of monumental proportions. Why, to do all of the

things they claim Clancy has done, I'd have to be 200 years

"But you have done some great things, haven't you?"

"Yes, I have," he admitted honestly. "I've always sailed fast

ships, and in my younger days I would never pass up a wager

or a dare. My father taught me well, and I've sailed into port

more than once with a holdful of valuables, sometimes worth

a small fortune. But there was no magic in it. I work hard, and

I'm a man who keeps my word Put simply, the merchants trust

me. I deliver, and quickly I might add When something special

comes their way, they send word to me.

"And don't forget that I was named after my father. He was

a sailor too, not as foolhardy as I've been at times, but a sailor

nevertheless. The name Clancy has been on the seas far

Smokey stared at her father as though seeing him for the

first time. The look did not please the older man.

"I'm still your father, Smokey." Clancy spoke with his heart

in his eyes. "I'm still the man who loves you to distraction. I've

never wanted to be a hero or a legend to you, just a good

father, bringing you up God's way."

Smokey moved from her chair then, her young arms going

around his neck. They embraced, and the young girl's anxious

thoughts melted away. It mattered not what they said about

him, truth or fiction. He was the most wonderful father a girl

could have. His words had eliminated all doubts and fears.

"I'm afraid, Papa," Smokey cried from her bunk as the

waves tossed their craft as though it were a toy, high and low

"There's nothing to fear, Smokey," the older man's face

arms. "You were only nine when you trusted Christ to save you

from your sins, and now you must trust Him again in this

storm. If our ship is going down, then it's His time."

A moment passed, and Smokey began to pray out loud as

she had done so many times before. When she finished talking

to the Lord, Clancy added his own prayers with quiet confidence.

When he had finished, he waited for the question. She

asked it every time there was a storm, and Gancy could never

"Will you tell me about Mama?"

"She loved you," Clancy told her without preamble. "And

she wanted you for years. We weren't married until I was

nearly 40, and she thought she'd always be a spinster schoolarm,

without a husband or children of her own."

"But you came along," Smokey prodded him.

"That's right, and it was love at first sight. She gave notice

to the school board, and we were married that summer. We

both assumed we would have children right away, but it wasn't

to be. We waited years, and had actually given up. Then God

gifted us with you."

"And you named me after Mama."

"That's right. She didn't want it, but I love the name

Victoria, so she gave in."

Then she died," Smokey added on a soft, somber note.

ocy's voice was equally quiet. "She wasn't a young woman,

fr body just seemed so worn out after the birth. She had

(erly aunt and a sister who offered to take you, but I

ft leave you. I knew your place was with me. If only

e until that moment that she'd finally fallen

asleep. The storm still raged without, but Smokey was now in

Clancy rose, balancing himself with the ease of an experienced

sailor and repeated softly to himself once again, "If

only she could see you now..."

The Wimsey Papers by Dorothy Sayers
Cronicas del castillo de Brass by Michael Moorcock
Silenced by K.N. Lee
Atlantis Rising by Alyssa Day
Chow Down by Laurien Berenson
Feral Bachelorism by Lacey Savage
One You Never Leave by Lexy Timms
Arizona Skies: The Muse by Cruz, S.
The Colony: A Novel by A. J. Colucci
The Dragon Keeper by Mindy Mejia