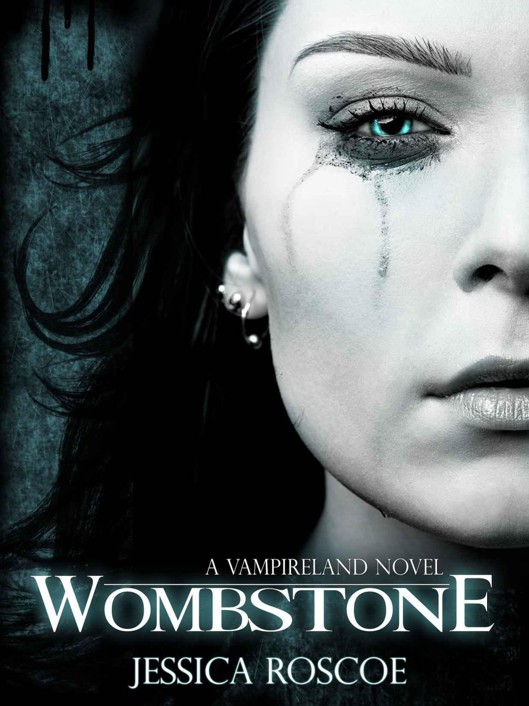 A Vampireland novel by

All rights reserved. No part of this book may be reproduced or transmitted in any form or by any means, electronic or mechanical, including emailing, photocopying, recording, or by any information storage and retrieval system, without permission in writing from the author.

This is a work of fiction. Any resemblance it bears to reality is entirely coincidental.

Those were the first words I ever heard.

I opened my eyes. Naked save for a bloodied white sheet, my tender skin covered in sticky red blood. My broken body somehow,
impossibly
, repairing itself.

“Get up and take a shower.”

I hated him for it.

I don’t really know where to start, but there must be a place. A place before the world went dark, before I learned of the horror that existed on this earth. Back when I was just a girl – though that seems so long ago, I sometimes wonder if it was just a dream.

I could start at the beginning, but where is the beginning? Was it the night I was taken? Or the balmy summer I spent falling in love, the last summer that I walked under the sun without it burning my flesh?

Maybe I should start with the night innocence came to a crashing halt. The night I was taken. Yes, I will begin my story there, in a frozen parking lot with a silent scream.

I was seventeen years old the first time I died. When I was first taken, I thought that that was it for me. I waited to die, to be torn apart by sharp teeth and vicious hands.

And I did die.

I just didn’t expect to wake up afterwards.

It was the final week of first semester in our senior year. I had just finished a mammoth session filling out college applications with my best friend, Evie.  I remember little details – the way the last few falling blossoms from the Northern Red Oaks on campus looked like drops of fire on the early December snow; the way my fragile human heart hummed with excitement that school was almost over; the way everything looked clean and new blanketed in snow. Most of all, I remember the stab of worry I had felt at taking the shortcut through the deserted football field to get home.

Blair Academy was smack in the middle of Blairstown, New Jersey. A hundred and fifty–something–year–old institution that sprawled luxuriously over four hundred manicured acres. It was preppy and expensive, and I was there because my father had attended school there, and his father before him. My father was dead. My mother was a high–powered corporate attorney who spent most of her time in her New York loft apartment with my stepfather, Warren. She had never really wanted children, and thought she couldn’t have any. She had lucked out with me – although she probably didn’t see it that way – and so I had never really had much to do with her. My father was everything to me. My mom moved to New York a few months after he died. She was meant to come home every weekend after her long week at work. She never did. I didn’t really mind. I didn’t resent her for not being my mother – I had never known or expected anything more from her, and I knew she loved me despite her maternal shortcomings. After Dad died I usually split my time between living on campus during the school week and spending weekends at our house, a few miles from school.

What I loved to do more than anything else was run. I was on the track team and when I was in the middle of a run, it was like I could fly. The college scouts had been at our annual running meet, and I had just filled out my application to a handful of elite track programs.

My best friend Evie was as poor as I was wealthy. She was on a full scholarship right through high school, and she was
smart
. She whipped my ass in most things academic. I had always been bright, but next to her I

– and the rest of the general high school population – looked like a bunch of dumbasses. Needless to say, having a best friend who was a genius made study
much
easier. The girl had a natural talent for teaching and mentoring. Her parents weren’t dirt poor, but they struggled, and to have Evie at a school like Blair Academy made them so happy. Really, they were like my adopted family. People always asked if we were sisters, I don’t know why. We were both short and sarcastic but she was strawberry blonde to my brunette, curly to my straight and had green eyes that were nothing like my blue ones. I had skin that turned brown after a day in the sun, where she had pale alabaster skin that practically glowed.

“You okay to get back to your room?” Evie asked, jerking me out of my idle thoughts.

I stopped as I realized we were standing at Evie’s car. She shook her set of keys and looking at me expectantly.

“Going to suck face with Jared?”

“You make it sound so endearing, Evangeline,” I said petulantly. “And yes, I am going to see Jared. I will most likely suck his face at some point tonight.”

“So have I,” I reminded her. “And I sure am glad he’s not my brother.” I raised my eyebrows suggestively and laughed.

Evie made a face. “Get out of here before I throw up on you.”

I exchanged goodbyes with Evie and made a beeline for my own car.

Teachers and day students got to park right at the entrance of Blair but most live–in students had to trek almost a mile to the regular boarding school parking slots. Sighing, I hoisted my bag higher on my shoulder and walked past a Crown Victoria, a Bentley and a Fiat before reaching the average–looking old clunkers in the student parking lot.

As soon as my feet touched the snow–covered oval, all thoughts of trigonometry and English lit dissolved. A jolt of adrenaline hit my stomach as I thought about finals, about Jared, about my eighteenth birthday in a few months. Everything was going so good.

Trudging through the silence, I began mentally making lists for an end–of–finals party at my perpetually parent–free house. Keg. Food. Decorations. New clothes. So, naturally, I wasn’t even looking where I was walking when the man stepped out from behind a shiny black truck. He was so close I almost tripped over him. I jerked back to reality, cursing myself for being so inattentive.

He was wearing jeans and a black sweater, and looked kind of like a thirty–something Calvin Klein underwear model with dark blue eyes, a hint of European heritage in his olive skin – Italian, maybe? – and black hair cut tight to his skull. He was the furthest thing from threatening I’d ever seen – during the day in a crowd I’d let my eyes linger on that handsome face – but at midnight in New Jersey, anything was possible. I averted my eyes and veered to the left, quickening my pace. My thoughts instantly shifted from beer and clothes shopping to serial killers and the can of bear spray in my handbag.

Pulse quickening, I passed hot dude and kept walking towards my car.
It’s cool, he’s probably just a new teacher in the wrong lot.
And then he spoke.

“Mia!” He called after me. I froze for a moment, then began to walk again. Faster, pushing my strides longer.
Just get to the car.

He laughed, a deep, throaty chuckle that sounded like caramel and in any other situation would make me melt. Instead, it made me shudder inwardly, adrenaline spiking into my muscles.

“Sorry, gotta run!” I mumbled awkwardly, almost at my car.

“Mia Blake, don’t you remember me?” He padded casually after me, the timid mouse. “Ryan. We were in Bailey's drama class together last semester.”

Bailey was a washed–up ballerina who liked to yell at her students. Of course I knew her, but I definitely didn’t know
Ryan.
He looked kind of old to be a student – not to mention,
way
too hot for me to forget.

I turned to face him, but kept walking backwards towards my car. The Honda Element sat less than twenty feet away.

Ten feet to my driver’s door.
I’m probably just being stupid
, I thought, an unfortunate side effect of growing up two hours from New York. We might have been in a nice suburb, but even so – nice people generally didn’t loiter in parking lots and teenage girls rarely walked to their cars alone. Blairstown was a place where everyone was still on alert after 9/11, even me, and I'd only been seven when the towers had fallen. Three girls had already gone missing from high school parking lots in New Jersey that year.

I am such an idiot. I should have gotten a ride with Evie.

Five feet. Walking backwards was harder than it looked, and my silver ballerina flats were getting ruined in the damp snow. Not that I cared about my stupid shoes.

“Well, gotta go.” I slid my key into the door of my car and unlocked it with a satisfying thunk.

“That's not a bad idea,” he said, stepping so close, so
fast
, that I jerked back in fright. I heard the click of a car door opening nearby, and two more guys started to walk towards us.

I pulled the can of bear spray out of my handbag, the safety switch already off. He grabbed my wrist faster than I could push the nozzle down to spray a load of mace into his face, and squeezed so hard I could feel bone crunching on itself. I gasped and let go of the can. It bounced on the asphalt and rolled underneath a blue Camry a couple of cars away from us.

“Somebody help me!” I yelled, kneeing him in the groin.

He barely reacted.
That figures
, I thought to myself.
No balls.

“Stop struggling and be quiet,” he said calmly, his grip like an iron vice on both my wrists. He smiled, showing straight white teeth and matching dimples.

I opened my mouth and screamed as loud as I could, then fell hard against the car behind me as a fist slammed into my face. I saw stars and choked, warm blood dribbling from my nose.

Great, he probably broke my nose.

I looked up to see the taller of the two offsiders pointing a gun at my face. “No more noise,” he ordered in a thick South American accent.

With my eyes half shut, I gestured to my handbag. “Take it,” I said numbly, not feeling anything but utter shock at the turn of events in my otherwise normal night. “Here, take my grandmother’s ring. It’s worth at least -”

My heart dropped at what that could mean, and bile rushed up in my throat. Before I could swallow it back, I
threw up
all over his expensive–looking black loafers. I bet nobody had ever done that to him before.

“Goddamn it!” He swore, looking at the mess I had made. “Ford, get a towel or something.”

The shorter of the two guys – the one not pointing a gun at me – scurried towards a black van.

And the Bride Wore Plaid by Karen Hawkins
Typist #2 - Spanking the Billionaire Novelist by Strong, Mimi
Salt and Saffron by Kamila Shamsie
Left for Dead by J.A. Jance
The Walls of the Universe by Paul Melko
Living in the Past: A Northern Irish Memoir by Arthur Magennis
Silver Bracelets: A Loveswept Contemporary Classic Romance by Sandra Chastain
Dark Demands 04: Bound to Him by Nell Henderson
The Invisible Wall by Harry Bernstein
A Fit of Tempera by Mary Daheim