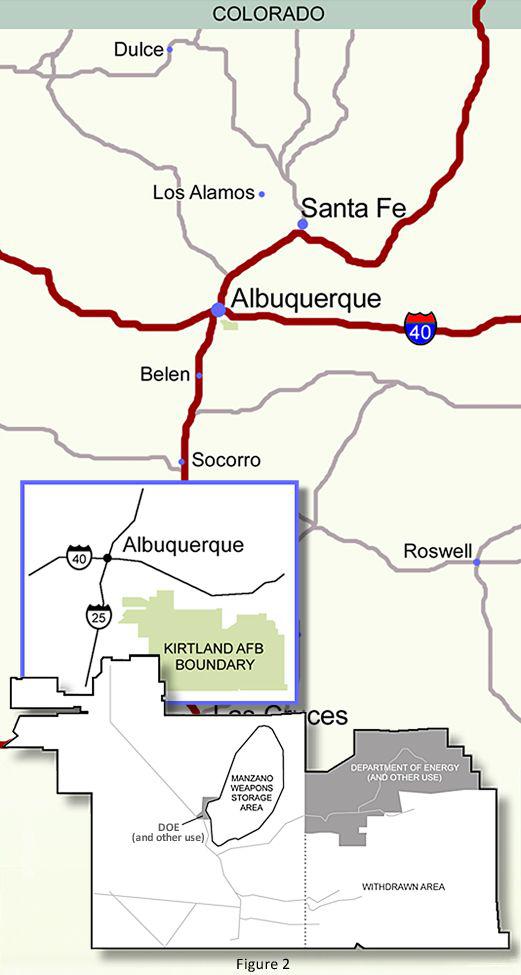 After accompanying State Patrol officer Gabe Valdez on one wild and memorable night ride in July, Paul went back over the next few months and photographed a number of strange things in the area. The first time he went with his son, on his last trip he went alone, but it was all merely a precursor to what would come. Something happened when he returned from his last trip that riveted his attention on the area around his home in Albuquerque.

Sometime in either late November or early December of 1979, after returning from his last trip to the Dulce area, his wife told him of a strange incident. Early one morning, in the pre-dawn hours, their small dog had suddenly begun barking and growling. When his wife woke she heard a high-pitched buzzing sound that seemed to be coming from directly overhead, above their Albuquerque home. She could not account for it, and so she told Paul about it when he returned. Paul would later say that he asked a few questions and then dropped the subject, apparently not wanting to cause her any concern. He had not wanted to make an issue of it specifically because a strange thought had occurred to him. After his recent excursions near the Archuleta Mesa, was it possible that whoever or whatever he had been watching up there
was now watching him
?

By anyone’s account it was a stretch of the imagination. But to him, at that time, there was some cautious reasoning to it. What he did next was obvious. If (and it was a big if) “they” had followed him and somehow located his home, then there was every reason to keep an eye on the area near his home in Albuquerque. This chain of events is what led him to begin a nightly watch over the expansive area visible from his rooftop. As strange as the circumstance and logic was that brought him to that decision, it was a decision that forever changed his life.

The second floor of his house has a large observation deck that provides a considerable view. Moving ten feet higher to the flat rooftop deck gave him a far wider view extending 360-degrees. On some nights he would start after sundown and keep watch virtually all night, braving sub-freezing temperatures and strong winds. From his vantage point in the Four Hills community east of Albuquerque he had a clear view looking southeast across a grassy plain stretching toward the Manzano Weapons Storage Area (
Figure 3
). Whether events began to unfold on the first night or the second is unclear, but soon after he began his nightly watch something strange caught his eye. 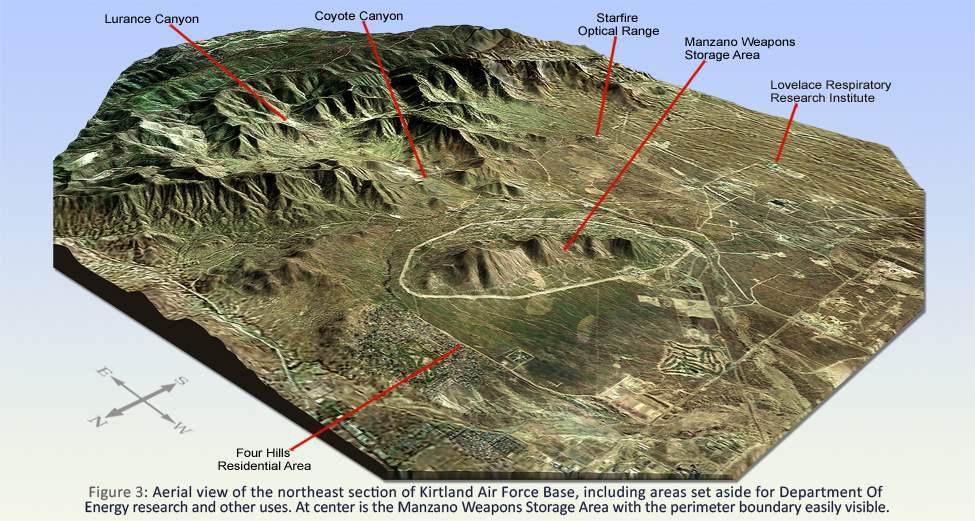 Shortly before midnight, as he looked southeast from his deck, his attention was drawn to strange pulses of light in the darkness towards the base of the weapons storage area. He had never seen anything like this before and so his attention was immediately focused on it. A few minutes later, four simultaneous pulses of light appeared, each lasting ten to twenty seconds before quickly fading away. From his roof he could only sit patiently and wait, but with binoculars in hand he watched intently as things happened.

When the pulses occurred it was clear that whatever he was seeing was on or very near the ground. Realizing he was seeing something very unusual, he called his wife to come out. It was now almost 12:30 a.m., and they would both end up watching for some time. At one point, the headlights of what they assumed to be a security patrol vehicle passed very close to where the strange glowing objects seemed to be. Neither Paul nor his wife could understand how a guard in a patrol vehicle could pass so close to the objects and not notice them. Eventually, unable to understand what these objects were and why they would be there, his wife went back into the house. This sequence, brightning for several seconds and then fading back into darkness, continued for some time as Paul watched and took note of where the objects were and their position in relation to each other. Four objects were visible—one of them considerably larger than the others.

Late into the night, after what must have been several hours, the sequence suddenly changed. After the objects had been dark for several minutes, there was a sudden intense flash that seemed to come from underneath one or more of the objects. This quick flash, a prelude to departure, would become an identifying part of the routine in the nights to come.

Seconds later, bluish halos formed around each object and instantly all four burst into brilliant balls of light and streaked into the air.Reaching an altitude he estimated to be 300 to 400 feet, the objects hovered for a moment and then quickly shot off to the south, disappearing from sight around the end of the mountains. The burst of light at the moment the vehicles left the ground was so intense that Paul would later write that he almost expected to hear an explosion come rolling across the desert plain…but there was no sound at all (
Figure 4
). 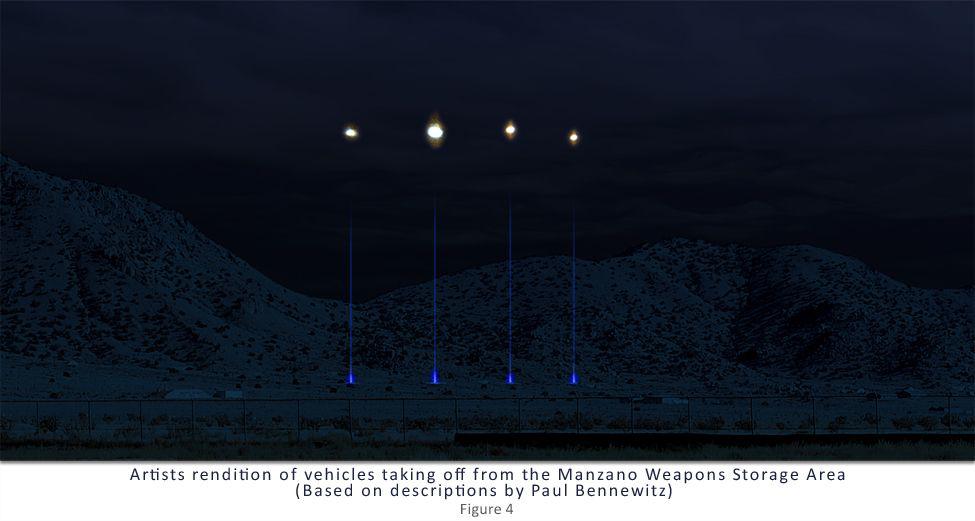 Based on everything I have seen and learned in the past three decades, the “high strangeness” of the vehicles Paul saw on those late nights—combined with the staggering evidence he got on film—is the cause of everything that was directed at him later by the Air Force (or whoever was actually behind the operation against him). On seeing the images from his films it was very clear that, contrary to what I had once heard, these were not simply “little lights”.

Paul was adamant that while the brightness of the vehicles might have obscured some of their shape, they were definitely saucers or elliptical vehicles, a shape easily visible in the frames from the film. Even more compelling, but rarely mentioned, was the fact that Paul was not the only witness. His wife also witnessed the vehicles on more than just that first night, though she may not have stayed out all night as Paul was driven to do. Eventually, catching on to the routine of pulses followed by a bright pre-launch flash, Paul was even able to tell her when to watch and what to expect.

They both saw them again several nights later. Once again the vehicles were already on or near the ground, but this time they each seemed to radiate faint light that made them easier to locate. Even so, distant headlights would occasionally go by in the weapons storage area as if whoever was driving was totally unaware that the mysterious vehicles were there. Finally, in the early hours of the morning and just minutes before the vehicles took off, the glow faded away to total darkness. When the sudden pre-launch flash appeared beneath the vehicles, Paul manned his 8mm movie camera and toldhis wife to be ready. A few minutes passed by before suddenly, as if on cue, all four objects burst into balls of light and leapt from the ground. Just as before, at approximately four hundred feet they leveled off, made a ninety-degree turn, and streaked off to the south. Paul also had an expensive Hasselblad camera that he used to take time-lapse photographs of the entire sequence. From his description of those still images, the vehicles were clearly visible over a wide area, lined up, and showing a distinctive glow (a glow he theorized must have been some type of force field.) (See
Figures 4
-
8
). 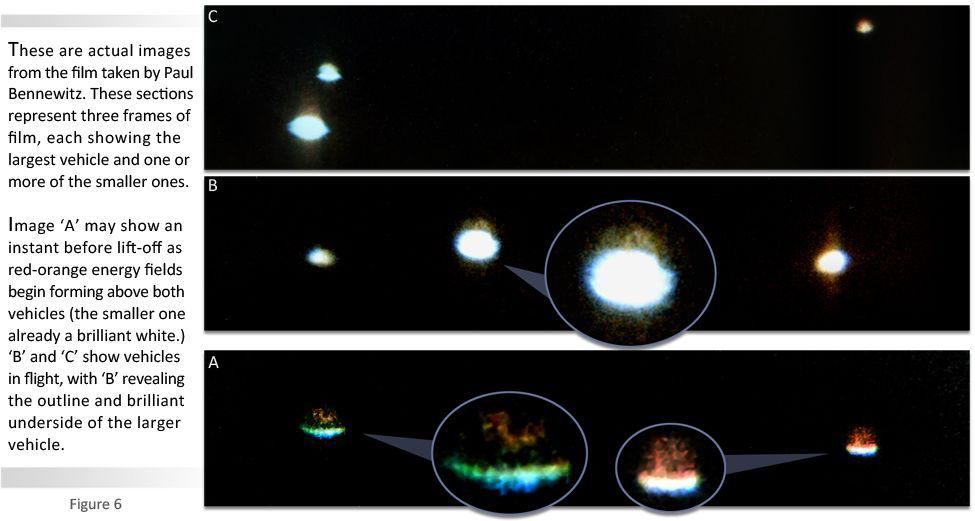 On the first few nights he had not seen the vehicles when they arrived. By the time he got out on his deck to begin watching, they were already there, down in the darkness at the foot of the weapons storage area. In order to catch them coming into the area, he decided to start observing earlier and stay for as long as it took. And so, the next night he began his watch just after 9:00 p.m., again from the upper rooftop deck of his home.

At close to 11:00 p.m. he saw a vehicle “burst from around the hill”. He only mentioned one vehicle in this instance, so it is possible that on that evening only one came in. As if on a preplanned flight path, it moved very quickly into the area with no hesitation at all. Then, reaching what again appeared to be a preplanned point, it immediately dropped straight down toward the ground and went dark.

The entire process took less than five seconds. Paul was adamant that the vehicle did not fly into the area and then maneuver toward a landing spot the way a helicopter would. The vehicle’s path and its maneuvers could only be interpreted as purposeful—getting into the area and getting the light out as quickly as possible. 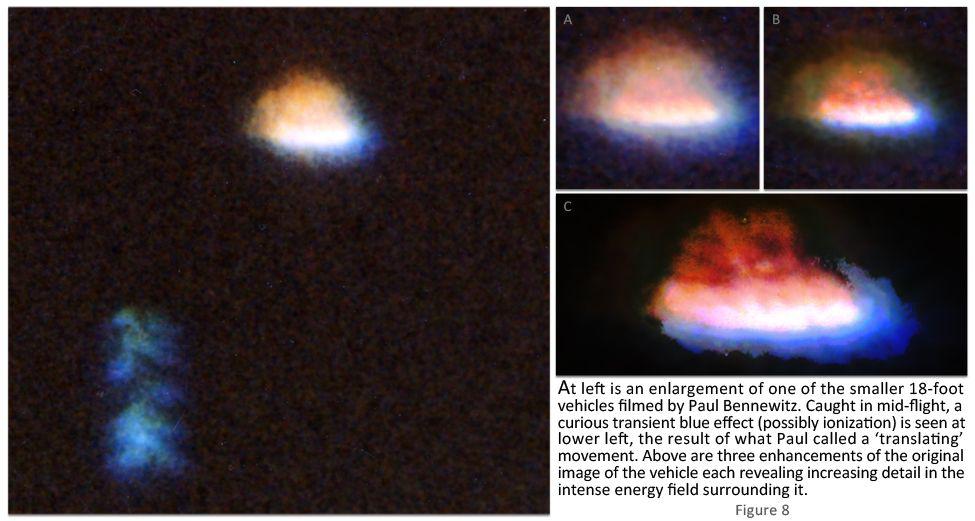 Several aspects of what Paul saw and filmed are extremely suggestive. What possible rationale could there be for the vehicles to be entering such a highly secured area? The Manzano Weapons Storage Area was one of the most sensitive military facilities in the nation at that time; surrounded by an electrified fence and patrolled by Air Force Security Police. Outside the fence, Sandia Security patrolled the grounds of the broader Kirtland Air Force Base/Sandia Military Reservation. Projects are conducted in this area by a number of military organizations and the Department of Energy. How could these vehicles not have been seen by any of the guards and other personnel that worked on the mountains or in the surrounding areas?

Paul speculated that the vehicles might have been able to divert light in a way that would render them invisible. It is difficult to imagine that as a workable concept considering that Paul himself saw the vehicles and was able to film them. Even if they could have remained invisible to anyone known to be present (though not to someone unexpected—like Paul), the requirement of knowing and accounting for every possible witness on the mountain ahead of time, and adjusting for every possible scenario, is almost beyond comprehension. If that had been possible, then what was the reason for: A) entering low and fast around the far end of the weapons storage area, and B) conducting operations on moonless nights at a time of year that virtually guaranteed working in ice cold temperatures (more on this in Chapter 15)?