Year of the King: An Actor's Diary and Sketchbook - Twentieth Anniversary Edition 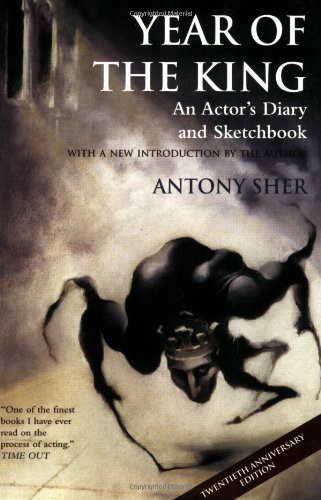 YEAR OF THE KING

For my parents and Jim

YEAR OF THE KING
An Actor's Diary
and Sketchbook

Fool, of thyself speak well. Fool, do not flatter.

Last Saturday night saw the final performance of Othello at the RSC's
Swan Theatre in Stratford, prior to its Japanese tour and London run.
To mark the occasion, my dresser Keith Lovell gave me a farewell gift:
a small framed photograph. I stared at it in astonishment. It showed
me twenty years earlier, backstage at the main house, in the middle of
a performance of Richard III. It must've been taken just before or after
the Coronation sequence which we invented for our production, since I
am wearing the vast red silk robe with the special clasp that allowed us
to reveal Richard's naked deformed back during the annointing ritual.
Mal Storry, who played Buckingham, is posing for the camera behind
me, and to one side is my then dresser, the foul-mouthed, good-hearted
Black Mac. Both Mal and Mac look rather deadpan, while I have a
strange sideways smile on my face.

What strikes me first is not how young I look - though this is fairly
alarming - but how relaxed. For the journey towards Richard III, told in
the pages of this book, was a difficult one, full of anxiety, self-doubt and
struggle. Back in 1984 it felt like my whole life depended on the attempt
to conquer this one great role. Yet the photo shows someone just larking
about in the wings. It looks like just another show, just another part.

And here I am now, in 2004, still working for the RSC - my love for
the company undimmed - and indeed playing another of Shakespeare's
villains, lago, a man so thoroughly disturbed and disturbing that he
makes Richard III look like the good guy. So what's changed? Everything. Twenty years might seem like a long time, but it doesn't feel long enough for some of the differences between the world I was describing
in Year of ' the King and the world now.

Most extraordinary is what's happened to my birthplace, South
Africa. At the time of writing the book, the system of apartheid seemed
immovable, and its brutalities knew no bounds. And yet now, in this very
month of this very year, South Africa is celebrating the tenth anniversary
of its first democratic elections. Democratic elections? In South Africa?
Ask the thirty-five-year-old in the photograph and he'd have told you it
was impossible, at least not without the streets running with blood. Yet
that didn't happen either. Instead a miracle did. A miracle that began
with one remarkable man walking out of prison to freedom.

On a personal front, much has happened too: as a gay man I've
come out publicly (in this book I'm afraid I'm still very coy about my
relationship with my then partner, Jim Hooper), and my father has died,
my funny, difficult Dad, and I've been knighted, and I was in a clinic for
cocaine dependency, and ... well, if the reader is interested, they could
look at Beside Myself, my autobiography. Year of the King was my first
book, but I've since published seven more, as well as a stage play, I.D.
Writing is now a serious rival to acting in my professional affections, and
I'd be hard pressed to say which occupies the place of first love.

Re-reading Year of the King I was surprised by my obsession with
Olivier's Richard III. At the time I genuinely thought there was such a
thing as a definitive performance of a Shakespeare role or play. Yet since
playing the role myself, I've seen two other Richard Ills that are certainly
as good as anyone might hope for: Ian McKellen's chillingly sour
Blackshirt at the National, and Simon Russell Beale's glorious poisoned
toad at the RSC. I now believe that a significant part of Shakespeare's
genius, and one of the reasons why his work has lasted four hundred
years, is that he constantly yields himself to re-interpretation. God
knows what he himself would make of our endless and busy explorations
of how to stage his plays. An all-female Shrew or an all-Yorkshire Antony
and Cleopatra, a circus Dream, the roles of Henry V and Henry VI played
by black actors, a Hamlet who vomits up his father's Ghost, or indeed a
Richard III on crutches ... would he be dismayed by these portrayals? I
hope not.

For me another big difference between 1984 and 2004, and one which
is vital to record here, lies in my approach to speaking Shakespeare's
language. There's a very significant diary entry on page 228 of Year of the King, dated Sunday 10 June, the weekend before we opened
the show: `Time to stop and think, which I don't really want to do.
Refuge in the Gielgud hook, The .-lges of Gu'Igud, only to come across
John Mortimer's lament on modern verse-speaking. I snap it shut as if
killing a bug.' The truth of the matter is that I was terrified of the verse,
ashamed of my inexperience with it, and nursing a secret fear that I was
trespassing anyway. Wasn't classical theatre the territory of handsome,
rich-voiced British giants like Gielgud and Olivier, and out of bounds for
little Cape Town nebbishes like me'

I now feel bold enough to answer that question with a resounding no.
Shakespeare belongs to us all.

Richard III was my first attempt at one of the great roles, and lago
is my latest. In between there's been Macbeth, I,eontes, Titus and
Shylock, as well as several other classical parts, like the eponymous
heroes of Tamburlaine the Great and The Ilalcontent, Caesar in The
Roman Actor, Vindice in The Revenger's Tragedy. In fact, I believe it's the
experience of playing Shakespeare's contemporaries that has made the
speaking of Shakespeare himself easier for me. The other writers don't
have Shakespeare's gift with the verse - despite all their strengths they
don't have, let's face it, his genius - and so they are much harder to speak.
After you've battled with, say, the monotonous thump of Marlowe's
mighty lines or Tourneur's awkward, twisting mouthfuls of words, you
come back to Shakespeare with such relief, such joy. Ile's done all the
work for you. All you have to do is breathe it in and speak it out; just
let it live in the air. This is, of course, easier said than done. But only
by doing it, by practising the skills, will you eventually learn to master
them. In the meantime the problem remains, and you can read about it
in this book. I think it's only right for me to confess here that the search
for a spectacular physical shape for Richard was partly to compensate
for my feeling of inadequacy with his language. You could say there was
something symbolic about the eventual use of crutches.

These days I believe that performing Shakespeare begins and ends
with the speaking of the verse, and no amount of physical bravura can
make up for it. The brains of his great characters are more interesting than
their bodies, and their brains are revealed in their manner of talking.
Sometimes I sense there's a public conception that all of his creations
talk the same way, and that the Collected itiorks simply represent a great
generalised wash of Shakespeare-speak. Far from it. I.contes's neurotic, fractured utterances, Macbeth's dangerously measured tone, lago's sick
sex-fuelled images, and the sheer energy and wit of Richard's speeches:
these are all very different from one another. And it's only by observing
the individual ways these men express their thoughts that you can really
get to their hearts.

My conversion to this new approach has been hugely helped by the
most important change in my life between 1984 and 2004, and that is
the relationship - seventeen-years-old next month - with my partner,
the director Greg Doran. Just recently, Greg has been enjoying a terrific
run of success with the RSC, conceiving and producing the Jacobethan
Season (for which he won the 2003 Olivier Award for Outstanding
Achievement), the double of The Taming of the Shrew and The Tamer
Tamed, All's Well with Judi Dench, and now Othello - and the press has
repeatedly hailed him as one of the best Shakespeare directors in the
country. Quite apart from all the other riches of our partnership, I feel
I've been remarkably lucky to share my life with someone who knows
and loves Shakespeare quite like he does, and who can communicate this
passion with such vitality.

Prey by Linda Howard
Murder at Midnight by Avi
Lyon on a Leash by Knowles, Erosa
Years of Victory 1802 - 1812 by Arthur Bryant
Wild Justice by Wilbur Smith
Brother of the More Famous Jack by Barbara Trapido
Might as Well Be Dead by Nero Wolfe
Kidnapped by the Billionaire by Jackie Ashenden
Otra lucha / El final de la lucha by José Mallorquí
El Libro de los Tres by Lloyd Alexander