Young and Revolting: The Continental Journals of Nick Twisp 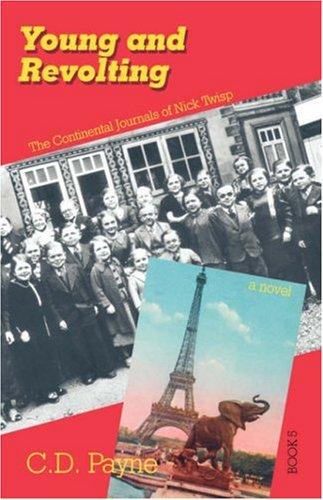 Presently, I’m rolling across Belgium with a counterfeit passport in my pocket, bulky wads of hundred dollar bills secreted about my person, and The Woman Who Is Expecting (Not Happily) My Child nestled at my side. Sheeni, of course, has claimed the window seat of our extravagantly posh bus, though she seems less than transfixed by the Belgium countryside. Can’t say I blame her. So far Europe looks like the American Midwest with zealously enforced anti-littering laws and extremely aggressive foreign car salesmen. Everyone on the road seems to be driving like a lunatic, including our chunky lady bus driver. If I weren’t in a state of near nervous collapse, I’m sure I would be experiencing no small measure of highway terror.

Not thinking too clearly, but I calculate I’ve been awake nearly 40 hours—ever since we left Yazoo City, Mississippi: hallowed venue of recent Twisp-Saunders nuptials. Took a bus to Atlanta, then hopped a plane to Brussels. Didn’t fly directly to Paris in case Sheeni’s dad had alerted French authorities. My astute wife reasons French customs will be less vigilant at obscure Belgium crossings. I hope so! Frightfully nervous at Brussels customs, but Sheeni got us through with magnificent charm in overdrive. No luggage search or inspection of intimate bodily cavities, thank God. No language barrier so far as Belgians mostly proficient in English. Can’t blame them as their own native tongue (Flemish? Martian?) sounds like complete gibberish.

Stomach is rumbling. Nothing but airline food since yesterday. Can’t remember when I had my last bowel movement. Fear I may not be cut out for world traveling. Sheeni fresh as a daisy. On plane, she tucked up her legs, curled against a tiny airline pillow, and slept like she was in her own virginal bed. Don’t see how she does it. After 10 minutes in that posture, my legs would be in a state of permanent crimp. After 20 minutes gangrene would be setting in. State of health not helped by two swarthy Belgians behind us smoking like chimneys. Can’t believe they permit smoking in such confined quarters. Just try lighting up on a bus in California. You’d be rocketing out a window in two seconds flat. One of them, I noticed, was wearing a Wart Watch. I hope it was our authorized Taiwanese model and not some cheap Chinese knockoff.

Road sign for French border: Only 10 km to go. My next entry, diary, may be written from a French jail cell.

8:50 p.m. We’re in Paris! Too tired to write much. Attracted intense interest of French customs officers. Scared shitless (I wish), but relieved to see object of their fascination was my surgically remodeled Belmondoesque physiognomy. Many queries in voluble French expertly parried by my charming wife. God knows what she told them. One even wanted my autograph for his aunt (apparently a big Jean-Paul Belmondo fan). Luckily, I remembered to sign it Rick S. Hunter, my latest pseudonym (I’ve had lots). Now gleaming inside each of our passports is an official full-page hologram that reads “3 month visa, one entry.” Sheeni is totally legal and I’m nearly so (visa is genuine; only passport is fake).

Our crazed Paris taxi driver was even more of a road menace than Belgian bus driver. Paris a blur of lights, honking horns, and screeching tires. At last reached our semi-decrepit two-star hotel, reserved miraculously by Sheeni via pay phone in Yazoo City. No trouble from fawning desk clerk, another Belmondo fan.

That reminds me: must get voltage converter for laptop. This stupid country has entirely different plugs.

Excited wife wants to go out and explore the town. No way, Jose. This guy is going to bed.

WEDNESDAY, May 12 — I spent the first 45 minutes this morning holed up in our tiny unventilated bathroom. All too obviously it had begun its life several centuries earlier as a closet. Not much had changed except for the introduction of a coffin-sized metal shower, micro sink, and peculiar Frenchified toilet.

When I emerged, treading lighter, My Love was seated on the windowsill and gazing out across the city. She wrinkled her nose. “What were you doing in there?”

“
Making a very special gift to the people of France. How’s the weather?”

I sat on the rumpled bed to put on my shoes. “Well, just remember, if it weren’t for me, darling, you’d still be solving algebra problems back in Ukiah.”

“
If it weren’t for you, Nick Twisp, I wouldn’t feel like throwing up right now.”

“
Hey, you were the guy who said let’s skip the condom.”

“
I wish I were a guy, Nickie. The only time they experience nausea is when they write out the paternity support checks. I can’t believe how unfair the human reproduction process is to females.”

She’s correct, of course. In the immortal words of Barbra Streisand having a baby is like shoving a piano through a transom. Thankfully, we males (mostly) dodge the whole messy business.

I strolled over, gave her a kiss, and looked out the window. Many genuinely antique stone buildings and in the distance a patch of shimmering aqua.

“
What’s that water feature?” I asked.

“
It’s the Seine, you twit. And over there are the spires of Notre- Dame.”

“
Do they have a football team too?”

“
Nickie, you are so retarded.”

7:25 p.m. I’m bushed. Must have walked 900 miles. God knows what the hour is in real American time. My head is buzzing; my eyes feel like French intellectuals have been using them for ashtrays. Sheeni, of course, is her usual indefatigable self. You’d think our hungry zygote would be slowing her down. My theory on sightseeing: if you’ve read all the guidebooks, why bother visiting the actual places? Hell, you already know what you’re going to see. As usual, Sheeni not persuaded by flawless Twispian logic. Has been boning up on the City of Light since Day One. Knows every significant landmark and its history back to 508 A.D. Intends to inspect each one THOROUGHLY. Dogs are barking angrily. Must acquire more comfortable shoes if crippling foot crisis to be averted. First stop after breakfast was hotel tourist kiosk for voltage converter and oversized sunglasses. Seems Jean-Paul Belmondo has a much higher profile in Europe than Ukiah, California. While masticating complimentary croissant in dank hotel dining room, accosted twice by eager film buffs. Both German-speaking so could only smile and nod as they chattered enthusiastically in unintelligible grunts. Sheeni no help as she exhibits the usual Francophilian contempt for German Culture.

Strolling the boulevards, felt like a glamorous celebrity behind dark glasses, though visually handicapped when stumbling through dim historic interiors. Viewed mucho masterpieces at the Louvre, including the Mona Lisa. Yeah, I’d have to rate it marginally more polished than the paint-by-number version my old Oakland pal Lefty attempted in the fourth grade. One drawback of Growing Up Fast: youthful Sheeni gets into French museums for free, while even more youthful Rick S. Hunter (whose passport identifies him as 18) has to stand in long lines to pay full-fare for the overpriced adult tickets.

All in all, I’d rate the Louvre a real eye-dazzler, but that silly glass pyramid in the courtyard has got to go. Very steamy when the sun hits it. Now I know how those ants felt that I used to fry with my magnifying glass when I was a kid. Also overdue for demolition: Pompidou Centre, a hideous eyesore across the piazza from an outdoor café where we ate dinner.

Sheeni claims Paris is the greatest creation of the human race: “The jewel of the Earth.” She makes a cogent case, but why for the past half-century have armies of builders been doing their best to uglify the place? Personally, I think those arrogant architects should be strung up by their thumbs and beaten soundly with their T- squares. Even Sheeni had to concede all those monstrous high-rises glimpsed in the distance are a blot on the landscape.

Twenty-four hours in romantic Paris and have not been laid once. Made blatant overtures toward lovely bride, but she insists on an evening café au lait first. Spending great wads of euros. Must find out current exchange rate. It appears they’re worth about 10 cents US. Thank God we came here with mighty American dollars.

THURSDAY, May 13 — Three times, diary. Twice last night and once again this morning. Yet despite all those prolonged feet soaks, blistered dogs are still snarling. Meanwhile, on the sex front, Sheeni continuing to rebuff my advances. Now says she is having her period, although it was my understanding that chicks who were preggers didn’t get those. She scoffed and said that was an old wives’ tale. I reminded her that we were here on our honeymoon and that guys brought certain expectations to these occasions. She replied that there was far too much to see and do in Paris to linger in bed with some 14-year-old sex maniac. “I’m nearly 15,” growled François Dillinger, my trigger-happy and lately sex-starved alter ego. We withdrew with our T.E. (Thunderous Erection) to the midget bathroom and dealt with it in a manner not covered by the Napoleonic Code.

Salesgirls not too complimentary either, if Sheeni translations to be believed. Protests ignored. Shoes a bargain: only E180. Additional footwear bonus: thick soles augment stature. Now nearly as tall as Sheeni’s erstwhile boyfriend Trent Preston. Wife so disgusted she bought two pairs for herself—considerably more expensive than mine and untouched by Rumanians.

Exiting with our purchases, I noticed a McDanolds right next door. François was jonesing for a burger, but Sheeni insisted on lunching at another authentic Parisian café—complete with unintelligible menu, snotty waiters, and lofty prices. Believe it or not, restaurants in France have the nerve to tack on a compulsory 15 percent tip. It’s no wonder the waiters treat you like dogs. This place had a busy lunch crowd puffing away madly on Gauloises and Marlboros. Helpful for American trade deficit, but hell on health-minded tourists. I ordered the excellent-looking grilled sausages, which turned out to have been made from parts of the animal normally discarded by civilized persons. At least the accompanying French fries and salad were edible. Sheeni said her mussels were “delicious in the extreme.” Leonine young waiter flirted outrageously throughout lunch with my wife. Wish I understood French. For all I know he may have been asking for her phone number. I had to sit there and seethe while he chatted her up. Then she made me leave the twit an additional tip. Talk about adding insult to injury. Later, she admitted that she was disappointed that he had detected she was an American.

“
It’s so distressing to discover one speaks French with an accent,” she lamented, as we strolled through the Luxembourg Gardens, which confusingly are not in Luxembourg but right in the middle of Paris.

“
Your French is superb,” I reassured her.

“
How would you know?” she demanded. “Let’s face it, Nick or Rick or whatever your name is, in this country your language skills rank at the sub-toddler level. I think you should acquire some French. And fast.”

“
Well, I’m not going back. And need I remind you that you are a fugitive from justice? Overstaying your visa is hardly going to make much of an additional dent in your criminal rap sheet.”

Damn. Stuck in a country where I can’t even converse with preschoolers. I didn’t dare tell her that I had already been tested scientifically and judged incapable of learning a second language.

11:35 p.m. Relaxing in hotel room in warm postcoital glow. Sipping mock champagne and nibbling bonbons. Sheeni, getting over period fast, decided to pretend she was realizing a girlish dream: losing her virginity to handsome Frenchman in sumptuous suite at Paris Ritz. Kept her eyes closed the whole time and whispered endearments in French to some Frog named Philippe. I didn’t mind.