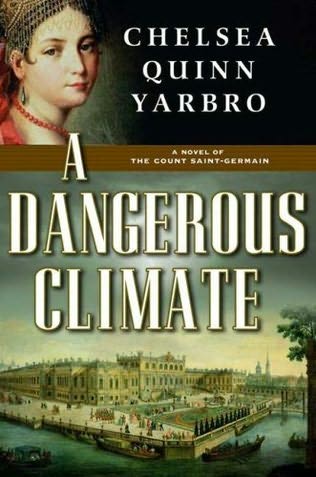 Tor(r) is a registered trademark of Tom Doherty Associates, LLC.

A dangerous climate : a novel of the Count Saint-Germain/ Chelsea Quinn Yarbro.--1st ed.

The Czar has chosen to build his new city in a dire place, for it is at the mouth of a river surrounded by broad, flat marshes that are icebound half the year and pestilential the other half ... all in all, a dangerous climate.

in the service of Peter the Great

Piotyr Alexeievich Romanov, known as the Great, ruled from 1689, when, at seventeen, he wrested power from his regent and half-sister Sophia, until his death in 1725, during which time he did his utmost to transform Russia from an Asian to European country, and to drag his empire out of the Dark Ages into the modern world of the eighteenth century. That he largely succeeded in accomplishing his goals not only marks him as a most atypical Czar, it also shows that he used all the power that being an autocrat bestowed upon him; this juxtaposition probably accounts for some of the startling contradictions in his character, which mixed grandiosity with modesty and courage with failure of nerve. Today he would probably be diagnosed as hyperactive, for he was always restless, his protuberant eyes moving constantly. Even as a child in the removed and indolent world of the
terem,
the women's quarters where children were raised, he was active; he much preferred his time in the country, where he organized his friends into a kind of semi-military, semi-courtly group, which later not only formed the heart of the Russian army, it also provided many of his closest advisors. Known as the
poteshnye
(meaning roughly those with whom one is entertained/has adventures), they were as crucial to Piotyr's achievements as any single factor in his life.

Unlike most Czars, once his reign began, he traveled outside of Russia extensively, and throughout his adult life rarely remained in one location for more than four months at a time. He disliked Moscow and its endless ceremony, a dislike he emphasized by founding a new capital on the Gulf of Finland at the mouth of the Neva River in May of 1703. He called it Sankt Piterburkh, using the Dutch name to emphasize his determination to Europeanize Russia. The initial conscription of 20,000 men from every part of Russia, Finland, Lithuania, Sweden--mostly prisoners-of-war--Poland, and Armenia
provided the labor force for the first year of city-making, a number that in time increased to 150,000, or as high a number as 200,000 by some estimates. Criminals were sent by the thousands to do the grueling work of draining the marshes and building first wooden and then stone embankments to shore up the banks of the Neva River, as well as to sink piles into the boggy soil to provide a foundation for the buildings to come. The first year, 1703--04, deaths among laborers were high: living in the open with bad water and poor food, occasional outbreaks of Swamp Fever (probably caused by giardia) as well as typhus, two epidemics of influenza, and a persistent form of what seemed to have been ringworm, to say nothing of accidents on the job and raids by outlaw gangs, soon reduced the number of laborers by as much as 15 percent. Yet the work went on, and more workers arrived to augment the forces already there. Within two years, more conscripted laborers were put to the task of planting trees and turning the wooden walkways into stone sidewalks and paved streets. Piotyr was determined to create a Baltic Amsterdam, another symbol of Russia's becoming part of Europe. During these first five years, Piotyr summoned many European diplomats as well as engineers and architects to Sankt Piterburkh; many interested governments sent residents and envoys to the new city in order to keep an eye on what was going on. As workers strove to put up houses and barracks to the Czar's order for accommodation of the newcomers, foreign residents came in ever-increasing numbers to the newly founded city. In conditions that resembled a survival camp in a construction zone, these foreigners were expected to carry on as if they were at court at Versailles or Berlin, making for difficult social conditions for everyone, though Piotyr saw it as a validation of his European ambitions for Russia.

As part of that Europeanization, he founded the Russian navy, reorganized the army, compelled Russian men to cut off their beards and wear European clothing, reformed marriage arrangements--he himself had had an unhappy first marriage to the very traditional, clingy stupid, but beautiful Evdoxia Lopukhina--and imposed January 1st rather than September 1st as the start of the year in order to be in closer accord with the European calendar, most of which would
have been impossible had he not been an absolute monarch. But that didn't mean he was all affability and progress; from time to time he succumbed to severe panic attacks, during which he would flee any perceived danger. In addition to these occasional outbursts of cowardice, he had a fearsome temper and in his rages was known to wreck whole houses. While in the throes of these episodes only his second wife, Ekaterina, could deal with him--everyone else was too terrified to approach him. She had been his mistress for many years before they married, a Livonian orphan named Martha or Marfa Skavronskaya, who took the name Ekaterina at her wedding and official conversion to the Russian Orthodox faith. Eventually Martha/Marfa/Ekaterina and Piotyr had twelve children, only two of whom--both daughters--survived beyond childhood.

Piotyr's life-long fascination with mechanics served him well, along with his thirst for learning all he could about what today would be called engineering. He earned certificates as a shipwright, a carpenter, and a gunnery officer, and not simply because he was Emperor Czar of Russia, but because he actually did the work, mostly in Holland and England during his European tour of 1697--98, at which time he often traveled incognito--or as incognito as a man standing six-foot-eight could manage. All his studying proved to be useful: at the founding of Sankt Piterburkh, he, with a small crew of woodcutters, built himself a four-room house in which he lived until his own, fairly modest permanent residence was built, reflecting his personal, unusually restrained taste in surroundings. He was generally impatient with ostentatious demonstration unless it was of his own devising; he was particularly fond of staging displays of fireworks, and he went in for days-long eating and drinking bouts with his friends, among whom he often contrived elaborate and blasphemous celebrations, which contributed to the belief held by the most religiously conservative Russians that he was in actuality the Anti-Christ, and the End of the World was near.

Dreary and inhospitable as Sankt Piterburkh was, the Foreign Quarter was one of the fastest-growing parts of the city for the first five years of its existence. After the first four years of predominantly diplomatic and harbor-building arrivals, Piotyr himself significantly
expanded the number of foreigners in his new city by hiring additional architects from Italy; teachers from Holland, Switzerland, and Austria; artists from France and Italy; anatomists from Holland, Switzerland, and Italy; city designers (civil engineers) from Scotland and Ireland; structural engineers from Scotland, Ireland, and Holland; shipbuilders from Holland, Denmark, and England; and musicians from all over. He also encouraged the foreign diplomats to bring accomplished men with them--at their own expense, of course--to help in creating Sankt Piterburkh. The rest of the city gained much of its Russian population from Piotyr's orders personally issued to merchants, artists, writers, artisans of all sorts, bankers, mercers, horticulturalists, builders, and others he deemed necessary to create the new city, compelling them to move to Sankt Piterburkh and to remain there until such time as he would release them. To refuse was tantamount to treason, and leaving the city could only be done by securing the written permission of the Czar.

During this time, the war between Russia and Sweden, known as the Great Northern War, continued, as well as periodic skirmishes with the Ottoman Empire and the southern territories of Russia. As a result, Piotyr spent a great deal of time with his troops on campaign, often staying only a month at a time in Sankt Piterburkh before heading off to another siege or battle. With so peripatetic a Czar, I have taken the liberty of placing him in his new city at times when he was not actually there; the same goes for his closest lieutenant, Alexander Menshikov, who served as a kind of coordinator for the various projects that were crucial to the development of Sankt Piterburkh. Martha/Marfa/Ekaterina spent much more time there in the early stage of the city's development than the Czar did, serving as a kind of pledge of Piotyr's continuing dedication to the city that bore his name--in Dutch.

Face Down under the Wych Elm by Kathy Lynn Emerson
Three Cups of Deceit: How Greg Mortenson, Humanitarian Hero, Lost His Way by Jon Krakauer
Labor of Love by Moira Weigel
Experimenting With Ed by Katie Allen
Omegasphere by Christopher John Chater
The Red Cross of Gold I:. The Knight of Death by Brendan Carroll
Z-Burbia 3: Estate Of The Dead by Bible, Jake
The Veiled Cage (Lady Lawyer Series Romantic Suspense Novels Book 1) by Johansen, Rita
The Silent Goddess: The Otherworld Series Book 1 by N.K. Vir
Seducing Helena by Ann Mayburn