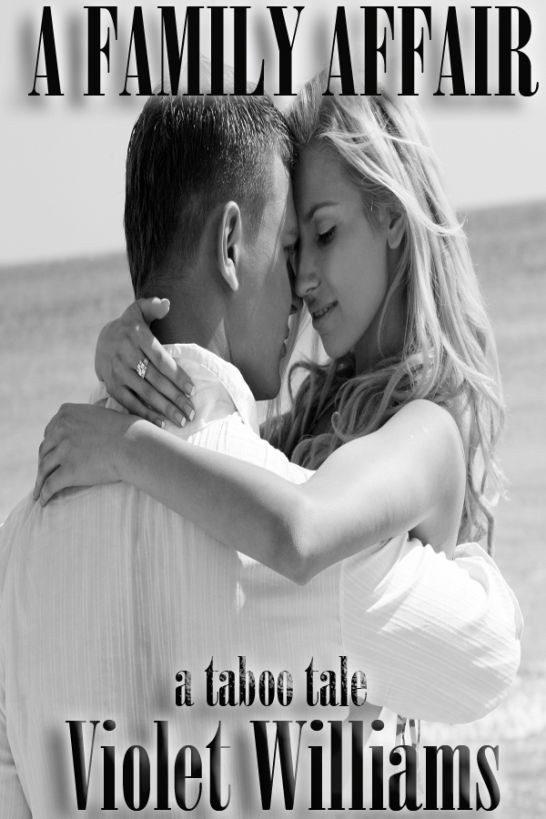 Published by Quiver Publishing at
Smashwords

When Davis Kensington found
out his forbidden trysts with his stepdaughter had devastating
consequences, he decides the best thing to do is to get away for
awhile. When his temptations follow him, he has to make a decision
that may have even worst repercussions.

Still reeling from her
tearful confession to her stepfather, Jessica Capshaw realizes that
she can't live without Davis and follows him to his sister's beach
house on the coast. But Davis' sister, Sara, ignites a passion in
Jess that's beautiful and sexy...and makes her question her
relationship with Davis.

Sara Kensington is hard at
work on a new novel when her brother shows up for some much needed
R&R. While she's surprised by the choices he made that led him
to her doorstep, she sees finds herself lusting after Jess as
well.

Sun, sand and hot nights
will bring all three together as they give into their taboo
desires…

This eBook is licensed for your personal
enjoyment only. This eBook may not be resold. If you would like to
share this book with another person, please purchase an additional
copy for each person you share it with. If you're reading this book
and did not purchase it, or it was not purchased for your use only,
then you should return to an online retailer and purchase your own
copy. Thank you for respecting the author's work. 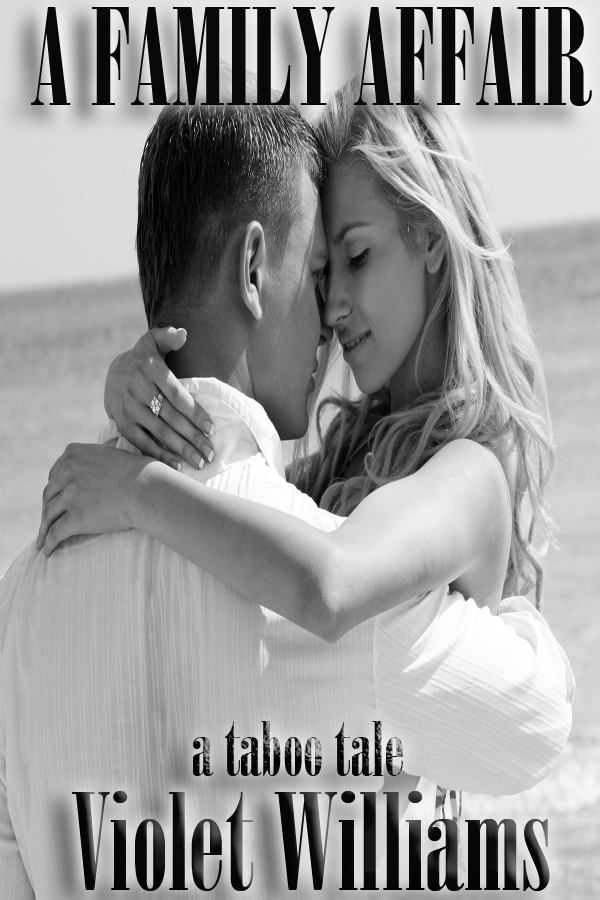 Chapter One:
Home Is Where the Guilt Is (Davis)

Chapter Four:
No Rest for the Wicked
(Davis)

Home Is Where the Guilt is (Davis)

Davis pushed through the doors of the study,
his heart racing. He went to the liquor cabinet immediately.
Usually he'd grab a chilled glass and a few cubes of ice, but
tonight, he didn't even bother with any of it.

With shaky hands, he removed the cap and
threw back the bottle. He winced as the alcohol went down like
liquid fire. After five shots at a dive across the street from
Creighton Memorial, he was surprised he still felt a thing at
all.

He took a deep breath before taking a second
swig. Then a third. He looked and saw there was only half a bottle
left. Bottoms up.

He sunk into the comfort of his leather chair
and shut his eyes.

This had to be a nightmare. But he pinched
himself and he didn't wake up with Jess's tight little ass pressed
against him. He didn't wake to a raging hard on that begged to be
plunged into her velvet folds, followed by her groggy moans as she
rocked her hips in time with his. There was no explosion as his
juices flowed into her welcoming cunt. There was only all-consuming
guilt and terror that no amount of booze, prayer, or wishful
thinking would undo.

"Pregnant," he said aloud, letting reality
creep back in. He'd gotten Jessica, his eighteen year old
stepdaughter, pregnant. His Jess. His perfection...knocked up.

He could still see her swollen eyes. He never
thought he'd use the word 'swollen' and 'Jess' and not be
describing his thick cock. But someone up there had one hell of a
sense of humor. A forbidden tryst came with its consequences.

He opened his eyes when a rapid knock shook
him from his pity party.

Jess stood in the doorway. She wore an
oversized Creighton t-shirt and a weary expression.

Davis shook his head. "If you've come to tell
me how horrible I am-"

"No," she interrupted, stepping forward.
Davis couldn't help but notice the way her breasts shook beneath
the shirt. He knew that if he brushed against her he'd feel her
buxom chest tight against it.

He gave his head another vigorous shake. That
right there--that consuming desire—that was what put him in this
predicament in the first place. Because he couldn't keep his hands
off her perfect body, he'd ruined both their lives.

Toshi had called his bluff when he showed
hesitation at coming out with his relationship with Jess. For a
moment, before the sky fell out, he'd entertained the idea.
Yeah--he'd be labeled as a 'dirty old man', but eventually people
might've warmed to the union. It rocked him to his core to even
think of the looks he'd receive from his co-workers, his friends,
when they found out Jess was pregnant.

Jess took his face in her soft hands. "I
didn't mean it, Davis. Any of it."

He wrenched his face away, blinking as he
felt the fuzzy warmth of the alcohol. "Right. So when you basically
called me a piece of shit that only cares about pussy, what did you
mean?"

She crossed her hands against her chest and a
shot of sadness echoed through Davis. A chest like hers wasn't
meant to be hidden--it was meant to be kissed, licked, and held
together while he slid his cock into its soft warmth.

He slid back, trying to create some distance.
"Just, uh, go get some rest. I need some time alone."

But Jess came closer. Her blonde hair was
like wet silk and he could smell her strawberry shampoo. He wanted
to pull her hair back with his fist as he burrowed his dick in her
pussy. He didn't want to feel or think.

"I need you Davis," she cooed, her voice
thick and warm in his ear.

He let out a tortured sigh as she pulled her
shirt over her head, revealing her luscious breasts, her peaks
already ripe and begging for his mouth.

"No," he said hoarsely, but his body screamed
yes as his cock snapped to attention, pressing uncomfortably
against his jeans.

He bit his lip and the spark of pain was
sobering and he snapped to his feet. His chair slammed into his
book cart, uppending a stack of folders.

"No," he repeated more firmly. "We're not
gonna do this Jess. You're preg-"

With an angry sweep of her arm, Jess
interrupted him and books, pens, and glasses clattered to the
floor.

"No!" she said adamantly. "We're not gonna
talk about it. All we're going to do is fuck. That's what we're
good at, that's what makes sense and it's the only thing that'll
make me feel whole again."

Her words were like a screech on a snow
covered mountain, and the desire building in his chest was the
avalanche that would consume them both.

"God damn it!" Jess said balling her fists.
Davis' mouth fell open as she slammed them down, open palm, on his
cleared desk. She curved her back, her tight ass dangling in the
air. It was so close.

"Fuck me!" she screamed, throwing her hair
down, her blonde strands spreading across the mahogany. "Please,
Davis. PLEASE."

Before he could talk himself out of it, he
went to her, crashing his rock hard cock into her oozing cunt. He
bathed his meat in her throbbing flesh. He let out a growl of
satisfaction as he felt her desire sinking into his pores, into his
very soul.

Jess was saying something, her fingers
digging into the wood, but her words were silent to him. As he
thrust his cock harder, deeper in her pussy, all he could hear was
the thunder of his own heart.

Jess was clawing like some wild, feral cat
but everything was hazy. There was nothing but the warmth, gripping
his cock and fitting him like a favorite pair of gloves. He knew
she could feel it too...she thrashed back and forth like something
possessed her, her body trembling and shaking like she was going to
explode.

When she screamed, "Stop!" at the top of her
lungs, it was like a razor across his throat, severing his carotid
artery and shocking him with the glory of death . But it wasn't his
neck that bled...when he staggered backward pulling his still erect
dick from Jess' pussy, he saw that blood was running in rivers down
her legs. He clutched the side of his desk as the room started to
spin out of control.

He swallowed and tried to focus. Jess was
sinking to the floor, sobs of horror racking her thin frame.

He realized with sickening surety what he'd
done. Lost in his need to just mindlessly fuck, he'd hurt her. He
sunk to his knees, his face crumbling. Jess hadn't been squirming
with unbridled pleasure and shrieking with delight...she'd been
trying to tell him to slow down, to take it easy.

Jess' eyes fluttered as she blinked into the
warm sunlight that filtered in from the open balcony.

She immediately glanced to her left, hoping
to see Davis' sleeping form beside her. She was alone.

A pang of disappointment flashed in her chest
as she rubbed her eyes and let out a yawn.

Could she really blame him? Last night was
insane. When she'd ripped her shirt off and hulked out, demanding
for him to fuck her, she'd imagined slow caresses as he rocked his
cock in her waiting pussy. After all, a few hours ago before she
told him the truth, he'd almost blurted that he loved her. How
could she have known that he was going to rip her pussy open as he
slammed her into the desk, oblivious to her pleas?

When he'd realized that she wasn't crying out
in ecstasy, he'd stopped immediately. She'd fallen apart--Davis was
supposed to be her salvation...the one person on earth that cared
about her.

He'd sobbed like an infant then threw up for
ten minutes straight and she'd realized that his disregard was
partly due to the alcohol. She'd lost count of how many times he
slurred how sorry he was and that he deserved to go to jail.

But Jess knew that he hadn't intended to hurt
her. It took a special kind of man to cry in front of a lover. She
knew he didn't have a hateful bone in his body and his actions
later that night proved it.

Still drunk as a skunk, he'd scooped her in
his arms and took her to the master bathroom. She'd barely been
able to stifle her giggles as he'd drawn a bath. Anyone else would
have tossed her a towel and left it to her to clean herself up.

But with nothing but love and guilt in his
olive eyes, he'd eased her into the clawfoot tub and washed her
head to toe with gentle strokes.

After she'd dried off, he'd taken her to his
bed and held her until she fell asleep in his arms.

But now he was gone, and Jess couldn't shake
a feeling that something had changed. It hung in the air…heavy and
sour. Something was wrong.

Jess threw off the covers and padded into the
hallway, ruffling her wild morning hair. "Davis?"