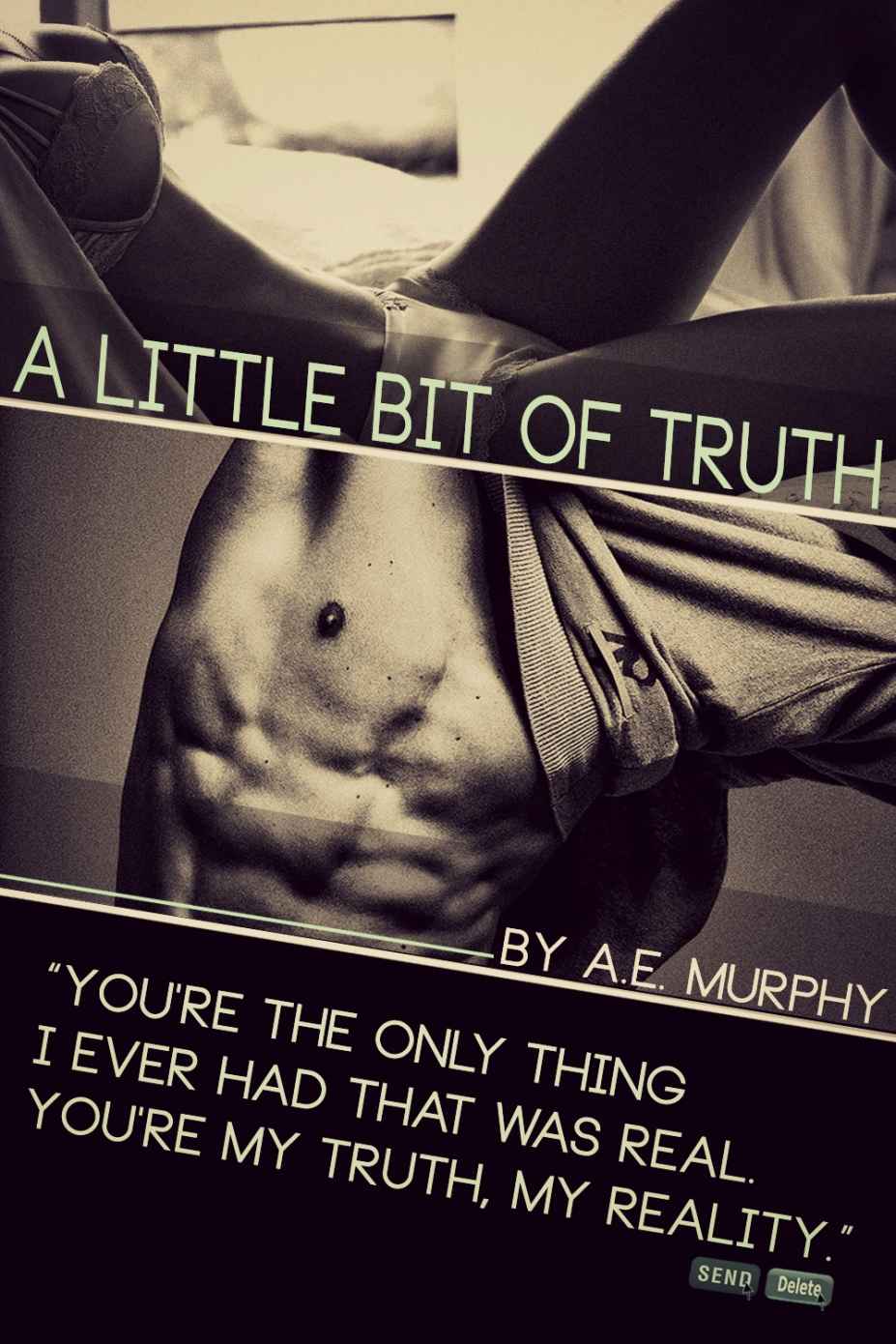 A Little Bit of Truth
By
A.
E. Murphy

The characters and events in this book are fictional. Any similarity to real persons, either living or dead, is purely coincidental and not intended by the author.

No part of this publication may be reproduced, stored, or transmitted in any form or by any means without the prior written permission of the author.

To my
Nanna Viv. I’m not sure what to say other than I love you, you rock, you’re completely awesome and I miss you. Thanks for everything you’ve done for me and the kids and thanks for believing in me. Also… happy birthday.

It has been a long and torturous time trying to write this book and make it perfect but I’d like to think I’ve picked up a few friends along the way.

At the beginning of this series I was lacking confidence and style, which soon changed because of the brilliance of a couple of strangers.

A fabulous woman called Laura contacted me and helped me grow as an auth
or, she has also helped me with my books and has asked for nothing in return. I’d like to think I’ve made a friend for life.

Most people don’t get that lucky. I got this lucky twice, because not only did I meet Laura but I also met an awesome woman called Helen, who just like Laura has helped me with my writing and has asked for nothing in return.

Helen, I love our conversations, you always have me in hysterics. Warranty Seal… I have that as my desktop background.

Laura, I’d like to think you created a monster. Wink, wink.

If it wasn’t for you two I don’t think my writing would have improved as much as it has and I know for a fact that I wouldn’t have enjoyed my days writing like I have.

I’m still not perfect and I never will be. Thanks for calling me out when I’m not.

The person who helped me with
A Little Bit of Truth is, Dawn Lings. Thank you so much for taking your time to help me and for also sticking with me as a reader throughout this series. I’ll be forever in your debt.

Thanks Mum for introducing me to Dawn. She rocks and so do you.

Luke Bailey, you continue to amaze me with your skills at creating book covers. You’re a very talented artist and I hope one day you get the recognition you deserve. If anyone needs a cover you need to go to him. He’s superb. Just check my Facebook friends for Luke Bailey.

A Little Bit of Truth

Pfft, I’m not nervous. Not even a little bit. Loryn on the other hand… I glance at her chewing her lower lip and shuffling from foot to foot by the entrance… yeah she’s nervous.

He’s late, he was supposed to be here five minutes ago. This is payback for the time I pushed him over, I just know it. I’m going to gut him like a fish if he’s another minute behind schedule.

“Sorry I’m late,” Jacob smiles his sexiest smile and winks at me as he steps inside through the back door. I can hear his fans screaming outside, I’m so glad I’m not him. It’s insane, you can barely get to the front door. “What’s wrong with you grumpy?”

“I’m not…” I begin to say but then I realize he’
s talking to Amelia, who is in fact grumpy and has been for the past five minutes or so. She’s cheered up now that her apparent future husband is here. Amelia is Lucas’ little girl, she’s five… I think. With gorgeous blonde locks and shocking green eyes that match her father’s and her uncle James’. I’ll just talk to myself then. “Yeah, I’m fine thanks for asking… and that welcoming hug you just gave me was fabulous darling. Oh really? You want to get me a drink? You want to know if I’m okay?” he looks over Amelia’s shoulder as he hugs her and quirks a brow at me. “No, that’s okay, I’ll get myself one.” And with a sexy sway to my hips I strut away with my chin up, my shoulders back and my hair fanning out behind me. Take that actor boy.

Maya winks at me as she deals with the few photographers by the door, Loryn is currently fussing over Lucas who is now in a wheelchair with his leg suspended in front of him
due to getting shot twice in his right hip. Long story short, Loryn’s cousin is a grade A douchebag with a serious drug and greed problem, she stirred up some shit and shot Lucas in the hip twice.

He mimes the word ‘slut’ as I walk passed so I flip him off and bump into James on my way into the small staff area.
James is Maya’s arranged husband who she now loves and adores, he’s also the father to Evelyn, who is… I think about eight months old but don’t quote me on that because I could be wrong and I daren’t ask because I am the kids godmother and it would look quite bad.

“Sorry,” we both say at the same time and step around one another. Finally, I see the refrigerator. Grape soda, hell yeah.
Glug, glug, glug.

“Chris?” I shout and a moment later he pops his head into the staff area. “Is my equipment set up and ready to go?” He gives me a thumbs up. “Go tell Loryn to get Jacob ready.” I hope you’re keeping up with all of these introductions, Chris is Summer’s husband, they’re both married and happy and have no kids yet. Summer is also Maya’s and my closest friend.

“I’m on it,” Chris salutes me and vanishes into the studio, I quickly prep Jacob’s clothes in the order that the shoots will go. Our first ever shoot in this building, and it’s of one of
the
most famous men in the entire world. Outside is crazy, a lot of his fans are sat there waiting for him to make an appearance.

“Nervous yet?” Lucas has wheeled himself in, taking care not to knock his foot. He has dark hair, green eyes, ridiculously good looking like his younger brother James who he was only reunited with just over a year ago after being separated from a young age. His story is a tragic one, not just the fact he got shot but the fact a few years ago he lost his wife and first born in a car accident. Sad right? But then he met Loryn and they are happy and in love, it doesn’t push Annie and Crystal (Lucas’ daughter and wife) into the background but it is nice to see Lucas happy even if he is in a wheelchair at present.

He smiles and reaches over to take my hand, “You’ll be fine.”

“Okay.
” I shake my arms out and jump up and down a few times to get my body nice and loose. “Jealous?”

“Of this?” he motions to the store.

I laugh once, “No, of the fact I can do this.” I jump a few more times while playing his head like a drum.

His
eyes narrow, “Will everyone stop stealing my lines?”

“JAMES!” I shout and he pops his head into the room. “You’re a bastard.”

“An adorable bastard,” he says with a mischievous smile before vanishing.

Lucas grumbles for a moment under his breath. “Sometimes I really don’t like you guys.”

“Preparing to do the shoot of a lifetime. Now go… shoo, scat.” I turn his chair and push him out of the room. Jacob better be ready soon.

Just another day at work. Loryn is hovering around me, brushing some kind of shimmering powder across my chest and abs, fortunately for me the large blinds are closed over the windows so nobody can see inside. Although the others, meaning, Maya, Summer, James, Chris, Lucas, Amelia and Sylvia don’t seem to understand the word, ‘
privacy.’
Evelyn doesn’t fall into this category because she’s not even one yet.

The only person who isn’t in sight is Marie. Damn that female and her wicked curves.

“Close your eyes,” Loryn says softly and smiles at me. I do so, she starts brushing something under my eyes and over the lids. “Perfect. Okay, go get changed.”

I sigh with relief and climb to my feet before padding through to the changing rooms. It’s hard to think that this place was the scene of a shooting only a few weeks ago. Remind me not to use the cubicle on the end, in case you’re wondering, that’s where a guy was shot. Shudder.

I pull on the khaki shorts and step out. To the left of the cubicles is another door, one leading to the studio. I open it and slip in, the room is completely dark save for a bright light shining over a white backdrop. In the center is a prop imitation of a tree stump.

Marie is currently fussing over her
large expensive looking camera which is pointing at the well-lit area. She hasn’t heard me come in yet and from here I have a perfect view of her toned ass in those tight jeans. Maybe I don’t want her to hear me just yet, the view is fucking great.

This has to be perfect, if I mess this up it will ruin us for life. If I get it perfect it could open
up more opportunities than we could even dream of.

“Where do you want me?
” warm breath tickles my ear and fingers dig into my hips. I gulp and shudder as sparks of pleasure shoot around my body before resting in the pit of my stomach. “How do you want me?” His nose skims my ear and my hands freeze on the camera. The mint on his breath makes my mouth water, I want to taste it.

Mentally slapping myself I point to the tree stump, it’s only a wood and plastic imitation but with my mad editing skills nobody will tell the difference. “Sit.”
As he steps around me his hand skims along the bare flesh of my lower back, his pinky finger dips under the seam of my jeans. Is it hot in here?

“Is this good?” He sits on the stump, I throw him a towel.

“Over your shoulder,” I command and look through the lens once more. My laptop is situated to the side, linked up to the camera and lights, waiting for my command. “Perfect.” And Jacob is, his dark blonde hair and his body… every inch of him is perfection. The way he moves he holds an air of confidence that I’ll never fully understand but will always appreciate. He’s always in control of himself, always in command and there’s just something so fucking sexy about that.

Fifteen minutes later I send him back through to Loryn, relieved to have his teasing eyes off me for more than five seconds.
He wants me, I know it, but he won’t touch me. I don’t blame him.

Chris rushes in to help me move the stump, he doesn’t say anything. He’s
always been a man of few words but he loves his wife Summer more than anything in the world. Summer who is my closest friend, has roped Chris into helping because Lucas is unfortunately unable to at the moment.

It’s another five minutes before Jacob returns, this tim
e in nothing but tight gray boxer briefs that make his golden skin glow. Fuck. I’m screwed… or I want to be. His skin is painted in a thin layer of oil and his hair tussled and sexy. Gulp.