A Murder on London Bridge 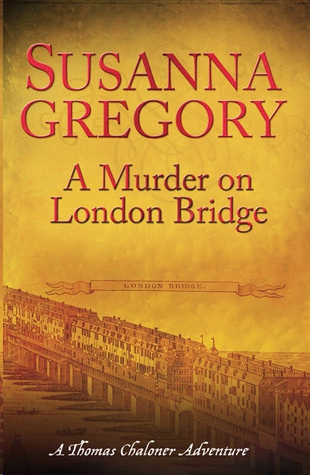 About the Author
Susanna Gregory was a police officer in Leeds before taking up an academic career. She conducted post-graduate studies at the University of Durham before earning a PhD at the University of Cambridge. She has spent seventeen field seasons in the polar regions, and has taught comparative anatomy and biological anthropology.
Aside from her two popular series of historical mysteries featuring Matthew Bartholomew and Thomas Chaloner, she has also written books on castles of Britain and cathedrals of the world. She now lives in Wales with her husband, who is also a writer, and the two have published another series of medieval mysteries under the pseudonym Simon Beaufort.
Also by Susanna Gregory
The Matthew Bartholomew Series
A Plague on Both Your Houses
An Unholy Alliance
A Bone of Contention
A Deadly Brew
A Wicked Deed
A Masterly Murder
An Order for Death
A Summer of Discontent
A Killer in Winter
The Hand of Justice
The Mark of a Murderer
The Tarnished Chalice
To Kill or Cure
The Devil’s Disciples
A Vein of Deceit
The Killer of Pilgrims
The Thomas Chaloner Series
A Conspiracy of Violence
Blood on the Strand
The Butcher of Smithfield
The Westminster Poisoner
Published by Hachette Digital 2010
Copyright © 2009 Susanna Gregory
The moral right of the author has been asserted.
All characters and events in this publication, other than those clearly in the public domain, are fictitious and any resemblance to real persons, living or dead, is purely coincidental.
All rights reserved. No part of this publication may be reproduced, stored in a retrieval system, or transmitted, in any form or by any means, without the prior permission in writing of the publisher, nor be otherwise circulated in any form of binding or cover other than that in which it is published and without a similar condition including this condition being imposed on the subsequent purchaser.
A CIP catalogue record for this book is available from the British Library.
eBook ISBN 978-0-7481-2456-5
This ebook produced by
Palimpsest Book Production Limited,
Falkirk, Stirlingshire
Hachette Digital
An imprint of
Little, Brown Book Group
100 Victoria Embankment
London EC4Y 0DY
An Hachette Livre UK Company
www.hachettelivre.co.uk
For Captain Dick Taylor

Dark Journey Home by Shaw, Cherie
Serious Ink by Ranae Rose
The message of the Sphinx: a quest for the hidden legacy of mankind by Graham Hancock; Robert Bauval
The Authorized Ender Companion by Black, Jake
2020: Emergency Exit by Hayes, Ever N
Gutter by K'wan
The Murder of Princess Diana by Noel Botham
Fangs Out by David Freed
Emily Greenwood by A Little Night Mischief
Ruthless by Sara Shepard