Jose didn't bother keeping his voice down as he replied.  "They're the guys in here on temporary duty for combat training.  They've been flying practice sorties for a week and this is their first coordinated exercise.  They're all fired up.  We're on the aggressor side of the room.  In other words, we're targets.  These aggressor guys do this kind of thing every week, so it's no big deal.  Specifically, in our case we are a non-maneuvering target simulating a Sukhoi SU-25.  That's a tough ground attack aircraft kind of like our A-10.  We are going to cruise an assigned track at mach point seven and wait to get shot down."

Jose saw something flash in Rae's eyes.  She identified her feelings when she said, "We can't maneuver at all?"

"When we get into the antiaircraft ring, the place around the target where ground based missiles and anti-aircraft guns would engage us, then we can maneuver a thousand feet per minute in altitude and twenty degrees each side of the assigned course.  During an air-to-air intercept we can only maneuver to avoid a clear collision.  Them's the rules."

Jose pointed to the front rows on their side of the auditorium.  "Those guys are from the permanent aggressor squadron.  They fly F-5s, some Russian airplanes, and some other Navy airplanes to mix things up.  They do the air to air dog fighting and they are very good at it."

"An F-5 sitting on the Nellis ramp and not contributing to the local mission tends to piss off the local folks.  We might find ourselves tail end Charlie for maintenance and parts.  So, I volunteer to be a target during Red Flag combat exercises.  This way I get flying hours and our bird gets a good spot in line for maintenance."

Jose cut short as the room was called to attention for the entry of the brigadier general directing the exercise.  The briefing took more than an hour and there was a lot of emphasis on safety.  On the way out, Jose stood in a line to pick up a fat envelope with his aircraft tail number on it.  Rae said, "I see somebody I went to flight school with.  I'll be back in a minute."   Jose turned to watch her walk away, as did a dozen pilots around him.  Female fighter pilots were becoming common in this group, but there was something about the powder blue flight suit and the way it fit that attracted attention.

When Rae returned she was followed by a man about her size in a grey flight suit. "Jose," Rae said, "this is Jack Scott. "

"Major, pleased to meet you."  Scott's handshake wasn't a bone cruncher.  He seemed pleasant.  He accent was almost Irish. A quick scan of Scott's flight suit told Jose that Scott was an Australian Flight Lieutenant, a senior pilot, and that he flew Australian's new F/A-18F Super Hornet.   The Super Hornet was larger and much more capable than the US Navy's original F/A-18 and Jose knew that Australia planned to be operational with the aircraft in 2010.

"Do you have Super Hornets here?"  Was the first question out of Jose's mouth.  He nodded toward the patch on the right side of Scott's chest.

Rae gave a little smile.  She had two men she was interested in right in front of her and all they could talk about was an airplane.  The two men continued the discussion about the Super Hornet as they followed the crowd moving toward the mission planning room.

As they reached the door, Jack finally turned to Rae and said, "So you're in Vegas now, Darlin?  Can I show you the town?"

Rae winced at the "Darlin", but said, "Sure."  She took Jack's hand in her left hand, pulled a pen from a pocket on her left sleeve, and wrote a number in his palm.  "Now," she said, "Don't do anything with that hand that would make you lose the number."

Jack laughed, gave her a hug, and said, "I'll be calling.  You can be sure of that."  Then, he went off toward a small group of men in grey flight suits.

The mission planning room was like a large cafeteria with open tables and computer terminals scattered around the room.  Jose and Rae found a spot in the busy room to look over their route of flight for the exercise.  Pulling open the envelope and laying charts on the table, Jose said, "We follow this north departure corridor at fourteen thousand feet mean sea level and go a hundred miles out.  At point Bravo we dogleg to the east for twenty miles and then at point Charlie we drop to eight hundred feet above ground level and cut a straight line south west for the attack run.  There are hills and ridges in a couple of places on the attack run and I'll be flying this by hand, so we need to be alert all the way.  Then, we do it all again.  At the end of the second attack leg we enter the pattern for landing.  Total flight time should be about an hour and fifteen minutes.  In theory, the exercise team has already loaded this track into our bird's GPS.  But, if the route's not in there right or if the GPS takes a hike, then we need some old-fashioned navigation points. "

Rae and Jose plotted bearings from various navigation aids and made notes on landmarks.  They computed time hacks for each leg and converted the desired mach number into what should be the indicated airspeed considering the anticipated temperature and air pressure.  They each had a chart full of notes and they double-checked each other looking for errors or transpositions in the entries.

The next stop was the personal equipment shop so Rae could get her oxygen mask re-certified by the Air Force.  She also had to have one of the sergeants at the desk record her certificates of pressure chamber and emergency egress training.  They each used the bathroom and then loaded fresh cold water bottles into their survival vests.  They joined other crews in a van headed to the flight line.  In the van, they reviewed the voice procedures they would use to call out traffic and landmarks. 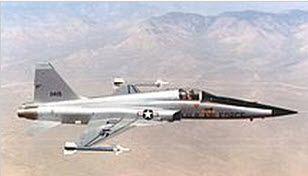 They arrived at Jose's "White Jet" just about an hour before their take off time.  They both did a walk around and Jose checked the maintenance log.  From a distance, Jose's white jet looked almost identical to the Air Force and NASA T-38s that Rae had flown, but there were many differences in the wings, the engines, and especially in the twin cannons, now unloaded and inert, peeking out from under the nose.  For Red Flag, the F-5 had simulated blue missiles on the wings containing tracking transmitters for the Red Flag Measurement and Debriefing System.

Because they were part of the exercise, even the time that a maintenance truck arrived with the correct type of boarding ladder was choreographed.  They were both strapped in and ready to start fifteen minutes early.  Since the aircraft was connected to a ground cart, they had power and could double-check the GPS and TACAN navigational aids.

"Because this is an F-5," Jose said, "it's a tad bigger and the engines are more powerful than the T-38.  But without the radar and fire control systems it's pretty simple.  Don't let it stall, don't let it spin, keep the fuel balanced, and we'll get home in time for cocktails."

"Yeah, but this thing is our own little hybrid.  There are probably some things about its handling without the radar in the nose that we don't know.  So we stay well within the envelope."

"Got that," Rae replied.

When the ground crew fired up the "Huffer" cart to feed pressurized air into the engine start manifold, Rae read off the startup checklist.

After engine start and check, they taxied out to the departure area without exchanging any words.  At the final checkpoint maintenance technicians gave the airplane one more look.  Then Rae read aloud the pre-takeoff checklist.  It went quickly.

"Nellis, Sneaky two one ready for takeoff," Jose said.  He was watching a flight of two F-16s take off while looking for other aircraft traffic in every direction.

"Sneaky two one, position and hold," the tower said.

Jose took the airplane out to the runway and pointed it down the centerline.  After about sixty seconds he heard, "Sneaky two one, cleared for takeoff and right turn."

"Two one rolling," was his reply as he pushed the two throttles forward.

Rae counted off the distance markers on the runway and airspeed at twenty-knot intervals.  They reached rotation speed at just the point on the runway where they computed it; about five seconds after the four thousand foot runway marker passed the cockpit.

Jose held the climb at five thousand feet per minute in order to conserve fuel.  When he reached his altitude he trimmed the airplane with a few stabs of the buttons on the stick and said, "Rae, you have the controls.'

"I have the controls," Rae parroted professionally.

All she had to do was hold altitude, stay on course, and be ready for the turn to the east, but Jose thought she did a fine job.  She put the aircraft's curving track right through point alpha and then quickly hit bravo in another right turn.  Her only comment was, "This thing has a lot more thrust than a T-38."

Jose took back the controls, brought back the power, and descended until they were eight hundred feet over the desert floor.  "Multiple aircraft across the horizon from ten o'clock to two o'clock," Rae said.  She twisted in her seat, "Dust trails behind us at five o'clock."  After a few seconds she said, "Five o'clock tracks are closing."

"This is the hard part."  Jose said.  We just have to sit here and take it.  "Our radar alert warning receiver isn't supposed to be maintained, so I just leave it off.  I can't stand the sound of being spiked."

"Spiked?" she asked as she kept twisting in her seat.

"Locked up by some other guy’s fire control system," he replied.

"That would make me mad," she said.  "Gimme a little jink so I can look behind."  Jose moved the nose about five degrees to the right and Rae said, "Two fighters at six o'clock about five miles and closing fast.  Two more at five o'clock right behind them."  She turned back to the front.  "Traffic at two o'clock."

Jose had been watching the dot that was another aircraft on the right side of his windscreen.  The dot wasn't moving in relationship to his airplane, so they were on a collision course.  "Two o'clock traffic has been slowing.  Looks like we're converging."

"Being overtaken high on the left and right." Rae said.  Just then, two F-16s passed overhead on the left and about two heartbeats later another flight of two went by on their right.  Both flights pulled up into the sun.  Then, off their right side they saw the aircraft that had slowed and that they were overtaking.  It had the unique twin tails of the F/A-18.  Dull smoke was trailing from the right engine.

Because they were flying a pre-set track, their radio was tuned to a range common control frequency that was relatively quiet.  The defenders and active aggressors were on different frequencies. Jose made a quick call to range control to report an A/F-18 at their position with one engine out.

"Sneaky two one, what state?" was the quick reply.  Jose and Rae knew they were being asked about their fuel state.  "Four thousand" Jose said.  He had at least six hundred gallons or just a little over four thousand pounds of fuel left onboard.

"Two one squawking and going two two five point nine. After a moment to change the radio dials, he said, "Sneaky two one" on the new frequency.