Adventures of a Cat-Whiskered Girl

I
LLUSTRATIONS BY
C
ALEF
B
ROWN

The text of this book is set in Apollo MT.
The illustrations were created in brush and ink.

Pinkwater, Daniel Manus, 1941â
Adventures of a cat-whiskered girl / by Daniel Pinkwater.
p. cm.
Summary: Big Audrey, who has cat-like whiskers, and her telepathic friend, Molly,
set out on a journey to find out why flying saucers are landing behind the old stone
barn in Poughkeepsie, New York, and, more importantly, to determine whether
another cat-whiskered girl really exists.
ISBN 978-0-547-22324-7
[1. Extraterrestrial beingsâFiction. 2. CatsâFiction. 3. Science fiction. 4. Humorous
stories.] I. Title.
PZ7.P6335Ad 2010
[Fic]âdc22
2009049704

34. With the Trolls Before Breakfast
[>] 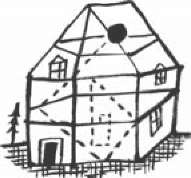 It surprises me how many people don't know there are different planes of existence. Well, it's not really surprising that you don't know if no one ever explained it to you, so I will do that now. Imagine that you live in a house that is all on one level: no upstairs, no downstairs, no attic, no basement, no crawlspace underneath. You live there, and you go in and out, and everything seems normal. Now imagine that it is really a three-story house, and you live on the second floor, with people living above you and below you ... but you never know it! You never see the people living above and below, you never hear them, you don't know anything about themâand they don't know anything about you. There are three families living in the same place, at the same time, and each family thinks they are the only one.

It's like that, only it's not houses, it's whole worlds. And there is one other thing to imagine. Imagine the three floors of the imaginary house all squashed together, so it's only one story again, but the people
still
have no idea they are not alone. This part is tricky to imagine. Let's say you are in your bedroom, listening to music, lying on your bed, and bouncing a rubber ball off the ceiling. At the same time, in the same space as
your bedroom, someone you can't see or hear is giving the dog a bath, and someone else you can't see or hear (and the dog-bather can't see or hear) is preparing vegetable soup.

It gets more complicated. While you are bouncing a ball off the ceiling, and someone else is bathing the dog, and someone else is making soup, a highway with traffic is running right through your bedroom, or there is a herd of buffalo wandering around, or there's a river with water and fish in it. All at once, and all at the same time. But if you are in any of the worlds all going on at once, it looks and feels to you like there is only one.

Now imagine this: sometimes it is possible to go from one world to another. It's really rare, but it does happen. There you are bouncing a ball off the ceiling, and next thing you know you are in the middle of a herd of buffalo. Or, if you were to catch a momentary glimpse of someone from another plane of existence, you'd probably mistake them for a ghost. I know about all thisâI myself came from another plane of existence to this one.

A skeptical person might think I was making all this up, or that I was crazy if I believed it myself. Of course, anyone can say she comes from another plane, or planet, or that her mother is the queen of Cockadoodle
(which is not a real place, as far as I know). Well, it's true that I can't absolutely prove I come from another plane. However, if you go to the library and get ahold of encyclopedias and
National Geographies
and certain books, you can find an article with pictures of a typical-looking Inuit, a typical-looking Northern European, a typical-looking Mongolian, a typical-looking Bantu, Korean, Australian, Moroccan, and so on ... all different types. All different in minor ways, and all similar in most ways. It is interesting. What you will not find is a picture of a girl with cat whiskers and sort of catlike eyes. That is, until they take a picture of me.

ii. Where I'm From and Where I Was 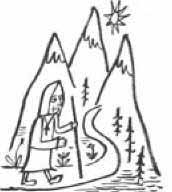 Since practically nobody even suspects there are other planes of existence, there would be no reason to name the one you live on. Besides, if the one I came from had a name, nobody on this one would have ever heard of it. I lived in a city, an ordinary city, with my uncle, Uncle Father Palabra. He's a retired monk and a professor of mountain-climbing. I don't remember my parents very wellâthey went away a long time ago. I liked living with my uncle, and I was reasonably
happy, but for some reason I developed a strong desire to travel to other places and see things. I met three kids, Yggdrasil, Neddie, and Seamus, who had managed to get off their plane and onto mine. We got to be friends, and when they went home, I went with them. My name is Big Audrey.

Yggdrasil (or Iggy), Neddie, and Seamus live in a city called Los Angeles. I stayed with them for a long time, and I even got a job in an all-night doughnut shop. Doughnuts are not unknown where I come from, but they are not used as food. I had fun working in the doughnut shop, and got to observe the many varieties of life-forms that came there, especially late at night.

iii. Where I Went 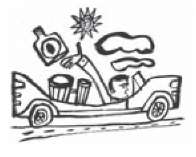 I went to Poughkeepsie, New York. I said goodbye to my friends Iggy and Neddie and Seamus, and also to Crazy Wig. Crazy Wig is a friend of theirs. He is a shaman, which means he can see visions and knows things of a mysterious nature. The first time I met Crazy Wig, he grabbed my head with both hands, closed his eyes, and made odd sorts of singing noises while continuing
to hold my head. Then he said, "Daughter, your destiny is not here. You must travel. You must go on a quest. You must go ... the vision doesn't say where, but you have to go there."

A couple weeks later, Crazy Wig arranged for me to go as a passenger with this movie actor he knew, a guy by the name of Marlon Brando, who was driving his car to New York, which is all the way on the other side of the continent. I had been thinking I should see more of this plane of existence than just Los Angeles anyway, so I quit my job at the Rolling Doughnut, threw my few belongings into a bag, and took off with Marlon in his big convertible.

Marlon was extremely handsome, and crazier than a bat. He talked incessantly about health food and played bongo drums while driving. He drove fast, and we went nonstop. Marlon had plenty of fruit, wheat germ, and bean curd in the trunk (and also a dozen large chocolate cakes, which did not seem like health food to me), so we never stopped at restaurantsâjust to gas up the car. When he got tired, he'd pull over, eat about half a chocolate cake, wash it down with carrot juice, crawl into the back seat, and sleep for a couple of hours. I'd curl up on the front seat with my coat over me. I made it almost all the way to New York City with him, but about the time we reached
Poughkeepsie, I'd had all I could stand and told him I'd be staying there awhile. Marlon gave me a bottle of papaya juice, wished me the best of luck, and bongoed off in a cloud of dust. He was a nice guy, but he got on my nerves.