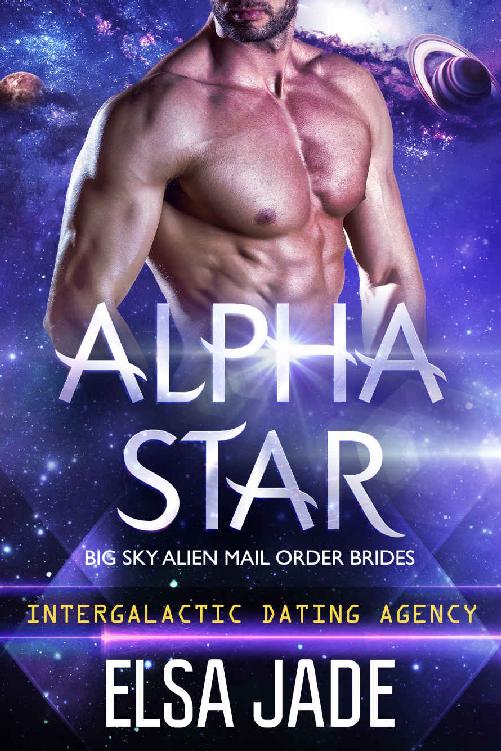 He will be lord of his own solar system, but he can’t claim the homeworld until he takes a bride. He needs the right mate to win his mating rings, but choosing one female from among the neighboring systems while slighting the others could start an interstellar incident—and this ex-mercenary starship captain has finally had enough of war. Where in the universe can a runaway cyborg prince find a naïve female willing to risk her life on the dangerous frontiers of space?

And sign up for the
Elsa Jade New Release Alert
for release updates & sales!

Looking for love in all the wrong galaxies

Welcome to the Intergalactic Dating Agency

See all the stories from the
INTERGALACTIC DATING AGENCY

This book is a work of fiction. Names, characters, places, and incidents are the product of the author’s imagination or are used fictitiously and are not to be construed as factual. Any resemblance to actual events, locales, or persons, living or dead, is entirely coincidental.

All rights reserved under International and Pan-American Copyright Conventions. Except as permitted under the U.S. Copyright Act of 1976, no part of this publication may be scanned, reproduced, distributed, or transmitted in any form or by any means, or stored in a database or retrieval system, without the prior written permission of the author.

Zoe Nazario flipped the sign of Mr. Evens’ Odds & Ends Shop to
CLOSED.
Stepping out onto Main Street, she blinked in the fading light. Though working at the antique/thrift/pawn shop didn’t usually keep her so late, the boss had dumped a dozen estate sale boxes on her right before the end of the day.

But it wasn’t like she had anything else to do.

After losing herself in the dusty and musty “treasures” of a long, eventful life—one that apparently involved a ton of mildly risqué commemorative shot glasses?—the hush of the small-town street was almost jarring. The sun had already fallen behind the low mountains, taking the warm afternoon temperatures with it, but the street lamps hadn’t clicked on yet. To her gritty eyes, the creeping shadows seemed to hold more ghosts than the old boxes.

Wariness oozed up like storm scum seeping from an open sewer, and her breath caught in her throat. She rolled forward to the balls of her sneakers, swiveling her head a hard one-eighty and back again as she scanned the sidewalk with its row of old-timey, two-story façade storefronts.

She thumped onto her heels. Of course there was nothing. She wasn’t back
there
anymore. This was pretty, pleasant, peaceful Sunset Falls, Montana, USA. She let out one shaky breath and replaced it with the chilly wisp of the wind coming down from the hills. Tilting her head, she stared up, gulping air until the hint of panic receded.

This was Big Sky Country, just like the glossy brochures had promised. So big she’d have a perfect view of the incoming missile that would obliterate any good she’d done, exploding in a cloud of brick dust and blood… Dammit,
no
. No careless warlords were raging across Montana. No one was aiming at the ‘naively enthusiastic relief worker’ crosshairs on her back. She was all better now. Well, getting better.

Her post-surgery hair had finally grown out enough to lie down—as down as it would go without a flat iron—but the little wisps at her nape prickled as she hurried home through the gathering darkness. She turned down a narrower lane leading away from the Main Street shops to the grid of tidy old clapboard cottages. Just ahead, a white picket fence marked the small house she shared. Rent was cheap with two great roommates, even if Delaney left too early with her fly fishing clients and Tisha came home too late from tending bar at the Sunset Saloon.

Just as Zoe let out a puff of relieved breath at the sight of her safe haven, the toe of her sneaker smacked something hard. It skittered down the sidewalk ahead of her.

Jerking to a halt, she bent down to squint at the thing she’d accidentally kicked. It glinted at her—the exterior too shiny to be trash—when the bulb in the solar-powered lamppost light finally flickered to life. It looked like a small, chrome Rubik’s cube, faceted in a grid. She glanced both ways down the sidewalk again but didn’t see anyone who might’ve dropped it. Well, she’d just put it in the lost and found at the coffee shop tomorrow. Everyone in Sunset Falls ended up at the Twinkle, Twinkle Roasting House eventually.

She picked up the cube, and it vibrated in her hand. Startled by the buzz, she almost dropped it. When her fingers sprang open, a pale purple light beamed from the top facet. The beam coalesced into a small circle hovering above her palm.

“
Greetings, lonely lady of Earth. We are so pleased you have chosen Big Sky Alien Mail Order Brides
—”

The chirpy voice was too loud in the residential quiet, and Zoe clamped her fingers reflexively around the smooth-edged cube. The lavender light cut out, along with the voice.

What the… She peered at her own hand as if it belonged to someone else.
Lonely lady of Earth?
How weird. She frowned and took another suspicious look over both shoulders, straining her tired eyes. If someone was pranking her… But there wasn’t anyone else around.

What was that second part? Something about brides. Maybe the little box was a promotion for the private resort up the mountain. Although it seemed high tech for rustic Sunset Falls. The town was a popular destination wedding spot with its natural beauty rivaling Yellowstone to the south. “Just married” cars paraded up and down Main Street during the height of the summer. Though of course none of them stopped at an antique/thrift/pawn shop.

Odds and ends were for the later stages of a relationship, after all.

Just as well they didn’t stop, since even at its worst, her double vision wouldn’t have kept her from rolling her eyes at those hopeful, loving people pledging their lives to each other, thinking they’d be the lucky ones to buck divorce statistics and human nature to live happily ever after.

Ugh. She’d rather be back designing and installing septic systems in a developing country somewhere.

Except that wasn’t an option anymore.

She shook her head and stashed the cube gingerly in the front pocket of her pullover wool sweater. Lost and found, first thing in the morning. Someone would come looking for it.

Someone who
wasn’t
her. She’d rather be smacked in the head with
another
brick rather than be some guy’s blushing bride.

“Captain. Someone has viewed your Intergalactic Dating Agency profile.”

In the command chair of the
Sinner’s Prayer
, Sinclarion Fifth-Moon Jax opened his bleary eyes.

And immediately closed them again. Wormhole light filled the bridge with a scintillating glare. A glare not unlike his Gre-Gre’s when she sent him her ultimatum. As grand-matriarch of his clan, she issued a lot of ultimatums. As a fifth and utterly redundant son from a lesser clan line, he’d blithely ignored said ultimatums for most of his life.

With an alarmed grunt, Sin forced his eyes open again. Gre-Gre had included a strange beverage called coffee along with her aggravating message, and the vile brew’s effects lingered for lightyears as they slipped through the holes in spacetime toward their destination. “I think someone struck a match in my head,” he growled. “And in my mouth. What
is
that taste?”

At the pilot’s station, Ivan frowned thoughtfully. His vrykoly fingers, as big and dark as the space he navigated, danced with delicate precision over the display. “The viewing seems to have terminated before completion, but the data-cube assessment indicates a high probability of biological compatibility or it would not have activated.”

“True love,” sang Honey from somewhere out of sight on the other side of the bridge. The powerful, exotic drug in the coffee had hit the drakling hard. “Where’s
my
match, and I will light that little world on fire. What’s it called? Mud? Dirt?”

“Earth.” Sin glanced at Ivan warily. “Tell me my inebriated first officer does
not
have a match.”

“No, Captain, he does not,” Ivan said. “Of course, a drakling doesn’t need an external device to trigger ignition.”

“Love yourself first,” Honey howled. A heavy thump and a thin spiral of smoke from behind the rail that separated the upper-tier bridge stations gave away his position. Sin hoped that position was prone and unconscious until the caffeine wore off.

He rubbed his head, as if he’d been the one to smack his skull on the
Prayer
’s hard deck. The shaggy, blunt-cut strands of his dark hair felt muted, unfamiliar under his fingertips, and he dropped his fist to the wide arm of the command chair. “How much longer?”

“Two more slip-throughs, Captain. Earth approach codes from the Intergalactic Dating Agency state the need for concealment, but we have been approved for a landing site near the IDA compound and our target.”