The system devours the investment capital of poor Americans and is one of the major reasons the poor stay poor. Elected officials love to describe how much money they pour into poor neighborhoods and community services. They never, ever, discuss how much is drained out by the criminal justice system. Ladies, the best way to keep your savings in the bank and your folding money in your purse is to keep your men away from cops and out of jail. So read on and prosper.

One of the terms my coauthor and I created is the
electronic plantation
. This is the lifetime restriction on jobs and opportunities that derives from the instant accessibility of arrest information. Increasing use of background checks and widespread access to the National Crime Information Center (NCIC), the federal government’s database of every arrest made in the United States and its territories, means that the record of your arrest follows you around for life.

Even if your arrest record is expunged or sealed or adjudication is withheld or the charges were dismissed or you were acquitted at trial, the arrest record is permanent. Worse, it’s easily accessible. Because employers tend to regard an arrest as tantamount to a conviction, a single arrest can deny you job opportunities forever.

The word
plantation
was chosen because it’s a fighting word for black Americans. I want the danger of this new plantation to get attention and be understood. The masses of young black and Hispanic men in jails are too much to bear. The electronic plantation restricts them to a lifetime of low-wage work once they’re free. Their only hope is to avoid the system long enough to grow up, get educated, and get on with their lives. To do so they must not be penalized forever for arrests that took place during their youth.

The electronic plantation has destroyed one of the greatest features of American life: the opportunity to get a second chance. In the age of paper records, once you paid your debt to society, you were done. You could hang out your thumb, jump the train, or hop the ’hound, and go west, east, north, or south to escape your past. You could start over and forget old legal troubles. The records were thousands of miles away. Records of offenses by juveniles and offenses where adjudication was withheld or where charges were dismissed were truly inaccessible. Not so today. An arrest should not be a life sentence, but it is.

Arrest proofing is all about not attracting police scrutiny and about allaying suspicions when you are confronted by police. Throughout this book, my coauthor and I try to avoid hairsplitting legalisms and stick to standard English. Here, however, are some useful definitions of terms you hear all the time but may never have had explained.

JAIL VS. PRISON.
Jail
is used in this book with its common understanding as a pretrial detention facility. It’s where you go after being arrested.
Prison
is where you serve your sentence after trial or a plea. Both facilities have cells with bars, but they are quite distinct in the criminal justice system.

REASONABLE SUSPICION.
This means that police suspect that you are about to commit a crime. Reasonable suspicion is the standard that allows police to stop you on the street or pull over your car.

PROBABLE CAUSE.
This means that it is more likely than not that a crime has already been committed. Police require probable cause to make an arrest.

MISDEMEANOR.
Also known as “Mr. Meaner” in the trailer park and the ’hood. This refers to an offense for which the penalty is generally one year in prison or less.

FELONY.
This refers to crimes punishable by one year or more in prison. Felonies often carry lifetime penalties such as the loss of the rights to vote and to own a weapon. In my state a felony conviction creates a lifetime ban on holding any job that requires a state license, such as health care, law, insurance, real estate, finance, television and radio broadcasting, and barbering and hairstyling.

The path from reasonable suspicion to felony conviction is a slippery slope down which you slide to jail and a ruined life with amazing speed. This book is all about staying off that slope.

This book tells you how to avoid cops and minimize their opportunities to arrest you and your children, but it’s not a criticism of modern police. The problem today is not—repeat
not
—that police are untrained, incompetent, racist, or corrupt. It’s precisely the opposite. Because police are
better
educated,
better
trained, and more
tightly
disciplined, you’re more likely to get arrested than ever before. Police generally make lawful arrests and are accurate and truthful in their reporting and court testimony. Fewer mistakes mean fewer chances for an attorney to set you free.

The improvement in modern policing is profound. When I was a kid, the police in my city were an organized criminal conspiracy. They ran gambling, prostitution, booze, and loan-sharking, and collected their vig (short for
vigorish
, the usurious interest charged by loan sharks) like a bunch of redneck Sopranos. Lawyers, politicians, and city hall fixers called the shots. Anything, even a murder rap, could be handled for “value received.” Inconvenient people were “shot while fleeing arrest.” In 1955 Florida governor Leroy Collins suspended the sheriff and appointed my father, an FBI agent, to head the police department and clean up that rat’s nest, and that’s what he did.

My father, Dale Carson, being sworn into office as sheriff of Duval County, Florida, by Judge Shields, January 30, 1958. He cleaned out a briar patch of corruption and instituted standards of education and training that produced a modern police force. 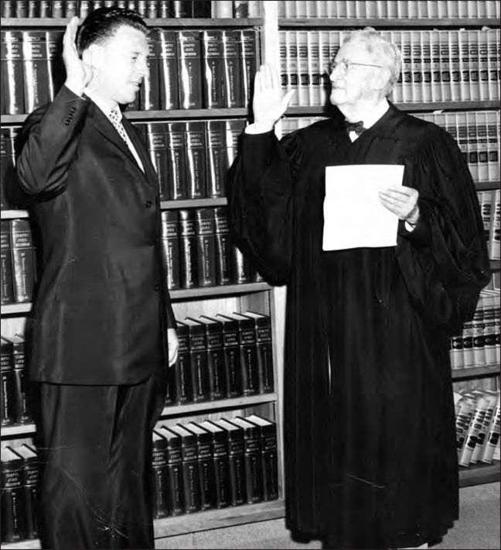 For the past 40 years, police departments all over America have been modernized, trained, and educated. Crooked cops have been arrested and rogue cops fired. The result is the superbly trained police of the new century. Cops today are generally honest and practically ubiquitous, and they’ll arrest you for tossing a gum wrapper!

Nonetheless, police routinely use tactics, such as inciters, that provoke suspects to run, resist, and fight. Using these tactics is called putting a suspect in the trick box. They allow cops to transform a traffic ticket or misdemeanor into a felony arrest guaranteeing incarceration for suspects and impoverishment for the families who pay the legal fees, bail bonds, court costs, and probation charges. Although generally legal, these tactics are highly unethical. I ought to know. I have seen them for years. This book gives detailed instructions on how to avoid getting suckered by cop tricks. It analyzes the famous heads-cops-win-tails-you-lose questions that cops ask before vehicle searches. The chapter “Dirty Cop Tricks” explains many of these tricks, ranging from legal inciters to grossly illegal tactics such as planting drugs and “throw-down” guns on innocent suspects. In “Emergency Procedures,” you will even receive instruction on what to do in the worst of all circumstances—when you are being beaten or shot by police. If you survive, I’ll tell you what to do in the hospital before the bandages come off.

THE HOW-TO AND THE WHY

The book has three parts. Part I deals with the “why”—the reasons you’re more likely to get arrested today than formerly. It discusses the major players in the criminal justice system prior to arrest—cops, bad guys, and the clueless horde. (Judges, prosecutors, attorneys, jailers, and probation officers appear later, after you’re busted.)

Cops are the major players, and understanding them is essential to arrest proofing. Cops are
not
ordinary people. They are licensed, paid, and trained by the state to hunt the two-legged beast—i.e., you. They enjoy hunting people and making arrests. It’s what they do. They’re evaluated and rewarded by their superiors almost exclusively on the number of arrests they make. This is no disparagement. Controlling bad guys with hunter cops is essential for civilization. Just think of the next police officer you meet as a polite great white shark with a well-pressed uniform. And you? You’re a struggling little fish. This will help you adjust your behavior accordingly. To know them is to avoid them. And that, readers, is the beginning of arrest proofing.

And the bad guys? They’re the second group of players. Understanding them is simple. They’re career criminals and they enjoy what they do. They don’t mind hurting and even killing people who get in their way. They enjoy it. To them, the only thing worse than prison is working a straight job. The worst are the violent offenders. In this book you’ll meet several I helped send to the electric chair or prison for life.

OK, readers, get ready for some secret stuff, never seen on TV and unmentioned in the
Daily Fish Wrap
tossed to your front door. Are you seated? Do you have a grip? Here it is:
The criminal justice system does not spend much time arresting and sentencing real bad guys
.

“What?” you say. “That’s impossible!” No doubt you want to challenge me. Do not I, like you, watch the news and see that every single day some bank robber, carjacker, or child molester has been rounded up? Of course, but I see what you don’t—that for every serious bad guy arrested,
hundreds
of petty offenders go to jail. What the criminal justice system actually does most of the time is process the third group of players, the clueless horde. Clueless petty offenders are by far the most important players in the system because, without their vast numbers, and the money that is extracted from them and their families, cops and judges would be filing for unemployment and all those brand-new police stations, jails, and administrative offices would have “for rent” signs hammered in their immaculate lawns.

Who are these people, the bread and butter—nay, the staff of life—for millions of municipal and state employees? They are people who

get an attitude with police

yell at their wives and girlfriends