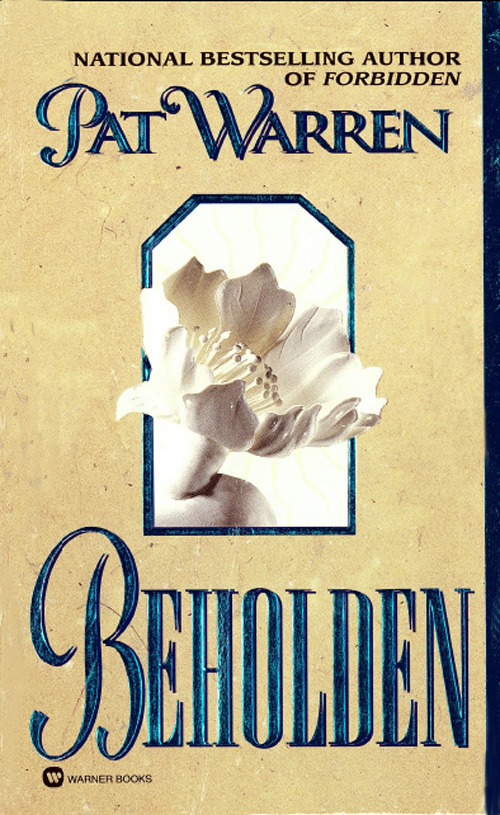 A
lso by
P
at
W
arren

“DO YOU KISS ALL THE WOMEN YOU’RE
ASSIGNED TO PROTECT?”

He almost flinched at that one. “No.”

She scooted off the bed, her bare feet cold on the floor, and hugged herself in a classically defensive posture. “No, of course
not. Then you must have kissed me because I’m so beautiful.” She watched a frown appear and rushed on. “No, I thought not.
You kissed me because you felt sorry for me. Well, I don’t need your pity, thank you very much.” She whirled away from him,
choking back tears.

“Pity?” Luke got to his feet, grabbed her arm and swung her around to face him. Before she could react, he yanked her close
and crushed his mouth to hers.

His mouth devoured hers and his arms molded her body to his with a ruthlessness just barely held in check. He drank from her,
deeply, thoroughly, and finally felt her stunned response.

Just as abruptly, he wrenched his mouth away and let her go. “Did that feel like pity to you?”

“Captures the drama, action and passion that one has come to associate with the Montana Maverick series.”

Additional thanks go to the ER staff of Scottsdale Memorial Hospital, North who so generously allowed me to question and observe.
And specifically to Dr. James E. Roberts for sharing a small portion of his knowledge of reconstructive plastic surgery.

In all cases, I followed their recommendations as closely as fiction would allow. If there are errors, they are all mine.

And last, but certainly not least, to Chris Flynn and Jane Kidder, writing friends extraordinaire, for encouraging, editing,
and for always being there, both personally and professionally.

A cold winter wind rearranged snowdrifts in the large fenced yard, but the man wearing a ski mask, sturdy parka, and heavy
boots scarcely noticed. Squinting, he glanced up into a sky sullen and gray though it was only four in the afternoon. But
the stark whiteness of endless snow that covered the rugged mountain area kept visibility decent. He stepped closer to the
protection of the cabin’s sidewall, taking a moment to catch his breath.

Removing his leather gloves, he shoved them into his pockets and bent his head to light a cigarette, drawing deeply. The trek
up the mountain road hadn’t been easy, even for someone as physically fit as Nick Russo. How the old man had managed it, he’d
never know. Driven on by adrenaline, Nick guessed.

He took another drag on his cigarette, pleased with his own cleverness. He’d sensed days ago that the old geezer would lead
him to the girl, and he had. Some people thought Nick was irresponsible and a hothead. Today, he’d prove them wrong, prove
he was cool and in control. Sam would be proud.

Nick glanced toward the gate he’d had to shove open after shooting off the lock. The old man lay there a few feet away, as
still and lifeless as the two German shepherds Nick
had wasted. Thank God he’d slipped the silencer on his .44 Magnum. Even in this howling wind, he knew that sound could travel.
And the man guarding the girl had sharp ears and keen instincts.

For all the good it would do him this time.

Turning his attention to the cabin, Nick hoped the old guy hadn’t led him astray. There were no markings, no number plate
or mail box. Still, he’d marched to it like a homing pigeon. Nick could see a light on in a small high window, probably the
kitchen. Neither the commotion at the gate nor the barking dogs had alerted the two inside. Good. He’d have the element of
surprise on his side.

Taking a final pull on the cigarette, Nick tossed it into the snow. His fingers tingled as he reached inside his jacket for
the Magnum, and it had nothing to do with the cold. At last, he was going to even an old score and at the same time get rid
of the woman who was standing between his brother and freedom.

With a dark smile of anticipation, Nick made his way to the cabin’s back door.

The day had been much like any other, Terry Ryan was to remember later. A bit hot for autumn in Phoenix with the sun spreading
warmth since dawn, then around six silently slipping behind Camelback Mountain to the northeast of the downtown area. There’d
been not the smallest sign throughout the busy workday to hint of what was to come when she stepped through the double doors
of the
Phoenix Gazette
onto the sidewalk.

“It’s the sort of story that can make a reporter’s career,” Don Simon said as he pushed his small, rimless glasses higher
up on his nose.

Don took his friend’s arm, guiding her across busy Van Buren Street toward the parking garage they both used. “Can I help
you carry some of that?” he asked, indicating her armload.

Terry held her two art folders and a zippered case close to her chest as she adjusted the strap of her leather bag more comfortably
on her shoulder. “Thanks, but I can manage.” A light evening breeze tossed her long, blond hair about as she hurried across.

“I stumbled on this almost by accident, you know,” Don
went on. “And here I thought the police beat was for rookies. Talk about being in the right place at the right time.” Impatiently,
Don shoved a lock of curly hair from his forehead, a habitual gesture. “But you could have blown me away when Cy told me to
follow through. I was sure he’d want to put someone more experienced on such a hot story.”

Terry knew that Cy Werner, the managing editor, could be difficult at times. “You’ve been with the paper five years. That
sounds like a lot of experience to me.” She stepped up onto the curb as a city bus rumbled by, spewing dark fumes. “You discovered
it, you deserve it.”

Terry both liked and admired Don Simon. He’d gone to school with her oldest brother, Sean, and had hung around the Ryan house
since their high school days. Last spring, when she’d mentioned that she was thinking of trying for an interview at the
Gazette
, Don hadn’t hesitated in arranging an appointment for her and giving her a glowing recommendation. Though he modestly denied
it, Terry was certain Don was at least partially responsible for her becoming the youngest political cartoonist on staff.

At the elevators, Don pressed the button, then checked his watch. “I’m meeting with my source at nine tonight. I sure hope
he hasn’t changed his mind about talking.”

Terry glanced over her shoulder and saw no one else around, but lowered her voice nonetheless. “Aren’t you a little worried,
getting involved with underworld characters, policemen who’ve taken bribes, setting up clandestine conversations about money-laundering
schemes?” She’d been shocked when Don had confided earlier some of the details about his possible big scoop. “These are dangerous
men. Maybe you shouldn’t be meeting one of them alone.”

Don followed her into the empty elevator and waited until they were moving before he spoke. “We’re meeting in a public place.”
It was a seedy bar in South Phoenix, but Don saw no reason to mention that. “And he’s a cop.”

Terry’s eyes widened. “What made this man decide to
blow the whistle on his fellow officers?” Years of listening to her policeman father talk about loyalty within the ranks had
her wondering if Don’s informant wasn’t fabricating the whole thing. Cops ratting on cops rarely happened. “I mean, what’s
he going to get out of it?”

“Immunity, he thinks. Of course, that’s not up to me.” Don checked the area to make sure no one could overhear them. It was
after seven and the place was almost deserted. “I hesitated mentioning the whole thing to you, because of your dad and all.”

“Dad’s been retired from the department over a year. But he’s got a lot of friends still on the force. Lord, I hope none of
them are involved.” Terry sighed, knowing how awful morale would be around the Central Precinct when all this hit the fan.