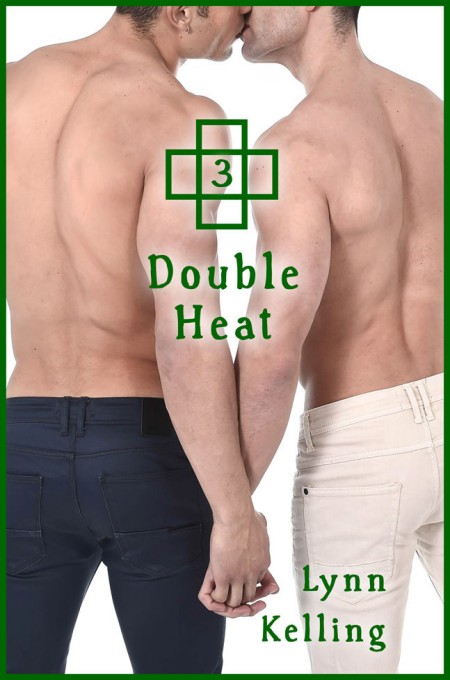 When Evan and Brennan moved in
with their boyfriends, Alek and Luka, they knew things would be complicated, but as their privacy gets eroded, and people around them begin to notice the tangled nature of the four-way relationship, coping becomes a struggle. After Brennan leaves on a brief trip home, and Evan remains behind to enjoy the full attention of both Alek and Luka, the careful balance of things gets thrown off. Ex-boyfriends surface, haunting Evan and Brennan in similar ways, as regret for poor choices threatens their happiness, and the sexual freedom displayed earlier in their lives draws predators willing to use violence, coercion, mind-games and force to take what they want. Though Luka and Alek struggle to protect those they love, it soon becomes clear that the dangers surrounding them will find ways to rush in, trying to take what belongs to them. (M/M)

All rights reserved. No part of this work may be used or reproduced in any manner whatsoever without permission from the publisher, except as allowed by fair use. For information contact
[email protected]
.

All the characters, locations and events herein are fictional. While elements of existing locations or historical characters or events may be used fictitiously, any resemblance to actual people, places or events is coincidental.

For my readers, with love and gratitude.

17. The Trouble with Being Identical

“So, let me paint the picture for you. I’m only eighteen years old. My friends are just starting college. Heck, some of them haven’t even gotten that far. They’re taking a year off to travel after high school, or trying to get internships, or working shitty, entry-level jobs or something. Almost all of them still live at home with their parents and won’t be able to afford to move out on their own for another decade. It’s one level up from normal high school drama. Mom and Dad are on their case, so they’re trying to rebel and assert their independence in some vanilla way. And where am I?”

Listening attentively, Presley Owens lifted a spoonful of cereal to his mouth and didn’t break eye contact. He took a second to puzzle over the rhetorical question, then answered while chewing, “...An apartment? Above a barber shop? Uh... Pennsylvania? You’re probably not being literal, though, are you?”

Blond haired, blue-eyed Brennan Holt gestured around the modest apartment, letting the circumstances speak for themselves. One of Brennan’s boyfriends—Alek Popović—bustled past in business casual attire, carrying an armful of suits. Tall, broad-shouldered, hazel-eyed, dark- and long-haired Alek murmured hurriedly, “Off to the dry cleaners, then running to the office for a bit.” Brennan got a kiss on the cheek. “Later, Pres.” Presley, chewing a mouthful of cereal, waved and grunted goodbye. A moment later, Alek was through the door and starting down the stairs while yelling back over his shoulder, “You don’t have stuff I should bring, too, right?”

“Nah, I’m good. Go ahead!” Brennan answered loudly, shaking his head slightly for Presley’s benefit. Then Brennan’s
other
boyfriend, Luka Popović, passed them by as well. Luka, Alek’s identical twin, looked much the same as his brother except he was dressed in workout gear and carrying a gym bag.

“Four hour shift. Kiss Ev goodbye for me. Make it super dirty,” Luka grinned, tipping Brennan’s chair back a few inches to kiss him upside down on the lips. “Later, Cupcake.”

“Bye,” Brennan smiled, settling down to the floor again.

“Pres, kiss Carter goodbye for me too,” Luka grinned.

“Yeah, right,” Presley replied. “Go on. Get your scrawny ass to work.”

Luka jogged out of the apartment and headed down the steps to the street below. To Presley, Brennan said, “So where was I?”

“’Xactly,” Presley agreed, squinting in commiseration and taking another bite of cereal. He was dressed that morning in a black knit Eagles hat, a tight black t-shirt that hugged his dark-skinned, chiseled physique beautifully, and a pair of cargo pants with combat boots.

“It’s like I’ve joined a cult or something!” Brennan exclaimed. “Mom is gone. Dad is gone, though less gone than Mom, but still technically out of the picture, which means there’s zero supervision. I have
three
boyfriends! We all live together! I don’t even have to get a job since they’re all providing for me so I can go to nursing school and mooch for as long as I need to!”

“Evan counts as a boyfriend?” Presley muttered under his breath, looking surprised and scandalized.

“Oh, stop it,” Brennan said dismissively. “My point is, when I talk to people back in little old Monroe, Louisiana, I have no idea what to say to them about this. They ask all the time. ‘Hey, what’s new? What’re you up to these days? You still living at your new dad’s place?’ If I told them the truth, they’d look at me like I have three heads.”

“You’re not really gonna tell ‘em about Evan, are you?”

“I
have
to tell them about Evan,” Brennan laughed. It came out sounding more crazed than he would have liked. Running his fingers through his hair, long enough now to graze the tops of his ears, his dark-blond roots showing, he considered the problem of Evan for a moment. Brennan didn’t like to label Evan as anything or anyone at all. He just
was
. He was Evan. Technically, Evan was Brennan’s identical twin brother, but that was just one of many labels that didn’t quite explain the entire situation. “Evan was the whole reason I moved here in the first place. Some of my friends have already heard a little about him, so they’re gonna ask.”

Looking horrified, Presley inquired, “And what are you gonna
say
?”

Brennan’s smile only grew. He loved how he had Presley hanging on every word. The apartment had grown quiet with just the two of them left in it, until either Alek or Evan got back from running their errands. Over the past couple of months, Brennan’s bubbly personality had drawn him and Presley into a closer friendship. It was the same dynamic that had allowed Luka and Presley to get along so well over the course of many years. Brennan, like Luka, was a talker. Brennan found Presley to be a great listener, an honest friend, and really easy to confide in about difficult subjects. It also helped that Presley was one of a handful of people who knew the truth about the four-way relationship happening between the two sets of twin brothers. They had to talk to
someone
, other than themselves. It was important to get some outside perspective on it all. The weirder things got, the harder it became to talk to anyone other than Presley, or Presley’s boyfriend Carter. There was also Jimmy, Evan’s mentor, but Jimmy was older than all of them and more like a father figure than a friend. Evan might have been used to talking to Jimmy about his sex life, but Brennan still couldn’t make the leap.

Sitting back in his chair, Brennan thought over his Evan problem for the millionth time. There was very little he’d probably tell his childhood friends and acquaintances about Evan. He could discuss Evan’s appearance, for example, or where he worked, and the more surface-level differences in their personalities. Anything more in-depth than that was verging into dangerous territory. However, elusiveness could provoke suspicion, too.

Eventually, he replied to Presley, saying, “Well, it’s not like I’m gonna show them my impression of his O face or anything.”

Presley almost choked on his cereal.

Chuckling wickedly, Brennan passed his friend a napkin while Presley coughed and wiped his mouth, trying to recover. Sounding slightly hoarse, Presley asked conspiratorially, “
Can
you though?”

“Are you kidding? You have to be kidding. He’s my twin! We have almost the same O face anyway. I’ve compared.”

“How have you
compared
? You all have mirrors or video cameras rigged?” Instantly, he corrected himself. “No, you know what? I don’t even wanna know. Carter’d be horrified by this conversation.”

Carter usually frowned upon the whole big pink elephant in the room that was the ‘sex with your twin brother’ issue. Brennan thought Carter’s position was very understandable. Brennan would, and had, readily admitted as much. He had felt the same way before meeting Evan. It was amazing how circumstances had the ability to radically change one’s point of view on basic human issues regarding morality.

“Please,” Brennan scoffed. “Bathroom mirror, above the sink.” Raising himself up off his seat, Brennan mimed having sex with someone from behind. It was just a few thrusts holding an imaginary ass. Then he did his best impression of Evan’s expression during orgasm, complete with crinkled brow, the quivering lower lip with his mouth slightly opened, and added a slight indrawn breath. It was like a gentle gasp. Brennan had heard it often enough to have perfected his own re-creation of it.

Presley just stared at him, his mouth also hanging open. Brennan sat back down, wearing a triumphant grin. He took a bite of his own cereal as Presley continued to stare at him with shock. Composing himself, becoming intentionally serious and straight-faced, Brennan gave Presley his most innocent expression.