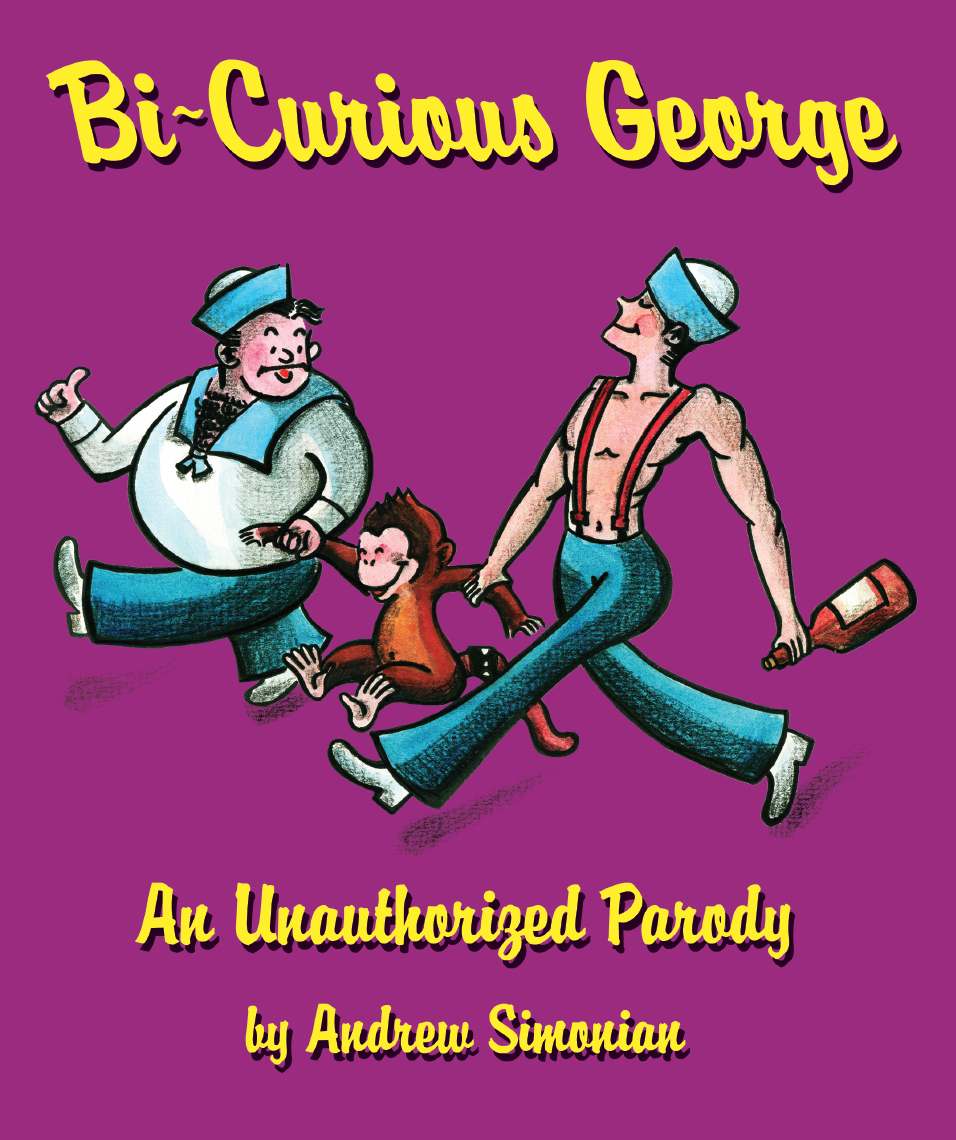 He lived in the jungle.

He was a straight little monkey but always very . . . curious.

One day George saw a man.

He had on a sassy purple beret.

And George got excited, despite himself.

The man saw George too.

“I’m always in the mood for some hot monkey love,” he thought.

“I would like to take him home with me.”

He put his beret on the ground, and, of course, George couldn’t help himself.

He came down from the tree to verify there was a real designer label inside the jaunty purple chapeau.

The man had looked so sexy in the beret.

George wanted to be sexy too.

He picked it up and put it on.

The beret still smelled of the man’s cologne.

George closed his eyes to bask in the thick cloud of man stank.

The man picked him up quickly and popped him into his shoulder bag.

George was caught. And a little excited.

The man with the sassy purple beret put George into a little boat with a strapping young lad who rowed them to a big ship.

He was sad to be leaving his home, but he was still a little . . . curious.

On the big ship, the man took George out of his murse.

“I’m not a fucking Chihuahua.”

“George, I was once like you. And now I am here to help you,” said the man. “I am going to take you to a big club in the city called The Zoo. I have a feeling you will like it there. A lot. You will also enjoy this special cruise we are on. Now run along and play. But don’t do anything I wouldn’t do!”

George promised to be good.

On the deck he found some oiled-up men dancing and drinking.

He wondered how they could do so many of these things called “body shots.”

He was very curious.

Finally he HAD to try.

It looked easy. But--

“WHERE IS GEORGE?” yelled every able-bodied seaman.

At last they saw him trying to make himself puke, and almost all tired out.

How I Killed Margaret Thatcher by Anthony Cartwright
The Age of Miracles by Marianne Williamson
SeductiveTracks by Elizabeth Lapthorne
Blowback (The Black Cipher Files Book 1) by Hughey, Lisa
Mind Games by Moore, TJ
Enslave Me Sweetly by Gena Showalter
The Path of Minor Planets: A Novel by Greer, Andrew Sean
Against Her Odds: when dedication meets desire by Love, Natalie
Knives and Sheaths by Nalini Singh
Give Me All Of You by Beazer, Delka