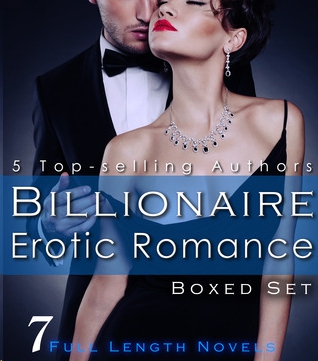 Warning: This work contains sexual content and is written for adults only (18+). All characters depicted in this story are over 18 years of age.

Exclusive teasers and excerpts for Priscilla West’s highly anticipated Surrender Series are available after every novel, make sure you don’t miss them!
Also, check out the teaser chapters of Forbidden Surrender at the very end of the collection!

Reviews for the Surrender Series (4.5 out of 5 stars on Amazon.com):
“Wow!!! Love this series. Vincent has shot to the top of my BBF list… READ THIS SERIES , you will not be disappointed.”
- Jenny D.

“I think Secret Surrender solidified this series as a must-read. The emotions evoked in this book are so much more dynamic, than in the previous one. And for those of you wondering, it is still on the short side, BUT with so much going on it didn't feel lacking at all! I will warn you though, there is a cliff hanger, and I kind of saw it coming but that didn't stop my heart from almost beating out of my chest, and there is a possibility that I yelled "Oh, come on! Seriously?!?!" Yes, I was a bit angsty with this ending. HOWEVER, the finale is coming out in late October! Yay!!! I am in love with this series, and cannot wait for the conclusion!!”
-Emily McGee (Same Book Different Review Blog)

Description:
"What gives you a thrill Kristen?"

The minute I saw Vincent Sorenson, I knew he was trouble. Billionaire. Bad boy. And dangerously sexy. He was everything I craved, and nothing I needed.
Unfortunately, I couldn't just avoid him. The higher ups at my company decided they needed his business, and I was on the team to bring him in. Vincent Sorenson didn't seem as interested in business as he was in me, but I knew that was a door better left unopened. If I got involved with him, it would only unearth the pain I spent years trying to bury.

I thought I had it under control, but I seriously underestimated Vincent's seductive charm and silver-tongue. I would soon find out how delicious it would feel to let myself fall into this forbidden surrender.

The Sandstone Affair
by Priscilla West

Bonds of Attraction
by Alana Davis

Winner Takes All
by Sherilyn Gray

Bound by Fate
by Sherilyn Gray

One Last Dance
by Angela Stephens

His Every Touch
by Harriet Lovelace

His Secret Desire
by Alana Davis

"There is more than one way to be strong, Julia. You know one of them, I can teach you the other."

Julia Sharp has always been a strong woman. Her strength is what helped her through the days when her fledgling company struggled through the grip of a global recession.

Since that time her business has grown tremendously, aided in part by the investment firm, Sandstone Ventures.

For once in her life, she feels like she has everything she could ever want, but fate has other plans for her.

In the span of one day, everything that Julia has worked for crumbles in front of her.

With no other options, she turns to the wealthy and enigmatic partner of Sandstone Ventures, Mark Stone, for help.

What Mark Stone asks of her will delve into her darkest fantasies and test the very limits of her strength.

Sign up for Priscilla West’s mailing to find out about when the next boxed set will be released!

“Honey, we should talk about some options.” Dad’s weary eyes searched for mine.

“Stop it. Just stop it. You’re starting to sound like them.” My eyes wandered across the room, settling on the quietly beeping heart rate monitor next to the bed. I couldn’t look at him, especially when he started talking like this.

“You can’t keep going on like this, throwing away your money on an old man.”

“He said there was a possibility it
could
work, Julia.”

I studied the pattern on the linoleum tiles, trying to calm myself down. Every so often he’d bring this up again, and it never ceased to rile me up all the same. I think it was when the pain got bad for him. I tried to ask the doctors to increase the dosage on the morphine drip, but they said it was too dangerous.

“Stop talking like that. I’m not going to lose you like we lost Mom. I’m going to continue paying for Glenvale and that’s final!” I stared down at my hands, trembling slightly. I gripped the plastic handle on the hospital bed, my vision starting to blur with wetness.

I needed to be strong. I needed to be strong for Dad. Mom made me promise that to her when she was in the hospital, when she had lain in that antiseptic room just waiting for the disease to take her. It was hard on both of us, but Dad took the worst of it. I was too busy building up Lynx, the magazine company I founded, to have much time to think about her passing. Every day I would rush over to the hospital after work to check on her, but Dad was with her all the time. He practically slept in that hospital room. We tried every treatment that the insurance covered, but it wasn’t enough to save her in the end.

And now it’s happening all over again.

No. This time it’s different. Lynx is no longer the scrappy magazine operating out of a basement apartment. It doesn’t matter if Dad’s insurance won’t cover the new experimental treatments. Now, I can make sure he has the best treatment that money can buy.

“You were always so headstrong.” Dad chuckled lightly, realizing that he wasn’t going to win this argument. “So how’s your world?”

“Good Daddy, everything is good.”

“How’s the big story? Ready to go to press?”

“Soon, there are a few more things to sort out, but it’s getting there.”

“What about that handsome young man? Blake.” His eyes twinkled at me.

“You mean Mark? He’s the only one you met. He’s fine I guess, I don’t see him around that much. He’s been getting on my case, but at least he doesn’t hold the fact that they own the majority stake in the company over my head constantly.”

“You owe them a lot you know. Especially Mark.”

Blake and Mark Stone of Sandstone Ventures had saved Lynx in 2008 with an injection of capital, when the recession pretty much froze the news stands. No one was buying magazines. It was the right decision at the time to take their offer, but I couldn’t help but regret losing full control over Lynx. It was my company, my child, my life.

Even though Mark had never been heavy handed when giving me “advice”, I knew that ultimately they could force the company to go in whichever direction they wanted. I followed Mark’s advice when it made sense, but sometimes I had to ignore him.

Mark had never been able to convince me to give up my feud with the larger and more popular Ladies World. I knew that Sandstone Ventures had a stake in Ladies World, but that didn’t stop me from undercutting them, scooping the heck out of their reporters, and calling them out on their vapid articles.

I knew I should have given him a break, especially since he got my father into Glenvale when the hospital director had claimed that all of the beds were full.

“Mark’s a good man, Julia. Why doesn’t he come around anymore?”

“He’s very busy Dad, he was just being polite when he came to visit.”

Truth was, Mark had been adamant about visiting my father with me and insisted on speaking to the hospital director to make sure that Dad had the best doctor on his case. It was one of the only times in recent memory that he hadn’t hounded me about leaving Ladies World alone.

“Oh please, Julia, I saw the way you two looked at each other last time he was here. He can’t be so busy that he doesn’t have time for my lovely daughter.”

I had always been attracted to Mark, and he really went out of his way to help me out so he must have felt something for me too, but neither of us ever acted on those impulses. I guess he always seemed so composed and distant. Thinking about Mark’s square chin and piercing eyes was sending uncomfortable waves of heat between my thighs and I wasn’t quite ready for those feelings again. Nor did I want to have to justify my relationship status to Dad yet again.

“Listen Dad, I have to get to work. I’ll be around to visit later tonight okay?”

Something’s different today. I can tell the second I walk in the door to the office. Instead of the usual noise and chatter of reporters and designers brainstorming and teasing one another, or the frantic scurry of interns running photos to various cubicles, there is a hushed and focused pall across the room. I see Jeff mouth, “She’s here” to the layout manager.

Crossing the room in silence, acutely aware of the absence of clicking keyboards, I push this morning’s conversation with Daddy out of my head and put on my business face.

Janice stands up as I approach. That’s not normal.

“You need to wait here,” Janice says in a quiet but heavy voice. I try to push past her.

“Julia. Stop!” Janice jumps between me and the door. “Just stop a moment.”

“What on earth?” I try to control my confused reaction. Janice has been my administrative assistant since the first issue of Lynx went to press. She’s a good employee and an even better friend. When we’re at yoga, lunch or anywhere else she calls me Julia. But in all these years inside this office I have always been “Miss Sharp.”

“Julia, I don’t know what’s going on, but some lawyer from Sandstone came in today with security guards. They’ve been going through the stuff in your office all morning, I tried to stop them but—”

“Janice, what the hell is—”

“I’m sorry Julia, I have to let them know that you’re here.”

“Miss Sharp has arrived,” Janice says into the intercom and sits down looking at the desk. Before I can get a grasp on what any of this means, two armed security guards emerge from my office. One reaches out toward me and motions me into the door.

“Did something happen here?” I ask the somber guard. “Have I been robbed?”

“Oh, someone was robbed, Miss Sharp,” the oily voice I recognize at once calls from the inner office. “But, it wasn’t you.”

“Mr. Allen.” I shudder when I say his name. As one of Sandstone Venture’s attorneys, and the personal lawyer of Blake Stone, Kenneth Allen is more of a pompous bully than an officer of the court. He’s been insufferable ever since I turned down his clumsy attempts at courtship.