Read Black & Ugly as Ever Online

Black & Ugly as Ever 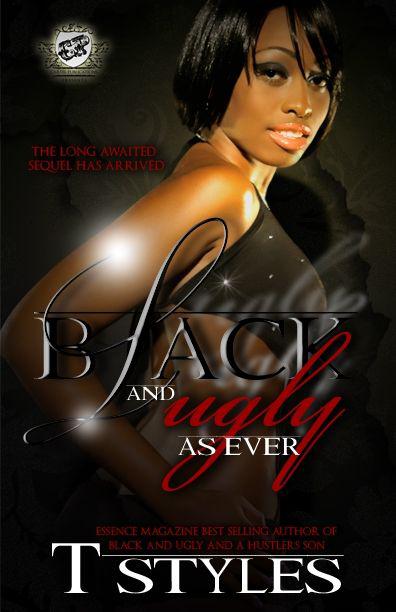 Copyright © 2008 by The Cartel Publications. All rights reserved. No part of this book may be reproduced in any form without permission from the author, except by reviewer who may quote passages to be printed in a newspaper or magazine.

PUBLISHER’S NOTE:
This book is a work of fiction. Names, characters, businesses, organizations, places, events and incidents are the product of the author’s imagination or are used fictionally. Any resemblance of actual persons, living or dead, events, or locales is entirely coincidental.

This is dedicated to two wonderful people. Alphonsa Dunlap. I know the angels are laughing because of you.
This is also dedicated to my step-father Bobby Cole who also passed recently. You’ll always be the LEGEND and my TRUE father.
You’re both missed but I know I’ll see you again.

First I’d like to thank my family (Mommy, Tina, Kavena, Kajel, D’Juan, CeCe, Angel, Charisse, Destanee, Darius, Kiara, Vincent, Aunt Paula, Dee, Carlos “30” aka Nut and anyone else I’ve missed). You guys put up with my absence as I struggled to put closure to a story so many people enjoyed. Thanks for loving me regardless, as much as I love you.

I’d like to thank my friends. There are so many of you so I’ll try to remember as many as I can. Monica, thanks for being a true-blue friend. Forever! You’re the best. Also, Mona Harris, Allyn, My Assistant Phallon Perry, you’re the best. We sooo need you! Thanks for holding us down! Giovanna, Krystal, Laina, and everyone else I missed.

I’d like to thank my authors, who motivated me to get behind my pen again. Eyone Williams, Anthony Fields, K.D. Harris, V.J. Gotastory, and Tiona Dawkins, I love you guys. I’d also like to thank Jason Poole. You’ve become so much more to me than just an author. You’re my homie and someone I consider family. I love and appreciate how you ride for me, and the Cartel, Jason. And that’s real talk! I will never forget our long talks and how you always motivated me when I was down. We’re kindred spirits.

I’d also like to thank Nikki Turner! Girl you are too much fun! Thanks for being real and driven. Your energy has rubbed off on me and has encouraged me to excel even higher! And...thanks for giving me the opportunity to meet Neyo at club Love in D.C.! He’s one of my favorite artists! You are the best!! I’d like to thank my Pep Squad/Street Team members. I hope you guys find pride in repping this book the way you repped the other Cartel titles.

I would be remised if I didn’t thank Davida Baldwin for placing such a hot cover on this novel, and Shanice B for providing such a beautiful face.

I’d also like to thank Charisse, my inspiration for everything I do. Thanks for staying true and standing behind me through the fire. I love you.

Last but not least, I’d like to thank my fans both old and new. Your support means everything to me.
For those of you who have a hard time finding the original story, Black & Ugly, I apologize. It’s unfortunate that there are individuals who hate on the success of others and like to hold them back. Contact your local libraries and me. Maybe we can think of something together. You should also know, that I do everything for you.

I haven’t dropped a line to you since our debut novel, “Shyt List”, but I’m back!! First off, I want to say thanks to all of you who continue to ride wit’ The Cartel!! We love and appreciate the support that ya’ll have and always show us. Through your support, encouragement, and love, the HEART of The Cartel continues to pump. Since I last spoke to you, our family has truly grown. We have some of the hottest authors in the street lit game on our squad puttin’ out bangers and will continue to do so, for decades to come.

Now, on to business at hand, “Black and Ugly As Ever.” I’m truly honored to be stampin’ this one. This joint right here is cold! T. takes you on an emotional roller coaster and when the ride is over, you will definitely want to go again. I’m still trippin’ off some of the shit Parade does, she a mess, but she keeps it gangsta always. So sit back and enjoy! I PROMISE you won’t be disappointed! Speaking of women who keep it gangsta, in this novel, we pay homage to:

Wahida is one of the most vicious authors in the game. Her arsenal of novels include: “Thugs and the Women Who Love Them”, “Payback is a Mutha”, “Thug Matrimony”, “Payback With Ya Life”, “Every Thug Needs A Lady”, and “Sleeping With The Enemy”. Although her writing is hardcore, Wahida is humble, real, and respected. She’s definitely gettin’ it. It’s my honor to pay tribute to her. Wahida will always have love wit’ The Cartel.

Oh Yeah, if you’re in the D.C./Maryland area, feel free to stop by and say what’s up at our new book store. Cartel Café’ & Books, located at 5011 B Indian Head Highway Oxon Hill, MD.

Quick Recap From
Black And Ugly

In Black and Ugly, Sky Taylor, Parade Knight, Miss Wayne and Daffany Stans are introduced. Growing up in Hyattsville, Maryland, these friends struggle to keep their bond together.

Sky persecuted Parade for her dark skin. She believed her own light complexion gave her the advantage and didn’t mind telling people to their face, including Parade. But what she didn’t know was that her man Jay was sleeping with Parade behind her back.

Parade hates her complexion because of the scratches on her face, and the darkness of her skin. Despite her inner battle, she finds comfort in the curviness of her body. Miss Wayne tells her she could eliminate some of the pain she feels if she’d just take care of her acne problem, stop fighting and take pride in her beautiful skin tone. Her unattractive boyfriend Melvin, who she dumps early on, does nothing but use her sexually making her feel worse. It’s not until she gets with Jay, a neighborhood dealer, behind Sky’s back that she starts to gain confidence. But Jay also adds to the pressure by trying to keep her down by saying she’s ugly.

One night after being with Parade an hour earlier, Jay and Sky meet up at the movies. There she sees the neighborhood kingpin Smokes and his wife who is sporting expensive jewelry. Instead of focusing on Jay, Sky does everything she can to get Smokes’ attention. Smokes’shows a little interest and gets into a brief altercation with his wife when he’s caught. The two leave and Sky misses her chance. Still at the movies, Sky reaches over to kiss Jay and notices he smells like the perfume she gave Parade. She immediately suspects he’s been with her instead of another girl. She questions Jay about his infidelities but doesn’t let on that she thinks Parade’s the culprit. After all, to Sky, Parade isn’t even in her league.

The next day at the mall, Parade, Sky, Miss Wayne and Daffany, who recently discovered she was HIV positive, gets into an altercation. All because Parade believed a girl disrespected Sky. Parade holds her own and wins the battle.

In a few days, when all of the friends are at a party, Sky gets into a fight with a girl and kills her. Nobody knows Sky was involved because the fight was out of their view. The next day the murder is publicized on the news. The first person Sky confides in that she was the murderer was the same person she hurts on a regular basis, Parade. Sky tells Parade that the girl she killed in self defense was the same girl Parade fought at the mall. Parade feels guilty for getting Sky involved and vows to keep her secret.

Pretty soon Daffany and Miss Wayne suspect Sky’s the one who murdered the girl. Unbeknownst to them, the woman who was murdered was not the girl at the mall. Instead she was Smokes’, a coldhearted drug dealer’s wife. Smokes eventually gets a lead that Sky’s involved. And to get his revenge, he hired Cannon, a hit man to find out for sure. Cannon eventually finds Parade to get closer to Sky. But he immediately becomes attracted to her beauty during the same time she starts to care about her physical appearance. With Miss Wayne’s support, Parade dresses better than her friends and exhibits strong confidence. One of the first things she does is dump her boyfriend and cut off Jay. No longer able to control her, Jay becomes angry and tries to muscle Parade into a relationship. But Parade stands firm on leaving him alone, as Cannon, eventually takes up her time. Plus she doesn’t want to take the risk of Sky finding out about her betrayal. The only problem is Parade doesn’t know Cannon’s true motives.

One day during a game of truth or dare at Miss Wayne’s, Cannon’s true intentions are revealed and Parade is devastated. He not only admits that he’s hired to kill the person responsible for his client’s wife’s death, he also says that the person responsible will die that night. He never, ever mentions his client’s name. Right before he attempts to place a bullet in Sky’s head, someone breaks in trying to rob Miss Wayne’s apartment and Cannon is murdered. Although he wasn’t able to go through with the hit, Sky is eventually killed the next day by someone else Smokes hired. Terrified, they don’t go to the funeral. And eventually Smokes sends a message that if they ever said a word about Cannon or his involvement, he’d have them killed too. The only problem is no one knew who Smokes is because he never revealed himself.

A little later, Parade meets Smokes and after spending a lot of time together he eventually proposes to her. She accepts and he continues to hide his true identity from her. So Parade has no idea that he was involved in the murder of Sky. Excited about getting married, she decides to tell her friends about her engagement. Daffany, Parade and Miss Wayne all meet at the mall after not seeing each other since Sky’s death. When they do, they see the girl they had believed Sky murdered. Soon it was revealed that Sky lied about everything. And when Smokes name comes up in the revelation, Parade is shocked! Parade decides to keep her relationship with him a secret from her friends. But worse of all, she still decides to go through with the engagement.

And now the story continues…
“
Hearthrob Never, Black and Ugly As Ever.”
-
notorious big
Parade Knight
The Present

Someone asked me one day, why my mother named me Parade. I ignored them. It’s hard hearing the truth, that I was given my name because it took a
parade
blocking the abortion clinic to stop that bitch from terminating the pregnancy. I’ve been doomed since the day I was born. So it’s no wonder why once again I’m sitting outside in my car at night, in Quincy Manor parking lot. Someplace I don’t belong.

Drama follows me around like my shadow. I know I shouldn’t be here and everything in me tells me I should go. Yet I can’t seem to move my foot from the brake to the gas peddle. As I stare at my 4 carat engagement ring, I start wondering why I even believed I was ready for a commitment, when I can’t get the one man I ever truly loved out my mind and off my heart.