Read Choose Me (The Me Novellas) Online

Choose Me (The Me Novellas) 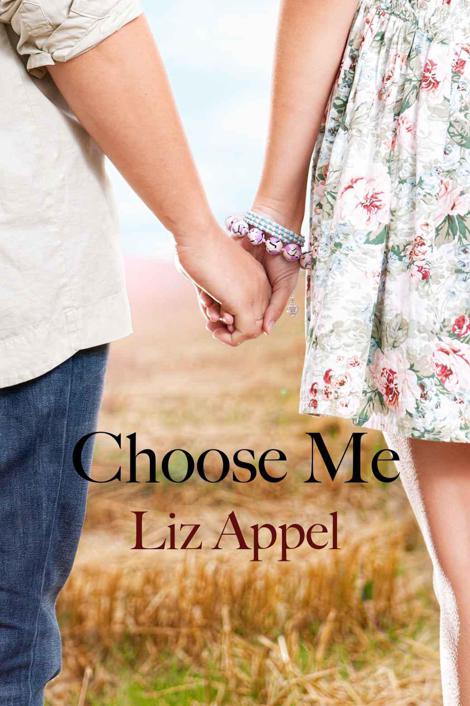 I brushed at a stray curl of hair and stared at the painting in front of me. “OK. Then pea soup. The leaves look like pea soup.”

We were in the garage, me poised in front of my art easel, Katie hunting for an extension cord in a box filled with cables and wires. There was no air conditioning and, despite being mid-September, it was warm and stuffy, even though the metal door was fully open.

She stopped and glanced at the canvas. “They look like leaves,” she said. “Sunflower leaves. Which is exactly what they are.”

“Sunflower leaves that have been vomited on,” I muttered under my breath. I dabbed the paintbrush on my palette, picked up a lighter shade of green, and dotted it on the canvas.

“Is this for the show?” Katie asked. She’d found the cord and had it looped over her right arm.

“It looks fine,” Katie said, smiling. “More than fine. And it’s better than anything I could do.”

But you’re not an artist, I wanted to say. You’re not exhibiting these at a show. A show where other artists will be sizing you up and comparing your work.

I sighed. Why did I have to paint flowers? Why had I settled on Georgia O’Keeffe as my role model? Why couldn’t I have chosen something simpler
…
something like big lines or geometric squares? Piet Mondrian had done it back in the 19
th
century. And then there had been the whole De Stijl movement. Painting squares and lines seemed infinitely easier than blending greens and yellows to create vomit-colored leaves on sunflowers.

“When is the show?” Katie asked.

“This weekend.” I dabbed more paint and grimaced. It was useless. I’d never have it ready in three days.

The naivete of non-artists was startling. I just nodded, bit back a smart-ass remark and mumbled a thanks as she left the garage.

It wasn’t her fault. It wasn’t anyone’s fault but mine. I should have stuck to my own little studio gallery in the Warehouse District. Painted my pictures and done my notecard commissions. It was enough. It had been enough for a long time.

But then Ellen had come by two weeks ago. Ellen from the gallery three doors down. Ellen who painted magnificent Lake Superior landscapes. She’d mentioned the art show at the gallery off Lyndale and suggested I bring a few pieces to exhibit. I couldn’t blame my response on being drunk or distracted or anything. I’d just looked at her, open-mouthed, and said yes.

I grabbed a different brush and picked up a mustard color. I dabbed it on a petal, blending it gently with the existing paint. Ellen worked strictly with watercolor. Oil was at least forgiving, I told myself. I could layer the paint two inches thick in my attempt to make it right. I smiled. Maybe that’s what I would do with the leaves. Make them so thick with layers of paint that they’d look three dimensional in comparison.

I felt the presence of someone else in the garage with me before I saw them. I stopped painting and turned toward the door. Andy stood there, cell phone in hand. I set the brush down and he walked toward me.

“How’s it going?” he asked, planting a kiss on the top of my head.

I leaned into him. “Awful.”

I motioned to the canvas in front of me. “This.”

I rolled my eyes. Andy could look at any generic painting and call it a masterpiece. His eyes were not discerning. At all. At least when it came to art.

“Yes. That’s what I mean,” he said, correcting himself. “This might be the worst painting in the history of modern art. Ancient art, even.”

“I wasn’t looking for
that
,” I said, frowning.

“You’re too hard on yourself,” he said. He rubbed my shoulder with his free hand, his fingers gently kneading my skin.

His fingers dug in harder. “Stop.”

I sighed. I wanted to strip off my shirt and lay down on the concrete floor and beg him to massage me. I was stiff and sore, and I was stressed and tired.

He squeezed my shoulder. “I have to meet with someone up in Maple Grove. They want to check out the house off of Weaver Lake.”

Andy was a rental property manager. What had started as managing his parents’ rental homes—two of them, including the one we lived in—had morphed into a full time job. He managed upwards of forty homes at any given time, including a half dozen duplexes near the U of M campus. For a guy with as much formal education as I had—i.e., high school—he was doing pretty well for himself.

“Everything,” I said. “This shitty painting. The show. All of it.”

He gripped my shoulder, spun me in my chair so I was facing him.

“Stop,” he said again. His dark eyes were narrowed, his mouth set in a firm line. “Don’t be so negative.”

I waved my hand at the painting again. “Hard not to be.”

“Fine isn’t enough.” I knew I was sulking, knew I was being difficult, but I didn’t care.

“So don’t exhibit,” he said. He checked his phone, his thumb scrolling across the screen. “Tell Ellen no. You’ve changed your mind.”

“Why not? You don’t want to do it. You’ve been complaining about it since the day you told her yes.”

“You’re totally stressing about it, though,” Andy said. He leaned down so his face was next to mine. “You don’t need this. And you don’t want to do it.”

I stared into his eyes, those chocolate brown eyes that, even after almost two years, still made my heart melt.

He smiled, then kissed me. His lips were warm as they moved against mine and I leaned into him, wrapping my arms around his neck.

“Then stop complaining and do it,” he whispered. “Even if your leaves look like vomit.”

I smiled. Andy knew me better than anyone. Better than I knew myself most days. And I was lucky to have him.

I picked up my brush again. “Fine. I’ll call this one Sick Sunflower.”

It wasn’t. But it was the best I could do.

“Is Dylan cooking?” Andy yelled from the front door.

The smell of burnt bread hung thick in the air, the smoke in the kitchen almost as heavy.

I swore under my breath.

“No,” I called down. I tossed the burnt homemade pizza in the kitchen trash, cringing as the steaming, melted cheese clung to my fingers. Two hours worth of work, down the drain. Or, rather, in the trash can.

Katie came flying up the stairs from her bedroom. “What’s that smell?”

“Dinner,” Andy said. “Or rather, the remains of it. Meg cremated it.”

I shook my head. “I don’t know what happened. I left the kitchen for a minute.”

Andy looked at the contents of the trash. “Huh. Must have had the oven set at like a thousand degrees. You know, if you were only gone a minute...”

He grabbed my hand and pulled me into him, wrapping me in a massive hug. “I love you,” he murmured, his mouth next to my ear. “And we’ll order pizza.”

Katie was already on the phone, ordering from Broadway.

“Still worried about tomorrow?” Andy opened the refrigerator and pulled out a can of Surly. He handed it to me.

The show was tomorrow. I’d spent the better half of the afternoon hauling canvases into the airy gallery on Lyndale. Ellen was already there when I’d arrived, supervising the mounting of her pieces. She had almost a dozen to display in a range of sizes. One of Split Rock lighthouse at sunrise—the sun a brilliant orange orb against the azure blue of Lake Superior. Another of the Lift Bridge in Duluth—a perfect window to the vastness of the lake. I marveled at them, at the richness of color, at the unique perspectives. She was a master.

And I was not. I’d brought my paintings in and stacked them carefully along the back wall where my display would be. I had half the wall to use for exhibiting. The other half was reserved for an artist I didn’t know. Yuri Baikov. I sincerely hoped he didn’t paint flowers. Or, if he did, that he was worse than me.

I popped the top and took a drink. It was their Hell beer, a fitting choice for where I was at in my day. I let it pool in my mouth before swallowing it down, savoring the taste. No one crafted beer like Surly. No one.

I sat down at the dining room table and looked at Andy. “Yes.”

He straddled the chair next to me. “Tell me.”

“I’m gonna grab the pizza,” Katie said. She bounded down the steps and we were alone.

I played with the tab on my beer. “It’s for real. You know? It’s not just me in my little studio, selling my crappy paintings. Or not selling them.”

“I mean, I’m in this show with other artists. Real artists.”

He grabbed my hands in his. “News flash, hon,” he said. “You
are
a real artist.”

He frowned. “How do you figure?”

“They went to school for this,” I said. “They’ve been doing this for years. Me? It’s like a hobby. A hobby I’ve tried to turn into a career.”

“You have turned it into a career,” he reminded me.

“Only because Gretchen buys my cards.”

Gretchen Crist owned a stationery store on Nicollet. She commissioned me to do notecards and greeting cards. Without that, I wouldn’t be making money on my art. I think I’d sold a total of five paintings. Ever. And all of those had been to family, to people who felt obligated to purchase. Sort of like when I’d been a Girl Scout, hawking cookies. Except my paintings were more than three bucks a piece. The stationery was my bread and butter. The stuff that paid my rent, that bought my groceries. Which was great. But I wanted more. At least I thought I did.

Andy stroked my hands with his thumbs. “It doesn’t matter.”

He squeezed my hands tight. “Look at me,” he commanded.

Slowly, I opened my eyes.

I nodded. I hated feeling so unsure, so insecure. It wasn’t like me. I’d carved out a comfortable life for myself, not only with my little studio but with my personal life, too. I didn’t have anxiety. About anything. Andy and I had been together for two years, first as roommates, slowly morphing into something more. We fit, in every way. He didn’t understand art any more than I understood the intricacies of property management, but it didn’t matter. We loved good food, we loved spending time together, and we loved each other. He was perfect for me.

And last spring, Katie had moved in, filled the vacant bedroom next to mine on the lower level of the house we shared. Five months later and she was still here. We got along great, but that wasn’t the reason she’d stayed. She’d stayed for Dylan. Our other roommate. Andy’s cousin.

I had a nice gig with my art. I had a boyfriend who loved me, and roommates I adored. I didn’t need anything else. I was happy.

So why on earth was I putting myself through the torture of this art show?

Because I wanted more.

Andy reached out, tipped my chin up. He smiled at me. “I believe in you,” he repeated.

He stood up. “I need to make a couple calls. Have two vacancies coming up next week.”