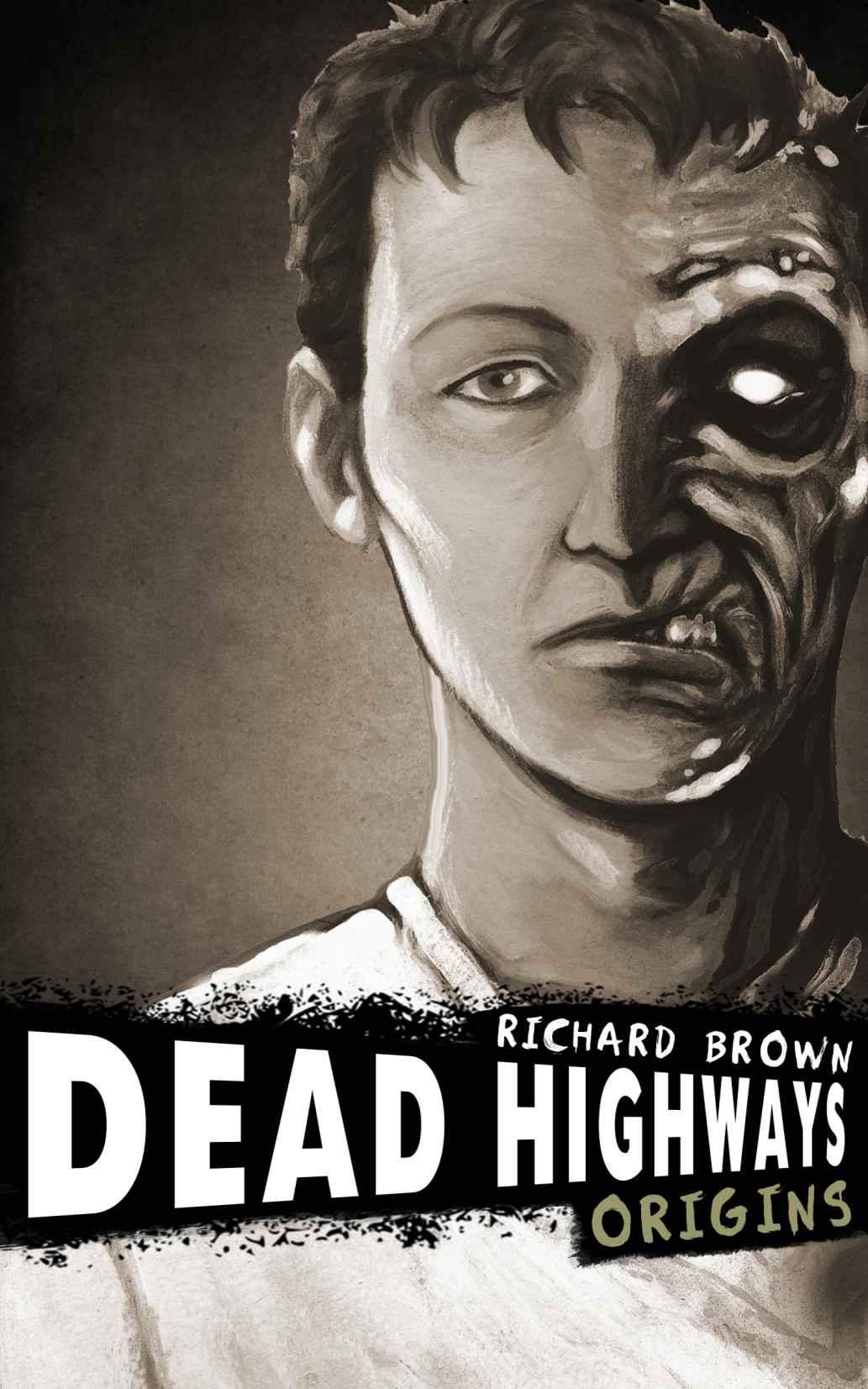 His name is Jimmy. He's twenty-two, skinny, and still a virgin. He has no friends. He lives with his grandma and works at her used bookstore. He’s a self-described loser.
This is your hero.
By his side, a diverse group of survivors, including a cop, a prostitute, a drug dealer, and even a newborn baby. They're crossing the country on a crazy and comical post-apocalyptic adventure, following the infected as they migrate west. That's right—these zombies don't just stand around waiting to be stimulated; they're on a mission, and what is guiding them awaits Jimmy and his fellow survivors at the end of these dead highways.
But along the way, Jimmy may discover something even greater.
His place in the world.
Finally.
Even if everyone else is gone.

Book 1 in the Dead Highways Series

For more information about the author visit:

But we’ll get back to that later.

I wasn’t there to get a present for my imaginary girlfriend. I wanted a gun for myself—needed one, just in case things got worse.

The biggest problem was I knew nothing about guns. I'd never held a gun before, let alone fired one. Sure I'd seen plenty of guns on TV and in movies, but how much of that was just camera tricks and special effects? How many times would I have to shoot someone to make sure they stayed down? But first I needed to know—

“Where do you put the bullets?” I asked, thoroughly examining the pistol Ted handed me. The gun was cold and heavier than I expected.

Ted was the owner of Guns Unlimited. He was a rather large man with equally large hands. His skin was darkly tanned and he had freckles everywhere, more than I think I'd ever seen on one person. I found myself staring at them curiously, even while he did his best to ease my anxiety and answer my stupid questions.

He took the gun from me. It looked like a toy in his hands.

“See this,” he said, pointing at what looked to be a button or switch of some kind on the left side of the gun, near the top of the handle. “Push it to release the magazine.”

He demonstrated and then handed me the magazine.

He looked at me like I was an idiot.

I suppose that was fair.

“You sure you want to buy a gun? I mean, you've thought this through?”

He looked at me like I was a liar.

He turned around and walked through an archway to the rear of the store.

“I really appreciate your help.”

“It's no problem,” he said from the back storage room. “We all have to learn from someone. My dad taught me when I was young.” Ted returned to the counter with a small box of ammunition. “I could sell you a gun even if you have no clue how to use it. I could let you shoot yourself in the face, and my hands would be clean. But that's not good enough for me. I want a clean conscience, too. So I take gun safety very seriously. I really hope you're listening. I don't want to see on the news that you committed suicide. You ain't depressed or anything, right?”

“No sir. Though it might be hard to shoot myself if I can't figure out how to load it.”

“I'd say it would be difficult to shoot someone else too, assuming you must. You said you wanted the gun for protection.”

“Well then, since an unloaded gun is about as useful as a pecker on a priest, I guess you'll need a crash course. Follow me.”

He led me across the store and through a heavy wooden door to an adjacent building. The building was colder than the store and had a funny smell. Later I would know the smell as gunpowder. To say I was out of my element would be an understatement—I stuck out like a headless man in a hat store.

Ted explained to me that this was a gun range, a place for people to come and practice their marksmanship. Ten dollars for a half hour was the current rate, but freckle face was happy to let me shoot a few rounds for free.

There were six stations with a maximum shooting distance of fifty feet. Ted set my target up at half that. He showed me how to load the magazine, and then outfitted me with a pair of earmuffs and protective eyewear.

“Is all this really necessary?” I asked.

Ted pointed out the different parts of the gun and then took a few shots downrange to demonstrate.

I still didn’t know why I had to wear the goggles, but I was glad I had the earmuffs on.

Ted had put two holes in the paper man-shaped target right between the eyes.

Next, it was my turn. He handed me the gun.

“Always keep the safety on until you’re ready to shoot,” he said. “Did you pay attention to how I was holding it?”

He helped me into the correct position. “Go ahead and take the safety off. Then aim and pull the trigger. Try to hit the target in the chest.”

“Shouldn’t I try and hit the head like you?”

“No. The chest is a much bigger target, and just as effective.”

I took a deep breath and then pulled the trigger.

“Nice. Not bad for your first shot,” Ted said.

I had hit the target in more of the stomach region, but at least I hit it.

“The gun almost flew out of my hands. Is that normal?”

“You did okay. You just gotta get used to it. Every gun is gonna have a little kick, some more than others. It just takes practice. Go ahead and shoot off the rest of the rounds.”

I wanted to buy the gun that day, but Ted said I had to wait three days.

Three days later, I went back to pick it up. Over the course of the next few weeks, I would spend a lot of hours hanging out at Guns Unlimited. Ted was glad I hadn’t killed myself or someone else, and was just as glad to take my money to use the range. My speed and accuracy was improving. I was feeling more and more confident that when something
did
happen, I’d be ready. It was like preparing for a hurricane I knew was on its way; only instead of food and water, I wanted guns and ammo. It was only a matter of time.

Now, I know how all this must sound. But so that you don’t think I’m some psycho with an itchy trigger finger, let’s back up a little and I’ll explain how I came to need a gun in the first place. It’s (how do I say this?) complicated.

Loving Teacher by Jade Stratton
In the Moors by Nina Milton
Fear Me by Curran, Tim
A Thousand Cuts by Simon Lelic
Crime Seen by Kate Lines
The Goddess Legacy: The Goddess Queen\The Lovestruck Goddess\Goddess of the Underworld\God of Thieves\God of Darkness (Harlequin Teen) by Carter, Aimée
Omegasphere by Christopher John Chater
Kilts and Daggers by Victoria Roberts
Nearest Thing to Heaven (Maverick Junction) by Austin, Lynnette
RenegadeHeart by Madeline Baker