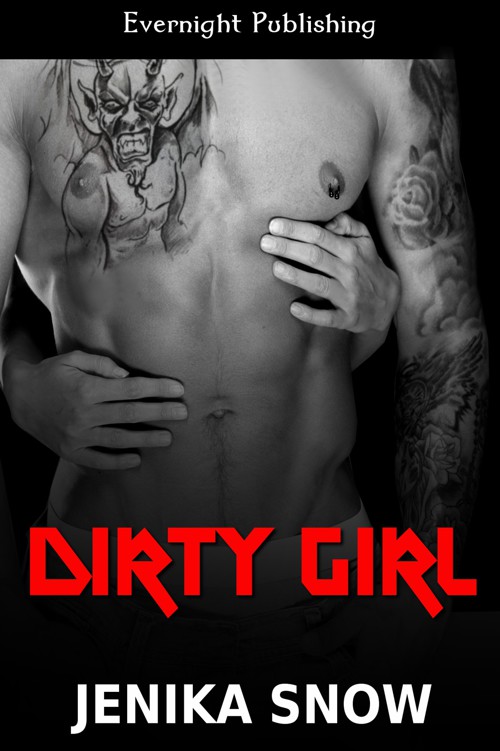 WARNING: The unauthorized reproduction or distribution of this copyrighted work is illegal.

No part of this book may be used or reproduced electronically or in print without written permission, except in the case of brief quotations embodied in reviews.

For everyone that wanted more from Inked. This is for you!

The sound of the tattoo gun buzzing and the sight of the needle going into skin, permanently marking a person, had a kind of calming sensation moving through
Naggie
. She pulled the gun away and ran the paper towel over the skin, wiping off the excess ink. The memorial tattoo she was giving this burly Marine was a tribute to his late wife. The stories that she heard while marking people up were both heartbreaking and uplifting. This particular session
was
in the heartbreaking category though, hearing
Kel
tell her about how on his last tour with the Marines he’d learned of his wife’s sudden and tragic death in a car accident. Their two year old daughter hadn’t been in the car—which he said he was thankful for tenfold—but it was so horrible to hear the pain in his voice. Life was short, that was for sure, and she never took any of it for granted.
Naggie
may only be twenty-eight, but she knew that life could be taken away before it really began, and that was thanks to a deadbeat mother and a father that had liked to practice his right hooks when he was drunk.

“I think we’re almost done here,
Kel
.” She added a little more shading around the eyes and leaned back to look at the image. The tattoo was of his wife, Marlene. She had a set of angel wings and looked over their daughter who slept. It was a powerful image, and it was moments like these, when she wasn’t giving her hundredth butterfly tramp
stamp,
or another koi fish on a hip, that made all of this worth it. Not to misunderstand, she loved working on each and every one of her clients, but it was these personal tributes, the one that split her heart right open, that made all of this worth it.

Kel
stood and walked over to the full-length mirror hanging on the wall across from her station. He turned to the side and took in the tattoo on his left shoulder blade. For several seconds he didn’t say anything and just stared at the ink.

“It’s good?”
Naggie
had been doing this for as long as she could remember. It had first started with her drawing on cantaloupes, and then moved to drawing on herself with markers, and soon she was interning at a tattoo parlor in the next town over. It was only when her boss,
Cadeon
Morris, had moved to Reckless, Colorado and opened up his tattoo shop,
Ipseity
, that
she had started working professionally as a tattoo artist.
Cadeon
was a typical bad boy in their small community, what with his ink and riding around on a Harley, but he wasn’t the only person known as “trouble” in town. The biker gang, The Vicious Bastards MC, also had a pretty hellacious reputation in town, but now that
Cadeon
was with the daughter of the president of said MC, she saw more of the outlaws.

She looked at
Kel’s
reflection again and smiled when he started to tear up. “Good?” God, she was going to start crying.

The big Marine turned and embraced her, and she felt her full five-foot-two height at that moment. Then again everyone was pretty much taller than she was. He pulled away, and she actually saw that he was crying.

“You are so welcome.” God, she was going to start blubbering like a fucking baby. He turned, and she glanced at herself in the mirror. Her hair was a little longer now, but still had the pixie cut style. She had naturally blonde hair, but liked to dye it
a platinum
color, or at least she had for the past several months. Maybe it was time for another change? Maybe she should just try her honey blonde color for a while? She turned away from the mirror and met
Kel
at the counter. After going over the aftercare instructions she said bye to him, but couldn’t keep the goofy smile off her face.

“You know now you get like that every time you do a personal piece?”

She glanced over at
Ziggy
and flipped him off good-naturedly. “Yeah, I know, but I can’t help it.”
Naggie
smiled wider at
Ziggy
. His Mohawk was blue this month, and when he turned his head to look at the door when the bell rang with a customer entering, she could see right through the plug in his ear.

“Hey,
Booshie
.”
Ziggy
stood straighter, and she glanced over to see the man in question walking up to the counter.

Booshie
, the VP of the motorcycle club in Reckless, grinned down at her. The Vicious Bastards MC was a force to be reckoned with in their small town, lethal and often had people crossing the street just to avoid walking past them.

“Hey, man.”
Booshie
and
Ziggy
clapped hands and did that half-hug thing guys normally do.
Ziggy
wasn’t a small guy by any means, but compared to
Booshie
he looked so tiny. Then again she supposed anyone looked small in front of
Booshie
, well, aside from other Vicious Bastard members, or even
Cadeon
.

“Hey.”
Booshie
grinned and did one of those chin lift things that, once again, guys tended to do in form of greeting.

“Hi.”
Naggie
was nervous, and she hated that feeling. There was just something about the way this man looked at people, or maybe it was just the way he looked at her? Over the past six months since
Cadeon
had gotten together with the daughter of Scars, The Vicious Bastards President, a lot of the bikers from the club had been coming to the parlor more frequently.
Cadeon
used to do a lot of ink for the bikers at their clubhouse, but since he was practically
family
now since dating Stella, a lot of the guys just came to the shop after hours.

Booshie
nodded. “Yeah, I spoke with him. He is getting ready for a week away with Stella, but I was kind of hoping to get some ink done while he is out.”
Booshie
lifted a dark eyebrow.
“If you’re game?
Cadeon
said you can do some wicked shit.”

Naggie
felt her cheeks heat, actually felt
herself
blush.
Cadeon
had always complimented her work, but for some reason hearing
Booshie
say it made her belly do this little flip. This was bad given the fact she was with Rob, and had been for the past year, but never had she felt anything like this. “Well,” she cleared her throat and willed her face to stop feeling like a fire licked across it. “I can probably do it later this week as I am booked for the next few days.” God, just thinking about being alone and so close with him had her face getting even hotter. This was bad, really fucking bad, but she just needed to get her shit together and keep calm.

Booshie
grinned, and for
such a rugged looking man that smile
totally transformed his face. He wore a dark colored bandana around his head, and his shorter dark hair brushed along his chin.
Naggie
had never been the kind of woman that was attracted to men who looked like
Booshie
, but she also wasn’t going to deny that every time she saw him in the last six months she realized he was all man. Rob was a good-looking guy, the type that she always went after. He wasn’t clean cut in the least, sported tattoos and piercings, and was not much bigger than she was, but he was safe.
But
Booshie
…
God, here she was staring at him as he shot the shit with
Ziggy
, and she couldn’t help compare everything about the biker to her boyfriend.
Booshie
had full-sleeved tattoos on both of his arms, and she could even see some ink peeking up from under the collar of his shirt. So, he was different from what she normally went for, but then again not too much.

Naggie
blinked a few times and realized the guys had stopped talking to each other and
Booshie
was now speaking to her. “Yeah, sounds good.” She got her composure back in line, and knew that she needed to act like a professional. This guy had to be almost twice her age, and she knew that with him being in The Vicious Bastards he didn’t have high standing morals when it came to making money, but yeah, she felt this raw desire for him.

Uncrushable (Forehead Kisses #3) by Abby Reynolds
Silent Scars (Surviving #4) by Ada Frost
Bonds of Fire by Sophie Duncan
Time Between Us by Tamara Ireland Stone
The Honorable Barbarian by L. Sprague de Camp
Claudius the God by Robert Graves
The Reaper: Autobiography of One of the Deadliest Special Ops Snipers by Nicholas Irving, Gary Brozek
Plight of the Highlander (The MacLomain Series: Next Generation Book 5) by Sky Purington
Bradley, Marion Zimmer - Shadowgate 02 by Witchlight (v2.1)
Dragon Song by Jordyn Tracey