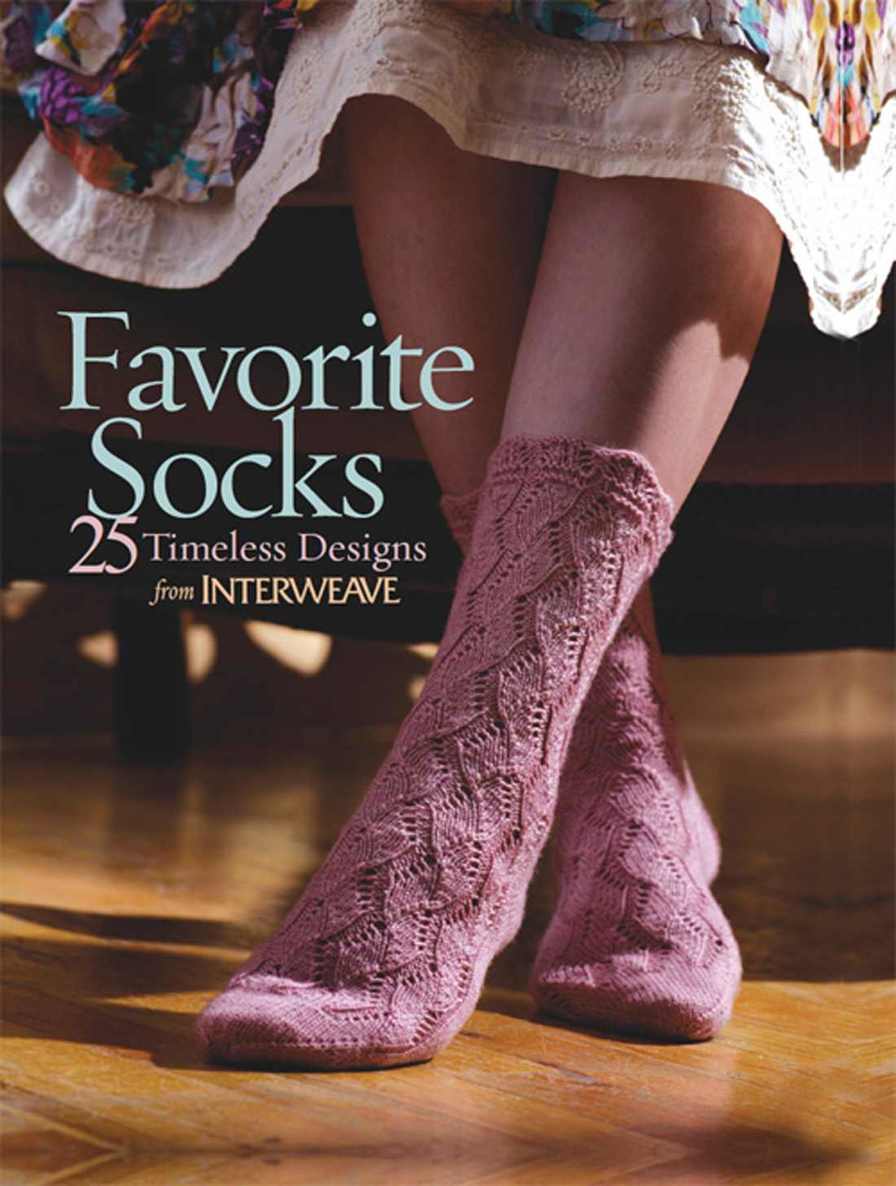 A
NN
B
UDD AND
A
NNE
M
ERROW, EDITORS

Go With the Flow Socks
{ Evelyn A. Clark }

In its first decade of publication,
Interweave Knits
has published dozens of sock designs. The second issue, published in the Spring of 1997, included our first sock pattern by sock designer extraordinaire Nancy Bush, a lovely pair of Estonian-inspired lace socks called Meida’s Socks. For the first few years, socks appeared sporadically, but soon we realized that these were among the most popular projects each issue. And why wouldn’t they be? Besides the practical benefits—socks are portable, useful, relatively quick, and almost universally wearable—there’s both luxurious pleasure and primal comfort in covering your feet (or those of someone you really like) with thousands of knitted stitches.

Interweave Knits
and other Interweave publications have offered patterns for knitted socks plain and fancy, eminently practical and arguably decadent, traditional and modern. These socks are made top-down, bottom-up, side-to-side, and in every stitch pattern imaginable. Over the years, many of these patterns have become unavailable as the original issues went out-of-print, although the socks themselves are timeless.

For this collection, we’ve chosen seventeen of our favorite designs, some of which were published before many current readers first picked up needles and yarn. You’ll find socks from old issues, like Meida’s Socks, and patterns from more recent issues. Even the most dedicated readers of
Knits
probably haven’t seen the Anniversary Socks, also by Nancy Bush, which appeared in the tenth anniversary issue of
Knits’
sister publication
PieceWork,
or the clever Two-Yarn Resoleable Socks from another sister publication,
Spin•Off.
And because we can’t resist an opportunity to create some new classics, we’ve included six entirely new sock patterns, so even if you have every issue of
Knits
since 1996, you’re sure to find new inspiration.

This blend of new projects and old favorites will keep your needles flying and your feet warm. Look through the pages of this book and share our wonder at the ingenuity of sock knitters everywhere.

Daphne by Justine Picardie
Skydancer by Geoffrey Archer
Auctioned to the Alpha: A SciFi Alien Mail Order Bride Romance (TerraMates Book 5) by Lisa Lace
7 Love Bites by Ellen Schreiber
Red Bird: Poems by Mary Oliver
The Undercover Playboy (Captured by Love Book 3) by Miranda P. Charles
The Lieutenant's Promise by Aileen Fish
Forget You by Jennifer Echols
The Unwanted Winter - Volume One of the Saga of the Twelves by Richard Heredia
Castaway by Joanne Van Os