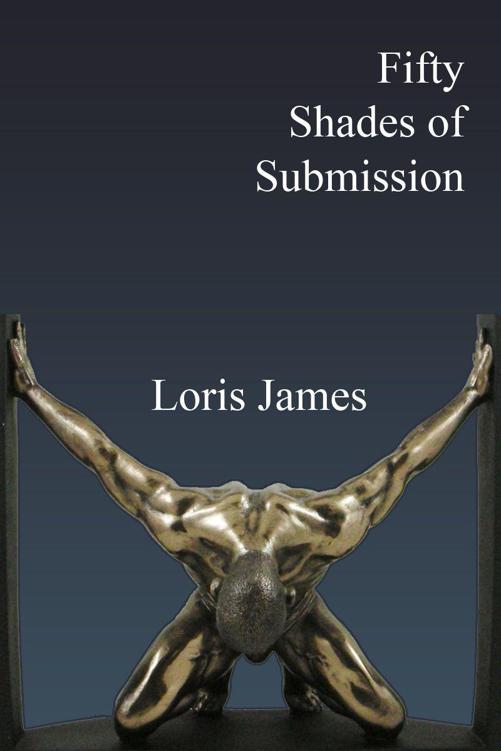 Fifty Shades of Submission
is a work of fiction. Names, characters, places, and incidents either are the product of the author’s imagination or are used fictitiously. Any resemblance to actual persons, living or dead, events, or locales are entirely coincidental.

"
The great object of life is sensation, to feel that we exist, even though in pain."
- Lord Byron

I am twenty-two years old, well educated, and I’m going to be a writer.

When I turned twenty-one I inherited my father’s vast fortune and business empire, but I have no interest in it. I have not touched a penny of his money due t
o the circumstances under which I left our family home when I was fifteen. From that time, till his death, we never spoke or saw each other again and I was rather surprised, after everything that had happened, that he had not disinherited me, his only son.

I have never had a stomach for business.
From the moment I received my inheritance I appointed a large and reputable firm of attorneys to handle my business. Thankfully, they deal with everything on my behalf and I am free to get on with my life.

I am alone in the world – without family or relatives of any kind, and I have decided to spend the winter in a small and remote country hotel in the mountains, shutting myself off from the world, reading books and thinking about the novel that I am planning to write.

I suppose I spend too much of my time reading but the habit started when I was a child.
My mother died when I was five, and my father dealt with his grief by immersing himself in his business and spending a great deal of time away from home. I think I reminded him of my mother because I look a lot like her – I have her fair hair and blue eyes, and the shape of my hands are identical to hers.

In my early years I was raised by
a succession of servants and nannies. They came and went frequently and I soon learnt not to become emotionally attached to any of them. So books became my friends, my family and my comfort.

This is not a very fashionable hotel
, and even in the full season of summer it is never full. It has none of the amenities of the more successful hotels in the area; there is no Olympic-sized swimming pool, or tennis courts, or golf course, or satellite TV - or indeed any of the modern conveniences expected of a respectable country inn these days.

I
t is out of season and I am the only guest, which suits me perfectly. I spend my days on the sunny terrace, immersed in my books and hardly see a soul.

Occasionally
, I get a lift into town with Mrs Wilson, the owner of the hotel. She’s a frumpish woman in her fifties with a taciturn manner and a permanent scowl. I think she distrusts people even more than I do – which in itself is not a very good recommendation for being involved in the hospitality industry.

She
goes into town once a week to stock up on supplies while Mr Wilson, her husband, holds the fort. I usually accompany her to get more books from the lending library.

She
is a terse woman of few words and we usually bump along the narrow dusty country road to town in her ancient pick-up truck in complete silence – which suites both of us. I get the feeling that she does not much like men in general.

Yesterday, i
n a drab and dusty antique shop in town, crammed with useless bric-a-brac, I bought a faded photograph of Venus, the goddess of love, on a whim. My father used to have a life-sized marble statue of Venus in his study when I was a child, and it reminded me of him.

When I got back to
my room at the hotel I put the picture on my bedside table, supporting it with a book, and looked at it.

T
he goddess of love is completely naked. She has full breasts and wide hips that are seductively voluptuous, and long flowing red hair that streams like flames about her beautiful face and body. She partially covers her breasts with one hand, and her female genitalia with the other. She is looking slightly downwards and the expression on her face is one of melancholy and introspection, as though reflecting upon all the loves lost and squandered by mortal men and women.

I
wrote the following words on the back of the photograph:

V
enus – goddess of love, sex and desire. The seductress and lover of mortals, embodying sexuality, temptation and sensual pleasure. Oh, to endure the love and sweet torment of a beautiful woman who treats me without pity. Like Samson, who put himself into the hands of Delilah, and kept his eyes fixed
upon his beautiful betrayer until the very end, drunk with rage and insatiable love.

I looked at the words and re
read them - sentimental romanticism? I smiled wryly and stuck the photograph in one of my books.

"
Thou art to me a delicious torment
." - Ralph Waldo Emerson

I breakfast in a shady garden alcove of climbing ivy that has been trained over a wooden framework on the hotel terrace just outside my room. It is pleasant sitting on the sunny terrace on a warm wintry country morning with nothing more pressing to do than simply indulge myself in my favorite pastime: reading.

Around mid-morning
an expensive German sports car arrives with its top down and pulls up in front of the hotel and a tall, graceful woman dressed in a long fur coat alights. She has red hair that catches the sunlight like fire, and is wearing large dark glasses that obscure most of her features. She begins to stride gracefully and confidently towards the hotel’s reception area, then turns her head and sees me. She pauses for a brief moment, looking at me, before continuing on her way into the hotel.

A while later Mrs Wilson appears and asks if I have something to read for the new guest. A spare book perhaps?

“
The one who checked in this morning. She says she’s a widow. Apparently her husband died recently of some illness. She’s come here to recuperate. She says she needs peace and tranquillity to recharge her batteries.” Mrs Wilson scowls as though she disapproves.

“She’s staying for a while?”

Mr Wilson shrugs. “She says she may spend several weeks here. Like you.” Her last words seem like an accusation. She and Mr Wilson probably like to have the place to themselves over winter.

“Well,” she prompts impatiently. “Have you got something for her to read? “

Happy to oblige, I
go to my room and gather up a couple of volumes and hand them to her.

The new guest did
not show herself at dinner tonight. As usual, I dined alone in the hotel’s drafty and antiquated dining-room with its dark wood-panelled walls and dusty ceiling fans and dreadful floral carpet. The room smells of stale cooking - a residual of thousands of meals served over a number of decades. The one redeeming quality is the huge inglenook fireplace that hosts a cheerful fire every evening, warming the room considerably and even giving it a somewhat cosy feeling.

The Bride Wore A Forty-Four by Maggie Shayne
FILTHY ENGLISH: Romantic Tryst - BOOK 1 by Danielle Greyson
Enemy One (Epic Book 5) by Lee Stephen
Hannibal by Ernle Bradford
Outside Beauty by Cynthia Kadohata
Like Father by Nick Gifford
The Tiger-Headed Horseman by Chris Walker
Poppyland by Raffaella Barker
Little Death by the Sea by Susan Kiernan-Lewis
The Clause by Brian Wiprud