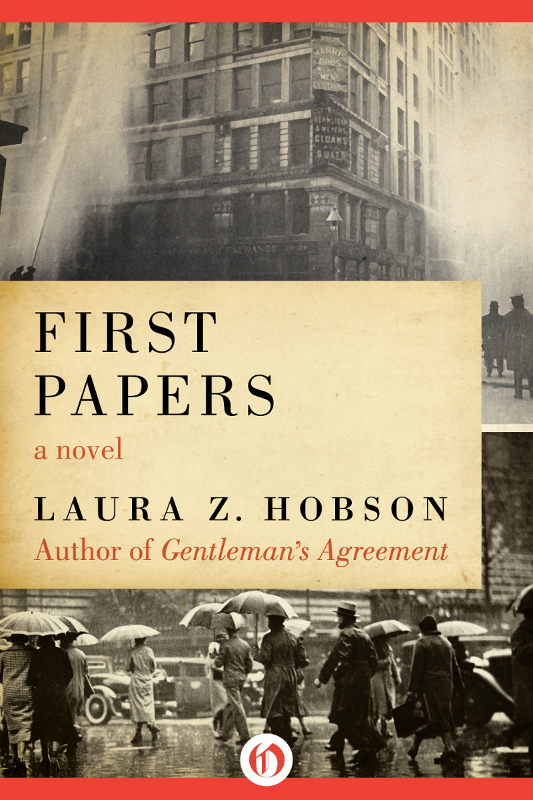 In memory of my parents

O
N A BARELY WOODED
and sparsely settled hill in the town of Barnett, Long Island, there stood a tall narrow house whose encasing shingles had not yet attained the soft greyness of weatherbeaten wood.

In daylight this house had a faint peach tinge; by night it was the color of wet sand. Built upon a bank of ground sloping sharply back from the sidewalk, it seemed to perch above the pavement, to draw back from the street. In this house lived Stefan Ivarin and his family.

Although half a dozen other small houses had sprung up at about the same time on this same hill, the Ivarin house did not share their neat suburban mood; rather, its structure and character proclaimed a lack of kinship, a wild originality of its own.

Stripped of its embellishing porches, stuck here and there like afterthoughts to break the severity of its outline, the Ivarin house would have emerged as a thin rectangular box, topped by a shingled roof also sloping sharply back, also tall and narrow, its line broken only by a bay window that jutted forward from the roof like a blunt, square nose from a receding brow.

Of porches there was a profusion, two in front, one behind, elongating the house still further, and a stoop at the side entrance. The front porch had slender white posts and no railings; upon its back, in the center, it bore a small square sleeping porch with stout square posts, heavy enough to dwindle the posts below to the semblance of tall white pencils.

The ground on which the house stood was nearly nude of trees, though between sidewalk and curb there were three young maples, still bare though it was early spring. Wires ran from their trunks to pegs in the ground, to support their frail growth against the hill winds that swept across from Flushing Bay, several miles to the north. In the back yard stood a pear tree and a peach tree; the ground there was laid out in the patchwork squares and oblongs of a vegetable garden.

It was at three o’clock on a morning in late March, in 1911, that Stefan Ivarin paused before his house, and drew from it the first sense of peace he had known in all that fearful evening. It was no hour for reflection, yet he stood looking up at it on the rising earth, grateful that he could for a moment forget holocaust and horror. The house had been built two years before, and he himself had been its architect. By profession an editor, lecturer and teacher, he had for decades pursued his hobby of original mathematics, and during the first discussions about building their own house, a year before they were ready to consult an architect, it had seemed easy enough to rough out sketches of rooms and halls and porches, with his wife Alexandra and the children watching him, offering suggestions.

There had been no specific moment when he had decided, We do not need to consult an architect; I will be the architect; this is one way to save money. Those early sketches had revealed how simple, how almost primitive, were the undemanding feet and inches of an architect’s plans. All he needed to master were some clinical details about drainage, the heating plan, the electrical system.

And as the plans developed, it had begun to seem natural and just that the first house he had ever owned should be designed by himself, be the creature of his own being, an extension of himself, as were his children or his editorials. Perhaps, like any wife, Alexandra had had misgivings, but with them, the wisdom to silence them, at least at the beginning.

It was only later, when his minutely accurate plans were ready to be translated into builder’s blueprints, that she had begun to attack them. Then had come endless discussion, week after week, about matters of looks and convenience; the children had joined in, each offering an objection, a desire, a longing. Even Fira, the baby of the family, had spoken up, vociferous about the stairway.

“I don’t
care,
” Fee had cried out in defiance, “nobody else has the stairs going up backwards.”

He could hear the high excited voice still, and his own burst of rage at all of them, at Fira and Francesca and their mother. Eli had been indifferent, and therefore neutral; but the others were bent on deviling him, wanting only to tear up his months of work and turn to some unimaginative businessman who called himself an architect instead of a sausage maker.

It had been a bad time, a time to forget. Irritability was his fatal weakness, the Greek tragic flaw within him, which the world of his public life knew not at all, and which his private world suffered from too often. If science had evolved some healing drug for the bursting vessels of his equanimity, how gladly he would have become an addict to it, to spare himself the sight of hurt on Alexandra’s face, or fear on the children’s.

Neither she nor they could fathom the depth of his remorse after one of his outbreaks, nor suspect the self-laceration that followed. About such matters he could not speak; the apology, the abjectness of confession, mended nothing and destroyed something further in his own tissue.

Yet, without passion, he had told himself often, no man rises far above the level of beast or peasant. Placidity was not for the fighters of the world, not for those in the vanguard. To have been a revolutionary at sixteen was no preparation for an equable temper in middle age.

And he was fifty, and beginning for the first time to feel, if only occasionally when he had remained too long at his desk or lectured too heatedly to a large audience—beginning to feel a diminution of his energy and strength, the first sad lessening of himself as he had always been.

I must get more rest, Stefan Ivarin thought an hour later, and mechanically pulled his old silver watch from his pocket. It was past four, no unusual hour for him if he had been waiting for the fever of lecturing to drain away, but later than normal to be writing. An exhausting, shocking night altogether, with the news of the fire stunning the whole world of labor. The editorial he had written at the office for tomorrow’s paper was hardly better than reportage; he had ordered a Night Extra with the first terrible list of names, and he had written the editorial in minutes snatched from getting it to press. There was nothing of stature in it, but he had made up for it now.

For the third time he reread the pages on his desk. After the first paragraph, there was hardly a change or an interlineation.

To put off writing it until the sensible hours of tomorrow had been impossible, just as it had been unthinkable to leave the office until the final toll had come in. The figures kept changing; even at the end thirteen lives were still in doubt, and in God-knew-how-many hospital beds, where the “rescued” clutched with charred and blistered fingers at the last red filament of life, further change was still in the making.

Throughout the afternoon and evening he had felt chained to his desk, a prisoner in a cell of horror and rage. Since the
Slocum
disaster, New York had known no such holocaust, but the
Slocum
was an excursion boat for schoolchildren, so the city could unite in its grief. This time, with labor involved, a thousand attempts would be made to silence the outcry, to stifle the critics.

The attempts will fail, he thought; it’s a free country, and labor’s voice will be heard. There are those to speak and those to listen and no Siberia to swallow up either speaker or listener.

He folded up his pages, and crossed to the single window in his small room. In the unseasonable cold, the stars shone like ice; the heavens had always moved him, as the purity of mathematics moved him. In his youth when he had found his thoughts studded by sentimentality and superstition, he had often felt that his destiny had been written in those heavens which were shared by his two countries, his native land and his true beloved land. Had he not been born in 1861? Surely, he used to feel, the star of emancipation was high and bright in that year of my birth: in Russia, the Emancipation of the Serfs; in America, the Civil War that was to win the Emancipation of the Slaves.

Emancipation. A beautiful, a noble word, five syllables ringing with every concept of humanity and justice. A lofty music the whole world would one day hear.

He turned away from the window and glanced once more at his desk, as a lover looking back for one last glimpse of his beloved. Two days ago he had found deep gratification in the editorial he had written about the college in Virginia and the history book; the day before that, in his piece about Sir Edward Grey’s speech on the armament race in Europe, and a day earlier in the one about the new association for “the advancement of colored people,” in which he had challenged its separateness. Poverty was poverty, neither white nor black but poverty-pale, and the drive to end it and advance people should be one drive, undivided, unsplintered.

All three had been strong pieces, work to satisfy a man. But tonight’s editorial on the fire had a greater immediacy than any of these. It belonged on the front page, not inside; he would order the make-up man to box it next to file news story. The English-language newspapers did that, and there was no reason why the
Jewish News
should not. Another step in Americanization.

Stefan Ivarin stretched and yawned. A strange happiness coursed through him; he had written powerfully in the universal language. Not English, nor Russian, nor French, nor Yiddish, but that international language, the language of protest. In the morning, he would show it to Alexandra.

Too bad she was not awake now. His throat was parched and his tongue burnt; a glass of tea would be agreeable above everything else. Talk would be welcome also; despite his writing, he still felt choked with the need to talk.

Let her rest, he thought, and began to undress. On his desk the ashtray caught his eye: dead stubs crowded it to its rim. The longing for tea, then, was not an excuse to delay going to bed; his throat had indeed been burned dry. He had not been conscious of making so many cigarettes, nor of smoking them. His powers of concentration, at least, were as undiminished and fierce as ever.

I am still concentrating, he thought, still writing phrases in my mind; while this goes on, I would not sleep anyway. In his fingers, he could feel the sting of a scalding glass, in his nostrils the astringent aroma of fresh tea.

Why not? Why this Calvinism that made him fight his longing? He glanced about the room for a moment, peering through his thick glasses, as if looking for some palpable answer to his question. He had already taken off his suit and shoes and shirt, as well as his stiff open-gullet collar and the necktie that lay around its base on the outside. He moved toward his green flannel bathrobe, then veered away from it and went downstairs in his long-legged, tight-sleeved winter underwear and his heavy socks.

He moved softly, thoughtful of the four sleepers upstairs and Alexandra in the small extra room below. As the kitchen light went on, the dog, Shag, began to bark in the back yard, but Stefan recognized the desultory note that meant it would soon cease, and he stood still, waiting for it to end.