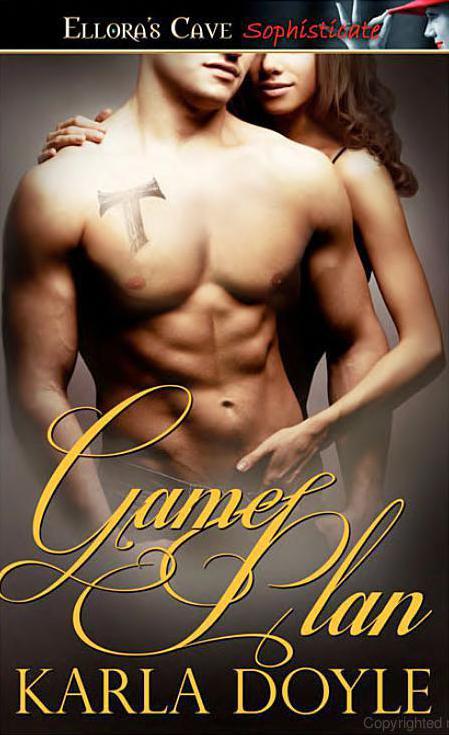 Mason had to meet the sexy woman at the ball diamond. The chemistry between them is instant and completely addictive. Andie is more than beautiful, she’s uninhibited and independent—totally unlike the needy twenty-somethings he’s been dating since his ex-fiancée deceived him five years ago. And yeah, Andie is ten years older than him, big deal. The more they’re together, the more his heart wants her as badly as his cock. Too bad Andie isn’t playing for keeps.

For Amanda, for always, always believing in me. (Also for being nitpicky and pushing me when necessary!) I am so lucky to have a cheerleader like you in my corner.

For Todd, my personal hero, for your love, support and tolerance. Thank you for always giving me the freedom to make my dreams come true.

And for Grace, my fabulous editor and an amazing person. I wouldn’t be here without you.

“Scott’s really working the team spirit today with that kelly-green golf shirt buttoned up to the eyeballs.” Lasha sniggered as she pointed to the opposite set of bleachers.

“It’s been what, two years now? Your ex needs to get laid so he can get over you.”

The trouble with that theory was Scott’s indifference to sex. A concept so foreign to Lasha, she’d obviously blocked it out of her mind. Andie cocked an eyebrow at her best friend.

“Right. The only briefs Scott likes to dive into are legal ones.” The focus switched as Lasha checked Andie out, head to toe. “You’re the one who needs to up their nudetastic action quotient—
from zero
. That’d throw Scott off the reconciliation trail.”

“I’ll get there,” Andie said, at which Lasha rolled her eyes. “I
will
, eventually.” With any luck, before her lady parts shriveled up. So far, though, she hadn’t met anybody she wanted to go out with. Or plain old hit the sheets with. Really, where did forty-year-old, barely divorced moms go to meet available men? The idea of cruising clubs and bars at her age gave her the heebie-jeebies. And there weren’t a lot of prime candidates at parent council meetings. The two males present last month had passed their best-before date a decade ago. She probably shouldn’t be so picky, but since she had no plans to get serious at this point in her life, if ever again, settling for a soft-bellied man with a decreasing libido who excelled at intellectual conversation wasn’t happening. She’d had one of those.

Lasha wandered off, searching for her next sexual plaything, most likely. Dylan left the on-deck circle for his turn at bat. Andie rose from her spot at the end of the front row bench and laid on the hooting and clapping. Her son looked over his shoulder and rolled his eyes. At twelve, Dylan rode the line of being glad for his mom’s attention and wishing she’d blend into the crowd like
normal
mothers. As long as he still smiled at her antics, she wasn’t about to give them up. This season, he remained her little boy.

And damn, the boy could hit. His worm-burning line drive zipped past the first baseman and found a home halfway into the outfield. Dylan rounded second, had a look, thought better of getting greedy and dove back to the bag. He’d be proud of those bruises tomorrow. Cheers and whistles filled the air as she watched her son brush dust off his knees. The noisy fans all but drowned out the warning she heard a second too late.

“Ow—what the?” She grabbed her ankle, hissing at the heat spreading above the bone. Everyone around her remained focused on the game. Nobody had noticed her crumple in pain. Not even Scott from across the diamond, even though he’d barely taken his eyes off her for five innings.

She eased onto the bench and rolled her leg sideways. A baseball-sized welt had already formed above her right ankle. The foot she used for sewing. Terrific.

“Apparently you need to get a better set of lungs, because I didn’t hear you.” The snarky response left a bitter taste in her mouth. “Sorry, that’s the pain talking, not me. I’m not always a bitch.”

“No worries, I get it. Taking a hit stings. It’s my fault anyway. I shouldn’t have drilled the ball that hard on the sidelines. Here, lemme take a look at that ankle… Damn, it’s rising faster than a twenty-year-old virgin getting a lap dance.”

Andie’s first thought was that the guy needed to shut up, there were kids nearby. Her head snapped up to tell him so and the thought fell away. Kneeling in front of her was what could only be defined as a prime candidate. Full head of light-brown hair with exactly the right amount of messy, incredible blue eyes and lips designed for making out. And since the buttons on his baseball shirt had been neglected, Andie was treated to a view of one spectacular naked chest.

“I take it back, your lungs look fine,” she said, and clapped a hand over her mouth. Major slip of the internal thought process.

The hunk looked up at her, totally amused. “They do, do they?” He scooped her foot into his hands and placed it on his thigh as he examined her ankle.

Strong fingers gently but thoroughly traced over her flesh. Yes, he was merely checking for damage he might’ve caused. It was still the best contact she’d had in forever. Her own hands got the job done, but they didn’t send a thrill through her system. Thank god she’d shaved her legs this morning. Not that he’d notice or care.

Andie’s mind headed for the scenario he’d mentioned. Except she became the dancer, gyrating over the bulge in his lap. And he was no virgin. Uh-uh. In her version of the strip-club seduction, the athletic stud beneath her was a sexual MVP.

“It’s not serious, but it needs to be iced.” The deep richness of his voice yanked her out of the premium-grade fantasy. “You bring any ice packs?”

She swallowed and shook her head. No way could she speak to him again. Not after telling him his chest looked good, and especially not after picturing herself grinding onto his cock. God, her face must be beet red. The way he grinned—he had to know. Oh, but he was pretty. And much younger than her. Too young for her to be picturing naked and sweaty.

Lasha slid in beside her. “Who in the name of tasty treats was that?”

“Just some guy who hit me with a ball. A case of being in the wrong place at the wrong time.”

“Just some guy, huh?” Lasha raised an eyebrow. “So switch places with me. Maybe I’ll get lucky and be in the wrong place too.”

“You don’t want one of these.” Andie turned her leg so Lasha could see the now-monstrous bump.

“No, but I’ll take one of those.” Lasha nodded toward the pure testosterone jogging their way. “I wouldn’t mind if he groped my leg like he did yours, or looked my way with those come-play-with-me eyes, either.”

“Shut up, he’ll hear you. There was no groping. No bedroom eyes. And he’s too young.”

“Why don’t I go watch your offspring kick some tween butt until you’re strong enough to stand on that horribly injured foot.” Lasha moved off as the baseball hottie dropped to his knees. “Make sure you get his number, Andie, in case you need him to reimburse you for crutches or something.”

Later, she would kill Lasha for embarrassing her this way. Right this minute she had better things to do. Like soak in every detail of the specimen kneeling in front of her. Nice, round muscles filled out his shirt. Great shoulders and pecs did it for her in a big way. This man had both going on. He lifted the injured leg to his lap again, seating her foot on the fly of his uniform pants. She stared at her toes, willing them still, when all they wanted to do was jump free of their strappy sandals and wiggle against his crotch. Good god, she needed to end this before she did something stupid.

“That’s cold.” Reflexively, she tried to draw her foot away. He held it and the ice pack in place while looking up at her. With his level of hotness, the ice would be water in minutes. Boiling, even.

“Your friend is right, we should exchange numbers.”

“I’m not going to sue you for the price of ibuprofen tablets, don’t worry.” The motion from his chuckle shifted his shirt. A hint of ink on his finely shaped chest peeked out at her. Tattooed men ranked highly in her personal fantasy time. Bad, meet worse. She was so toast.

And things just got toastier. “Not your size, sorry.”

“I prefer them on you.” He winked and swiped one finger across the high-gloss, hooker-red polish on her big toe. “You have very pretty feet. Nice toes.”

“Thank you, I grew them myself.” She hadn’t flexed her flirt muscle in years, but it sprang into action. Pheromones and adrenaline rushed her system, sending heat to her unmentionables and a chill to her nipples. Strange how the body worked. And utterly fantastic.

After inspecting her toes and the injury a couple minutes more, he met her eyes again. “Keep the ice on for ten minutes. I’ve gotta go, I’m playing on the other diamond and my game is about to start. But you should call me later. For ibuprofen, cold packs, a foot rub, whatever you need. I deliver, 24/7.”

“A foot rub—are you a registered massage therapist or something?”

“Strictly amateur. But I do more than feet, and I guarantee satisfaction.”

Well that about sealed it. The toys were coming out tonight. The big ones. “Thanks, but I think I’ll survive.”

“I’m going to worry about this beautiful foot unless I see for myself that it’s improving.”

Andie couldn’t take her eyes off his mouth as it stretched into a glorious, open grin. He had nice, straight teeth. Really white too. Probably a non-smoker, one of the criteria on her wish list. She had no business sizing this guy up. He couldn’t be more than thirty-two. Thirty-three at most. Way too young for her.